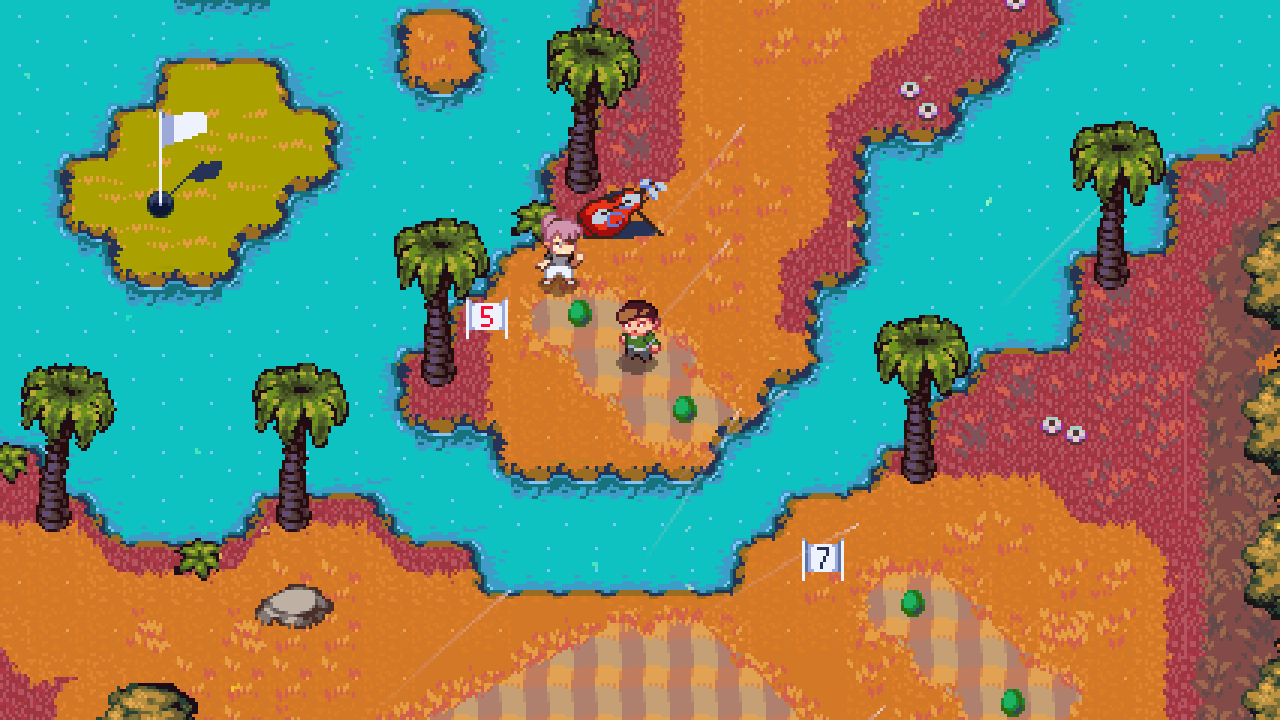 Golf Story really is a must have for any fan of golf games, but as an RPG fan, this indie title only comes in at par.

Few things excite me more than pixel art role playing games–they are my aesthetic, they are my genre, and after a long period of scarcity, they’ve been making a comeback. I literally cried out with excitement when a Nintendo Direct gave the world its first look at Golf Story, a pixel RPG which replaced the battle mechanics which are so common within the genre with golf swings. Switch in hand, I dove into an adorable pixel world, discovering a world of closely-packed golf courses, werewolves, ball-relocating birds, beaches, snowstorms, murder mysteries, and living skeletons that make up this entertaining, often confusing, but none the less charming game.

It should be obvious from the name itself, but it is worth repeating: There’s a lot of golf in Golf Story. Regular golf. Disc golf, lawn bowling; golfing on various themed courses, on driving ranges, solving problems by hitting other characters in the face with a golf ball, throwing trick shots, bouncing balls off the shells of turtles, golf factors into every aspect of this game. The basic mechanic are simple enough to master, and even I, someone incapable at and generally uninterested in sports games, was able to master swings and drives. That said, some of the mechanics are challenging, (I still don’t know how to reliably putt) but others are downright atrocious.

While the ‘hot potato’ shot, where you throw the ball with the Y button, and swing at it ‘at the right moment’ using the A, button felt more like a matter of luck than skill, the disc golf mini game was something akin to digital torture. While golf swings in the game are controlled through a combination of aim, precision, strike location, and a power meter, disc golf begins with a powered throw, then switches to the use of psychic powers where you use the thumbstick to change the direction and height of the disk while in flight. These controls are touchy, unreliable, and the directional controls seem to change based on which direction your character is facing.

Advancing through the game requires you to face a number of golfing challenges, spanning all of the forms mentioned above, and you are given a set number of chances to meet the goal. You are able to retry any challenge any number of items until you complete it. However, with no way to skip frustrating challenges and no clues given as to how to better complete the challenges, these become tedious incredibly quickly for those who don’t obsess over mastering the perfect swing. Progress through the story is consistently blocked by tests of skill as well as numerous fetch quests, which sometimes feel like chores, especially at the beginning of the game.

I found these frustrations compounded by several glitches, two game crashes, and missions which often had unclear objectives, and found myself turning to Google and Reddit for information on how to progress again and again–and I wasn’t alone. It feels like Golf Story was written by one person or a very small team of people, all of whom knew how the story was going to play out; when you know where you need to go, the leap in logic is easy, but when provided only with the information and prompts in the game itself, it’s easy to get stuck over and over again. For example, I spent half an hour exploring every inch of Wellworn golf course, after having been told that someone from there stole an item from Lurker Valley, only to find out that the item had been in Lurker Valley the whole time.

All of that said, Golf Story has an incredible charm that makes these frustrations worth powering through. The plot, while not anything revolutionary, is very entertaining. Combining the bizarre with the mundane and sprinkling humor throughout, the story keeps the game marching ever onward, sending you to new locations, looping you back to replay familiar courses with a new challenge, and bringing you face to face with new characters and mini games.

The world map isn’t very large, but every location is filled to the brim with unique personality and surprises. The game may be entirely devoid of voice acting, but the dialogue delivery is the best I have ever experienced. The text itself has an emotion, a personality, with the size growing or shrinking, the speed increasing or decreasing, bubbles shaking, shrinking, or slumping to one side. Sarcasm, in particular, is brilliantly delivered and easy to read, even without a facial expression to tip you off. The main game offers around 20 hours of gameplay, but those who want to set every record, unlock every secret and beat every challenge will find several more hours of gameplay. The Quick Play option also adds a great deal of easy-access golfing goodness, including Galf, a DOS-era minigame, for those who just can’t get enough virtual golf.

Golf Story is held back by a number of mechanics, some of which are not very fleshed out or enjoyable, the occasional glitch, and lots of quests which require skill and control of the game's often shaky mechanics. The story is entertaining enough, but the real charm of this game is the hilarity of its characters characters and dialogue. This really is a must have for any fan of golf games, but as an RPG fan, I thought this indie title only came in at par.