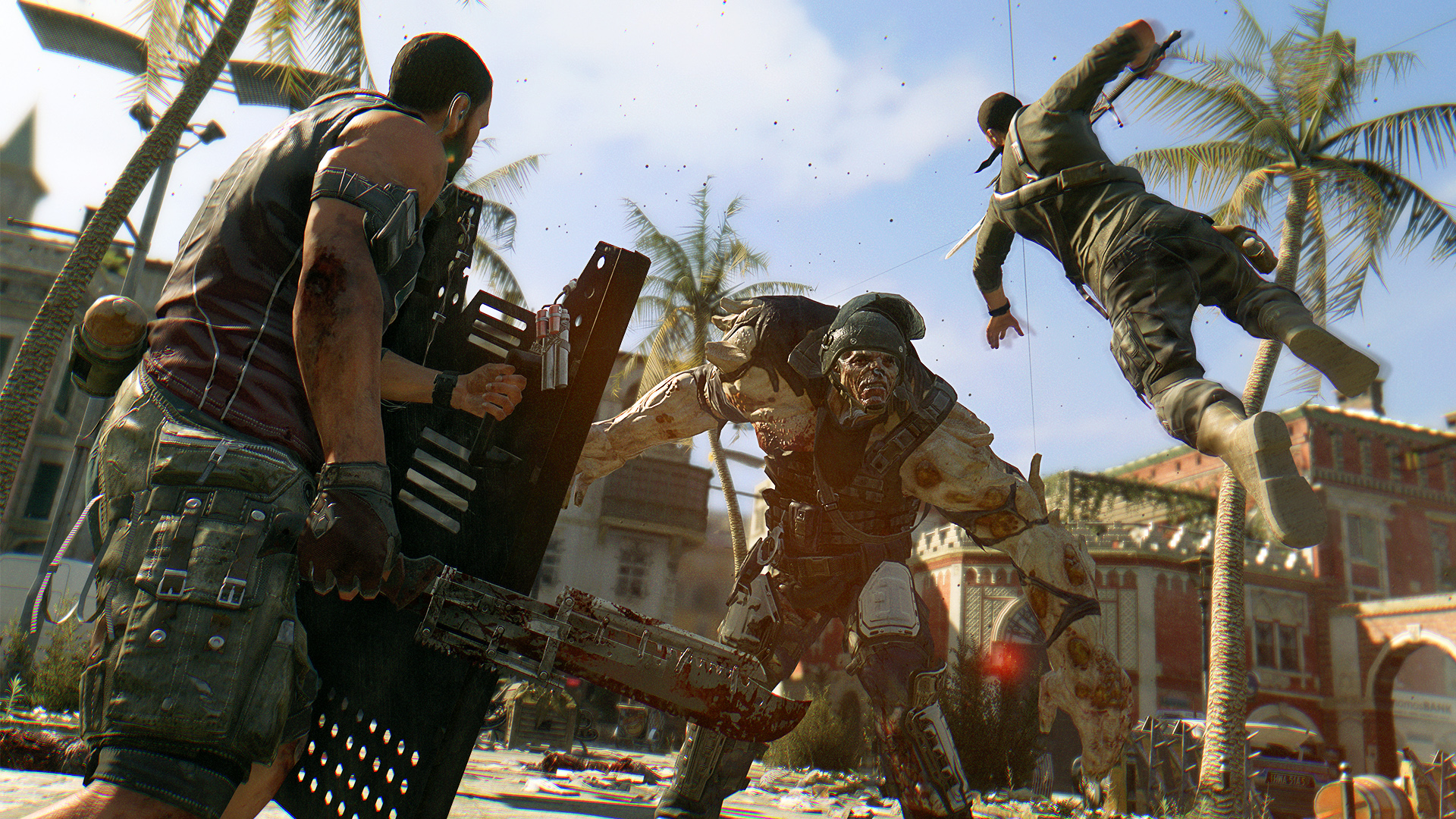 Making a zombie product relevant in today’s video game market is very difficult, but Techland did just that in their 2011 release, Dead Island.  Their first foray into zombie violence focused on their analog combat that allowed you to attack specific parts of the body in hopes of weakening the enemy. It also freshened up what seemed to be a very tired formula. While there have been some Techland zombie releases since the original Dead Island, none have come from  the original Dead Island team. That team has gathered back together to make one more leap into the open-world zombie market in their new release entitled Dying Light.

The hook this go around comes in the form of something very different from combat– parkour-infused movement. In many open-world video games, you run into the issue of navigating yourself to and from objectives simply is not fun. To rectify that, Techland has given us free-running movement reminiscent of Mirror’s Edge. From the beginning of the game you are introduced to these mechanics by forcing the player to run across a crane on top of a tower, as well as a sequence which finds you following an ally through various obstacles.

These sequences do a tremendous job of acquainting you with mechanics that, for the most part, work as intended. Within a few hours you will find yourself vaulting over obstacles and sliding under low hanging barriers. Easily the most enjoyable part of the parkour within Dying Light comes when you are leaping from building to building, climbing onto balconies and hurling yourself between far-off platforms. While doing this, everything begins to click and you enter a sort of amazement at just how fluidly you are moving. It does exactly what the mechanic should; make you forget you are simply running from one mission to the next.

The biggest issue with this new mechanic arises when you are forced to climb buildings. Doing it once or twice would be perfectly acceptable, but Dying Light leans on climbing a bit too much, especially in the later half of the game. While grasping one ledge and leaping to another is not particularly frustrating due to the tight controls, first person platforming has never been an enjoyable thing. This unfortunate trend continues in Dying Light as you will run into rooms that force you to climb in a specific path to grab onto a specific ledge and ultimately leap onto a specific platform. One misstep leads you back  to you beginning all over again, grasping your controller in frustration that should never be prevalent in a game so focused on ease of movement. That being said, when the movement clicks just perfectly, it is some of the best ever found in a game. If only that momentum was not neutered during the occasional forced climbing section.

As for the narrative  found within Dying Light, you are Kyle Crane, an agent sent into a zombie-infected city by a government agency in hopes of helping the citizens and stopping the spread of the virus. Of course, that is far from the whole truthas you soon find out the GRE (the aforementioned government agency) is not giving you the complete picture, and may have some nefarious ideas for the virus. You also fall in line with a group situated in a large tower, filled with some hard working folks just trying to live day to day in hopes of somehow getting out of the city. The main storyline thread never becomes anything interesting and continues upon its generic path for the entirety of the game. That being said, there are some pretty solid characters established throughout the game, they just don’t have a solid storyline to get a foodhold.

Thankfully, some of the side missions become very entertaining as they will highlight specific characters and enhance their traits. Instead of forcing you into derivative tasks, Dying Light’s side missions will at times present their own story thread and guide you through it, something side missions are supposed to do but often fail to achieve. Because of this, taking on these side missions can feel more important and easily more exciting than some of the story missions. Whereas the main thread can, at times, force you into some enclosed areas, many of the side missions involving exploring the rather beautiful yet decrepit world Techland has built in Dying Light.

The visuals in Dying Light are one of the most consistently impressive things to be found within the game. You run into multiple cityscapes, some larger than others, with their own recognizable features that are beautifully presented. Despite the dour atmosphere, Dying Light uses bright colors to illuminate certain aspects of the city that ends up working flawlessly. It does possess quite a bit of film grain, but never enough that it becomes too distracting. The only real complaint is that frame rate drops do occur when you get around eight or so enemies on screen. This is  very frustrating in this new future where we expect quality visuals, high resolution, and a stable framerate from every “next generation” game.

This being a game from the folks who gave you Dead Island, one would expect the combat would be very brutal and satisfying. Unfortunately, only the former is true a majority of the time. Techland has removed the analog combat found within Dead Island, and instead replaced it with a more simple melee mechanic. This makes attempting to take down the zombies very one dimensional as you aim for their head and just slam R2/RT over and over until the zombies skull explodes. As you progress, you do unlock other combat mechanics which can be interesting to mess with, such as the ability to slide and kick zombies’ legs, knocking them down. Then as they lay on the ground, you can execute them with a swift stomp, again, if you have the skill unlocked. Even when you do progress further down the Power (combat) skill tree, the combat never recreates the odd joy found in breaking individual zombie limbs in Dead Island. Instead, you just find yourself doing your best to avoid any interaction with the infected.

Fortunately, one thing that is retained from Dead Island is the weapon variety. You will find a ton of cleavers, wrenches, bats, police batons, and, of course, some firearms. You can then outfit the melee weapons with upgrades that add damage bonuses like electricity, bleeding effect, etc.  You can get these upgrades through crafting with many of the items you find strewn about the world in car trunks, closets, and other areas. The crafting mechanics remain very solid and satisfying. Few things are more enjoyable than desperately needing a Molotov (as we all do on a daily basis) and realizing you have just the right amount of material needed to make a few.

Apart from the Power skill tree, you can also level up your abilities to sprint and move about the environment with the Agility skill tree. You level this ability up by doing exactly what you think, hopping between buildings and climbing over things found within the world. You will earn a set amount of XP for how well you navigate your way around the world. This leads to some of the more exciting upgrades such as being able to climb and run faster, which proves to be very useful in the late game. You can also decrease fall damage, among other things. Your main skill tree is called Survivor and can lead to some big upgrades such as being able to create a grappling hook. The best way to increase the amount of XP you earn is to perform actions during the night.

Dying Light features a 24-hour cycle that features a hellish night that sees a rare, very powerful species of zombies come out. The creatures are called Volatiles and can kill you in a few quick strikes. They are also very fast, and if you get too close to them, they will make eye contact with and begin to chase. Once that happens, you must sprint away in hopes of breaking contact with them long enough to finding a safe zone to hide. This can be a bit troublesome as platforming in near pitch-black darkness (apart from the shine of your flashlight), is less than ideal. Seeing the entire area around you can be key in pulling off some impressive parkour action. This is a great idea, and it was probably the intent to make it difficult, but the execution is just a little off.

Dying Light has put some attention on its co-op, despite it not being the focus of the game. It allows for you and three other folks to traipse around the Dying Light world and chop up zombies together. While roaming around, the game will present certain challenges for you and your friends to compete in such as “who can kill more zombies.” One issue with the co-op is that playing with random people feels next to impossible. In order to start a mission, you must all be together at the mission beginning, meaning if someone is off doing their own thing, you have no choice but to chill out and hope they come to where you are. This arises mainly because very few people play with a microphone; so ordering them to do things is not really an option. Of course, if you are playing with friends, this issue goes away and the co-op can be exactly what you want it to be, you and friends parkouring your hearts out and busting zombie skulls.

Excitement was high for Techland’s full Dead Island team to put a new game, and for good reason. They are clearly a group of very talented individuals that know how to create some enjoyable gameplay mechanics. In Dying Light’s situation, their great mechanic, the free running movement, can be overshadowed at times by climbing frustrations. It feels as if they need to take the ideas from Dead Island and Dying Light and mesh them together into a wonderful product. Dying Light features some truly serene moments as you glide from building to building, but once that serenity halts, so does the player’s enjoyment.