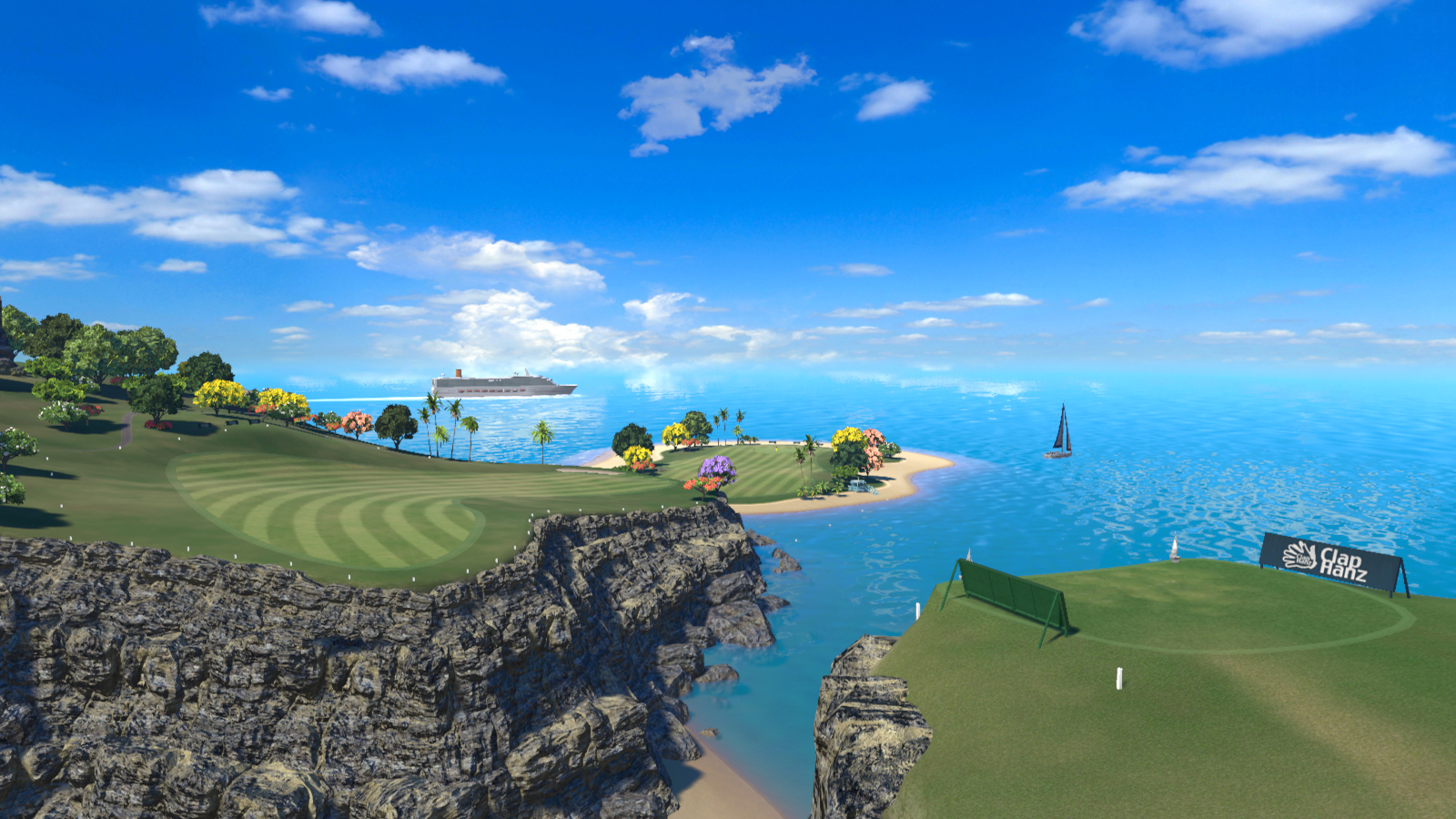 I’ve tried playing golf for real a few times in my life. I can see the appeal of the warm sun and the challenge of the beautiful carefully-sculpted courses stretching out before you. As a massive storm beats down over my house in Texas, I’m reminded that not every day is a good day for golf. Well, there’s one way to fix that — we hit the virtual links! Developer Clap Hanz and Sony have teamed up once again for a day on the links. Headsets on, it’s time for Everybody’s Golf VR.

Clap Hanz is the developer of the Everybody’s Golf (you might also know it as Hot Shots Golf) series. In fact, this VR outing is the 13th golf game they’ve made, with installments on all four PlayStation consoles, the PSP and Vita, and now the PSVR. While I can’t say the Chibi art style has been my favorite, there’s no doubt that they are compelling and surprisingly deep golf games. Meant to be entirely accessible, as the name would suggest, Everybody’s Golf VR aims to bring golf to an entirely new audience. Before I took the first swing, I knew it was going to work.

Virtual reality has a massive advantage over literally any other delivery method, and I’ve seen it play out with everyone who puts on the HMD for the first time. Gamers and non-gamers alike can pick up a Move controller and intuitively know precisely what to do. Complex instructions and controller mechanics are cast aside in favor of intuitive motion-based controls. It really is as simple as lining up a shot, doing a bit of body mechanic tuning, and driving the ball down the fairway. 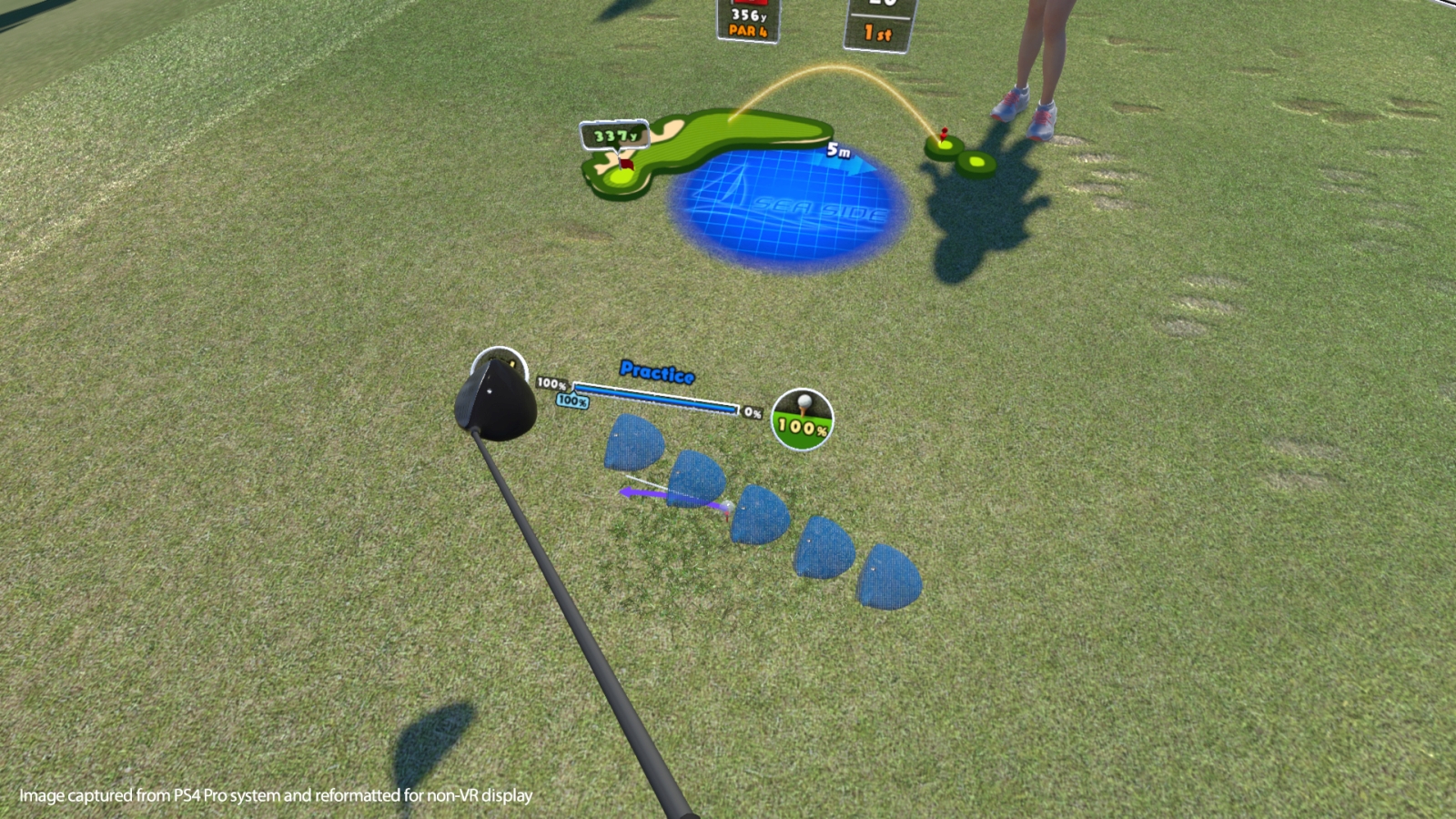 Lining up a shot is very intuitive.

Before you get started, you’ll jump into the practice course to set up your golfer. You can select left or right handedness, male or female, height, which controller type you’ll be using (you can use the DualShock 4 or the far-more immersive Move controller), and whether you’ll be playing from a standing or seated position. You never see your avatar, so I’m not sure what any of this does for you beyond setting your height and which way you’ll facing to swing, but it’s still fun to imagine.

Caddie in tow, you’ll take your first swings on the course. Lining up your shot is extremely simple. Swinging through in Practice Mode lets you see your power and whether your body motion would strike true or cause you to slice or hook the ball. A small trail of semi-opaque club heads will show you the swing path, as well as the outcome before you click the Move button to address the ball. A small power meter over your swing reflects the amount of oomph you’ve put into your shot, and if you can replicate your successful practice swings, you’ll probably be in business.

Hitting the ball sends it flying into the distance and occasionally into sand traps. Like most golf games in beginner mode, Everybody’s Golf VR will automatically try to select the best club for where your ball has ended up. You can override it once you’ve got the swing of things, of course. Don’t be fooled by the helping hand of having your caddie select a club for you — there’s much more under the hood here. 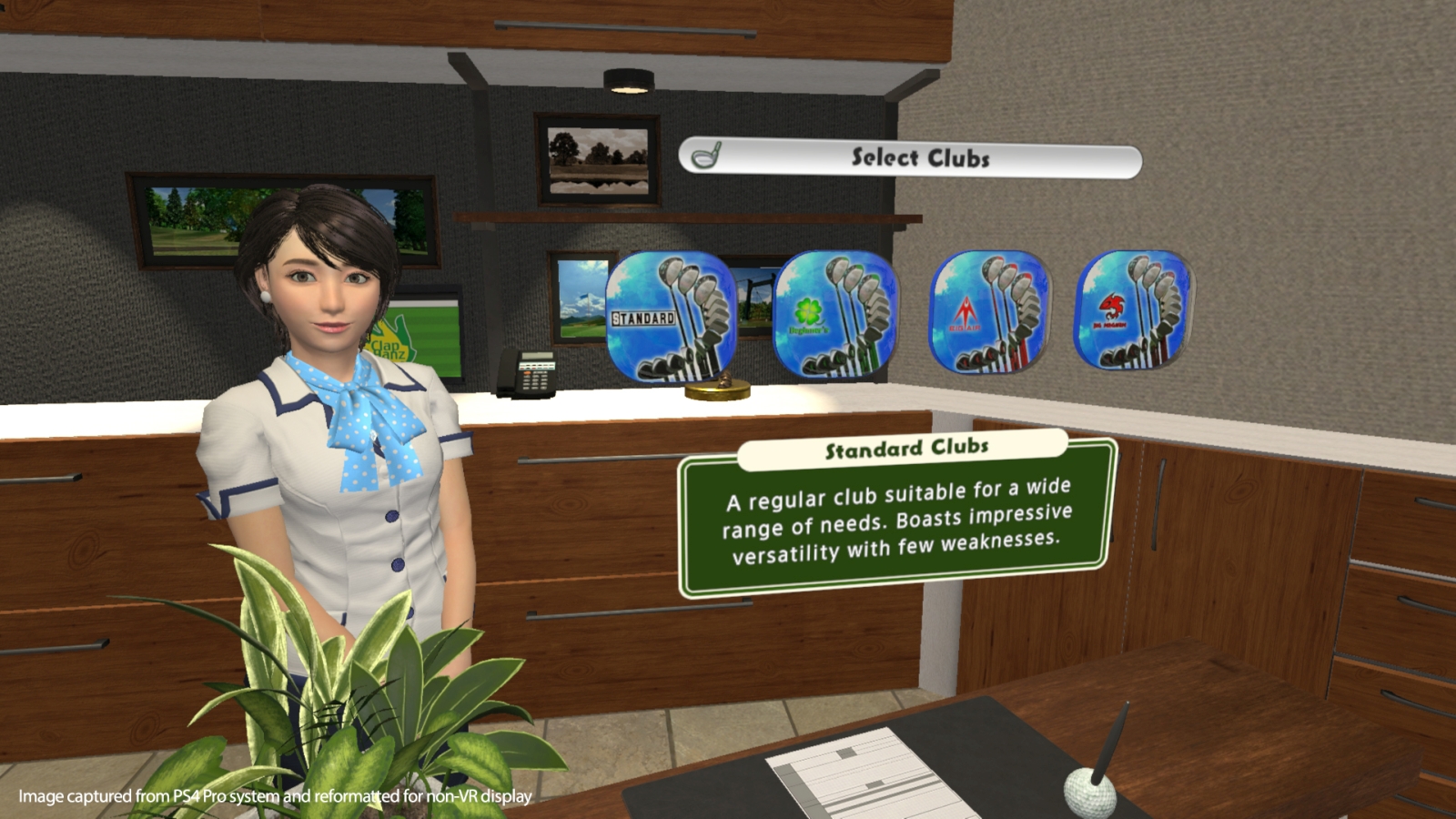 After just an hour of play I immediately noticed that I had the ability to chip my shots in by opening up the club face and hitting it in a more “punchy” fashion. I could also set up a draw by aiming the club face slightly to the right of the pin and then angle my hips slightly to close the face of the club. I was surprised to see this attention to detail paid to what could easily have been a more basic affair.

If you aren’t a pro golfer, and I think that likely applies to nearly all of us, Everybody’s Golf VR has got you covered. Shortly after your first round you’ll unlock “Beginner” clubs. These are freakishly large clubs with massive heads on them, meant to ensure you have plenty of contact with the ball. Similarly, you’ll unlock a “tornado” for the hole that sucks the ball in if it gets reasonably close, making your short game a breeze. These are meant to help ease new players into the game, and they do a fantastic job. Given that much of the game (new courses – Forest is open from the start, as is the practice range, but the other courses are locked behind play progress), you might also use these as tools to help grind out enough XP to open the remaining portion of the game up. 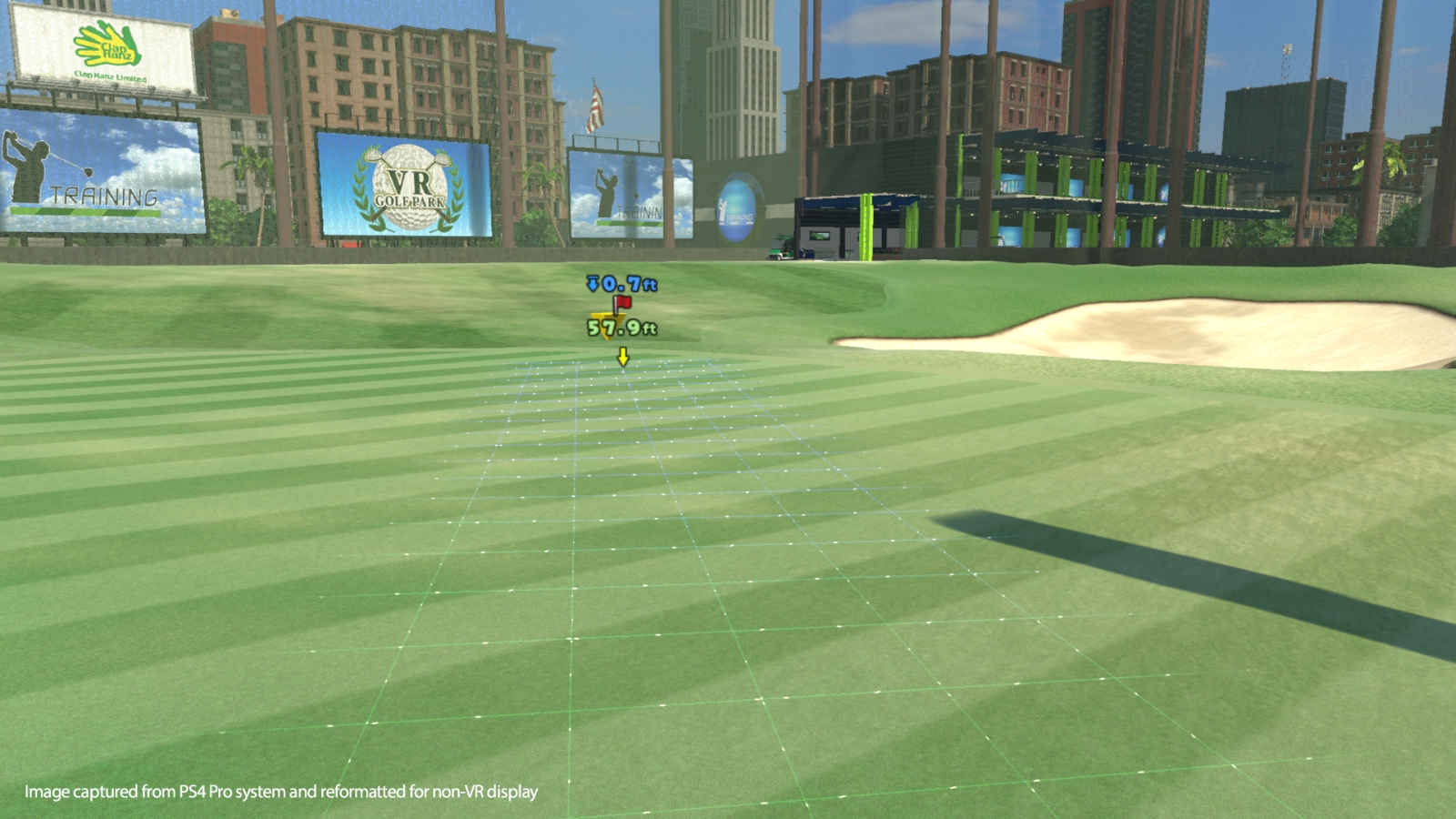 Speaking of the short game, the putting game uses very similar techniques to other flat-screen titles. A grid with movement lines lets you know if the pin is uphill, or runs off to the left or right. If nothing else, your caddie will be there to guide you as you try to make par. The power meter becomes crucial here (as does muscle memory) as you’ll have to perfect your body motions to make that perfect shot.

Turning all of the vortex and having unlocked the “9 in/out” options, I took to the course once more to see if I’d improved over the last few rounds. Turns out I can shoot about 7 over par with the beginner pair of clubs. Given how little golf I’ve played in my life, I’m pretty happy with that.

It’s not all just time on the links and practice — there are also moments where you take a break and get to know your caddie a bit better. During one instance I apparently bought her a box of iced candies that looked like chocolate balls. We shared a little break looking out over a lake while she munched on them, and then it was back out on the course. These break up the game a bit, though delightfully Japanese as they are, they are also a little odd. I’ll leave these to you to discover. 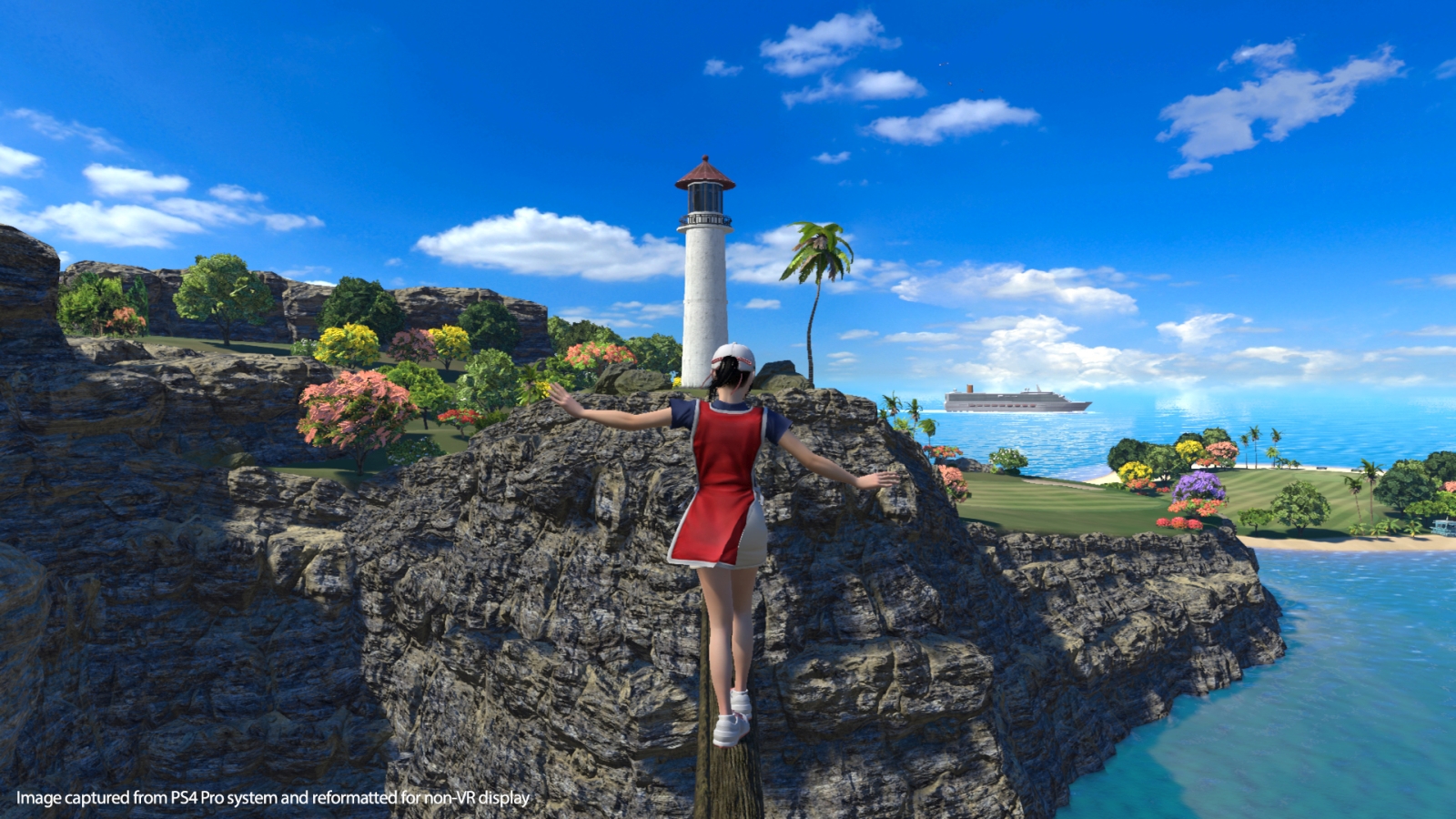 There are a lot of fun little details in the environment for Everybody’s Golf VR. As you enjoy your time on the course you’ll see the occasional leaf tumble through the air, frogs leaping around, and even the odd capybara-looking rodent zipping by while you line up your shot. To ensure that the game looks its best through the PSVR, it’s obviously not going to be a Days Gone level of graphical quality, but that doesn’t mean that the world isn’t highly detailed and full of life. Replacing the Chibi-style animation are normal sized humans who emote and otherwise work hard to suspend disbelief as best as they can.

On the audio side, as is often the case with games that are localized to English, there is plenty of voice repetition. There are four caddies for you to bring out onto the course, one of which is unlocked from the start, a second that is unlocked over time. The third is unlocked for pre-order or can be purchased after June 24th, and a fourth is available for picking up the Digital Deluxe, or as DLC. That said, no matter who you’ve got backing you up on the course, they’ll have only a handful of phrases to bring them to life. 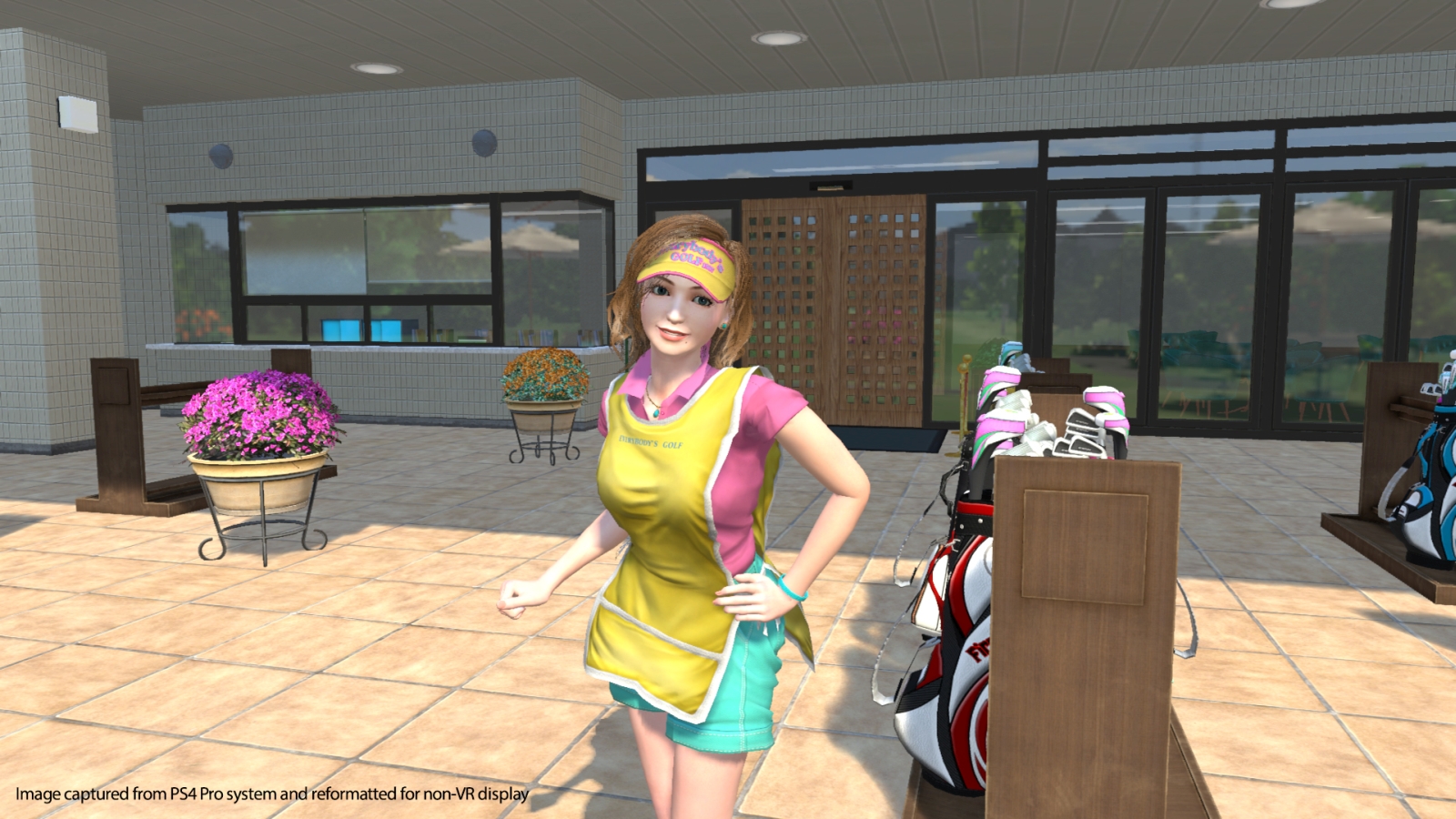 Normally I don’t comment on the pricing of games as I leave that up to the individual to determine value for themselves. That said, Everybody’s Golf VR is priced at a fairly reasonable launch price of $29.99. There are also underpinnings of expansibility with the possibility of new courses and other downloadable content — it’ll be interesting to see if Clap Hans steps up to that plate.

In the end, Everybody’s Golf VR is an excellent new way to experience golf without the funny pants or rising greens fees. What it lacks in localization, it more than makes up for with immersive and light hearted fun. Tee up, this one is fun for the whole family.

Ron Burke is the Editor in Chief for Gaming Trend. Currently living in Fort Worth, Texas, Ron is an old-school gamer who enjoys CRPGs, action/adventure, platformers, music games, and has recently gotten into tabletop gaming. Ron is also a fourth degree black belt, with a Master's rank in Matsumura Seito Shōrin-ryū, Moo Duk Kwan Tang Soo Do, Universal Tang Soo Do Alliance, and International Tang Soo Do Federation. He also holds ranks in several other styles in his search to be a well-rounded fighter. Ron has been married to Gaming Trend Editor, Laura Burke, for 21 years. They have three dogs - Pazuzu (Irish Terrier), Atë, and Calliope (both Australian Kelpie/Pit Bull mixes).
Related Articles: Everybody's Golf VR, VR
Share
Tweet
Share
Submit