Concrete Genie has a good central mechanic in its magic paintbrush. Where the game falters is in delivering gameplay surrounding those mechanics that matches that level of inspiration. I had a good time with Concrete Genie, but the game really puts much of the onus on you to find the fun in the face of lackluster gameplay. Painting the game’s environments was inherently enjoyable, but how much you get out of the game really comes down to your appreciation of the artwork you cover the town in.

The setup is that the protagonist, Ash, and his family are from the docking town of Denska that was ravaged by an oil spill which causes the local economy to dry up, the local populace to migrate inland, and infects the town with some sort of impenetrable darkness. This leaves the town deserted and ripe for the mild vandalism caused by a roving gang of miscreant kids. Against his parents’ express wishes, Ash spends his time there where he has his fondest memories. After Ash’s sketchbook is torn up by these local bullies, he finds himself face to face with his creations come to life on the walls of Denska’s sad and hollow facade. Taking this newfound power to heart, he sets to covering the town in his art and bringing light and beauty back to the desolate town. 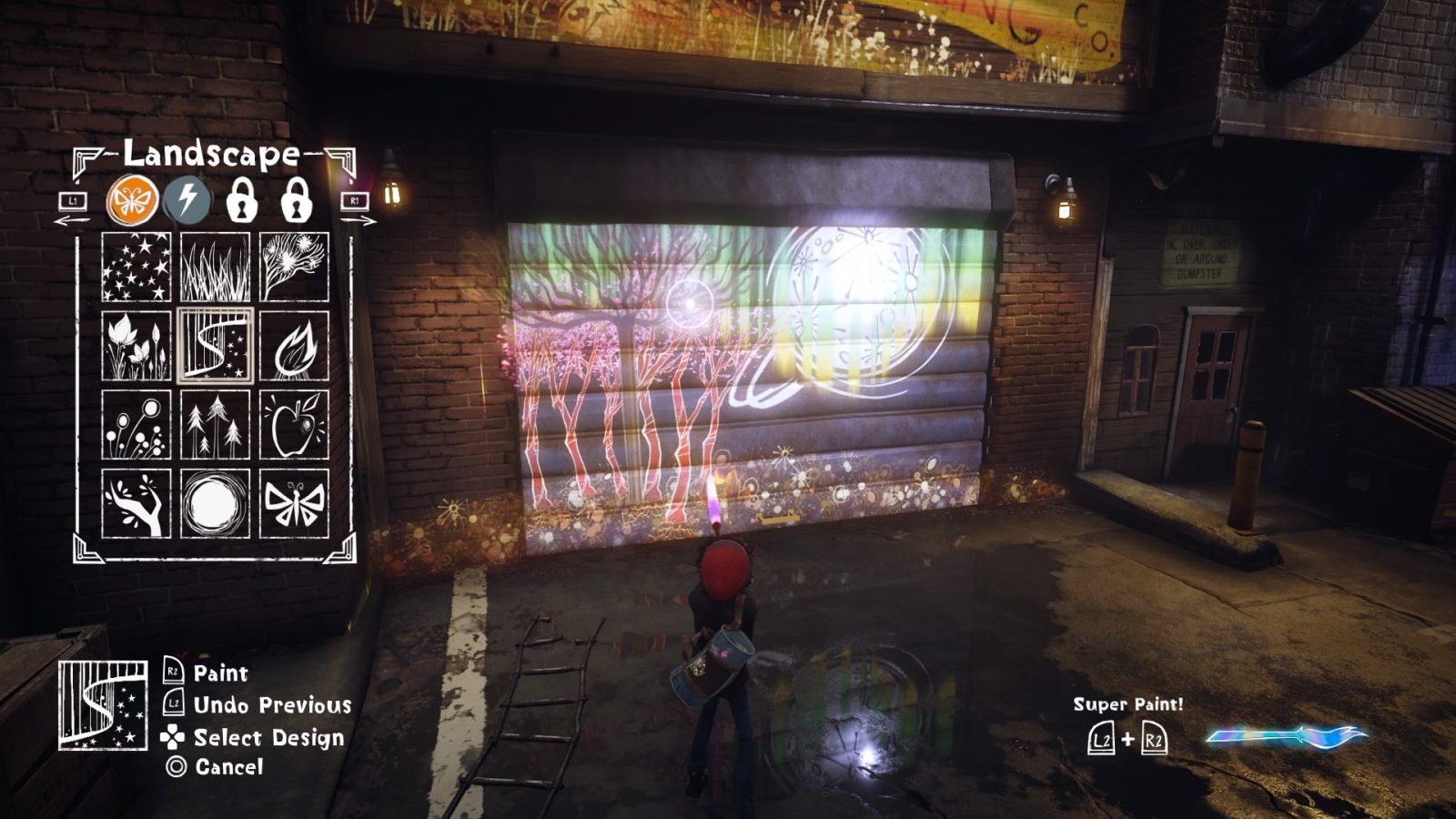 You are then introduced to the mechanic at the heart of the experience: painting. At any time you can hit the right trigger and bring up a cursor, choose from available art templates and paint the walls of the town. You’ll be painting with almost no restrictions at times making the game world begin to quickly take on a unique identity that gives the game a personal flair, where each area feels your individual artistic approach. Painting is fairly simple, you can either use the controller’s motion controls to move the cursor around the screen or use the right stick. I found the motion controls to be perfectly simple and I never had issue painting just what I wanted. The game does hold your hand a bit as you never need much precision. It tended to work exactly as I intended, but the choice was nice.

Unlike Sony’s recent Dreams wherein you can craft and mold anything you can imagine, your creative expression is more limited in Concrete Genie. You aren’t drawing free form but rather picking something out of your available sketches and choosing how that is applied. The drawing you do is limited to how tall or curvy a flower is or how much grass you want to put on your mural. You aren’t creating the art from scratch.

That being said, some of my best moments with the game were finding bare walls and covering it with art from the game’s limited selection of drawings (pine trees, stars, icicles, etc.). To progress, though, you need to find strings of lights to paint around and illuminate before you ultimately paint that area’s “masterpiece” that unlocks the next area. Those masterpieces can look neat but exemplify my larger issues with this system: how the game limits your creativity. I have no problem with the limited tools, but the masterpieces are instead dictated to you by Concrete Genie’s titular genies. These are Ash’s assorted monsters he’s sketched in his book that you find scattered around the world and serve as your companions of a sort. They affect the environment to allow Ash to progress, they refill his Super Paint meter which allows you to paint areas affected by the spreading darkness, and they request that you paint specific things to appease them. This often just felt like it was stripping away my ability to be creative by simply telling me which handful of sketches were necessary to move on. I understand wanting you to paint something specific, but instead of asking you to figure out what needs to be painted, the genies will explicitly tell you exactly what you need to do. 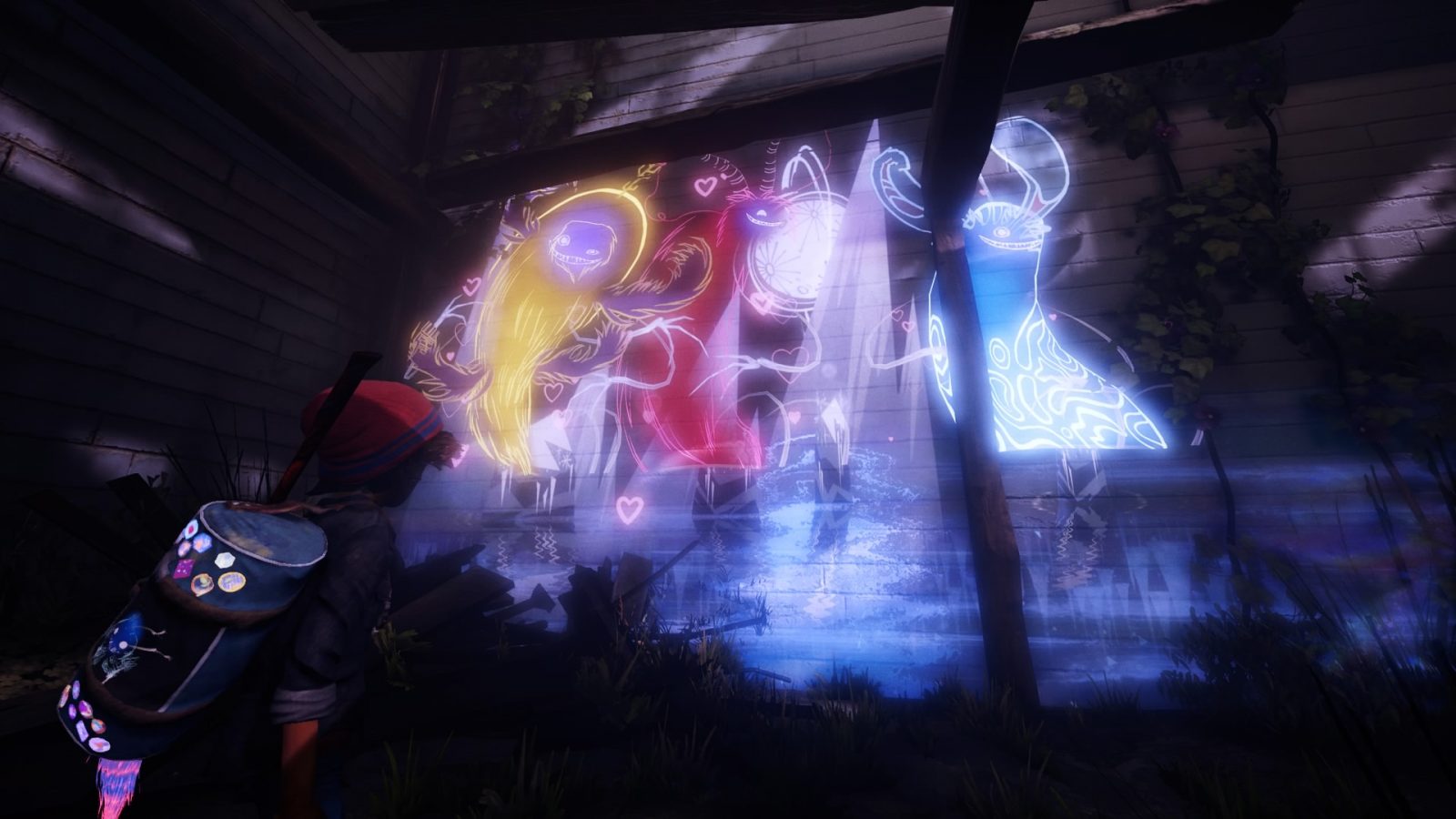 It’s a shame because the genius of its painting mechanic is that the art on the walls always looks incredible regardless of whether you choose the templates or not. That’s because they aren’t static images pasted onto the walls but rather glowing neon creations. The trees sway in the breeze, the stars twinkle in the presumed night of your painting, clouds cause a persistent rainstorm on the walls of Denska. I never got bored of plastering anything and everything on the walls and seeing what sort of scene I’d created.

The gameplay when you aren’t painting leaves something to be desired, though. There is some simple platforming to clamber around the rooftops, and while navigating the varied city environments you are also avoiding the town bullies—who inexplicably have such an issue with Ash as to harry him around town and put up malicious graffiti calling him out by name. This ostensibly adds a light element of stealth gameplay to the mix, but in practice being spotted by them is only a small wrinkle with little consequence. Avoiding them is so trivial that the only time I was captured by them, despite regularly running right into their midst, was when I simply wanted to see what would happen (you respawn and need to retrieve your paintbrush that is lying around). So the game then needs to rely on the painting to carry the entire experience, which only mostly works.

That is until the final portion of the game where this all changes and the gameplay takes a decidedly action-oriented shift. You are still able to paint freely, but you are suddenly sending out elemental attacks and fighting bosses complete with health bars and color coded shields. I almost want to say it’s impressive except that the combat is too simple and unsatisfying to feel worthwhile on its own. As the story is taking a climactic turn, this gameplay change is interesting, but I ultimately was glad to be past it. 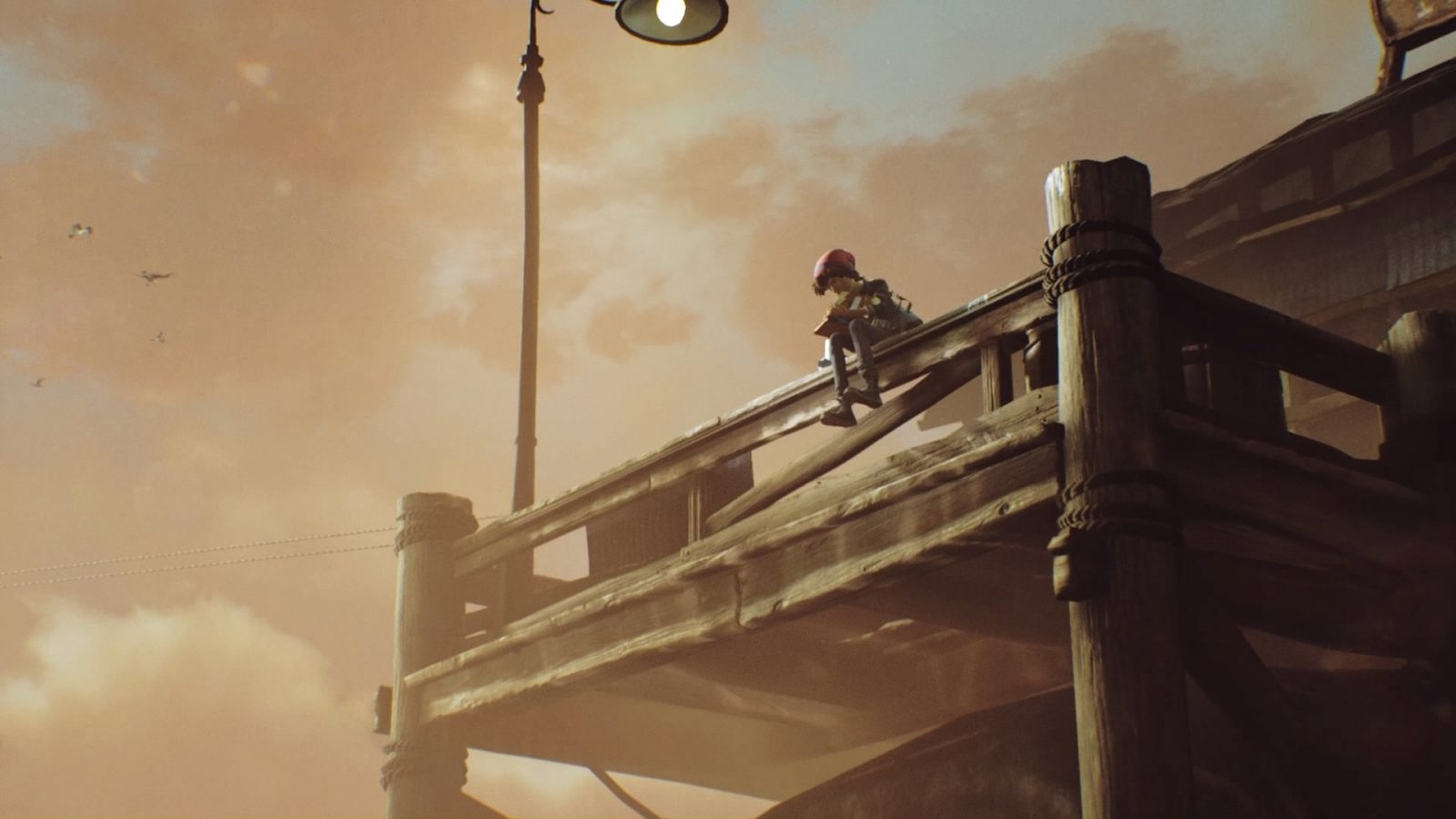 The painting is not necessarily the only thing that was propelling me onward as the story of Ash attempting to reinvigorate this forgotten town is full of charming character moments where he slowly learns the tragic stories behind these bullies chasing him down. He begins to sympathize with them even as they pester him. It’s a story that is heartfelt and well-realized in the broad strokes, but it is in the fine details where it doesn’t quite pass muster. The town of Denska was overcome by an oil spill which ruined the local fishing industry, but the darkness you clear out with the help of your genies is not a metaphor but an explicit part of that town’s downfall as referenced in newspapers Ash finds around town. Much of what happens seems lost between metaphor and reality that muddles the story. At times it feels almost whimsical, but reading a local paper explicitly describing this mysterious darkness seems to be attempting to lend more gravity to your situation but instead feels at odds with the fantastic magical journey. It also takes focus away from the more character driven drama that is more compelling than the greater problem facing the derelict town. The story manages to work despite stumbling along the way, but like the rest of Concrete Genie it is grasping at things that are beyond the scope of its actual brilliance.

Concrete Genie, much like its main character Ash, is good-natured and warm, but also a bit flat and one-note. The game, in spite of a late-game gameplay pivot, never truly manages to engage beyond its admittedly charming painting mechanic.

Nathan lives in Colorado catching Pokemon on the Go and at home. He previously spent three months interning for Game Informer before coming back to Gaming Trend to spread the good word on video games. His real passion, though, is collecting different versions of the 3DS and other weird Nintendo garbage. It's a never-ending quest for less space in his house.
Related Articles: Concrete Genie
Share
Tweet
Share
Submit