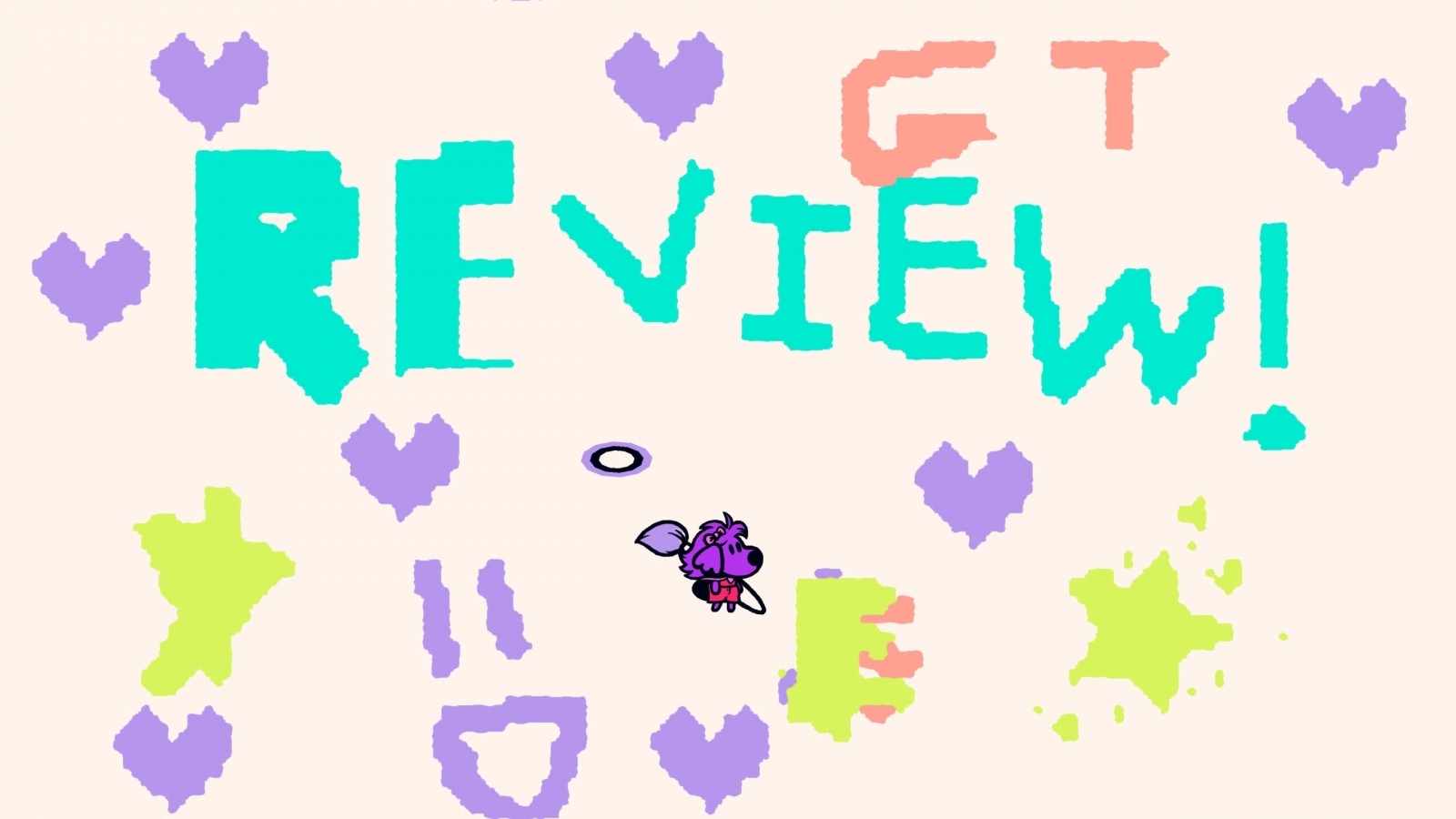 Have you ever played a game that gives you exactly what you need, exactly when you need it? In the past, Wandersong, Celeste, and Mother 3 have all given me emotional catharsis in a time of need. Apparently, in an effort to help me specifically, developers of two of the former games (and more) have teamed up to make Chicory: A Colorful Tale. Once again, Chicory is exactly the kind of game I need at this exact moment. I was being sarcastic earlier, but it seriously feels like they’re reading my mind.

In the Picnic Province, one person is chosen to use the magic brush and color the world in. After leaving their mark on the world, they eventually pass the brush on to the next Wielder. This tradition has continued since time immemorial. The latest Wielder is Chicory, whose work is almost universally popular around the Province. One day, suddenly all the color disappears from the world and Chicory is nowhere to be found! As the Wielder Tower’s janitor, you discover the brush laying just outside of Chicory’s room and… well, she wouldn’t mind if you borrowed it for a while, would she?

After naming the adorable main character after your favorite food (in my case Pancake) and picking up the brush, you’re set loose to explore and paint the world as you wish. Each area you visit has a different color palette you can scroll through by pressing L1. With your hue of choice selected and the cursor moved into position with the right stick, you can begin painting by pressing L2 or erasing with R2. The DualSense is used perfectly here, with both triggers having a satisfying click to them, letting you know when the brush will have some resistance moving through lines. The light bar around the touchpad will glow with whatever color you’re using and you can even use the touchpad to move the brush if you’d like. Coloring in each screen is very relaxing, though if you’re a perfectionist like me and want to remove every trace of white from every single location, it could get a bit tedious until later in the game when you unlock more diverse powers, so maybe wait for that before making the world your masterpiece.

In your exploration, you’ll eventually come across a very spooky tree in the Supper Woods, where things are about to get a bit darker. Inside the tree is a dark void, inhabited by an eyeball monster which serves as the first boss fight. Sadly, these fights are the weakest part of the game gameplay wise. They’re bullet hell-like segments in which you need to avoid attacks while simultaneously using the brush to damage the boss. It’s easy enough until you get hit, which causes everything to freeze for a moment and zoom in on your character; it’s very disorienting. Taking two hits in a row, which happens a lot, will have time rewind to the beginning of the current phase. Thankfully checkpoints are very generous, so you’ll only have to go back a few seconds. Some attacks can be difficult to parse before they happen, so there is a lot of trial and error. These segments are mostly for storytelling purposes, which they do a great job in that aspect, but they still could have used a bit more polish. 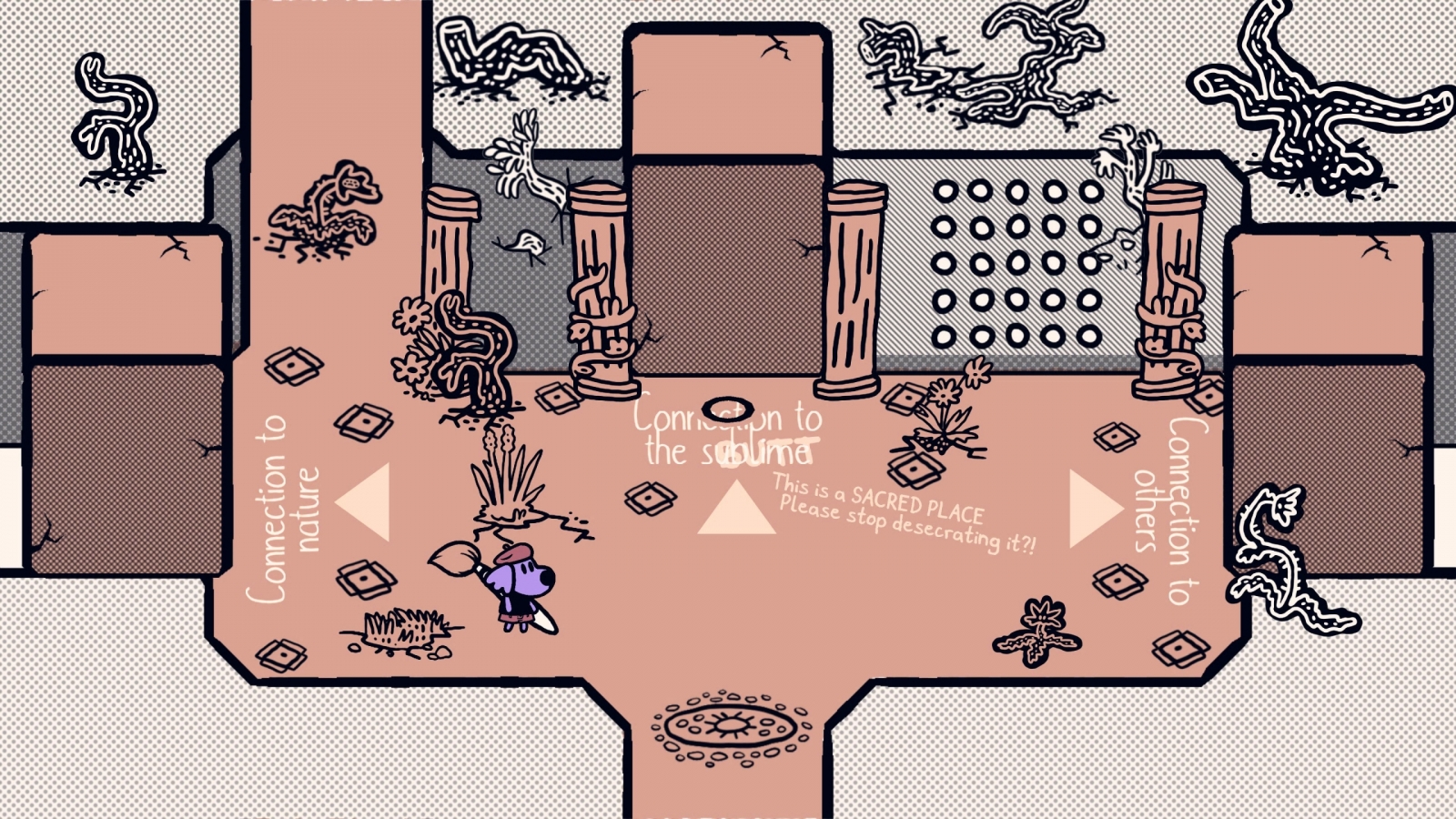 For these more uncomfortable moments, there are a ton of accessibility options to help players through the game. You can adjust the amount of hits Pancake can take, add the option to skip boss fights entirely, enable content warnings to prepare yourself for certain scenes or if you need to skip them, toggle “wet” sound effects, and many more. It’s great to see a game that claims to be a comfy experience for everyone follow through on that “everyone” part, and while I personally didn’t need to use these options (though I enabled content warnings simply to see what they were) it’s great to have them if you do need them.

Chicory’s Zelda inspiration is very, very clear once you start gaining new abilities and thus are able to explore more of the world. I don’t want to spoil the powers you gain, but once you get them your mind immediately begins racing thinking of places you’ve already seen where you can use them. They also open up new opportunities for puzzle solving, and some of the puzzles here can really test your skill for thinking outside the box. There’s painting puzzles, timing puzzles, and even platforming puzzles scattered all over the place. Outside of progressing the main story, your rewards for exploring and solving puzzles are mostly cosmetic. There are quite a few brush styles to find, like stamp symbols or different types of strokes, but you’ll mostly find new clothes to dress up Pancake with. Oddly enough, I found myself much more motivated here to explore than in typical Zelda games. On top of wanting to fill in the world with color, I was excited to encounter new situations, characters, and of course adorable clothes to wear. Without the pressure of needing to find crucial upgrades or defeat tough enemies, the Picnic Province is relaxing and enjoyable to be in. 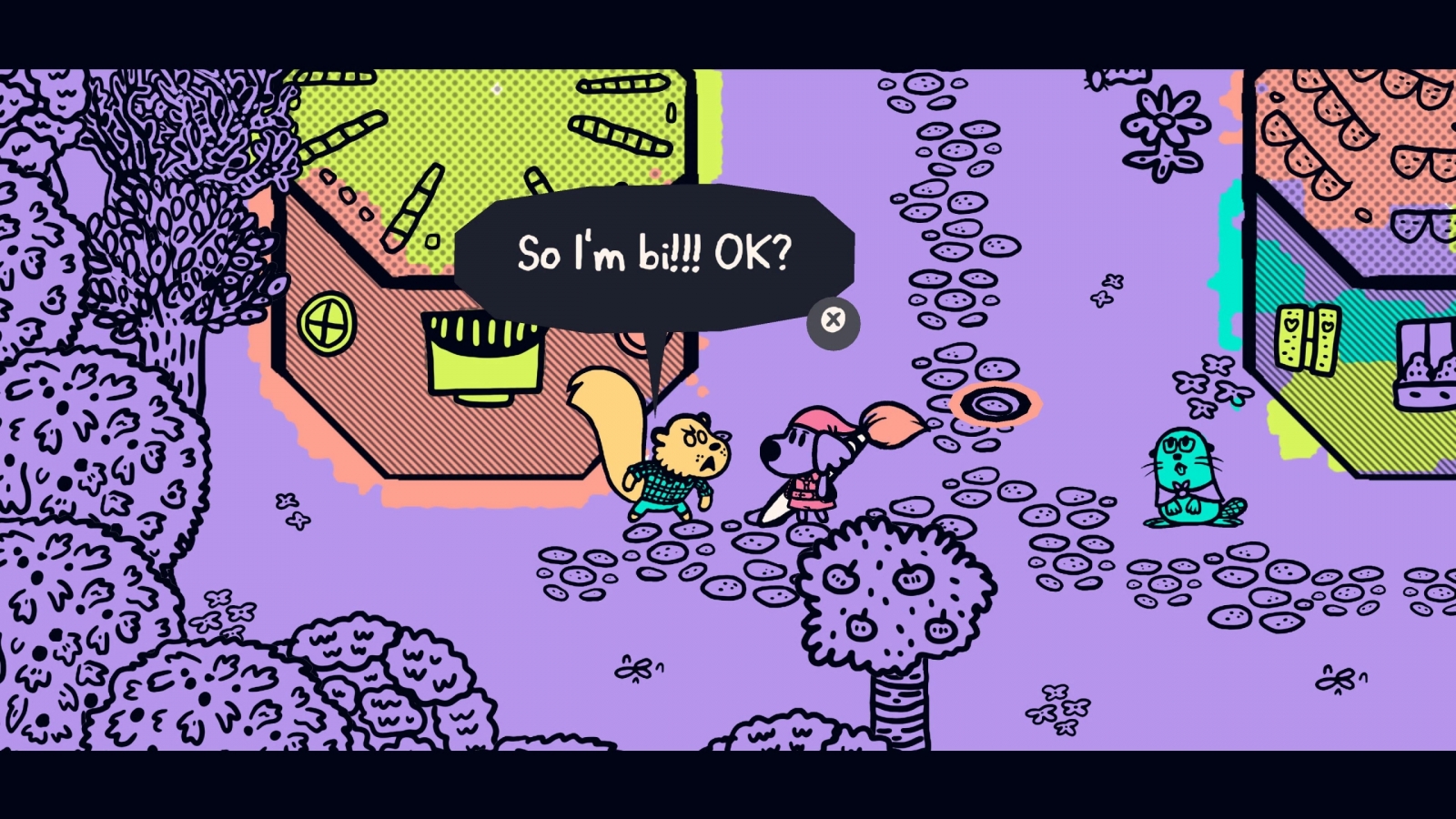 The music you’ll hear while exploring that world is absolutely incredible. Composer Lena Raine once again shows her mastery of her craft with a soundtrack of eclectic tunes of soothing piano melodies, exciting Jazz, and dark synths. Every song in this game is an absolute joy to listen to and never once got old, even after spending far too much time getting the city of Dinners to look just how I wanted it to. It perfectly accentuates each moment and mood of the game, while still being nice to listen to on its own.

You can probably tell from the screenshots, but Chicory is adorable. Even just with the black and white visuals, everything looks soft and cute which serves as a great contrast to the intense boss designs. Coloring in the world only serves to make things look even cuter, regardless of your artistic skill. You can even decorate anywhere you want with furniture you collect throughout the game, which NPCs will actually use. Speaking of, the characters you meet along your journey are diverse and have a lot of things to say. There are a lot of hilarious jokes and heartfelt moments to discover, along with side quests to accept like delivering mail or solving a mystery so you’ll want to exhaust everyone’s dialogue. One great detail I really appreciated was when I encountered a character named Pancake, who actually acknowledged that we shared a name and had unique dialogue to go with that situation. There’s also a lot of queer representation, with one character even declaring, out loud, that they’re bisexual instead of the typical “I don’t like being labeled” cop-out. It’s refreshing to see a game be this overt mixed with more subtle moments. Oh, and be sure to call your mom occasionally, she can give you hints or just some emotional support.

Chicory: A Colorful Tale is a delightful experience that, while confronting some of the darker parts of creativity, will simply make you feel good. The world is cute and fun to explore, puzzles are a joy to solve, and coloring in the Picnic Province is relaxing.

David is the kind of person to wear his heart on his sleeve. He can find positives in anything, like this is a person who loved Star Fox Zero to death. You’ll see him playing all kinds of games: AAAs, Indies, game jam games, games of all genres, and writing about them! Here. On this website. When not writing or playing games, you can find David making music, games, or enjoying a good book. David’s favorite games include NieR: Automata, Mother 3, and Gravity Rush.
Related Articles: Chicory: A Colorful Tale, Indies
Share
Tweet
Share
Submit