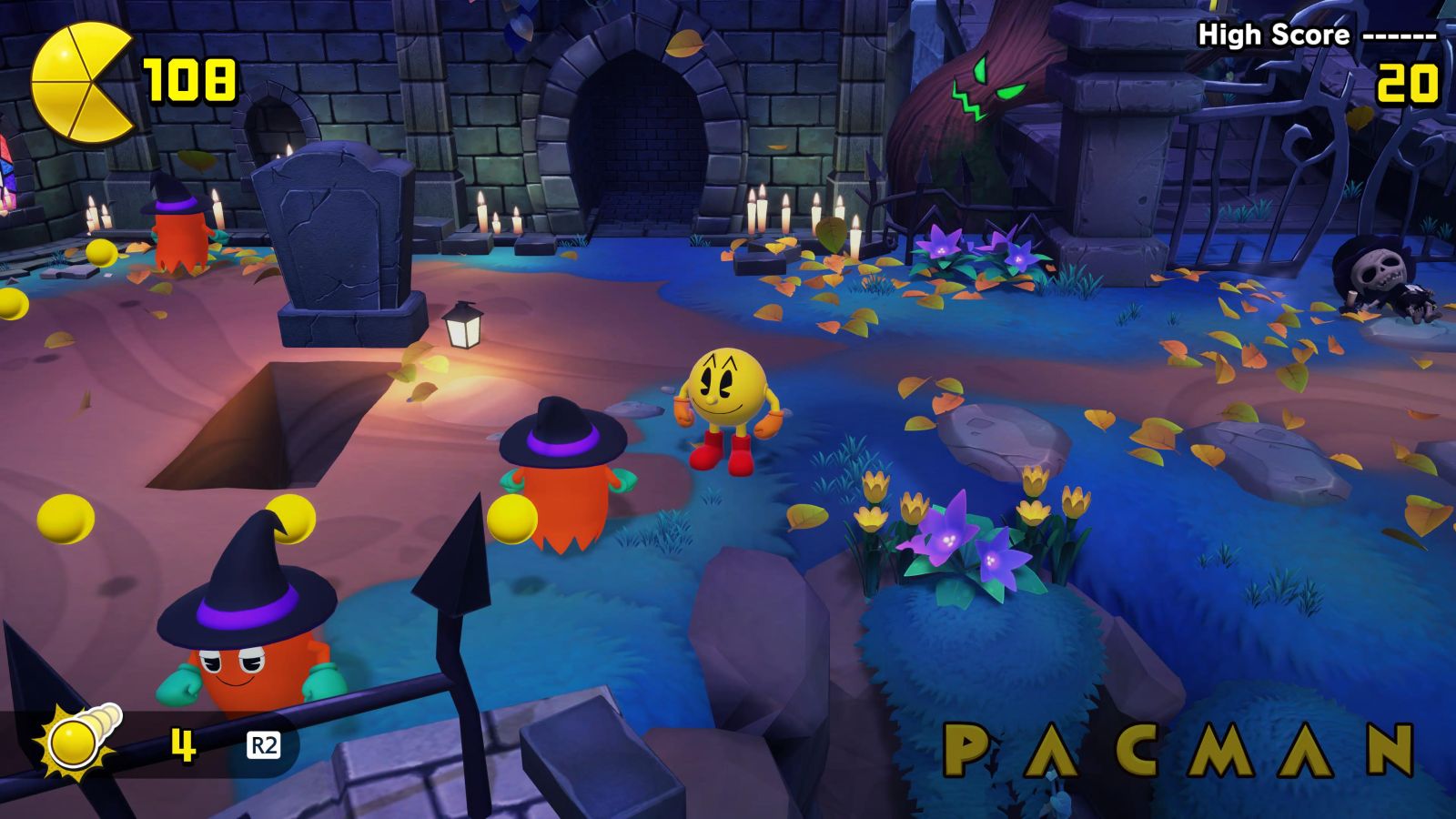 I have no nostalgia for the original PAC-MAN World. Somehow, I missed that the game even existed despite PS1 being my system of choice during my formative years. As such, I can look at PAC-MAN World Re-Pac without nostalgia potentially blinding me, and I must say – I’m rather impressed. While not on par with the greats of the platforming genre, I was still pleasantly surprised by the creativity on display in this charming, albeit short, adventure.

The story is, unsurprisingly, rather basic but works well enough to get the adventure started. PAC-MAN returns home to find that his family has been taken captive by a bunch of bumbling ghosts who meant to kidnap PAC-MAN himself, on the orders of the nefarious TOC-MAN, who obviously has a few issues with PAC-MAN that he needs to work out. PAC-MAN immediately heads to Ghost Island to rescue his family and take down TOC-MAN.

Ghost Island is comprised of six distinct areas, each featuring three to four levels and a boss battle. Aside from the first level, the game is surprisingly open, allowing you to jump between multiple areas, with two to three being open to explore at any given time.  Additional areas will open as you progress and work your way up to TOC-MAN’s mansion. 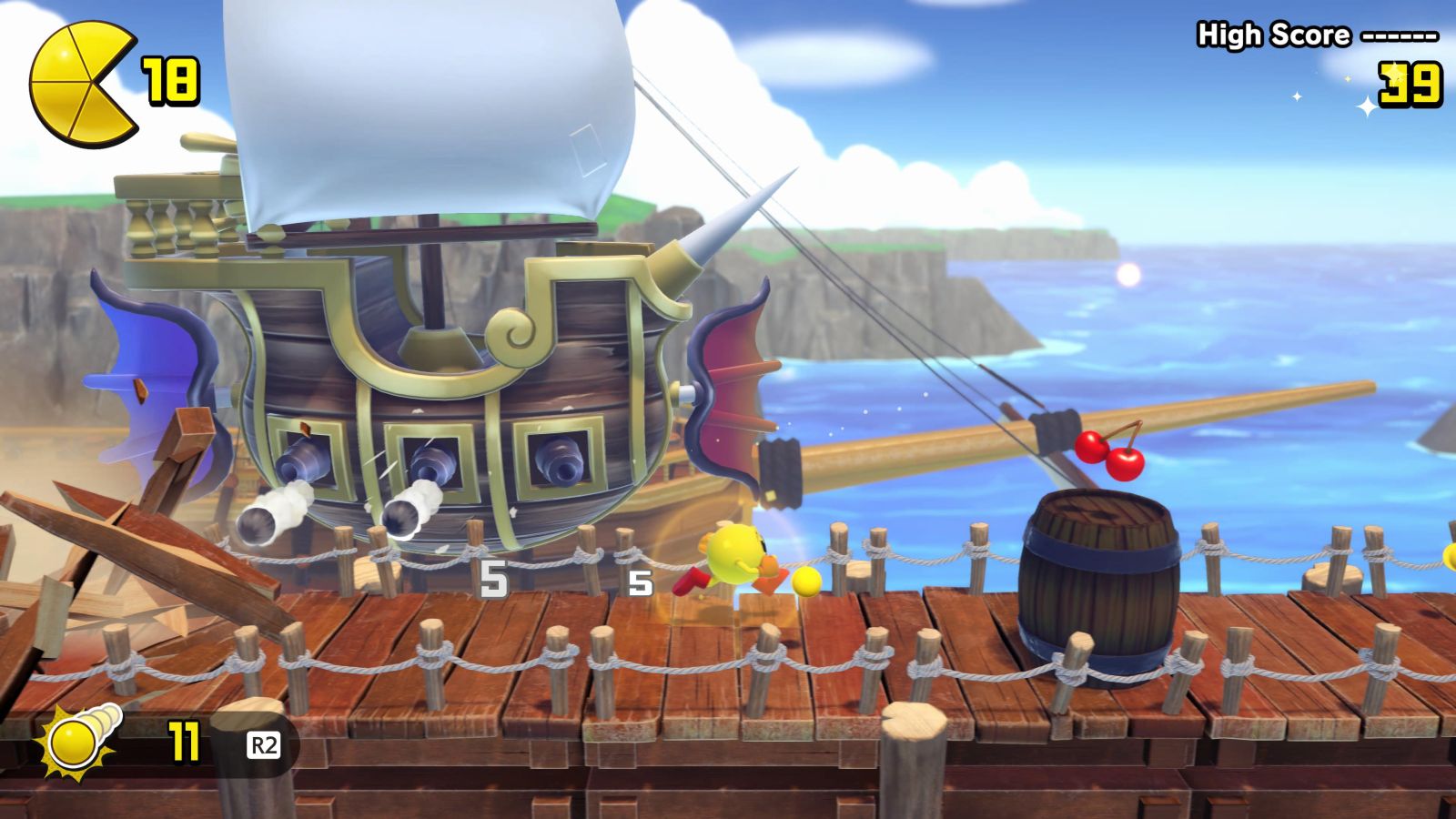 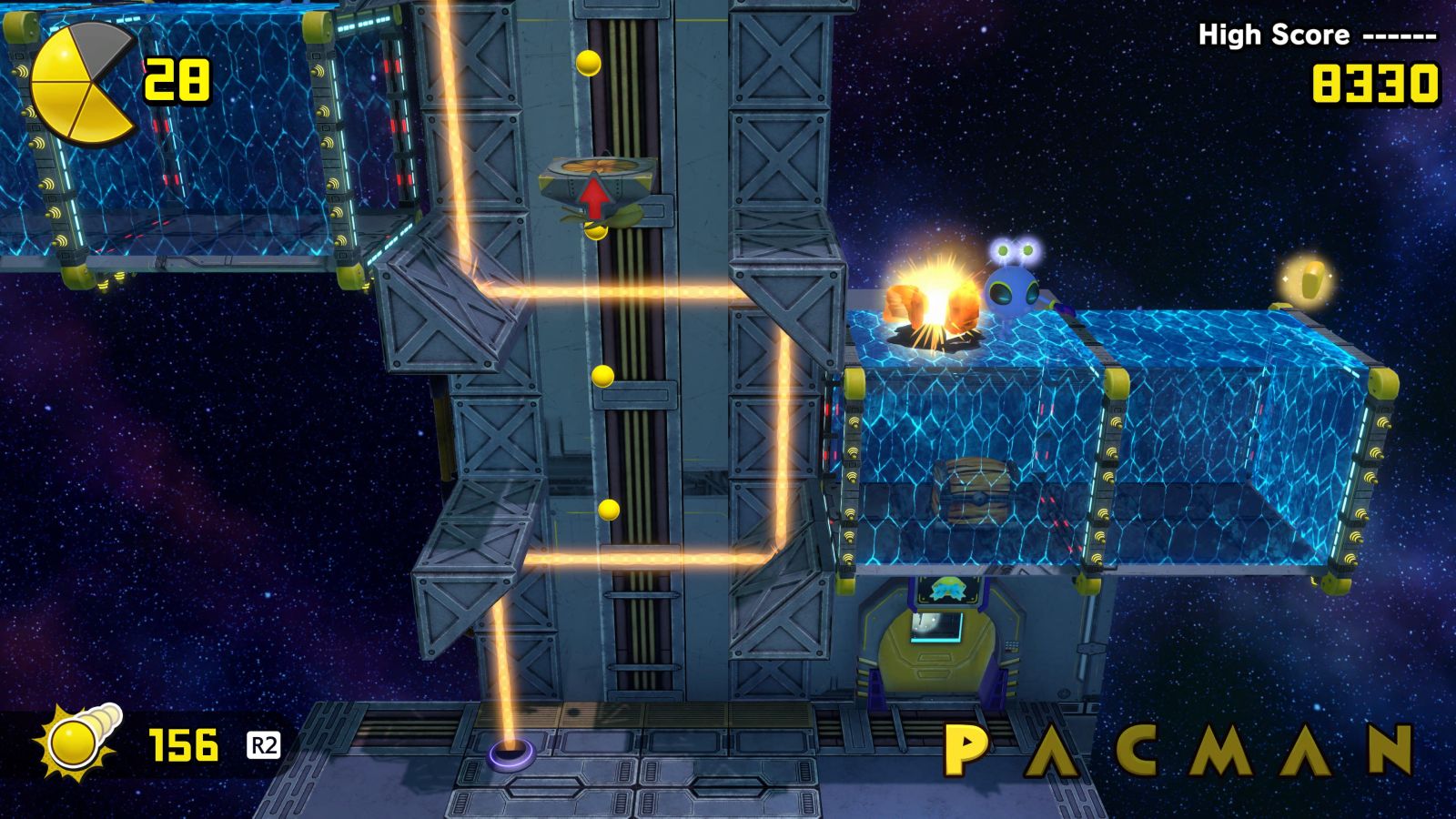 The game plays much like you’d expect from a 2D/3D hybrid platformer, taking a few cues from both the Donkey Kong and Mario series. Play takes place mainly on a horizontal field, although quasi-3D elements are thrown in such as sometimes being able to walk toward and away from the camera, but mainly you work your way from left to right. This is cleverly concealed by multi-tiered level design though, with PAC-MAN working his way up, down, as well as back and forth throughout levels as he unlocks new paths to progress and uncovers secrets. What seems at first to be rather straight-forward level design often ends up having quite a bit of exploration built in, especially for those intent on collecting 100% of items.

PAC-MAN has a few methods of attack, with a butt slam being his base attack and the ability to throw the pac dots he collects or use his rev roll as secondary methods. The rev roll is just a fast running charge which is used to traverse steep obstacles or to activate helivators – which are the game’s version of elevators, which move both horizontally and vertically. While mainly straight forward, there are a few enemies which cannot easily be defeated using a butt stomp and force you to use different methods, including metal enemies which require special power-ups to defeat, and boss battles which are pleasantly more in-depth than I expected.

The most fun method of attack is also the one used most sparingly – eating a power pellet and growing large. Only in his large state can PAC-MAN defeat ghosts, and while large any enemy he encounters is immediately crushed, along with any breakable objects in his path. The thrill is short lived but remains fun every time it occurs. 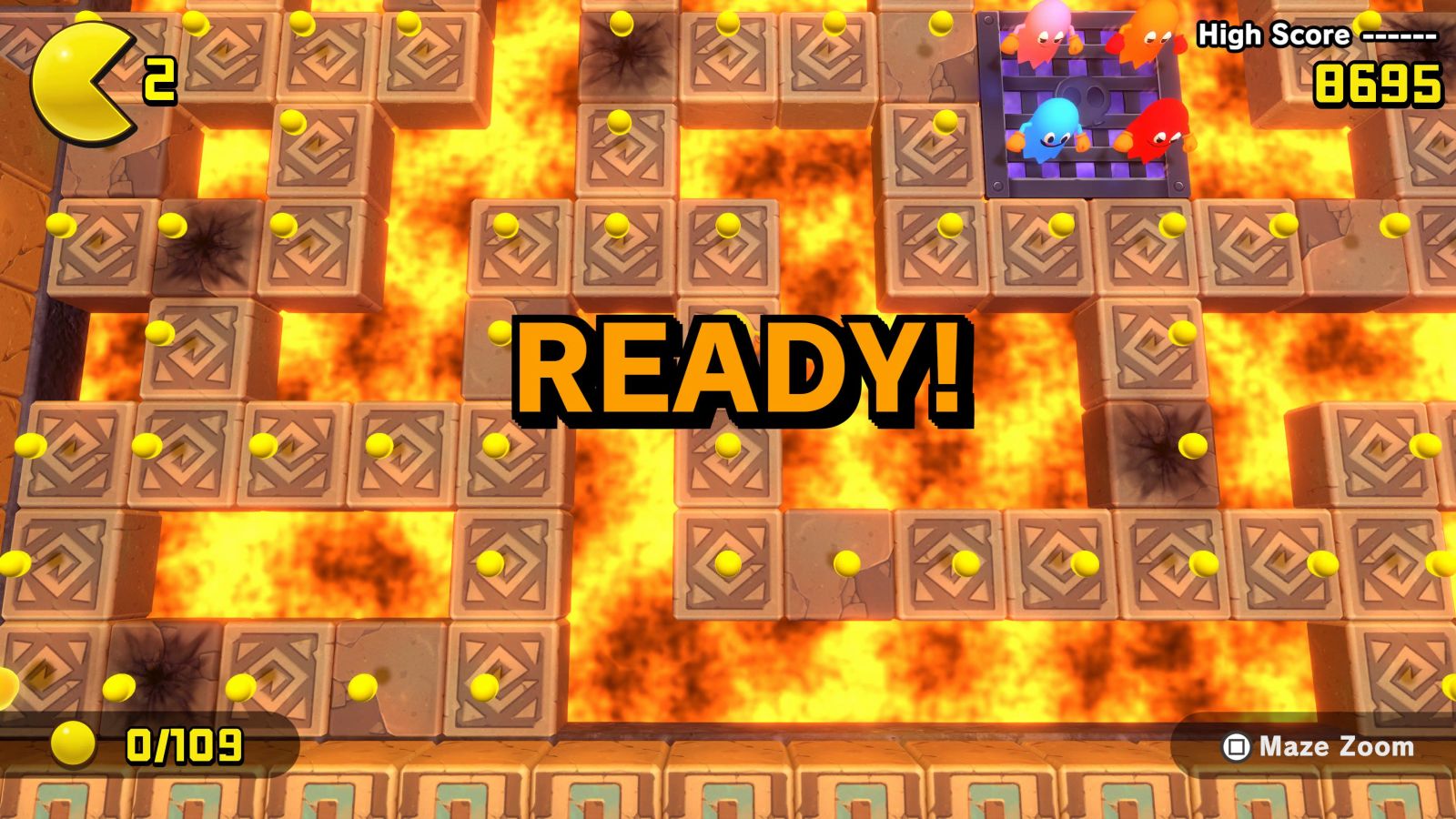 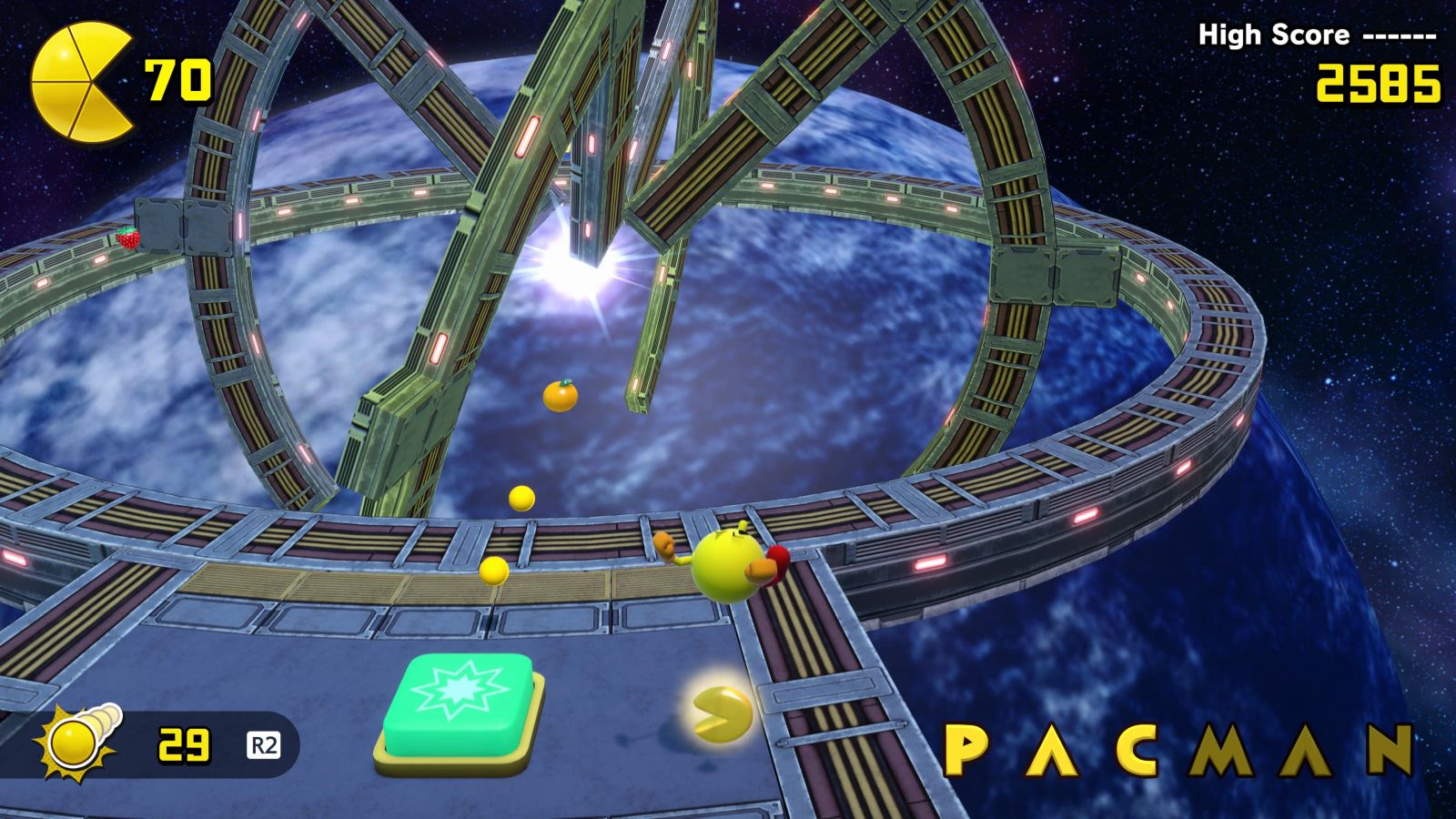 Your main goal in each level is to reach the TOC-MAN statue at the end and destroy it, which reveals the end of the level. Along the way there are quite a few optional items to uncover, including the letters P, A, C, M, A, N, slot tokens, keys to the gates holding your family members, and mazes. Like in the Donkey Kong games before it, collecting the letters to PACMAN is the hardest task, but doing so unlocks a bonus timed stage at the end of each level. Slot tokens are used during the point tally screen after a level, while the maze key will unlock a maze in PAC-MAN’s old style, in which you must collect dots, avoid or eat ghosts, and evade obstacles. Each maze is themed after the area you are in and are an absolute delight to play through. If you fail to complete the maze, no worries, as you can replay each maze that you’ve unlocked at any time from the hub world. The keys are often hidden in random levels, yet unlock a cage in a different level, so if you reach a family member and don’t have the key to unlock their cage, don’t assume – like I did – that you need to scour that stage to find the key.

After completing a level, you are taken to a screen to tally the points collected, and to use the slot tokens found throughout the level to attempt to win some bonus lives. Each slot token found in a level allows you to spin the slot machine once, attempting to match three icons to gain lives. Afterwards the pac dots collected and items collected are tallied and a final score is given.

While the collectibles are nice and do serve to add a bit of replay value, most are easily collected on your first run through provided you take your time and explore as you progress. Check points are abundant, and so are lives, so there is rarely any real peril derived from failure. This is not a tough game, although there are a few trickier areas and boss fights that can get rather hectic, but most players will breeze through the entirety of the game in five to six hours. 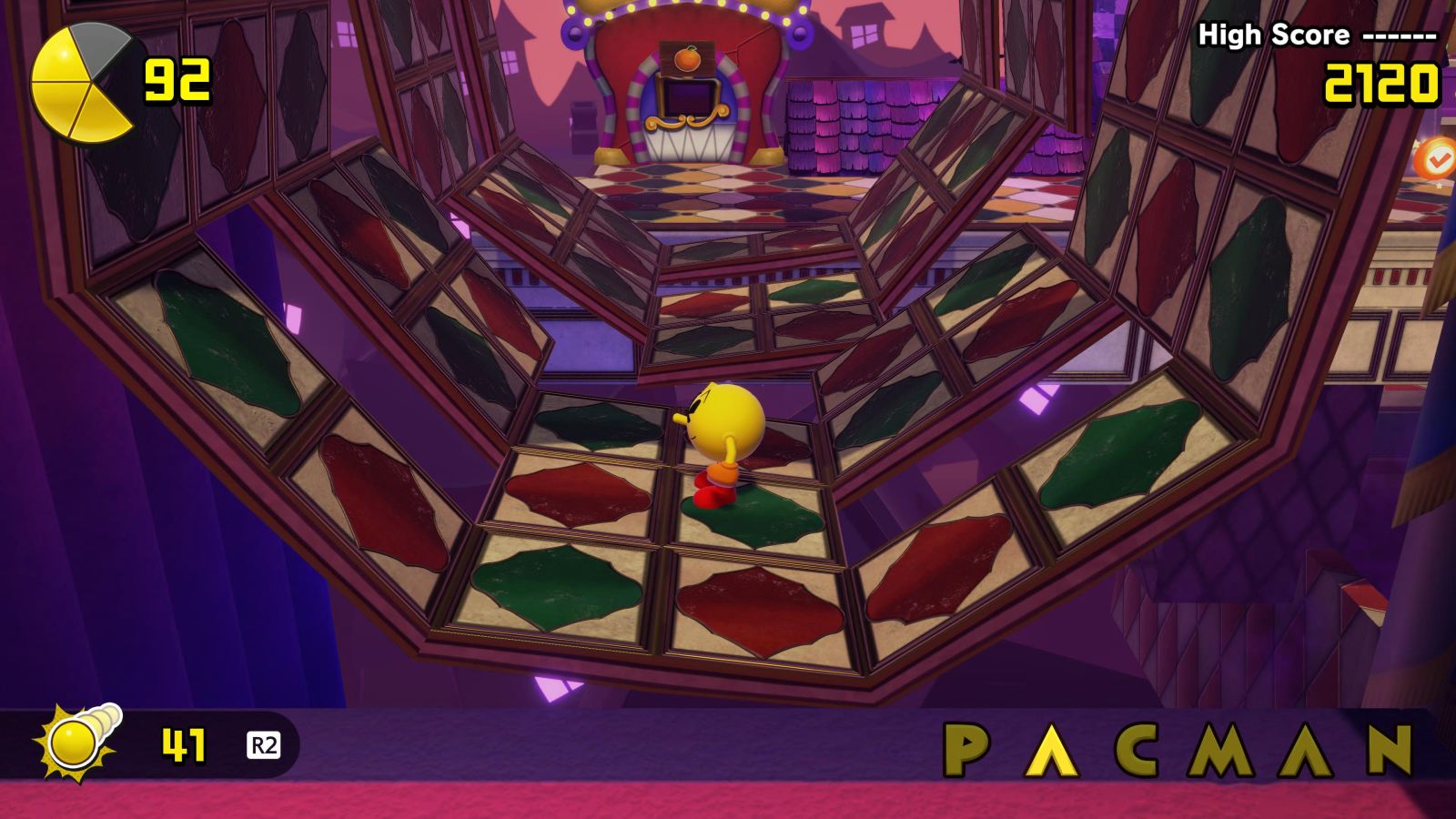 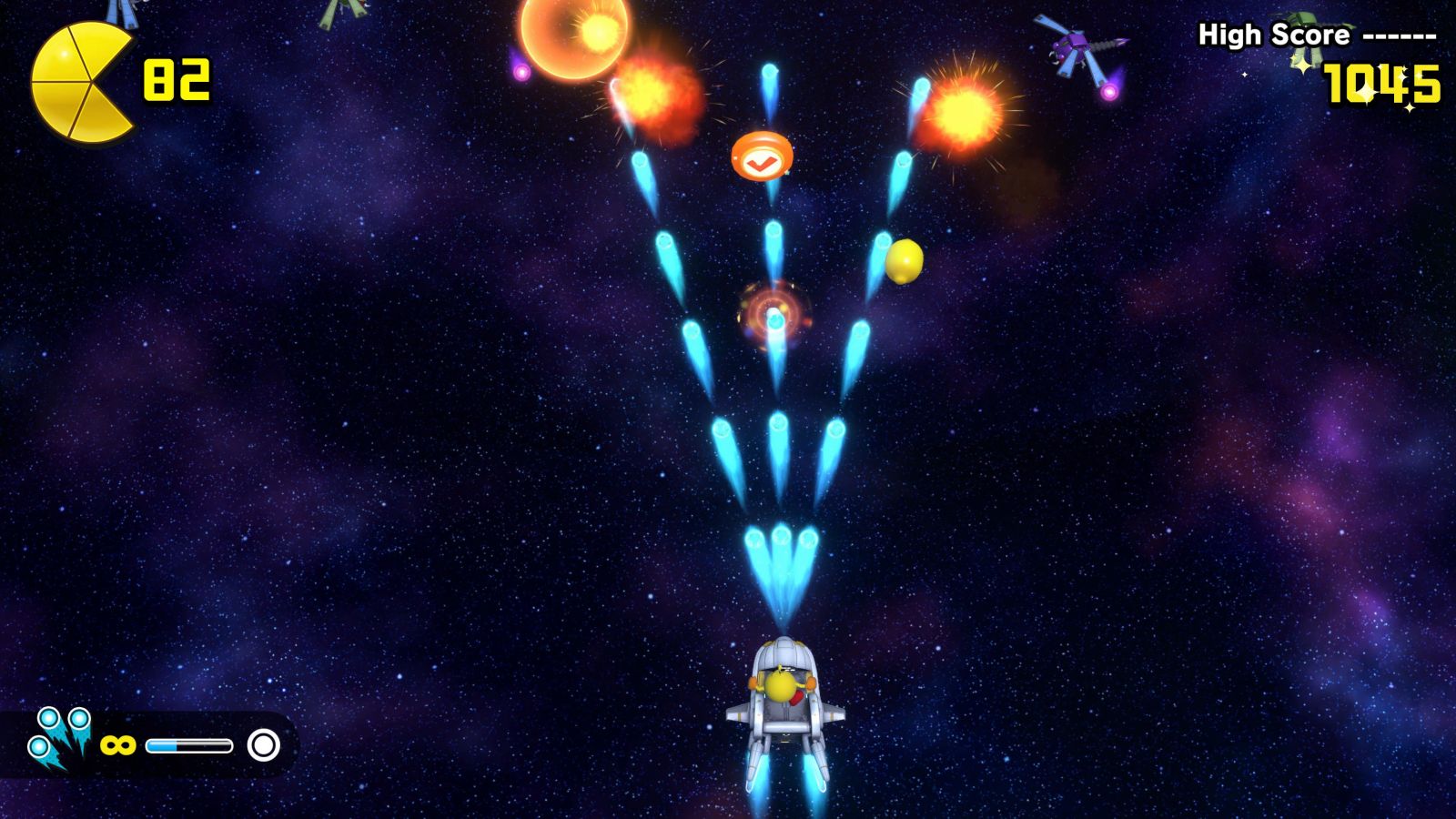 While fairly easy, the game does win points for its creativity and level diversity. Areas to explore include a fun house, a factory, space, ruins, a pirate ship, and TOC-MAN’s mansion. Enemies and obstacles change per area and between levels, keeping the game fresh throughout. Unfortunately, this also means many of the abilities you find are quickly forgotten, such as the butt bounce bomb, which is introduced early on and then not seen again until near the end. Still, I appreciated the constant change in scenery, enemy design, obstacles, and abilities – together they help stave off the feeling of repetition that may have otherwise sunk in after the first few areas.

Boss fights are the highlights of the game for me and are surprisingly creative, often forcing the player to think outside the box. Many bosses are large and, as such, cannot be hurt by PAC-MAN’s usual methods of attack. Boss battles may see you having to dodge attacks while on a conveyor belt until you find a metal pellet, which in turn allows you to cross burning pipes and launch an attack. Another boss battle sees you participate in a retro-inspired space flight, taking down a series of enemies until you reach the boss. Yet another boss fight has you hop in a kart and race ghosts. Each boss fight is unique and most importantly – fun.

Aside from the short length of the game, my main gripe is that you can’t change the camera orientation, so some levels do get confusing or more irritating than necessary. While the game normally does a good job of rotating when needed, there are a few frustrating encounters and platforming sections due to your inability to control the angle of the camera.  It’s not a game breaker, but it does create small pouches of frustration in what is otherwise a relatively stress-free experience.

PAC-MAN World Re-Pac is a fun 2D/3D platformer with creative level design, unique boss battles, and collectible items that are actually fun to find. From space ship battles to kart races, PAC-MAN World rarely sticks to one genre of play style for long and is all the better for it. While lack of camera control does make some sections more frustrating than necessary and the campaign clocking in at only five to six hours is a bit disappointing, there’s still a lot of fun to be had with this remake whether you’re a fan of the original or a newcomer.

Richard Allen is a freelance writer and contributing editor for various publications. When not writing for Gaming Trend you can find him covering theatre for Broadway World, movies and TV for Fandomize, or working on original stories. An avid retro gamer, he is overly obsessed with Dragon's Lair. Chat with him via @thricetheartist on Twitter and @richardallenwrites on Facebook and Instagram.
Related Articles: PAC-MAN World Re-Pac
Share
Tweet
Share
Submit