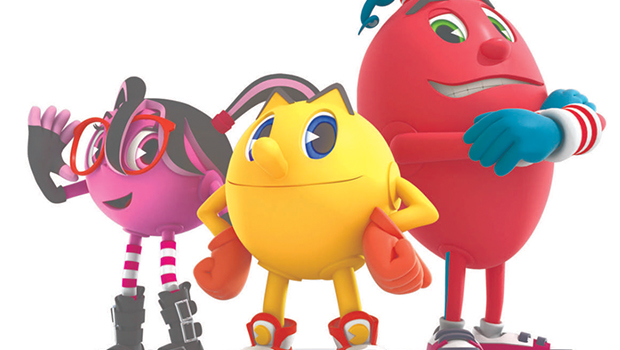 For as long as I can remember, I’ve seen Pac-Man as a brand that just can’t compete in today’s market. A game about a big yellow dot that eats smaller yellow dots worked just fine as a game concept in the still infantile video game industry of 1980, but how do you turn that simplest of concepts into something that will stand out and succeed in the ocean of original and always-changing ideas that is the video game generation we live in today? If Pac-Man and the Ghostly Adventures 2 has any say in the matter, then the answer is probably: “you don’t”.

Look back at the history of our round, yellow hero once he stepped out of the arcades and into the 3D world and you’ll see a gamut of incredibly pitiful attempts at making Pac-Man work as anything other than the simple game it was originally known as. I may be coming off as a bit too harsh but past examples like Pac-Man World and the original Pac-Man and the Ghostly Adventures only help solidify the point that Pac-Man as a 3D platformer just can’t seem to work. Sadly, this latest iteration is no different.

In case you’re not aware, Pac-Man and the Ghostly Adventures 2 is the second game to be based on the animated TV show that first aired last year. The show is on its second season now, and along with that comes the obligatory tie-in video game that plays and feels like nothing more and nothing less. We’ll get to that soon enough, but first a little background on the show. In an interesting little twist, this representation of Pac-Man is actually the son of the original Pac-Man, and he, along with his friends, Cylindria and Spiral, are often saving Pacopolis from the evil Betrayus. Sure, it sounds absurd but hey, it’s a kids cartoon based on Pac-Man.

If you played last year’s Pac-Man and the Ghostly Adventures on consoles then you should know exactly what to expect here. This game is almost identical to last year’s console offering. To call it a trimmed-down version would be an understatement, and if you have played it, then you should already know the crippling problem with the game. If not, let me elaborate: Picture a 3D platformer. One where you can run around the environment, jump from platform to platform, attack some enemies and collect things. If that sounds like the most generic platformer you’ve ever heard of, well, guess what’s awaiting you here. As the game hastily throws you into the first stage you learn that evil guy, Betrayus, is up to no good again, and it’s your job to munch your way through thousands of ghosts, stop Betrayus, and save the day.

The overworld layout is extremely simplistic. There are a handful of “worlds” to explore, each containing a large amount of stages. When it comes to the level design in each stage, there’s not much to say or look forward to. If you see ghosts, you eat them and move on. There are pellets scattered all over which you can eat to earn points which will add up to your final high score at the end of level. It’s a nice incentive to try and add replayability to the game, but if you’re anything like me, getting a high score will be the last thing on your mind when trying to push yourself through the levels. Playing for points may have been a logical incentive to offer gamers in the original Pac-Man but it feels antiquated and out of place in a platformer today.

The central hub contains a couple of locations that you can explore, but there’s really no incentive to do so in between levels since they offer nothing of worth to the player, other than a few pellets and foods to eat and the occasional NPC to interact with that’s wandering aimlessly about. Maze High School and Sir C’s Lab are among the the most noteworthy attractions here. Visit them if you’d like, but you’ll get nothing out of it other than a few speeches on how evil Betrayus is, and how you must stop him. The Pac-O-Pedia, on the other hand, offers you some information on the characters that inhabit the world, enemies you come across, and all the Pac forms you’ve acquired. It’s not the most in-depth encyclopedia I’ve seen in a game but it’s somewhat useful if you need a refresher on how some parts of the game work, or if you wanna learn more about the world.

The game does offer a few praise-worthy elements in the platforming side of things in order to keep it from getting too repetitive. As I briefly mentioned earlier, there are quite a large number of “Pac forms” which you unlock as you progress through game and each comes with a Challenge level, specifically designed to teach you they work. For all intents and purposes, these challenge levels do a good job of showing you how the new forms you just acquired work while easing you into them. These Pac forms cover the spectrum of what you’d expect to see in a 3D platformer. Ice Pac gives you the ability to freeze enemies in place and freeze certain objects in the environment to make platforms out of them. Chameleon Pac gives you a long, stretchy tongue to swing around and Metal Pac allows you to walk upside-down, allowing for some fun and somewhat challenging levels. My personal favorite, Granite Ball Pac, turns you into a giant boulder that can roll anything in its path. All all of these newly found abilities added a lot to keep the levels somewhat diverse, especially when you’d come across more than one in a stage. The most negative aspect here is the fact that our hero is more outspoken than you might like and can’t help but express himself with the corniest lines you can think of. If you like your platformers with a healthy dose of catchphrases and puns such as “everybody chill” when you obtain the Ice Pac power up, then you’re covered. I would also bring up the fact that Pac-Man quotes Fat Bastard from Austin Powers, but you probably wouldn’t believe me.

Is it any wonder that the best Pac games in the past 20 or so years were the outstanding Championship Edition titles and the little experiment on Gamecube known as Pac-Man Vs? Both of which introduced the current generation to new and innovative ways to play the old-school game while still retaining the classic Pac-Man formula. Sure, the animated series these games are based on seem to be doing well enough to warrant a second season and a sequel, at least, but there’s not much here but uninspiring and outright dull platforming that you’ll find yourself storming through with incredibly ease. That is, if the game manages to hold your interest all the way through. You could argue that this game is obviously marketed towards kids who watch the cartoon and, as such, we shouldn’t expect much from it. The game is as plain as it gets so there’s not a lot really wrong with it but there’s also nothing good about it. It’s just painfully generic. It plays as you’d expect a platformer to play. It controls fine and the abilities actually add some variety from level to level. The automatic and self controlled camera system is by no means perfect, it does its job, although there were more than a few occasions where I got hit by an unseen enemy, fell to my death or missed a platform because of badly placed camera angles. There’s nothing here that I’d consider terrible, everything plays and functions just as you’d expect a 3D platformer to, which is not a bad thing, it’s just painfully boring.

Pac-Man and the Ghostly Adventures 2 is a lackluster 3D platformer that offers nothing new or outstanding to the genre. The abilities you find offer some variety from stage to stage, but it’s not enough to make up for the dull presentation and uninspiring gameplay.