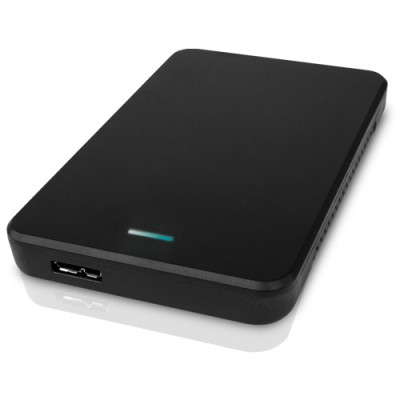 When Sony and Microsoft announced their new consoles the first thought I had was that the anemic hard drives must have saved them literally tens of dollars. 500GB of space might have been an amazing amount of space at one point in time, but with games like Batman: Arkham Knight taking up 35GB before the first patch or bit of DLC, you can see how fast the 362GB remaining evaporates. You see, the OS and various peripheral subsystems like Netflix, Skydrive, and Upload Studio on the Xbox One chew up a good portion of your real estate. Microsoft, in each and every press release they send, refer to their console as the “All-In-One Home Entertainment System,” but to meet that lofty goal they’d need a little leg room.

You might think back to my review of the OWC PlayStation 4 upgrade kit and recall that there are a few steps to crack the case and install an internal hard drive. In this case, the Xbox One doesn’t require you to open the case, allowing you to simply use a USB 3.0 external hard drive to take on the heavy lifting of storage. I’ve taken a look at other external storage options in the past, so this would make for a great apples to apples comparison.

The OWC Xbox One Upgrade Kit is a straightforward system. Opening the box reveals a two foot USB 3.0 cable, an instruction card, a 5400 Seagate Momentus 2.5” hard drive inside a solid case, and a carrying case. Since there is no requirement to open the Xbox One, even a child could handle this install. Moving the data, on the other hand, requires a bit more finesse.

Prepping the drive:
The upgrade kit instructions suggest you should be able to just plug in the drive and the Xbox One will automatically prompt you to format it. In my experience, I tried all three USB 3.0 ports on my Xbox One and none recognized the drive. I performed a full power cycle (holding the Xbox One button on the front for 10 seconds) and the drive snapped to life, showing 1.8TB of the 2.0TB capacity. It was listed as “External” and “Pictures, music & video” so I did a format to prep it for games and apps. After answering whether or not I’d like all future content to be installed here, and giving it a name, the format had the system ready to go in just five seconds.

Migration:
With the drive ready to go, you’ll head to “My Games & Apps” to start moving your game data. Selecting the game you’d like to migrate, press the menu button on your controller and select “Manage Game”, and then the “Manage All” option. At this point, you’ll either “Move All” or “Copy All”, giving you the option to either move the data from internal to external, or simply make a copy, leaving it on both drives. Selecting either will take a chunk of time, depending on how large the files are. For reference, a game like Assassin’s Creed Unity at 40.3GB in size took just over seven minutes to copy, whereas a smaller title like Strike Suit Zero (1.8GB) took only 30 seconds, and Strider’s 3.0GB install moving in 41 seconds. There is no option to move everything en masse, so you’ll need to do this for every game you’d like to move to your new drive, but with write speeds this fast, it’s a non-issue.

You’ll be moving things one at a time. There is no move-all option

Performance:
If there is one area where I’d hope to see a bit of an upgrade, it’s the rotational speed of the hard drive. OWC has selected a Seagate Momentus laptop drive, which has a rotational speed of 5400 RPMs – the same speed as the original drive. I’m not looking for a 10,000 RPM Raptor or anything, but one could wish for a 7200 RPM drive, can’t we?

For this review, we took a look at the 2TB mechanical drive option (double that of the freshly-announced upgraded Xbox One SKU), so we’d have to see how much of a speed tradeoff delta (if any) higher capacity would create.

The game that nets me the most time to kick back and read a book while it loads is Grand Theft Auto V. Loading into story mode takes, by my watch, 1:40 using the internal hard drive. The external hard drive, though it is only 5400 rpms, cuts nearly twenty seconds off that time! We’ll get back to why that is in a moment.

Since I enjoyed the game so much, I also put Forza Horizon to the test. Once I could stop playing the game to actually benchmark it, I found that the internal drive loaded the game in 36 seconds, intro movies included. Moving the game to the external drive brought that time down to 32 seconds. Similarly, I saw Dragon Age: Inquisition drop from 38 to 30.

How could that possibly be?

Hardware limits:
In addition to announcing a low capacity drive for their fancy new game box, Microsoft also stacked the deck against themselves with a SATA II connection to their internal drive. You see, the SATA II connector is limited, theoretically, to 3 Gbit/s (which is roughly 300 MB per second) of transfer speed. On the other hand, the three external USB 3.0 ports are a zippier 5 Gbit (625 MB/s). Simply put, they put all the sexy on the outside when it comes to storage. It makes no sense whatsoever, but that’s what they did.

You might recall that I’ve taken a look at other external hard drive devices, such as the Western Digital MyBook. The far larger drive enclosure coupled with a 3.5” drive requires a power supply and a whole lot of real estate next to your system, even if it yielded similar results. The OWC solution comes in a 2.5” hard drive enclosure with a single cable, needing hardly more space than a deck of cards. The smaller drive can also be powered off the USB 3.0 port without the need for an external power supply — handy if you are already making the lights dim with multiple consoles.

The key differentiator between this upgrade kit and other external solutions is its sveldt case, as well as a very attractive price. At the time of writing, the drive was on sale for $129, coming with a 1-year warranty and 24/7 support should you encounter any issues with the exceedingly simple install.

Simple, tiny, and adding so much value

With the post-launch support of external hard drives, nearly any external system is a viable option (though obviously some are better than others). OWC has made this as simple as possible, giving players a plug and play solution that requires nothing more than a cord and some patience to reap the rewards.

Ron Burke is the Editor in Chief for Gaming Trend. Currently living in Fort Worth, Texas, Ron is an old-school gamer who enjoys CRPGs, action/adventure, platformers, music games, and has recently gotten into tabletop gaming. Ron is also a fourth degree black belt, with a Master's rank in Matsumura Seito Shōrin-ryū, Moo Duk Kwan Tang Soo Do, Universal Tang Soo Do Alliance, and International Tang Soo Do Federation. He also holds ranks in several other styles in his search to be a well-rounded fighter. Ron has been married to Gaming Trend Editor, Laura Burke, for 21 years. They have three dogs - Pazuzu (Irish Terrier), Atë, and Calliope (both Australian Kelpie/Pit Bull mixes).
Related Articles: OWC Xbox One Upgrade Kit
Share
Tweet
Share
Submit