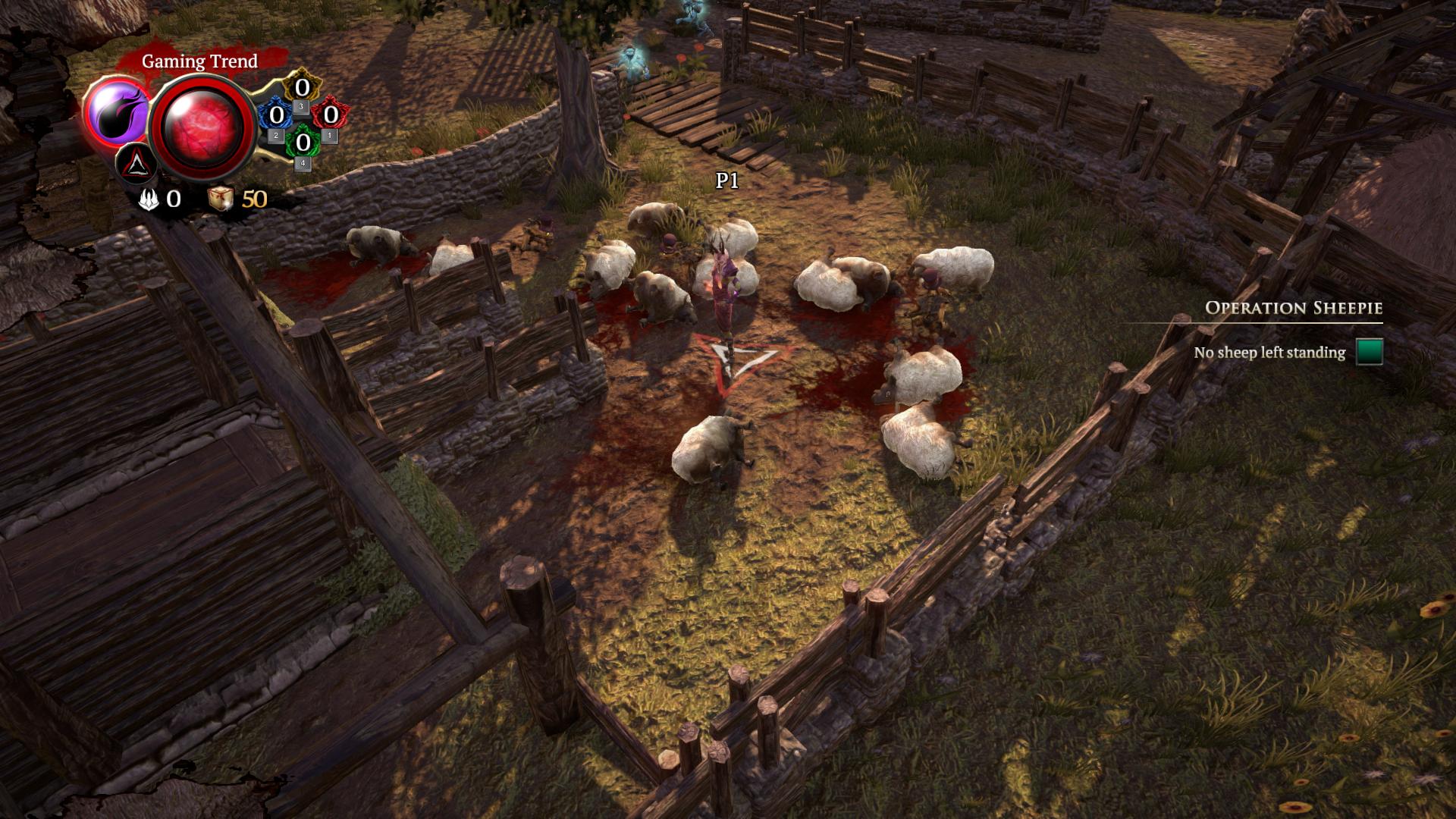 Terminator, Jaws, Alien, The Matrix, Spider-Man, X-Men, Superman, Transformers — what do all of these items have in common? The third iteration absolutely obliterated any good feelings we had about their predecessors. Eight years ago I absolutely loved a little game called Overlord. Spurred by its success, Overlord II released two years later, improving on the formula. The games were funny and unique, with gameplay that could be described as demonic Pikmin. Overlord: Fellowship of Evil manages to be the most evil game in the series so far, but for all the wrong reasons.

With the death of the reigning evil Overlord (and the destruction of the Netherheart) at the end of Overlord II, Gnarl, the twisted little minion leader, is looking for a new Overlord ruler. Cuteness has begun to infect the land via a power called “The Golden,” transforming evil creatures into horrible colorful versions of themselves, complete with skipping and singing; even the slugs get cute little racing stripes. Four Netherghuls have answered the call to end this cuteness at the source. Players can pick from Inferna the Warrior, Malady the Necromancer, Cryos the ice-wielding elf, and Hakon the dual-axe-throwing dwarf — I selected Malady. The game can be played Gauntlet-style with four players cooperatively, but we’ll get back to that. Let’s take a look at single player.

Kicking things off, the voice acting team, as well as Rhianna Pratchett, daughter of famed novelist Terry Pratchett, are back to provide one of the best parts of Overlord — the voice work and writing. We were off to such a good start…

I am a big supporter of trying new things in games. Metroid switched to a fully 3D world. Castlevania did the same and then switched back. Fallout 3 was nothing like the two that preceded it. Grand Theft Auto was once a top-down shooter that resembled current-release Hotline Miami. Metal Gear could hardly be called the same game at all. It’s important that games change and evolve. That is not what happened here.

Ride, you witless morons — not kill!

Immediately, I noticed the first thing that was stripped from the Overlord series was the ability to move the camera. Locked entirely too tightly onto the titular character, the isometric camera gives you a very narrow view of the action, leading to the constant “fun” of running towards…well, you never really know.

As Gnarl sends you on missions, you’ll eventually get the ability to spawn minions. If this sounds wrong, you are remembering the previous games correctly. Minions are no longer found and recruited, instead spawning from little cubes that fall out of some smaller Sauron’s Eye knock-off monster generator. You will start off with the ability to have two greens, reds, browns, and blues. Hardly the army I once commanded.

With minions spawned and ready to…damn it, where’d they go? The minion AI is about as stupid as it comes. In the previous two titles you’d use your thumbstick to ‘sweep’ your minions into position, eviscerating everything in their path. Now, your Overlord points in the general direction and your minions will likely just run over to the nearest Golden (that is to say, areas with grass and flowers) and commit suicide, transforming into pink bunny versions of themselves. This is a non-stop problem with an already expendable force, but it doesn’t really matter — you won’t have them long.

Each level starts with an imperative to kill off some elves, slugs, Paladins, or some other foe. You can tell that it’s time to do this as there is a giant banner that tells you so, as well as Gnarl’s constant insistence of “Weapons ready, it’s time for smiting!” These foes will run directly at you in a straight line, inexorably allowing you to slaughter them wholesale with your ranged attack. With several waves of dead enemies in your wake, you’ll eventually walk past a gate. This gate will slam shut, trapping the bulk of your expendable minions behind it and likely leaving you alone once again. For an Overlord, you are certainly spending a great deal of time doing the heavy lifting. But let’s not dwell on that — it’s time to race!

Why, exactly, am I racing?

If you are completely confused right now, you aren’t suffering some sort of fever dream — I said it was time to race. Each area, and often multiple times in a single level, the rote and pointless fight waves are punctuated by some ill-conceived ‘race’ where you run your evil Overlord through a gauntlet of spikes, fire, and other nonsense that serves only to frustrate and kill any of your brain-dead minions that managed to make it past the gate. Oh, and it’s timed. Your blues won’t be among them — there’s a current bug where they move in slow-motion most of the time.

With the race behind you, it’s time for your next combat/fish-in-a-barrel simulator, and maybe even a boss. There is little in the way of strategy for either scenario, as every level devolves into finding a minion generator and just spamming it while you hammer away at your face buttons to spew minions. Gone are the days of having the right little bastard for the job, replaced with a non-stop meat grinder.

All of the personality of this franchise has been stripped away, replaced with some misguided arcade-like minigame bullshit like you might find on the Google or Apple App store. Minions used to pick up junk as you ‘swept’ them through a kitchen or village, putting chef hats, pots, colanders, Viking hats, and more on their head. Now you simply buy those hats and assign them. Remember when your minions would ride sheepies and wolves? They’ll still say things like “Sheepies?” with no context on-screen in a frankly pathetic attempt at a grab for nostalgia. Even when you do find sheep, they’ll only murder them — provided they don’t get stuck on the environment.

Being an evil Overlord isn’t half as fun without the ability to upgrade your stronghold, so naturally that was removed from the game. Instead you’ll use one of the four currencies to upgrade your minion powers (there are a dozen selected sequentially), your Overlord skills (nine sequential options per Netherghul), or buying hats or weapons. Since everything is handled in the order specified, and all using individual currencies like some free-to-play game, the illusion of choice is paper-thin. That’s ok, though — the interface is so bad you’ll probably avoid it at all costs.

The interface for equipping items, spending points, and generally managing your minions (such as it is) is a hot dumpster fire of awfulness. Clicking the left arrow takes you to the previous minion, but clicking right doesn’t go to the next, instead spending upgrade points. Except when it doesn’t. Sometimes clicking left tries to spend points as well. Or maybe it’s a bug? I can’t say that I cared by this point.

For those of you who read the review of my Origin PC laptop, you are well aware that it is vastly superior to most desktops on the market. Your options for graphical tuning in Overlord: Fellowship of Evil come in the form of resolution and the granular choice of low, medium, and high. None of that matters much, as the graphics are a blend of high-resolution and PS2-era blocky characters with no facial movement. I didn’t expect Uncharted, but I expected better than the villagers from Black and White. The game runs at 60fps and 1080p on my laptop, except when it inexplicably drops into the teens to load the next voice repetition from Gnarl.

I mentioned that Overlord: Fellowship of Evil can be played online with three friends. Turns out, I actually like my friends — I will not subject them to something as bad as all this. In truth, I feel bad for the characters of this game — they are well-written (if not well-drawn) and well-voiced (if repetitious), but trapped in this misguided and painful re-imagining of a favorite franchise. If I’m the Overlord, why can’t I control my minions? If I’m the Overlord, why am I doing all the work? If I’m the Overlord, I am quitting this job effective immediately.

Overlord: Fellowship of Evil is, by a wide margin, one of the worst games of the year. I don’t know what the team at Codemaster was thinking, but they’ve wrecked everything Triumph Studios had built. Either give it back, or let this franchise die -- it has suffered enough, as have we.

Ron Burke is the Editor in Chief for Gaming Trend. Currently living in Fort Worth, Texas, Ron is an old-school gamer who enjoys CRPGs, action/adventure, platformers, music games, and has recently gotten into tabletop gaming. Ron is also a fourth degree black belt, with a Master's rank in Matsumura Seito Shōrin-ryū, Moo Duk Kwan Tang Soo Do, Universal Tang Soo Do Alliance, and International Tang Soo Do Federation. He also holds ranks in several other styles in his search to be a well-rounded fighter. Ron has been married to Gaming Trend Editor, Laura Burke, for 21 years. They have three dogs - Pazuzu (Irish Terrier), Atë, and Calliope (both Australian Kelpie/Pit Bull mixes).
Related Articles: Overlord: Fellowship of Evil
Share
Tweet
Share
Submit