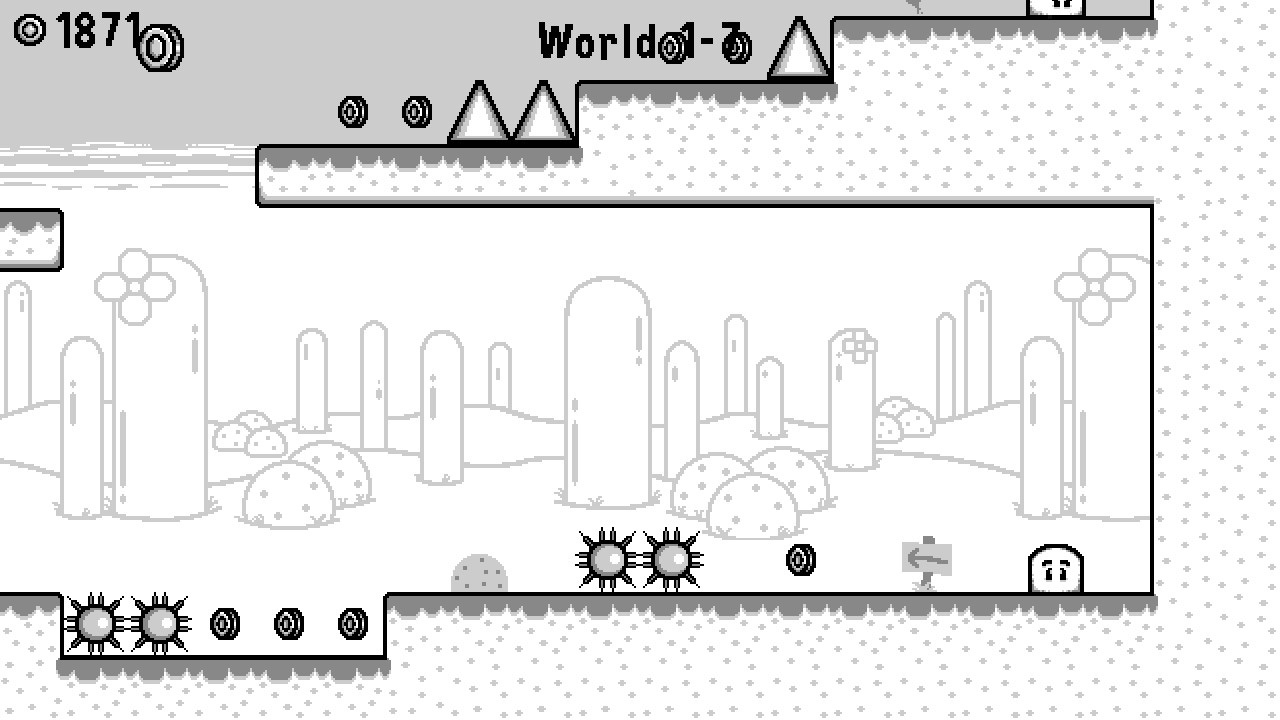 You’d be forgiven for missing Jack n’ Jill when it released on mobile a few years ago, and even with its abundance of visual charm and well-designed levels, the DX release of Jack n’ Jill does little to make this game stand out. This upgraded version comes with various improvements such as cute unlockable hats for your amorphous blobs, Jack and Jill, or different color filters for the game (I was partial to blue myself). DX also comes with several different minigames that will earn you tickets to spend on the many unlockables. The game itself has been left more or less intact in the transition from mobile, and on Switch it feels at home with the system undocked. The game simply feels more valuable when it isn’t attached to the implied scope of a game on my television.

It’s a simple game; controlled by just one button. There are 140 different levels in Jack n’ Jill DX and your character (you get to choose between the simple blob, Jack, or the simple blob with a bow, Jill) barrels ahead on their own, and you simply have to jump at the right time. It’s similar to Nintendo’s attempt to put Mario on phones, Super Mario Run. Like that game, it manages to be interesting despite its obvious limitations. But also like that game, its simple nature undervalues the platforming genre by distilling it down to the bare essentials. You just need to learn to recognize obstacles and tap your way over them. You only have one jump height, so Jack n’ Jill DX boils down to simply hitting the timing.

The game does build over time with new mechanics including a wall jump, wings that let you fly for a stretch, cannons, or speed boosts. Despite levels occasionally having alternate routes, you never really need to make those decisions as you’ll always find your way to the end if you just make the jump right in front of you. Even when the levels layer on seven or eight different hazards and abilities, you still only need to continue forward until you can reunite with your comrade. There are 7 worlds in total and each world will introduce one or two of those mechanics, so that the game doesn’t really get interesting until much later into the game when you have to start recognizing walls that need to be jumped off versus just smacking into them and falling straight down or when a slight bounce off of an enemy is necessary instead of jumping from their heads.

At its best, it is easy to fall into a satisfying rhythm. Even without the the musical focus of some runner games like the Runner series or Game Freak’s Harmoknight, I found myself bobbing along to obstacles as I caught all the jumps and traps at the perfect moment. Where the game started to fall apart was in some later mechanics that seem perfectly reasonable on paper, but in practice they simply detract from what makes Jack n’ Jill fun. Because the game only asks me to hit a jump button, the better level design requires a sort of soft focus; you let the game come to you and you just react. In later levels, though, they introduce the concept of cannons that are aimed directly at hazards, so you need to avoid them until you can hit a nearby switch and get you set on the correct path. But because with no guidance, there wouldn’t be enough time to notice and react, they have to freeze the action to swing the camera over and show that something is wrong. This defeats the whole purpose of the obstacle. You no longer need to make the split second decision and the game just comes to a halt to show you something that the developer realized would be too demanding of its players. I understand why they were put in the game: it opens up the levels in a way that none of the other obstacles do, but it just doesn’t pan out as an actually fun twist on the game.

The highlight of the game, though, is Jack n’ Jill’s visual aesthetic. It emulates the feel of a monochrome Gameboy game, albeit with much crisper edges on everything. But, from the eyes on the moving cloud platforms to the exaggerated spikes adorning many of the walls, it nails the look of some long lost Gameboy classic. Disappointingly, while I enjoyed the simple visual flair of putting a baseball cap or a crown on Jack and Jill, the game had a difficult time handling the added sprite sitting on top of your character. The hat would often cause the character to distractingly and violently stutter its way across the screen. It feels like the addition of these hats from original game was more of a development challenge than it seemed, and I was forced to abandon my backwards cap in favor of a smoother game experience.

The aesthetic carries over into its sound design as well, although not quite as well as the look. There is a satisfying grit and grime to the sound that replicates the scratchy nature of the Gameboy’s sound chip. But as you skid your way through the levels, you’ll be collecting rows of coins that you can cash in to play minigames. The noise that plays when collecting the coins was never able to keep up with the player and it wouldn’t play the chime on each coin. If this sounds like a small gripe, it is, but it became a quick irritant that would often take me out of the game’s necessary rhythm.

Despite some limitations inherent to the scope of a game of this size, Jack n’ Jill DX manages to feel bigger than it is. It’s a fun game at its core with a sizable challenge that is only infrequently impeded by questionable design decisions.

As an anachronistic curio it fits well among a growing stable of small, simple experiences to take on the go. Getting it off the phone and onto dedicated game consoles lends it an air of importance that the game design doesn’t always back up, but it has an endearing style and gratifying challenge enough to warrant reuniting the two oft-imperiled blobs.

Nathan lives in Colorado catching Pokemon on the Go and at home. He previously spent three months interning for Game Informer before coming back to Gaming Trend to spread the good word on video games. His real passion, though, is collecting different versions of the 3DS and other weird Nintendo garbage. It's a never-ending quest for less space in his house.
Related Articles: Jack n' Jill DX
Share
Tweet
Share
Submit