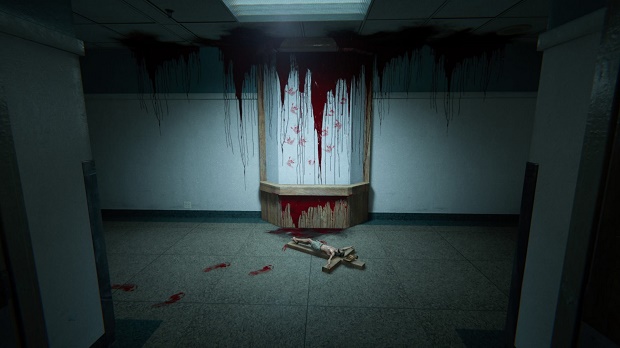 “It’s not just the cult. Two sides. Christians and… something else.”
– Blake Langermann, Outlast 2

For Blake, the cost of following his investigative journalist wife Lynn on an assignment in rural Arizona is more than he could’ve ever imagined. He’s only slightly rattled when their helicopter crashes in the middle of nowhere, but the judgmental eyes glimmering in the dark put him on edge…and then he hears the screams.

Outlast 2 is the follow-up to the wildly popular survival horror game from 2013, set in the same universe but involving completely different characters and complications. The concept is identical: person with a camera gets a tip to look into an establishment or issue, they quickly discover just how deep the rabbit hole goes, and terror ensues. However, it’d be a mistake to write this game off as a copy with better graphics.

Of course, the graphics have been substantially polished. Not only that, but the art style and color palette show stunning changes. In Mount Massive Asylum, you were surrounded by beige and gray, along with plenty of bright red blood. There were so many sections in pitch black that the main thing you’ll probably remember is the pale greenish tint of your camera’s night vision. While the night shrouds your sight in Outlast 2 as well, you’re often treated to organic greens, pops of yellow, and bright blues. It’s not exceptionally vivid, but you will notice a difference.

Improvements have also been made to mechanics from the first game. For instance, you cannot accidentally reload a battery when yours is still partly full; now it will prompt you when you’re getting low and able to swap it out. You’ll find most batteries in logical spots, such as beside flashlights or radios, instead of entirely random places. Now you have the ability to collect bandages and heal, and an external microphone has been added to your camera so you can listen for anyone close by while you’re hiding, rather than peeking or wasting your battery with night vision. Your camera records specific scenes you encounter, and playing them back reveals Blake’s thoughts. Every note you find is photographed and saved for review along with your videos.

I was curious how this new game would make the switch from the confines of an asylum to an open world model, but the team at Red Barrels was able to design linear progress even in an outdoor environment. Rocks, trees, fences, and houses offer structure and boundaries. It’s similar to being guided through hallways and rooms, but you don’t feel as restricted. Claustrophobia was a big theme in the first game, while this one leans more toward confusion and being lost within a world you can’t comprehend.

After a bit of exploration, you realize that the religious fanatics you meet aren’t part of one cohesive community but two warring factions. One, seemingly a horrific offshoot of Christianity, is led by Father Sullivan Knoth, along with his beloved brutalizer Marta and favorite disciple Laird. Knoth is a Big Brother-type figure, ever-present in portraits throughout the houses of his loyal following, but a cold and emotionless man in person. The other is a group of sex-obsessed heretics led by androgynous outcast Val, who is down in the trenches with the devoted, swamp-like tribe and of the belief that spirituality and sensuality are one in the same.

The setting in Outlast 2 switches between the cult-like town of Temple Gate in present day Arizona and a Catholic school building from Blake’s past. One minute he’ll be taking a fall in the real world, and the next he’ll be standing up in a hallucinated classroom. At some point you begin to intuitively predict when the transitions will happen, but they are still smoothly and artfully done. It all comes together to create a nightmarish scenario from which you fear you’ll never wake.

This game is much more than cheap jumpscares and an overload of gore. In fact, in some ways I came away feeling like this was more tame than the previous titles, because you see a lot of already dead bodies instead of people being killed. However, it still skillfully fashions a tense atmosphere and crafts heart-pounding chases with multiple enemies. The maze-like area design could be frustrating at times but ultimately pursuit sequences didn’t take too many tries to figure out. Mostly I was preoccupied clutching my chest and letting out frightened gasps.

One of the only disappointments of this follow-up is that the original was more character-driven, but this one centers around the player character Blake. His surroundings, real or imagined, aren’t much more than a backdrop for his inner demons to play out across. Upon reflection, this does make some sense, because the cult members are of one mind, while the first game made Miles a bit of an everyman focused on recording the stories of individual asylum residents.

Besides dealing with Blake’s personal trauma, which I won’t get into because of spoilers, Outlast 2 explores the many ways religion and spirituality are expressed. There are the extremes of hatred and love, with Knoth and the heretics on opposite sides of the same coin. Then there’s corruption and abuse of power in Blake’s former life. In human hands, the idea of God quickly turns to selfishness and violence, a disgusting manifestation of what should be pure.

The story of the game is highly open-ended with many theories to be discussed. Because of my prior knowledge of the series, the ending was much more subtle than I expected. It still made an impact, but in a quiet and ambiguous way. As a whole, Outlast 2 is an amazing game, and the conclusion does little to lessen that feeling. The attention to detail, from gorgeous snowy scenes to Biblical references and plagues, is simply excellent. The AI is incredibly smart, and the sound design is haunting. While I wish more aspects of Temple Gate would have been explained, overall I am satisfied with my experience and leaving some things up to speculation.

Outlast 2 has all the makings of a good horror game: alarming visuals, intense situations, menacing antagonists, and an overwhelming feeling of powerlessness. Though I would have liked the world of Temple Gate to be developed more beyond Knoth’s Gospel, I loved every minute of my playthrough.

Sarah Marchant is an office admin for a nerdy t-shirt company. She has a soft spot for indie games, a passion for story-driven titles, and a weakness for cooking games and anything with zombies.
Related Articles: Outlast 2
Share
Tweet
Share
Submit