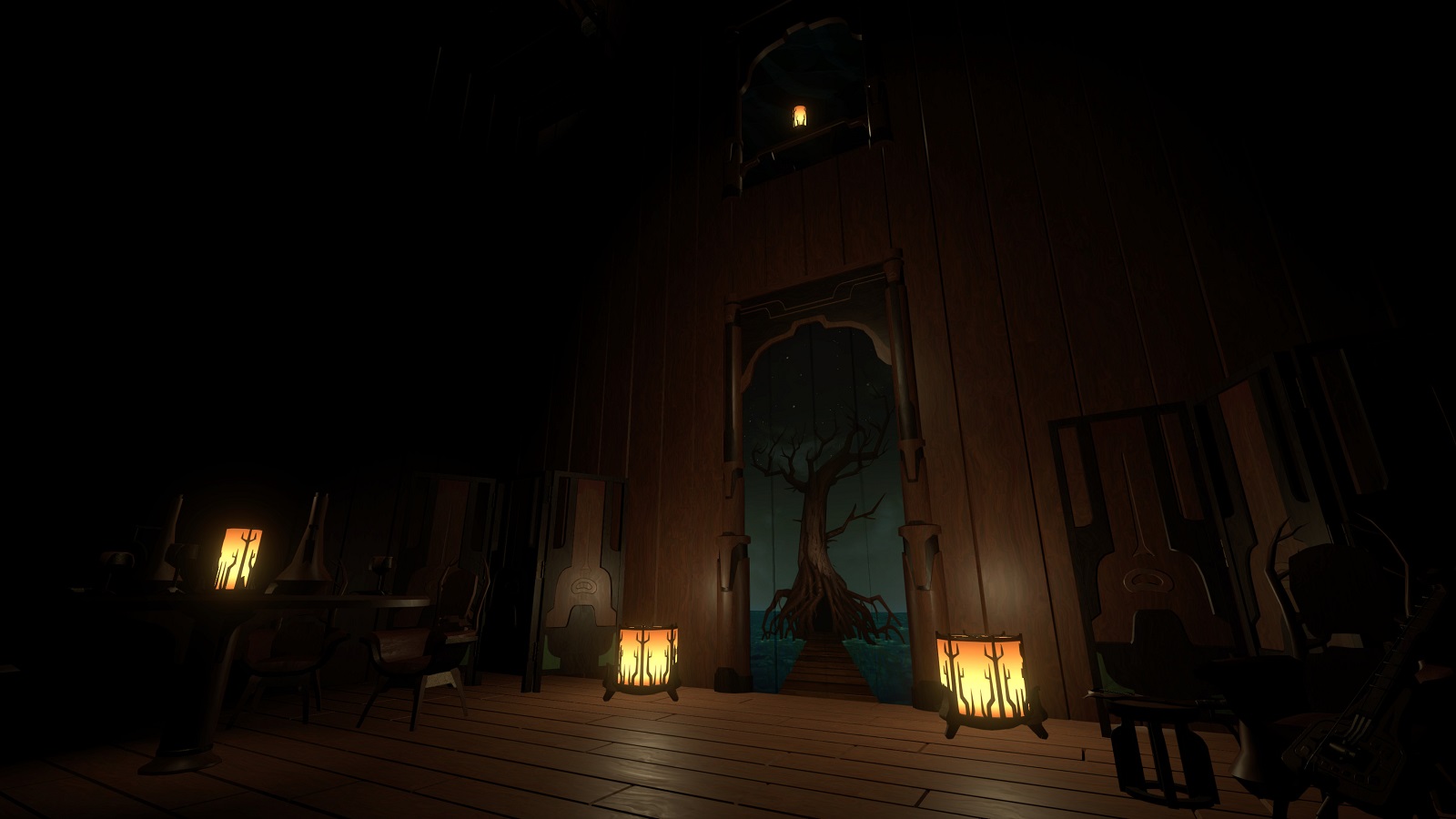 Note: The review avoids specifics but does discuss general mechanics, environments, and themes present in the DLC.

It’s hard to express how much Outer Wilds has meant to me over the past two years. I reviewed it when it was first released, and I liked it a lot! The experience was one of a kind, and any issues I ran into did little to tarnish my opinion of it. It was an imaginative loop-based adventure with incredible attention to detail. But then, I let it go. Maybe it was because I rushed myself; I didn’t give myself enough time to digest my experiences and really feel those feelings. For whatever reason, Outer Wilds exited my mind, entirely. That only lasted about a month.

For the rest of 2019, no other piece of media occupied as much space in my brain as Outer Wilds—I’d easily call it my game of the year. By the end of that year, all those individual details and memories had coalesced into a formless mass of loose opinions and emotions. Anything other than the general framework of the mystery was gone from my mind. It wasn’t until 2020 rolled around that I decided to play through the game for a second time. Lo and behold, I loved it even more! Outer Wilds reignites that childlike sense of wonder that you rarely get to channel as you get older. It offers this freeing feeling that you always worry you’ll never experience again. It’s a thoughtful meditation on the joy of discovery, the beauty of knowledge, and a reminder to stay curious. 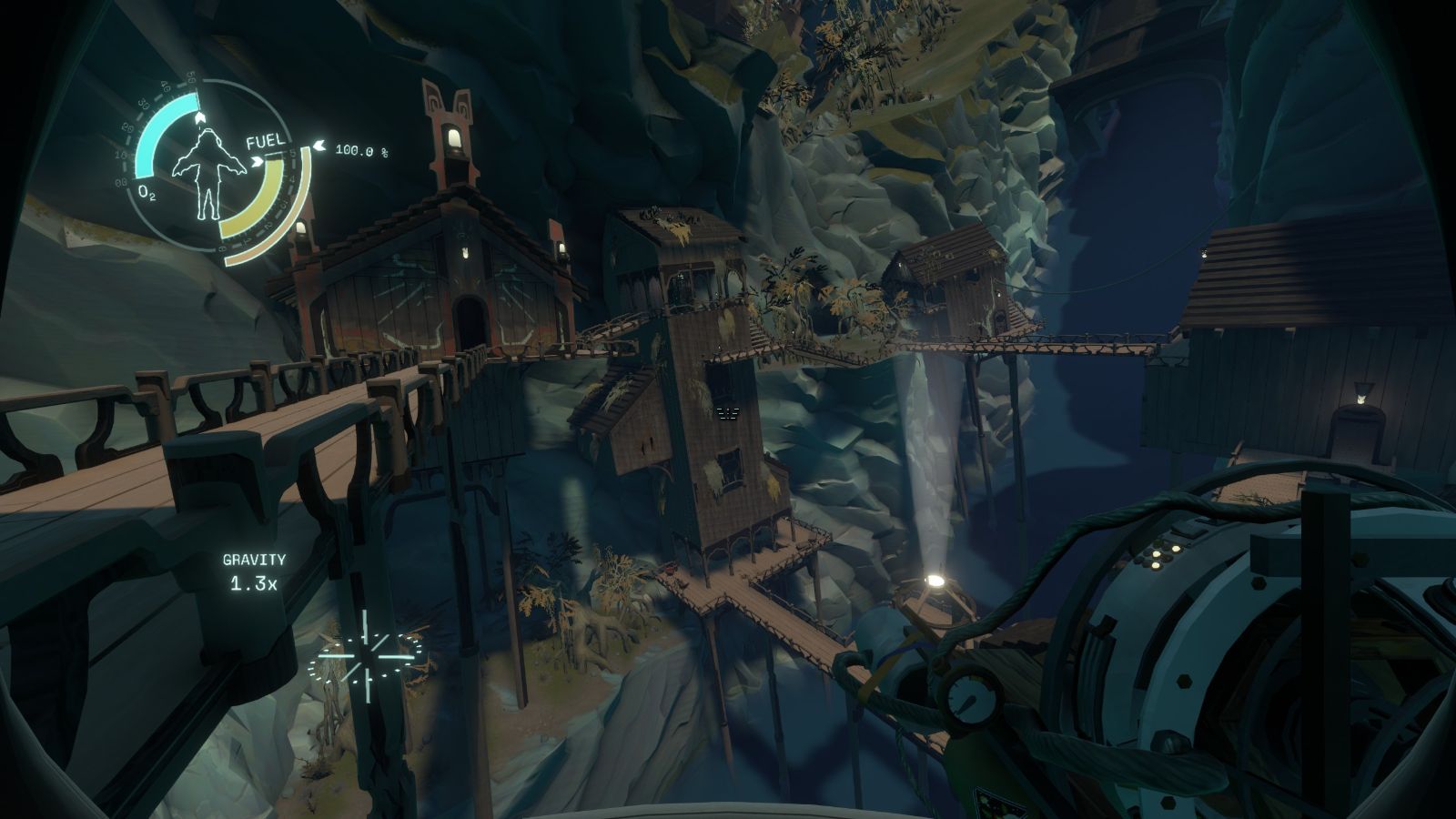 More concretely, it’s a first-person, time-loop adventure game—which I suppose now joins a decently sized crop of time-loop games. You, a fresh-faced astronaut, task yourself with solving the mystery of your solar system’s Groundhog Day situation. Every 22 minutes, the universe hits the hard reset button; the only things that survive are what you’ve committed to memory (and your ship’s computer). In the base game, I deciphered ancient texts and tracked mysterious signals to their origin. I explored different planets, hunted down rogue celestial bodies, and solved a multi-faceted mystery hundreds of thousands of years in the making. In Echoes of the Eye, most of those activities never made it onto my to-do list.

It still manages to be everything you could’ve hoped for in an Outer Wilds DLC—it just comes in a package you never would’ve thought to expect. What I got was technically more the same but in the best way possible. There’s no new solar system to explore. In fact, you can complete the DLC without ever landing on a single planet. Echoes of the Eye is, in the literal sense, a self-contained adventure. The entirety of the DLC is housed inside an alien-made ringworld called The Stranger.

Compared to the aesthetics and architecture Outer Wilds serves up in the base game, The Stranger certainly finds more in common with Hearthians than the Nomai. The woodsy, folksy stylings tap into the nostalgic, whimsical undercurrent of the game. Of course, in this solar system, form is nothing without function. The ringworld’s design makes it easy to navigate and even easier to compartmentalize your discoveries. Lost? Just look up. The Stranger even manages to be its own map! With my destination in mind, I hopped onto a raft and let the massive river carry me from one point of interest to the next. 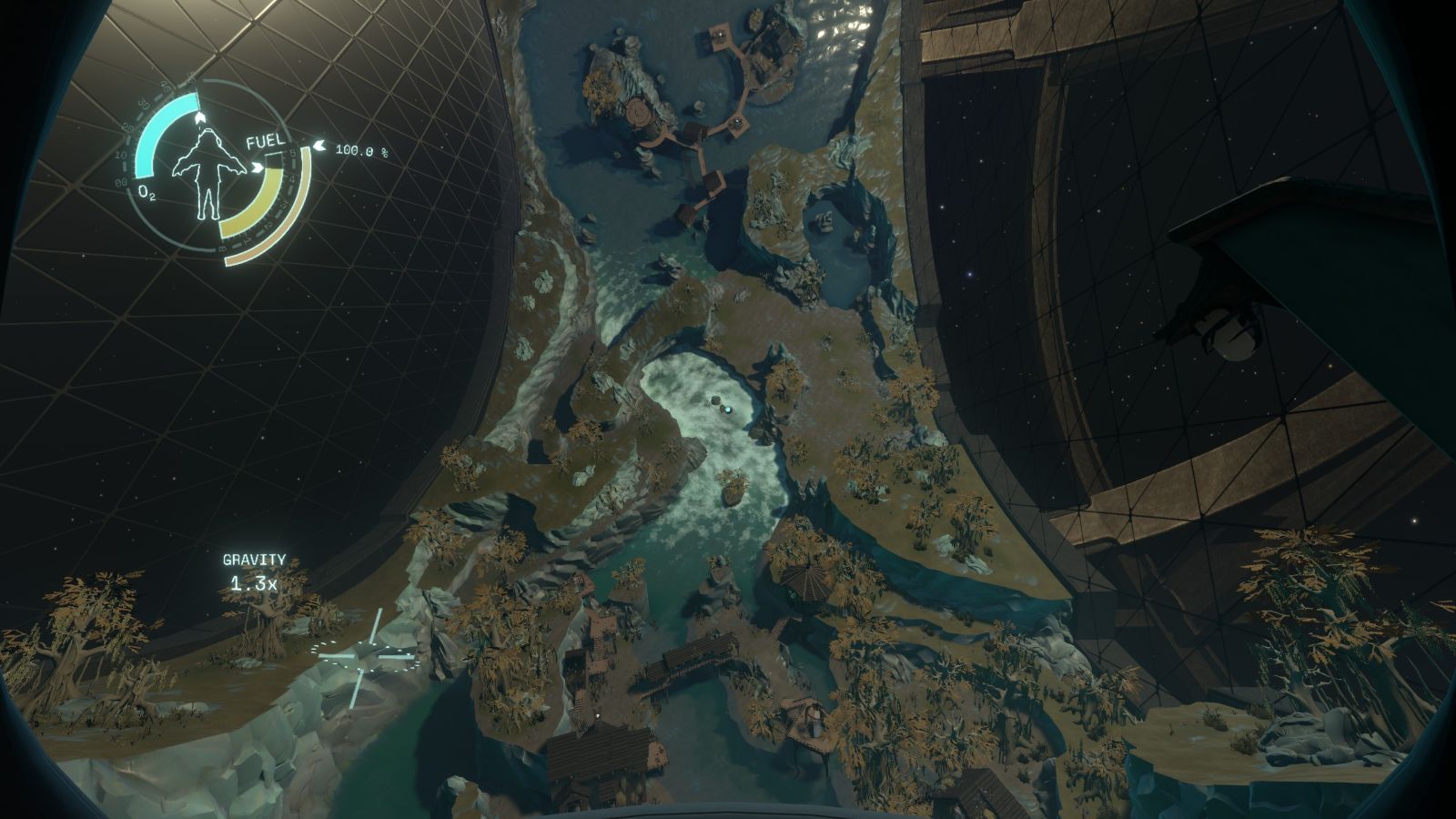 Taking this loop imagery to another level.

And it’s there on my little raft—picking up speed on the water as the music swells, still replaying recent discoveries in my head—I get hit with that feeling. My fellow Outer Wilds enthusiasts already know the one: freedom, genuine excitement, and a thirst for answers you know won’t disappoint. Despite how it may appear on the surface, The Stranger delivers on a journey teeming with eureka moments, enough to leave me in a perpetual state of awe. It takes the mechanics and beats you’re accustomed to and revitalizes them with imaginative twists and evolutions.

Echoes of the Eye gives your gadgets a bit of break and taps in light to play the lead role. Much of the tech on The Stranger, including the rafts, ask you to learn the ins and outs of the stuff. Returning players will feel at home solving all the new puzzles, which are thematically in tune with the Quantum Rules. The game thrives in this new environment and modified ruleset; the sheer amount of ingenuity rivals the base game, if not exceeding it in some regards—all without double-dipping!

With the focus on light comes an even greater emphasis on visuals. Scattered all throughout are slide reels and alien home movies that take over for the translator. While I was initially worried that the move away from text meant more spoiled surprises, my fears were unfounded. Understanding the context is still paramount, but as they say, a picture’s worth a thousand words. Each reel’s musical accompaniment, a few more. The jump to visual-oriented logs gives Outer Wilds more control over the delivery of information and Mobius Digital doesn’t let that go to waste. I do, however, miss reading conversations between characters and connecting with the Nomai on a more “human” level. There’s a different kind of charm here with tremendous payoffs, though I’ll forever feel like there’s something missing. 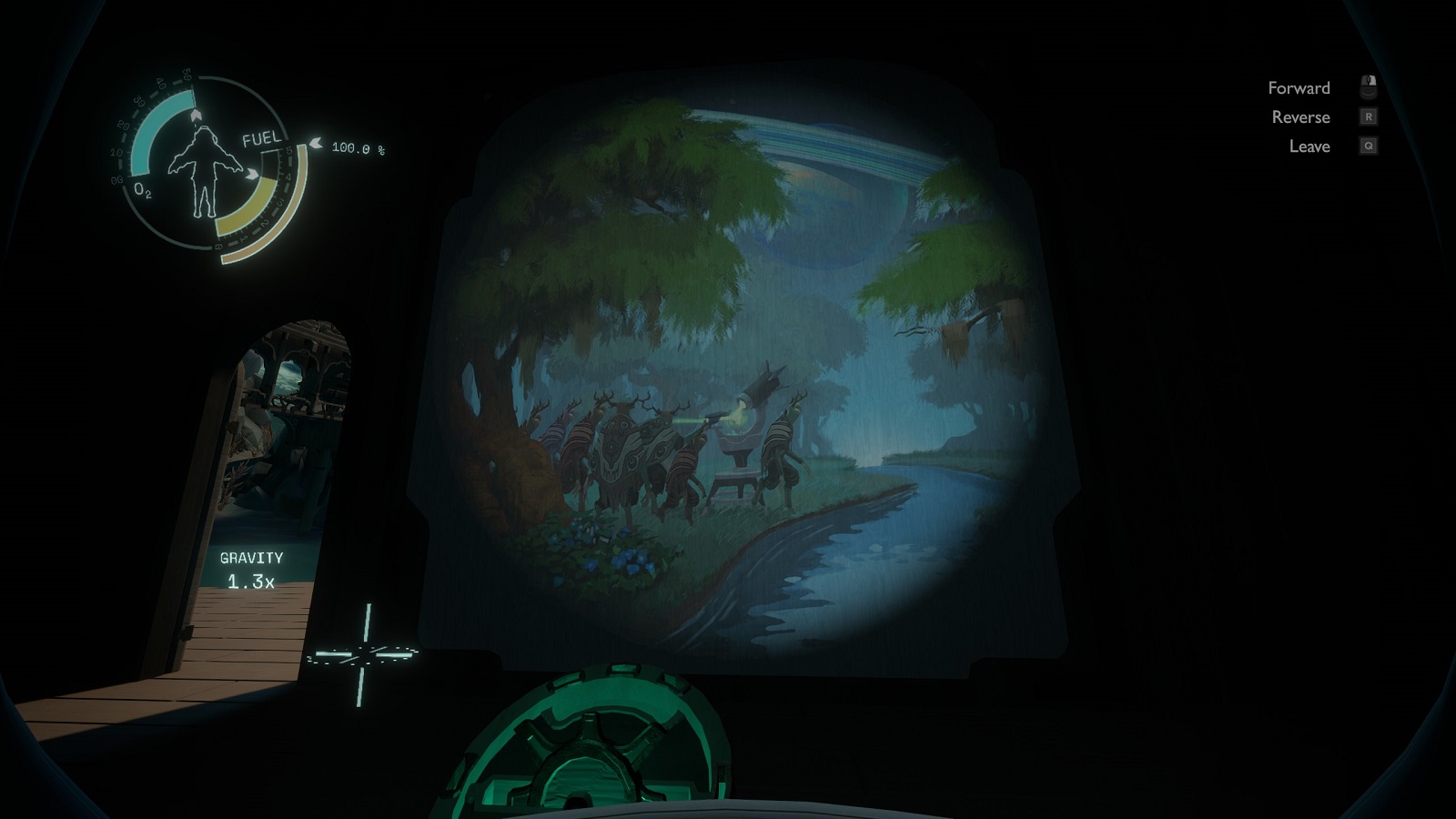 This is easily forgivable thanks to strong environmental storytelling and arguably the best level design in Outer Wilds. Without any other planets to switch up the tempo, The Stranger is tasked with the near-impossible job of keeping an adventurer engaged from start to finish by itself. It might be the two playthroughs talking, but I was stumped far less often in Echoes of the Eye. Those awkward hitches towards the end of the base game were my biggest gripe; the pacing here was perfect. Each settlement on the ringworld hits the sweet spot, hiding enough secrets to fuel your curiosity without overwhelming you with too many leads.

Much of that comes courtesy of its total mastery over visual language. More often than not, a couple of seconds is all it takes to catch on to how a space can be navigated or a piece of tech can be used. The environments both guide you and hide secrets right under your nose. It makes you see exactly what you need to and just a touch more. Subtle signifiers consistently point you towards new locations and secrets to keep the ball rolling. There are so many layers to the mystery and much of it is teased in the environment. Every little detail has something to say about the former inhabitants’ culture and history, often serving a functional purpose as well. 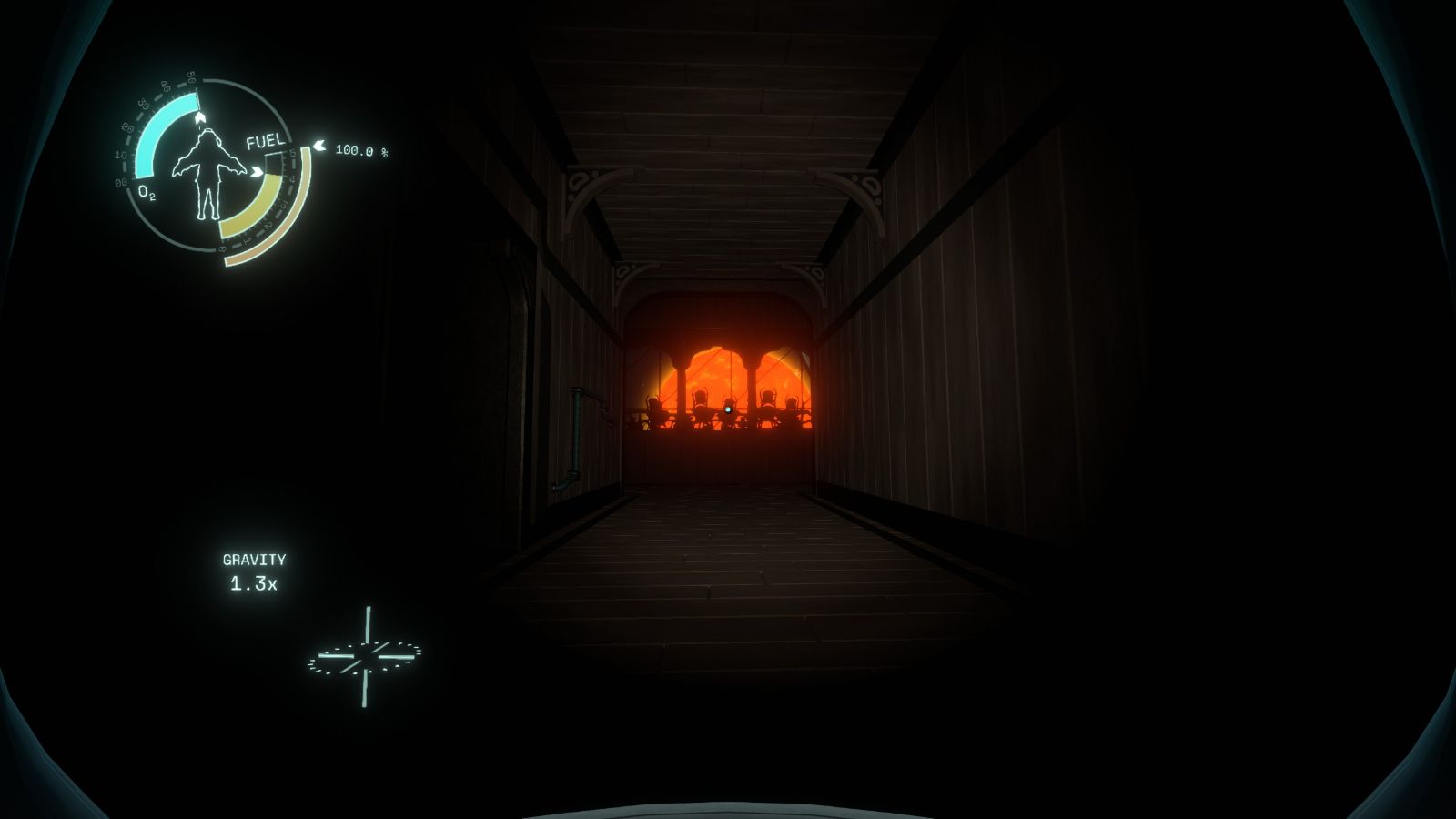 More clues lying in the shadows…

If there’s one genre that loves its light mechanics, it’s horror. When I booted up Outer Wilds again, I was completely blindsided by a new prompt warning me of potential spooks. The options menu also introduces a new toggle to tone down the scares. Admittedly, I’m not exactly sure to what extent this toggle affects certain mechanics and additional surprises—it certainly doesn’t drop the difficulty of those segments. I imagine it might have something to do with a few other scary spoilers that the DLC sneaks into them. If you can recall a certain hair-raising skill check at the very end of Outer Wilds, you’ll have the gist of what goes down in Echoes of the Eye.

Stealth segments in pitch-black punctuate the end-game, turning light into equal parts blessing and curse. These were unexpected, but like every previous addition, they made for some incredible sequences and contributed greatly to the new rollercoaster of discoveries and emotions. It’s the most challenging and time-consuming content that Echoes of the Eye has to offer. The amount of prep work needed to retry these challenges might border on annoying, however. More could be done to help players without an affinity for horror. I didn’t struggle for too long, thankfully, closing out the DLC after 10 amazing hours.

Echoes of the Eye is a microcosm of Outer Wilds fit with discoveries that feel just as huge as any in the base game. Thematically, it explores a race that is the antithesis of what the player and their journey represent, and it uses that conflict as the backbone for a meaningful narrative. Mechanically, it takes what players are accustomed to and retools it, opening the door for new, creative puzzles with extra creative solutions. It continues the Outer Wilds tradition of nurturing curiosity, encouraging you to ask your own questions then seek out the answers. This is self-driven exploration at its finest, and a testament to the power of players’ imaginations.

Outer Wilds: Echoes of the Eye

Everything you wanted from an Outer Wilds DLC in a package you never thought to expect. Echoes of the Eye puts its own twists on the base game’s formula without a single misstep.

A self-deprecating, overly sarcastic pair of glasses that occasionally possesses a human host in order to partake in the delightful process of playing video games, then immediately complaining about them. When he is not playing games (a rare occurrence), he can be found either writing about things that no one cares about, or haunting the quiet streets of his Canadian suburb.
Related Articles: Indies, Outer Wilds: Echoes of the Eye
Share
Tweet
Share
Submit