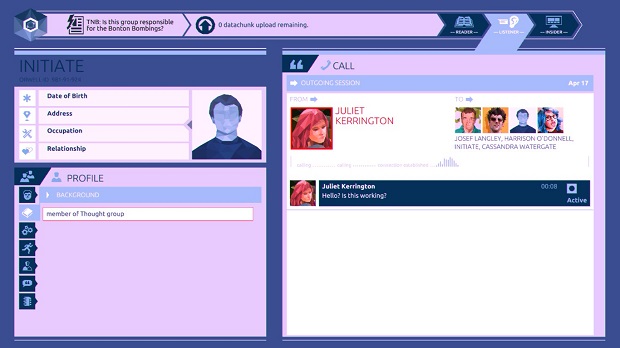 Just how much of yourself do you share online? Would you say your computer files and your social media accounts accurately reflect your personality, interests, and motivation in life? Even when it comes to acts of terrorism, how much right does the government have to invade your digital privacy? Orwell deftly explores these ideas and more over the course of five episodes.

The game opens with surveillance camera footage from a place called Freedom Plaza. As the video plays, anyone milling around the area is scanned for facial recognition. Most people do not have files in the police database, but one blue-haired girl named Cassandra Watergate comes up due to a prior arrest. Almost immediately after she climbs onto a departing bus, a bomb goes off at the fountain in the middle of the plaza. Was she the one behind this act of terror? If not, who was?

Symes, your adviser, introduces you to the surveillance system that will help you solve this crime: Orwell. It’s brand new and ready for testing by investigators such as yourself. The program allows you to browse the internet, snoop on emails, listen in on phone conversations, and even hack into personal computers. Loads of information is now at your fingertips; it’s up to you to sort through it and gather evidence.

Nothing about the menus of Orwell indicates that it’s a game; it’s entirely cloaked in the appearance of government surveillance software so you’re instantly immersed. You’re tasked with combing through files and in-progress conversations, uploading any notable pieces of info (or datachunks) to Orwell so they can be used in the investigation. Soon enough, you’ll be clicking through Cassandra’s connections and spying on anyone suspicious enough for the government to consider them a target.

The reason you’ve been hired is because Orwell is only a computer program; it has to interpret any data it’s given as fact, overlooking any human nuance. For instance, if your friend changed their Facebook profile picture to one of a dog, you would know that they didn’t suddenly turn into a dog, but the software wouldn’t. Similarly, when Cassandra and her friend Juliet are chatting in comments about going out clubbing, and Juliet claims that being baked muffins as a bribe is “torture and cruelty by my friend,” you know she hasn’t actually been tortured. However, if you uploaded that particular tidbit into Orwell, it would take you very seriously.

Because of this, you have to act judiciously. Your goal is to determine the intent of the bombing – terrorism or political protest – and figure out who was behind it. Anything that isn’t relevant, from interests listed on a social profile to someone’s romantic history, has no place. Or does it? Therein lies the question. Will it end up mattering that Harrison has two insurance policies and Nina went to the doctor about a leg injury – and how do you feel knowing this much about their private lives?

Many datachunks unlock related documents for you to browse. For example, when Cassandra refers to her parents as “big pharma,” the system is able to find their business website. I tried to uphold the code of ethics you’re shown in the beginning, about how all this investigation is in the name of peace, but often curiosity got the best of me. Did someone’s bank account information come up in an email? You better believe I’m using that to see where their money is going.

You easily get swept up in everything that’s going on. The mystery deepens with each episode, treating you to shocking revelations and dramatic cliffhangers, as you learn how your suspects’ lives are tangled together. As Symes always says, nothing is a coincidence.

It’s up to you to prevent further tragedy, but the path there is hardly straightforward and mistakes will be made no matter how much you disclose. Even though you’re essentially responsible for the safety of an entire country, does that mean letting a small group of possibly innocent people take the fall?

Simply put, Orwell is ridiculously gripping. The music sets just the right suspenseful mood, with a dramatic shift when important details are uncovered, and the role you play makes you feel heroic and dirty in equal measures. Not only that, but the story it tells is interesting beyond just the political aspects. It’s a genuine mystery with surprises around every corner.

While it isn’t perfect, with datachunks being difficult to drag over at times and a slight wait loading once or twice, these small issues didn’t impede my enjoyment. In fact, I’ve already completed a couple of playthroughs and am starting on a third, with each one lasting about 2-3 hours. It’s more than worth it to unlock new achievements and see how your choices impact the narrative. Without a doubt, Orwell is one of my favorite games from this year.

Orwell is a thought-provoking game about privacy, politics, and ethical dilemmas such as sacrificing a few in favor of the whole. With immersive visuals and a multi-layered story, it will instantly pull you in. This game offers high replayability and starts much-needed conversations in this age of technology.

Sarah Marchant is an office admin for a nerdy t-shirt company. She has a soft spot for indie games, a passion for story-driven titles, and a weakness for cooking games and anything with zombies.
Related Articles: Orwell
Share
Tweet
Share
Submit