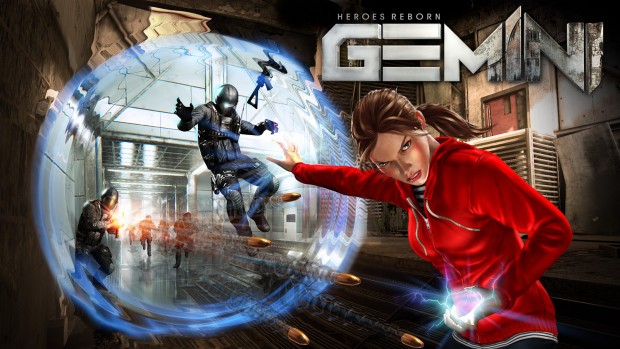 As a tie-in game to an already cancelled TV series, I was worried about the game from the first time I heard about it. Rarely do games based on TV or movies do well, and being the product of a cancelled TV show killed any hopes of the game being good. Luckily for Gemini: Heroes Reborn the game actually holds up and has some great ideas and gameplay, but also falls short in areas.

Gemini: Heroes Reborns gameplay has some fantastic ideas and is downright fun, but fails to fully utilize what it brings to the table. Given a set of different powers such as slowing down time, switching between two different times (past and present), telekinesis, and more. The powers are all done extremely well and is by far the greatest part of the game. Time jumping is what sets the game apart and makes it not only interesting but allows great puzzles, ideas, and ways to tackle enemies. You can jump into the past where the environment you’re in is a set of buildings that are clean, beautiful, and well maintained. Jumping into the present brings you to the exact same environment, only after the buildings have been destroyed, and you are left in a decaying, broken, and extremely dilapidated place. Jumping between the two very different settings is a rush and very cool to see the exact same area in different ways. Along with the ability to time jump, there is also the power of time scout. Time scout lets you see into the two times without actually jumping. This allows you to see enemies, different puzzles, and the environment to plan how to go about things before making the jump. It was a joy to scout enemies and then set-up ambushes to get through them. Many puzzles and paths are blocked through the different times making time scouting and jumping necessary during the whole game.

While the powers are done amazing, there is some gameplay elements that really hold the game back. The AI in the game is boring and easy to get by. Enemies really just chase you and shoot, without flanking, making plans, or really doing anything except standing around until they see you, and then shooting and charging into you. Also as you progress the enemies become much more powerful and can ignore some of your abilities. In theory this makes sense, however it makes you question your progress. Without any real weapons it becomes tedious to use your telekinesis to throw things at enemies, time jump to heal, time jump back, and throw more stuff.  Also with enemies being able to ignore or block your powers, you never feel strong. As any superhero-esque game I want to feel my powers grow and become powerful, and the way the enemies are made, I never felt that progression.

There is also a light parkour like system. I have heard it compared to Mirror’s Edge, but in my opinion it acts much more like Dying Light’s fluidity and style. There are puzzles and the environment is set up for using this system and it feels good. However due to the linear style gameplay you can only really use the parkour-like system when the game wants you to which is a bit of a letdown.

Although the story is intriguing at times, I could not get into it. It plays and feels like an origin story and nothing stands out as great writing or acting. The voice acting lacks and fails to immerse me into the story, and the story itself is predictable and mediocre. Thankfully the game is enjoyable, and the powers make up for the lackluster story that is built in. As with many aspects of this game, the story just fails to feel polished and lacks the tools to bring me into the world.

The graphics and sound are also hit-or-misses throughout the game. Using the Unreal Engine 4, the game can look downright pretty at times. However certain areas are more polished than others, there is a lot of texture popping, and some graphical bugs that really take away from the immersion and beauty that the game has the potential for, but rarely shows. The sound effects are mediocre and the voice acting ranges from solid to almost laugh-worthy. The game needs more polishing, and more time in development, as it has some great visual and audio moments, but it never accomplishes it for more than a few moments at a time. I also had some problems with the game crashing and other bugs during my playthrough, which was frustrating to say the least. The whole game has this problem, the ideas and executions are done so well it becomes an amazing game at times, and at others it falls so short it doesn’t even feel like the same game.

The game’s greatest downfall however is its length and replayability. Even with the cons I have listed, I had a blast playing this game and would recommend it to most people, however mymy first playthrough only took around 3-4 hours and that included a lot of exploring. It is a very short game and once you play through it, it really has no replayability. The levels and design are very linear and force you to use powers in a certain way, making it hard to justify playing it again or trying to play it in a different style. If the game were to be closer to the 8-10 hour mark I would be raving, because it is such a fun game but ends so soon.

Although it has problems going against it, Gemini: Heroes Reborn has some great ideas and fun gameplay that make-up for it’s shortcomings. I recommend this game, and although it falls short it is definitely worth the $14.99 price tag.

Growing up in a small Colorado town, Bryan has always had plenty of time to play games. PC is his first choice of tech followed by the PS4. Graduating at 16 Bryan knew he wanted to be a writer and wanted to combine his love of games into that and found Gaming Trend in 2012 where he quickly became a member and started writing for them as soon as he could. He is still at Gaming Trend, but now has 2 kids, a puppy, and a lot less time to play the games he loves, but he always finds a way to get back into gaming.
Related Articles: Gemini: Heroes Reborn
Share
Tweet
Share
Submit