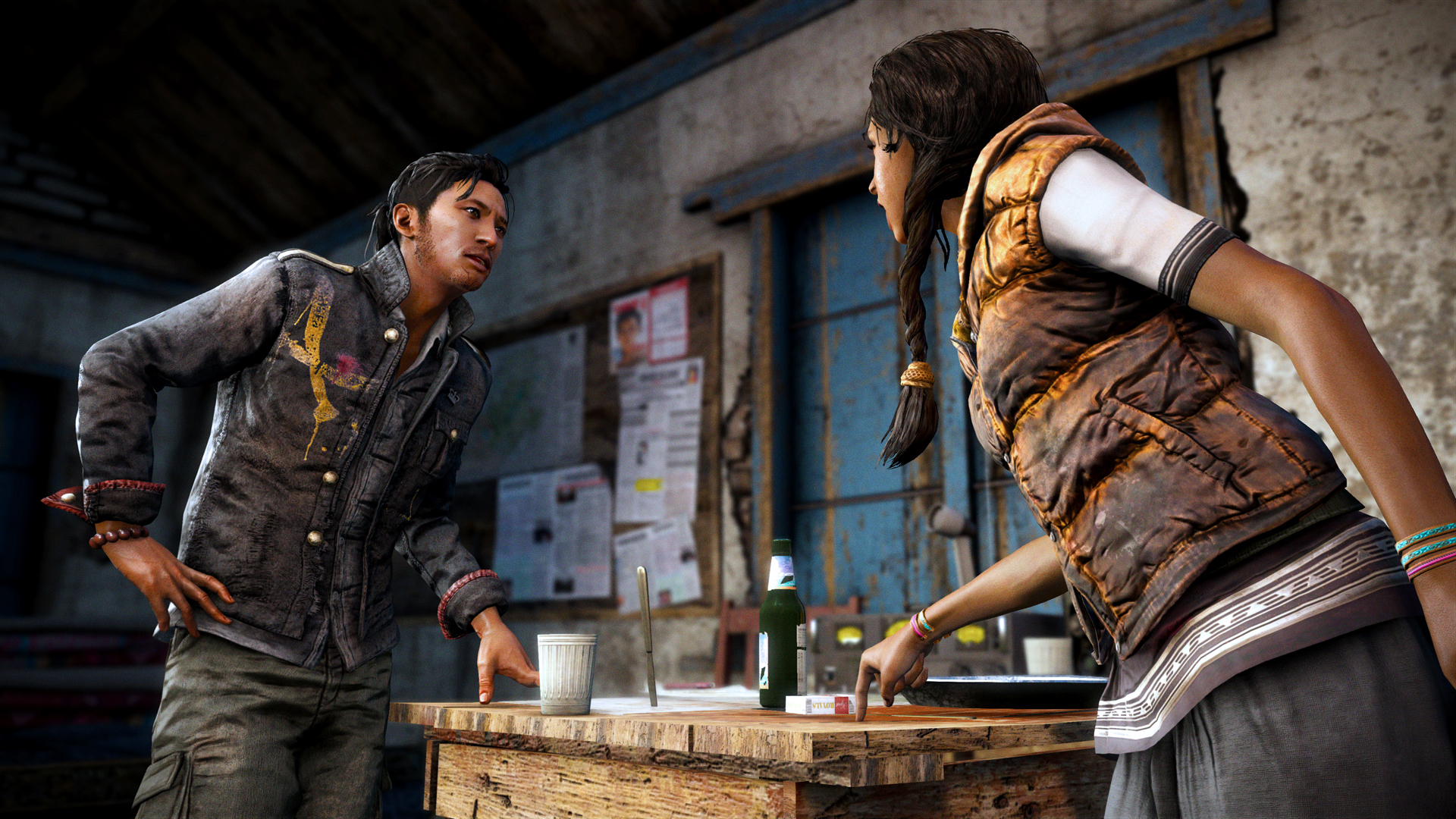 The Far Cry series has long been an eclectic one. The series started off as a fairly basic first person shooter, but began to morph into something else in and of itself. By the time the third Far Cry rolled around, the series had turned into an immensely entertaining joy that many considered one of the best games of 2012. The latest installment in the series, Far Cry 4, continues its trend towards the insane by introducing more weapons, more territory to explore across, and, most importantly, elephants.

In Far Cry 4, you play as Ajay Ghale, the son of Mohan Ghale. Mohan was the famous leader of The Golden Path before his unfortunate death. Ajay was raised by his mother stateside, but is visiting Kyrat to fulfill her final wish of spreading her ashes back in her homeland. While on his visit back to Kyrat, he is captured by Pagin Min, the villain of all villains in the Far Cry 4 world. Before being shown your demise, you are rescued by The Golden Path and are then asked to play an integral role in helping them to rise back up to help the people of Kyrat.

One of the larger complaints about Far Cry 3 was the storyline and how seriously it took itself in such a comical world. Far Cry 4 continues along the same path as the fiction within the game is delivered in a very serious, sometimes dire tone. That is, for a majority of time. There are a few characters littered throughout the world that thumb their nose at the story as you might hope, though they are far and few in between. For the most part, characters stick to telling a straight-ahead story about the factions within Kyrat.

The narrative in Far Cry 4 begins atypically and continues along that path for the majority of the game. Apart from your run-ins with Pagin Min, it is rather tough to care about the happenings with Ajay and exactly what his future holds. As the narrative progresses, you begin to see a heavier presence of mystical forces that, while fitting for the culture of Kyrat, still manage to feel a bit disjointed from the original story. Overall, the tale woven never becomes too distractingly bad, but it also lacks any impressive qualities that keep you gnawing at your fingernails for more.

While some of the characters may be hit or miss, one that most certainly is not is the aforementioned villain Pagin Min. Far Cry 3 featured a fantastic villain in Vaas, a character just as psychotic as he was entertaining. This left a huge question of “How do they top him in Far Cry 4?” While topping him is a daunting task, they definitely matched his presence with Pagin Min as he strengthens up every sequence he enters. Whether it is taking selfies with the main character before declaring his intentions of murder all the way to going on about how he wants Kanye West to visit him in Kyrat, Pagin Min is a glorious character that does not disappoint.

Another strong character is the rarely seen DJ Rabi Ray Rana. He will appear over your radio within every vehicle as he spouts multiple witty lines. The topics he hits on vary from political to social issues and consistently add more life to the world of Kyrat. The character is played by Hindi comedian Hasan Minhaj (newest Daily Show with Jon Stewart correspondant), which shows as the lines are delivered very well.

While story is an integral part of any game, the gameplay of Far Cry has always been the biggest draw. With such an impressive job performed on the mechanics in Far Cry 3, the agenda heading into Far Cry 4 had to be “build that again, but more.” If that was the agenda, they met it to a T. The gunplay has remained some of the best around. In this iteration, the folks over at Ubisoft have tweaked certain aspects like sound design on the weapons to enhance the experience and make it feel more intense than ever.

The weapon selection is vast in Far Cry 4. There are over one hundred plus total weapons including main hand weapons, side arms, and signature weapons. These signature weapons are some of the most interesting ones found within the game. While you will still spend a majority of your time with your standard SMG, signature weapons can be very valuable commodities later in the game and even in subsequent playthroughs. The prices of signature weapons are very high and require some side mission doing to be unlocked, but once they are available, it is best to hop on them as soon as possible.

Of course, there are a variety of options available for you to partake in across the world of Kyrat. The two staples of Far Cry 3, the outposts and radio towers, are still active and just as fun to take over this time around. You can also go through assassination, racing, and hostage activities. These all sound simplistic and mindless, but they are actually a blast to tackle thanks to the pinpoint design of Far Cry 4. These side activities are a wonderful way to just mindlessly run about the gorgeous world.

Traversing across the world is now much easier in Far Cry 4 as opposed to the drudgery of Far Cry 3. It took hours of gameplay before you received your wing suit in Far Cry 3, but you receive it in Far Cry 4 within the first four hours. This allows you to jump off one of the many (many) cliffs found in Kyrat and simply glide a few hundred feet to your safe, parachute-assisted landing. There also seem to be more fast travel points and better spacing between the cities, meaning the travel times are greatly reduced. You can also set your car to auto drive to any waypoint you set, granted the car will drive much slower than the average player.

If you want proof that videogames are beginning to look more and more impressive on the current generation consoles, look no further than Far Cry 4. The lush environments are colorful and pleasing to the eyes. There is also a very large draw distance with mountains and buildings far, far off being clearly visible. The looks also fit the atmosphere of Far Cry 4 perfectly, eliciting the sort of Indian-culture that the story lays on so heavily. This makes for some of the most beautiful menus around, with light orange and light blue popping at every menu option. Visually, Far Cry 4 is pretty hard to beat.

As for the unique action within Far Cry, that is still very prevalent in Far Cry 4. It has a certain Battlefield-esque aura to it, as you never know what crazy open-world nonsense will happen next. For example, a hippopotamus was attacking me, so I naturally turned around and ran. During that run, I spotted an elephant and hopped onto its back. I then proceeded to lead an elephant-on-hippopotamus head-to-head battle. It was one of the silliest, but by far most entertaining sequences I have experienced in a videogame this year.

There is a traditional multiplayer experience to be found within Far Cry 4, though it is a very basic one. The multiplayer has team deathmatch, domination, and the other standard multiplayer modes you have come to expect. Unfortunately, the Far Cry 4 gameplay does not lend itself well to multiplayer, as the entire experience feels half-baked and forced. Apart from the 5 vs. 5 gameplay, you can also download user created maps and play through their self-designed combat scenarios. These situations are never as exciting as the ones found within the story mode, but it is quite a bit of fun to see what the community can create and just how crazy their designs can get.

Of course, one of the biggest aspects Ubisoft has been pushing in Far Cry 4 is its brand new co-op. The co-op is full open world and allows you to experience all the same insane situations with a friend. There seems to be very little to no server issues, only issues finding random co-op partners. Most people seem to only be interested in popping into a game, then popping out ten minutes later. You do carry your money and experience in between the co-op and your main story. The co-op mechanics work near flawlessly, but they are far from overtaking the core gameplay as the most impressive part of Far Cry 4.

There was heavy skepticism arising when it comes to Ubisoft Montreal being able to top Far Cry 3. Not only was Far Cry 3 a very impressive game with excellent gameplay, it was not even two years ago when it hit store shelves. Despite that, Far Cry 4 tops Far Cry 3 in every single way imaginable. While the story is still not as silly nor as intriguing as it should be, the unpredictable nature of the gameplay continues to leave it as one of the most enjoyable experiences out there. There is a certain magic to riding an elephant, a certain magic that no other game but Far Cry 4 can achieve.