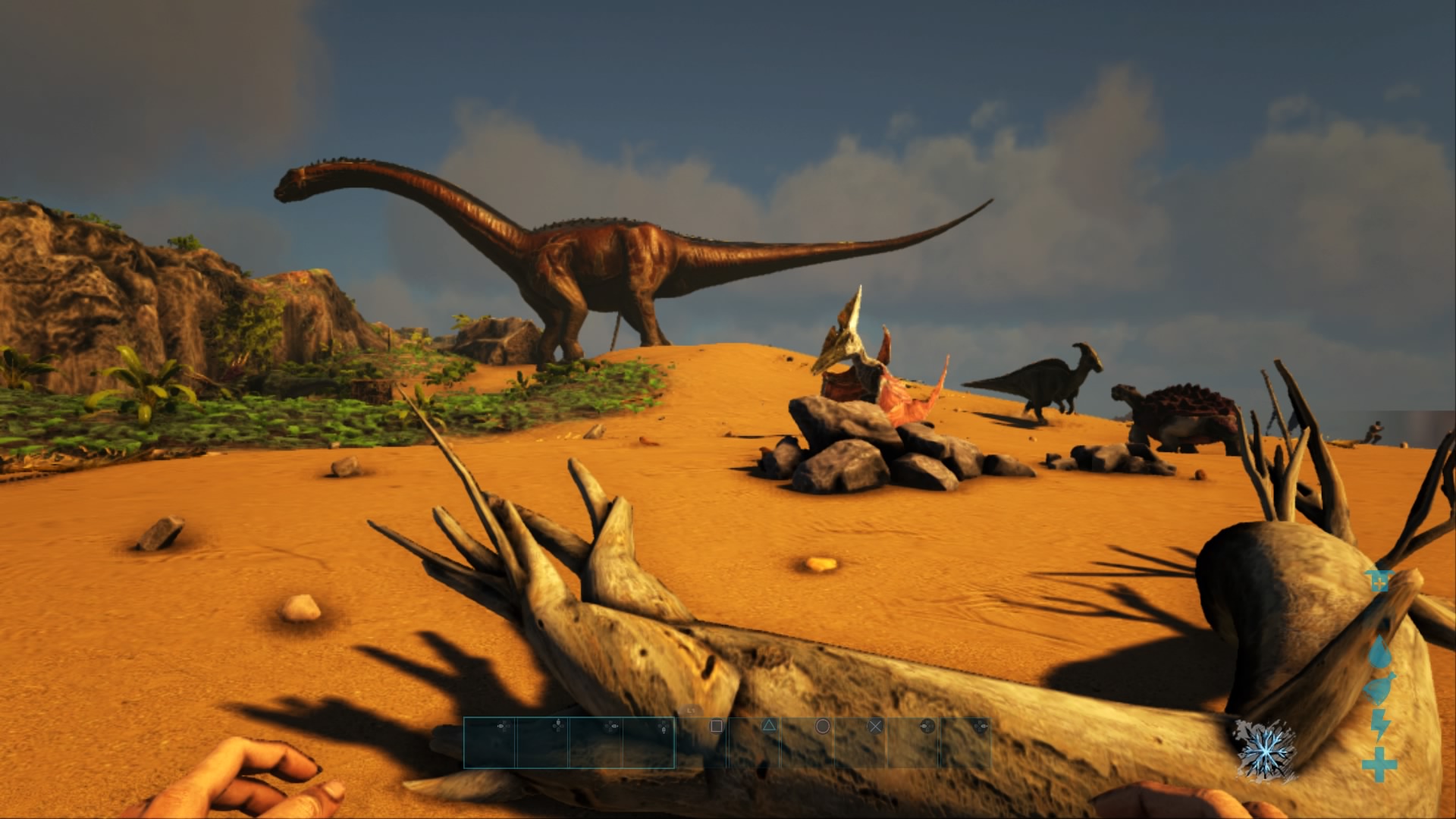 Studio Wildcard’s Ark: Survival Evolved has a bit of a history with players. It had been in early access since 2015, and it even received downloadable content in September of 2016 leading to an onslaught of negative comments by the community. In the end, the team pushed through this and eventually greenlit the game to be fully released. That’s right, Ark: Survival Evolved is finally out of early access, but does it feel like a complete game?

The goal of Ark is what it title suggests: survive. This won’t be easy as you wake up in a world inhabited by dinosaurs, prehistoric beasts, and even other players as you wield nothing but fists and a strange implant in your arm. You have to craft weapons to survive, and fast, because dinosaurs (and people, if you’re on a PvP server) are sure to try to kill you.

And kill me they did. I had an extremely rough start with Ark. The game doesn’t do a great job on explaining how to get started, leaving you to wander around the island (if that’s the area you chose) and inevitably die, which is frustrating at first, but something I’ve grown very used to. Fortunately, I had a few friends ready to help me start my adventure. I gathered berries for food to prevent myself from starving to death if I was in a pinch, punched trees to gather wood, and picked up stones all to craft starting equipment.

While you gather materials, you gain experience to level up. Leveling up allows you to increase stats such as health, stamina, hunger, oxygen (for holding your breath underwater) thirst, what you can carry, melee damage, crafting speed, movement speed, and fortitude (measures your resistance to weather, torpor, and disease). It also gives you engram points to unlock new items to craft. At level 1, you don’t start with anything useful, but fortunately you get your first levels fairly quickly. Once I had a few levels, plenty of materials, a pick axe, woodcutting axe and a spear, I was ready to go.

Equipped with a an axe, pickaxe, and poop, I was ready to take on the world.

And then I died. When I respawned, the only thing I kept was my level. If I wanted my items back, I’d have to find my body before it decomposes. That is, unless someone finds it before I do. There is a green light to show where my body (or, more likely, bodies) was, so it may have been too risky to go after it as it was on the other side of the spawn area. Instead, I decided to start up my arsenal from scratch.

All of my work gone, I start again with nothing but my level and fists.

And then I died again. Ark: Survival Evolved because a lengthy struggle of getting back to where I was, dying, and getting a little farther with new craftable weapons thanks to my level. But, when I’m playing alone, this felt more like a chore. It was repetitive, grindy based on how you need a higher level to craft anything useful, even shelter.

Plenty of these issues are solved with a little help from my friends. If you’re playing alone, Ark can be a drag, but this game is all about being in a tribe in a dinosaur-filled world. Once my friends logged on and created their characters, the tribe of “Cooked Dog” was established and we set off on a quest to build our new home. While my friend and I waited for our other friend to install the game, we explored the world and ran into a stranger. They were, like us, a low level, and were looking for allies. Our tribe number grew by one in that moment. The next player we found wasn’t so lucky.

There could even be treasure if we ever made it to one of these drop points.

While we were gathering materials at night, my friend was suddenly knocked out, when I turned around to see what he was screaming about, I saw a player in his inventory taking his belongings. I swung my pickaxe at him, but he was too quick. This guy was getting away with my friend’s belongings. That’s when our new friend demonstrated that she had the uncanny ability to haul ass. As she took off after the guy in a relentless blood lust of revenge, I guarded my friend’s body. Not too long after, she returned with all of the materials the other guy stole and set them at my friend’s feet. The tribe of Cooked Dog is a small, but loyal group.

Not too long after the thief incident (but long after my last death), we found the perfect spot to start building our base, or so we thought. Now, Ark: Survival Evolved has an interesting twist with its dinosaurs and beasts. If you can level up high enough, you can tame them and even ride them. Your character and familiar can also be transferred to another server, where you’re free to kill as many lower levels as you please.

Menacing, powerful, vicious. I was dead before he even got to me.

I learned this the hard way. In the distance, a Griffin was flying towards us. The Griffin, which never actually existed, is part of the Ragnarok expansion, a free expansion that came out alongside Ark leaving early access. On top of the Griffin was a player that decided to transfer himself and his mythical beast from the new Ragnarok DLC. This player also decided that he wanted to pick me, a weak level 8 up, and carry me away from my tribe. After plenty of futile stabbing with my spear, I died. Then my friend died. Then, presumably, our new friend died, but we never saw her again. The tribe of Cooked Dog seemed to have dissolved as quickly as it formed, but we still had hope.

The beauty of Ark, and all sandbox games, is the ability to create your own goal. For some, it’s taking out the alpha tribe, the tribe usually strong in numbers and technology, such as modern weapons like a pistol or a shotgun and able to set the rules of the land. For us, it’s taking out this damn Griffin tamer. I rendezvoused with my friend and we watched from afar as he took out new players with one strike on the beach. If we were to take him out, we’d need to be clever. We had to sneak up on him.

When I wasn’t dying to Griffins, I was dying to dinos, or long falls.

And then we died a lot. The Griffin tamer eventually left us alone, but we were unable to succeed in our goal of taking him down. With the threat gone, and our other friend’s game finally installed, we met up to finally find a place to start our base. As of now, we have a small base set up, complete with a bed to spawn to, but our game isn’t over yet.

Ark: Survival Evolved shines when you are playing with friends on a public server. Having other players to interact with, conspire with, or fight against adds to the overall experience of the game. However, it’s hard for me to enjoy this game alone. Unlike Minecraft, this sandbox is less single player friendly and more of a grind to level up and find materials. There’s also an issue with spawning where you can be placed in front of a dangerous creature. I died twice in a row to the same dinosaur. I technically didn’t lose anything but my patience.

One day, our base will look as nice as the one I broke into.

Does Ark: Survival Evolved truly feel like it’s out of early access? In some ways, yes, but it still has a ways to go before it feels completely fleshed out. Leveling up is a grind, there are too many dangerous dinosaurs in “easy” areas discouraging new players.

Ark: Survival Evolved was also bumped up when it left early access. While there are several maps you can play on already, it’s concerning that there is a $44.99 season pass released alongside the game. Since Scorched Earth, the first DLC pack released a year ago, was completed prior to the game’s full release, why couldn’t that have been included as well? At least Ragnarok is a free release.

If you have friends, Ark: Survival Evolved is a fun survival game, with options such as PvP or PvE servers to make every player happy. If you primarily play alone, however, this game will require a heavy set of grinding and repetition, turning off any players hoping to just get a taste of some dinosaur action.

Sean Anthony likes to combine two of his passions: gaming and writing. Gaming has been a huge part of his life ever since he played his first game as a child, Kirby's Adventure. He aspires to have his name attached to an article that makes the whole world go, "Huh, that's neat, I guess."
Related Articles: Ark: Survival Evolved
Share
Tweet
Share
Submit