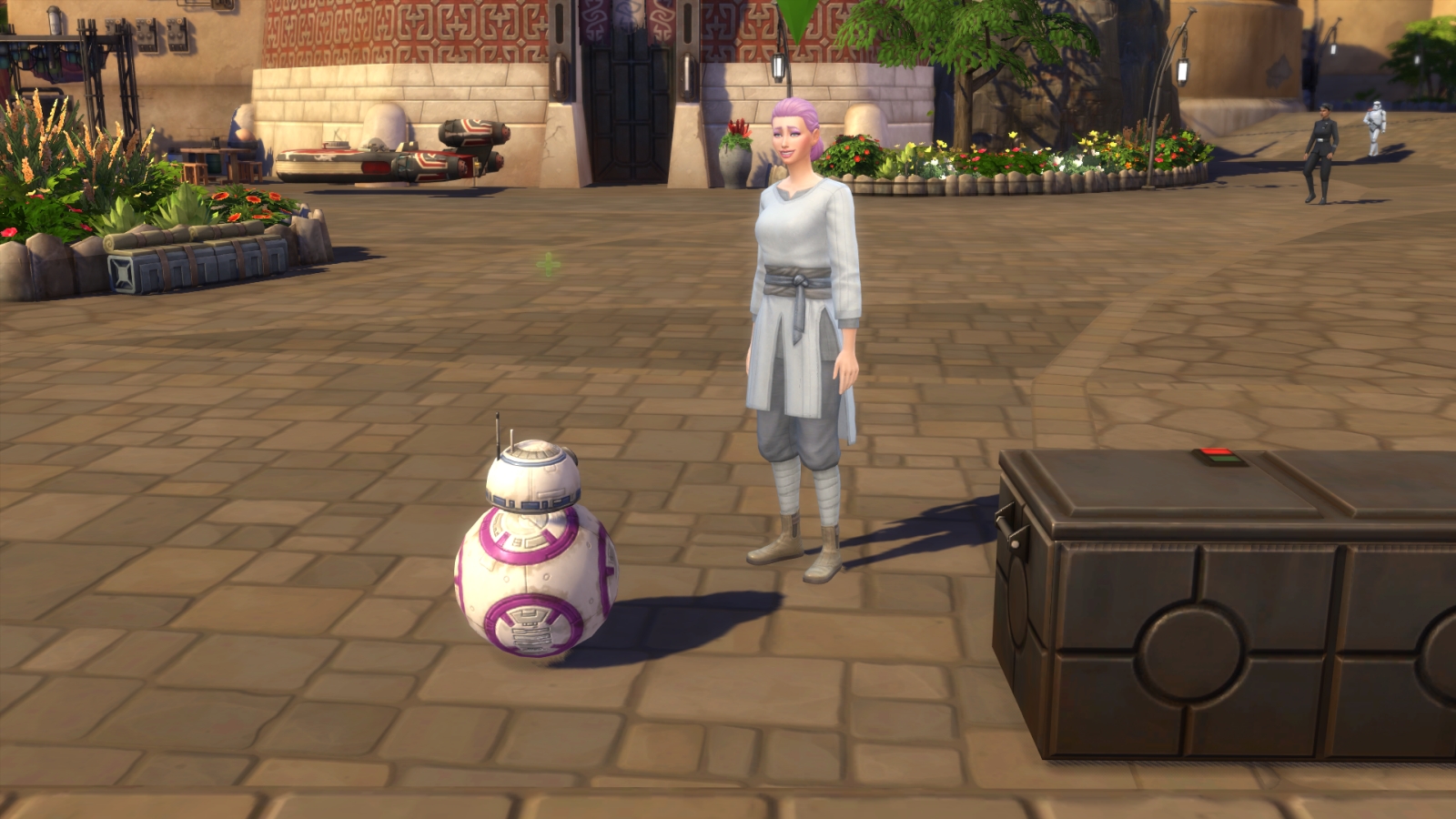 The Sims 4: Journey to Batuu has finally launched, and oh my gosh guys, I have been bursting at the seams to talk about it! I’ve had my hands on the game pack for early access the last few days while waiting for the embargo to lift and I have had an absolute blast! This game pack is exactly what The Sims 4 has so desperately needed.

First off this thoroughly scratched my “I need to go to Disney World” itch, as the map is almost an exact replica of the Star Wars Galaxy’s Edge at Disney World, complete with the Millenium Falcon. Everything from Oga’s Cantina to the blue milk stand across from Kylo Ren’s TIE echelon ship is here in game, and it’s absolutely glorious. 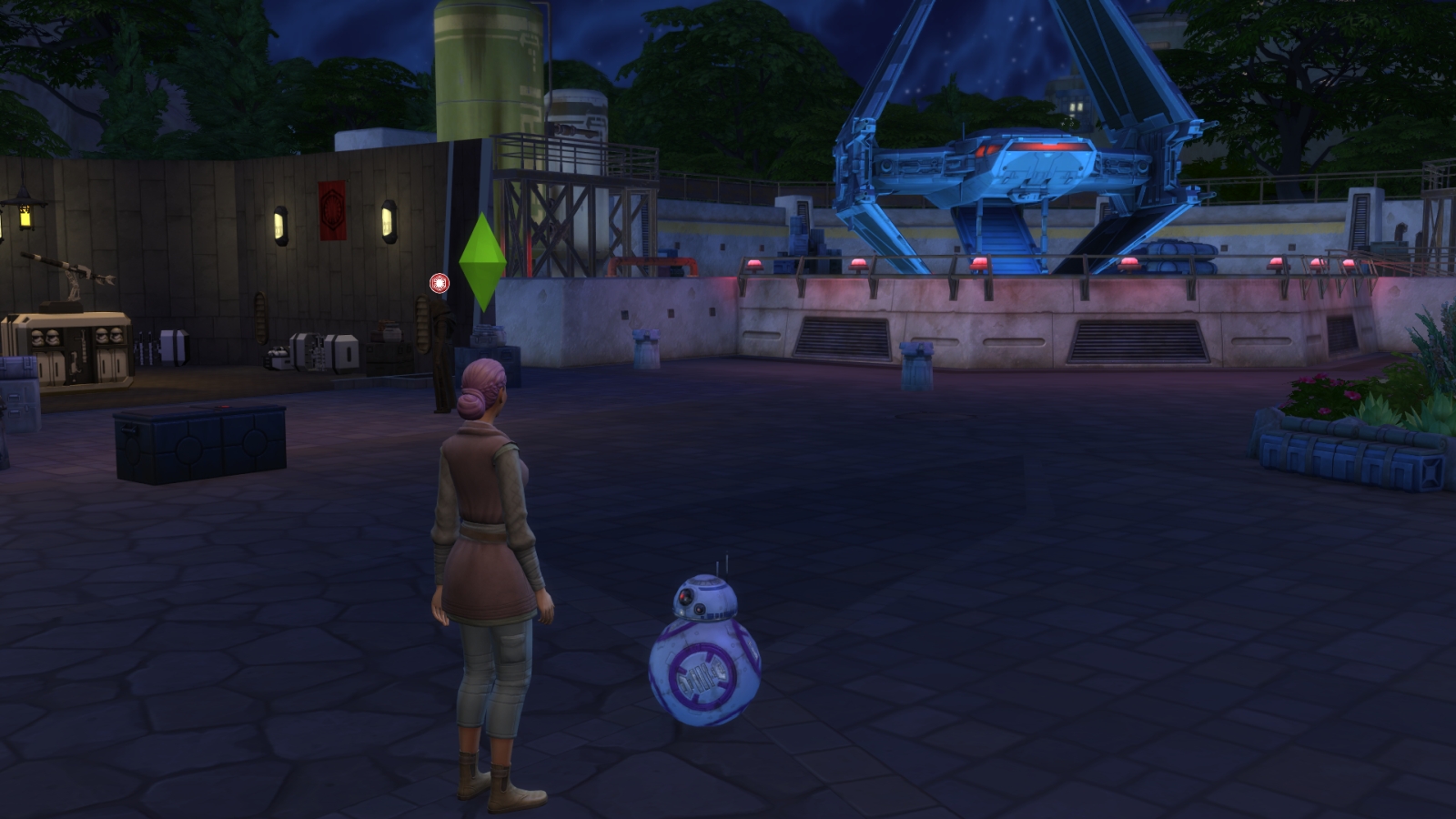 Checking out the TIE echelon, and also Kylo Ren’s backside.

I created a brand new Sim for Journey to Batuu, and took the Paragon of Hope aspiration, in which all of your objectives will be based in the new game pack. There are several really cool Star Wars themed outfits to choose from, and I think they did a fantastic job with it compared to some of the previous packs and expansions. Of course there is Rey’s famous three-bun hairdo, and a handful of other hairstyles. Once I was satisfied with my Sim, I wasted no time at all taking off for my vacation. Since it’s not super obvious, you’ll need to use your in-game phone or computer, and select “Travel Vacation”.

When you land in Batuu, there are three factions: Scoundrel, The First Order, and The Resistance, each in three separate sections of the map, unfortunately. After a quick change of attire to better suit your vacation, you’ll get a short series of quests to talk with folks about each faction before you choose which side you’d like to be on. Don’t worry, you can change this at any time. I chose The Resistance, but fully intend to explore The First Order (and perhaps Kylo Ren’s WooHoo game) later. 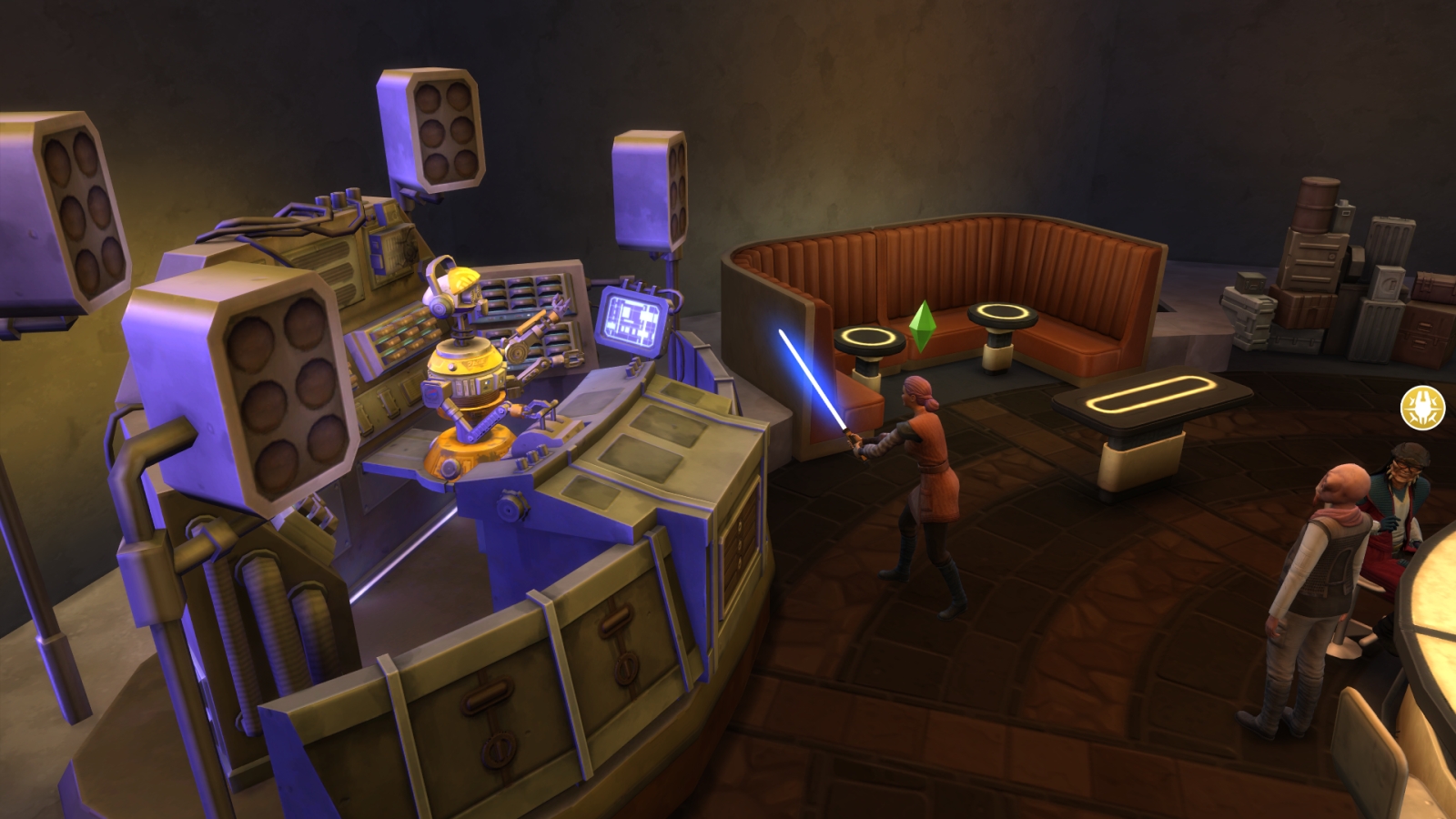 Practicing my lightsaber skills while hanging out with DJ R-3X in Oga’s Cantina!

I walked around and took in the sights before getting started. Oga’s Cantina looks just like real life, complete with DJ R-3X (the Droid from Star Tours, for those of you Disney freaks like me!) on the turntables. You can even experience some of the food from the parks in the Cantina and several other locations, such as Docking Bay 7. I did some shopping at Dok-Andars Den of Antiquities where I literally squealed out loud in delight when I saw porgs for sale, as I collect them in real life. There are also holocrons, kyber crystals, and plush Ewoks for sale, along with some other souvenirs that you can take back home with you to display in your house. You can also buy mini BB-8 toys at another shop. Savi’s Lightsaber Workshop will sell you kyber crystals and sabers, though you will also get these from your quests within Batuu.

At Oga’s Cantina, I met up with Hondo Ohnaka (Clone Wars!), the lead contact for the Scoundrel faction. To add to my immersion even more, I had to challenge him to a game of Sabacc. We sat down at a table right by DJ R-3X, and listened to his awesome jams, and my heart was content. You can challenge other Sims to play you in Sabacc, and earn some pretty decent cash while you’re at it. Speaking of money, you use a different currency on Batuu, which of course would be Imperial Credits. Your household funds are safe and sound back home, so you’ll have to earn yourself some Credits via quests, or Sabacc if you’re lucky. 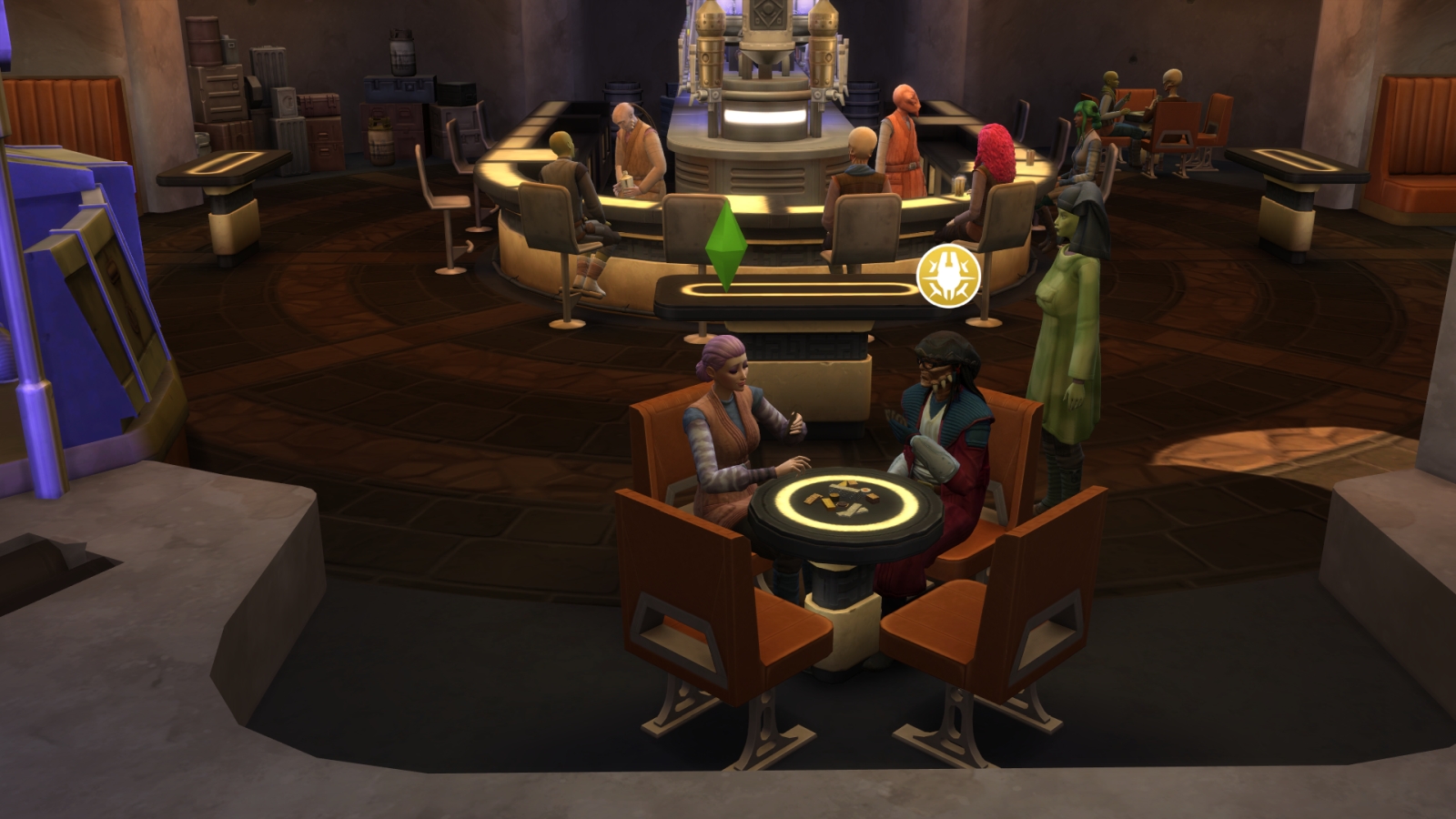 Playing some Sabacc with Hondo Ohnaka in Oga’s Cantina.

After fully checking out each section of Galaxy’s Edge…errrr I mean Batuu… I decided to take check in with The Resistance leader, Vi Moradi and start their quest line. Before too long, Rey (with an odd mix of a British/Simlish accent) makes an appearance and I got to practice my lightsaber skills with her. After being sent to spy on The First Order, my man Kylo Ren shows up. I can’t quite express in words how exciting this was for me! But even cooler than getting to play alongside these famous Star Wars characters, is the fact that you’ll soon build your own BB-8 unit that is fully interactive. He will help you out with your spying and quests, play music for you straight from DJ R-3X’s show, chat with you, and follow you around. I won’t spoil all the fun, but trust me you’ll want to build your own right away. You can do so by collecting scrap metal from scrap piles around the area, and once you have 10 you can build him in The Droid Depot in the First Order District.

You’ll go on a lengthy adventure for The Resistance, where you’ll have the chance to become good friends with Rey while leveling up your faction. Completing missions will earn you special rewards such as outfits, kyber crystals, and items for your home. Also, be sure to check the holotable in the basement of the Resistance camp, you can buy items from it once you’ve earned the appropriate rank. 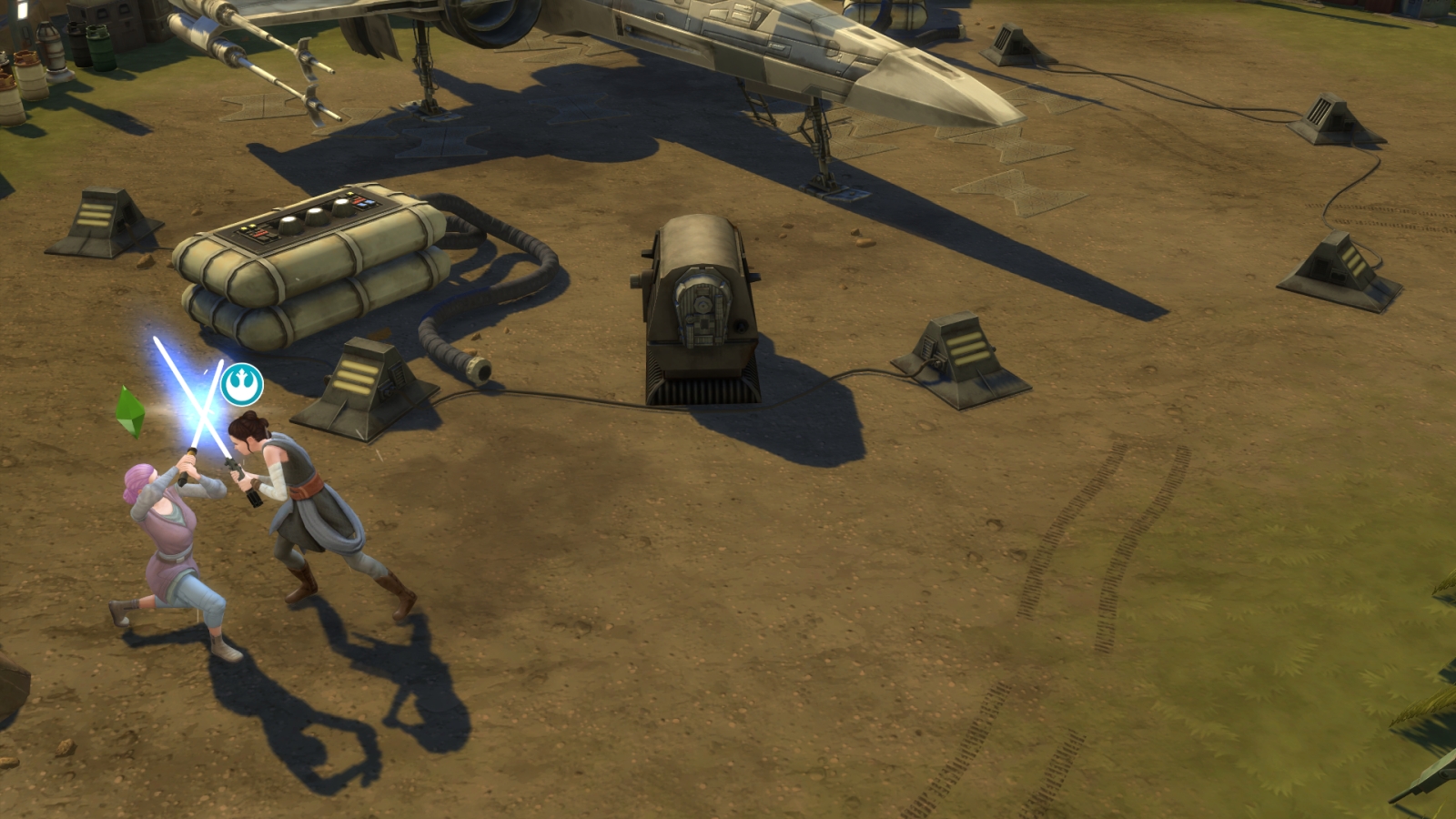 Hanging out with my bestie, Rey.

After completing The entire Resistance quest line, I’ve started on the Scoundrels quests. These are neutral and won’t affect your reputation with either of the other two factions, and you’ll make some really nice Credits while you work for Hondo. You also get to fly the Millenium Falcon, so that is a bonus.

My ONE complaint about Journey to Batuu is the loading screens. You have to Travel to each section of the map, and you do it frequently. It is a total pain to have to do this every few minutes as you quest. This is nothing new though, as it’s been the most hated thing for most players with The Sims 4 since launch. It messes with the feeling of immersion of this particular game pack more than any other in my opinion. You’ll also have to go back to The Black Spire Outpost for food and bathroom breaks, as there aren’t options in either of the other two sections of the map. 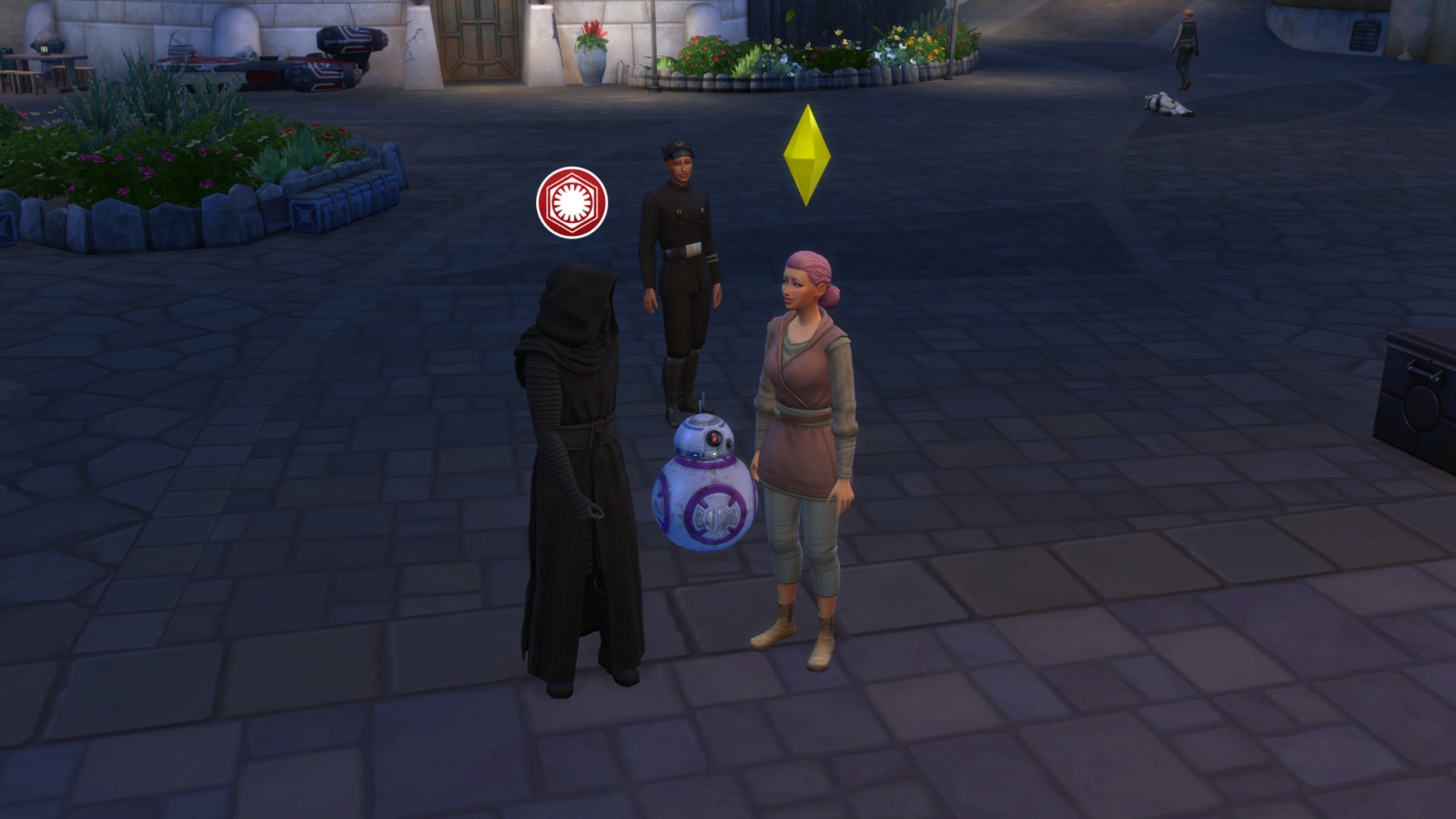 Just me and Kylo Ren getting to know each other.

Lastly, I am part of several The Sims 4 groups, and I am well aware of the outrage at this particular game pack. Things got so bad that the GM Lyndsay Pearson made a statement, which only seemed to make things worse. It seems pretty simple to me: if you like Star Wars, if you like Disney and had fun at Galaxy’s Edge, you will love Journey to Batuu. I was smiling literally the entire time playing through this game pack. Even if you don’t like Star Wars, you’ll still have fun with the quests, which are really in-depth and much needed in The Sims 4. It’s a SOLID pack with a lot of fun stuff to do. There is still a long list of unaddressed issues with The Sims 4, including missing content and features from its predecessors, but this is a chance to take a break from the usual Sims adventures and try something entirely new.

You can find out more information and buy The Sims 4: Journey to Batuu here: https://www.ea.com/games/the-sims/the-sims-4/packs/game-packs/the-sims-4-star-wars-journey-to-batuu

The Sims 4 Journey to Batuu Game Pack was a fantastic experience from start to finish. I can’t wait to see The First Order quests. This was exactly what the franchise needed. I’ve enjoyed most of the expansions, with Realm of Magic game pack being my favorite. Journey to Batuu blew that one out of the water and has zipped to the number one spot. As someone who loves Disney World, Star Wars, and The Sims, this was a welcome surprise. Who wouldn’t want to play with their favorite things in one of their favorite games?

Holly Hudspeth is a best-selling author living in Fort Worth, Texas. She has six published novels to date; The Skyy Huntington Series, which is an epic dark fantasy adventure, and One Small Detail, a stand-alone medieval fantasy. Holly also enjoys writing fan fiction based on her avatars from games such as EverQuest, Elder Scrolls Online, and World of Warcraft. Her first major purchase at the established age of nine was the NES, and she has been gaming ever since. She enjoys fantasy games, city builders, RPGs, MMOs, SMITE, and The Sims franchise. Most nights she is in SMITE with her husband and friends, or playing ESO. When she isn't gaming, she is probably either at Disney or planning her next trip there.
Related Articles: The Sims 4 Star Wars: Journey to Batuu
Share
Tweet
Share
Submit