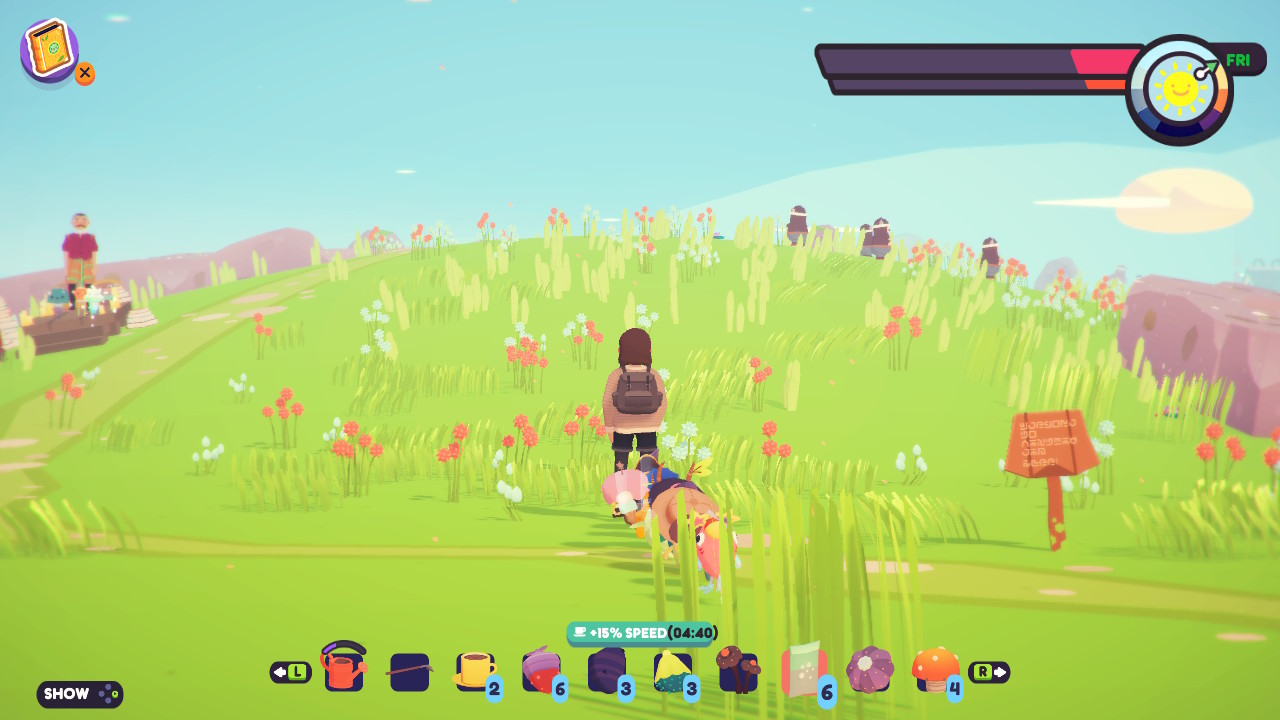 Your life has been a giant toot. The island you live on is no fun, and they’ve even banned Ooblets, the tiny, collectable creatures everyone on Oob is obsessed with. So you move to a town on the mainland: Badgetown. While idyllic on the surface, strange things are afoot in Badgetown, and I’m not talking about Taffy. Mayor Tinstle has noticed an outbreak of mysterious cans, the town’s been disconnected from Oobnet, and the Ooblet High Counsel isn’t responding to any messages. In exchange for a free house and farm, you pinky swear to help her improve the town and uncover what’s going on.

Ooblets entered early access on PC two years ago, and as of last week it’s finally entered its 1.0 release! In my preview, I thought the game was charming and incredibly addictive, but of course didn’t have much to do since it wasn’t finished yet. I’m happy to say the game is even more charming and addictive than before, though it does still have some issues.

You begin Ooblets customizing your character including things like hair, skin color, and clothing. You may notice gender is missing from that list, which is pretty cool for multiple reasons like inclusivity and being able to wear whatever clothes you want. Once you arrive in town and speak to a few notable residents, you choose which Ooblet club to join and receive your first Ooblet. This isn’t too big of a deal, as later on you can get all of the Ooblets and your club doesn’t actually matter, but you’ll be sticking by your first partner for quite a while. Just like before, I chose Sidekey – a cute little robot pal.

Along with helping perform farming tasks, Ooblets love dance battles which just so happens to be the form in which most conflicts in Oob are settled. Dance battles are turn based, and your goal in each is to fill your meter before your opponent fills theirs by getting jiggy with it. At the start of your turn, you’ll receive a new hand of cards from your deck. While some cards are common and available in your deck no matter what, each Ooblet provides special, unique moves for you to use if you draw them. For example, Sidekey comes with a card that allows the next move you play to happen twice in a row. You also start each turn with a certain amount of Beats, which is a resource you spend to play cards and, just like your hand, is refreshed each turn. You play cards to earn points, stun opponents, earn Hype, and more in these fun, cute, and easy to understand battles. My explanation may not be the best here, but rest assured you’ll instantly grasp it when you play the game. 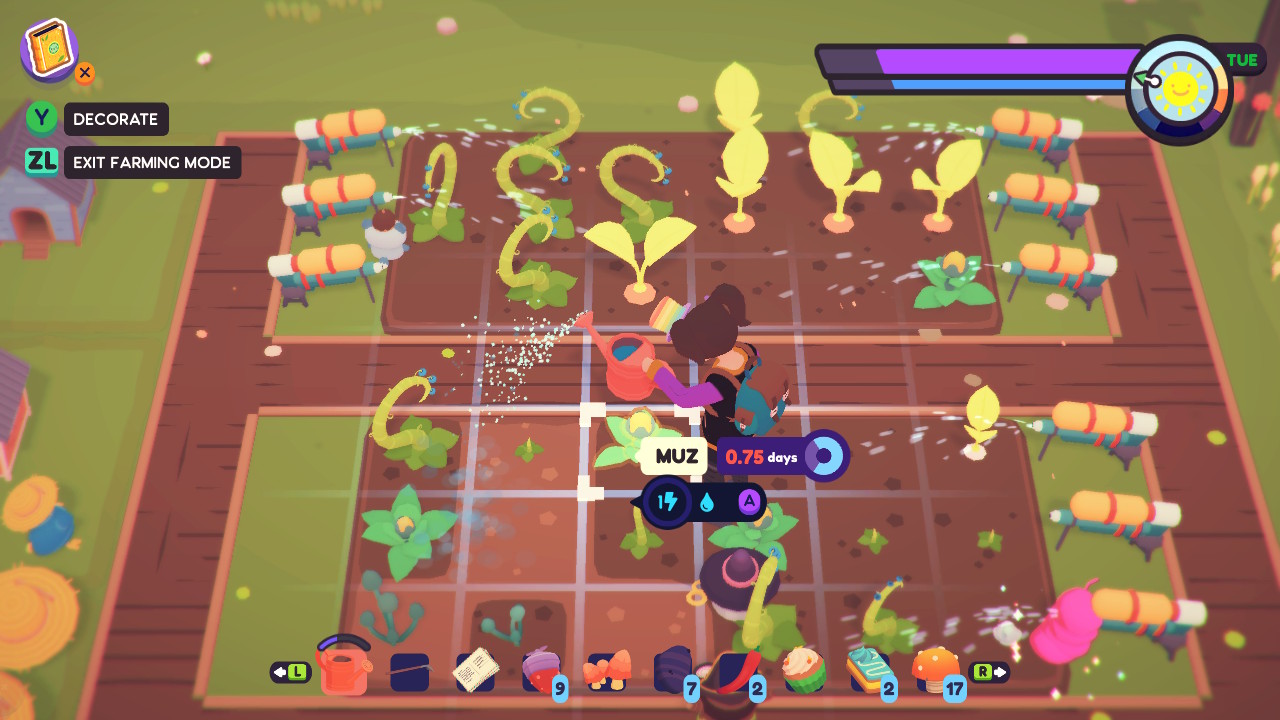 Pretty much all of the battle customization comes from building a team, either through growing new Ooblets or leveling up your Follow Babies to earn new unique moves. While you can have up to 8 Follow Babies at once (much more at home and in the Wildlands), you’ll be limited in battle by the number of Ooblets on the opposing team. You can get Ooblet seeds through, you guessed it, winning a dance battle against wild Ooblets. In order to challenge them, however, you need to provide an entry fee of whatever items they ask for. A wild Ooblet may want anything from some foragable mushrooms around town to a full course meal of rare dishes. This unfortunately makes the early game very slow going, as you need more Ooblets to battle stronger Ooblets and get new resources but you can’t get more Ooblets without getting more resources. Eventually you are able to break the cycle through growing a lot of Clothlets to finish Tinstle Tasks that unlock more mechanics like friendship, wishes, and a larger selection of seeds, so make that your first priority. It may seem like a common material found around town, but it’s actually very rare. For each new Ooblet you grow, including those of different colors and rarities, you can take them to a scanner for a bonus of some Gummies (the game’s currency) and to 3D print a statue of them for the town hall’s equivalent of a Pokedex.

Farming itself is very simple in a good way. You till some soil on your field, plant a seed, water it, then wait for the results. You can add some fertilizer to speed up growth or have a plant retain water longer, but the basics are the same. You’ll also have to make sure your photosynthesis babies aren’t being smothered by weeds, rocks, and sticks which you can destroy for more resources like Nurnies and Planklets. To aid you in these tasks and more, you can build sprinklers to water a certain amount of squares in front of or around them, construct Ooblet coops to help with weeding or even planting and watering, and even task some Ooblets with turning certain crops into other, special materials. It is a bit difficult to figure out how to get some materials for quests or battles, especially given the ridiculous naming schemes, but you will eventually get your bearings and things that felt out of reach before will slowly come into focus. By the endgame, I had more seeds than I knew what to do with and a ton of cash to buy new clothes or customize my home, but I will say even then I still wasn’t sure how to learn certain recipes for some Ooblets I was missing. 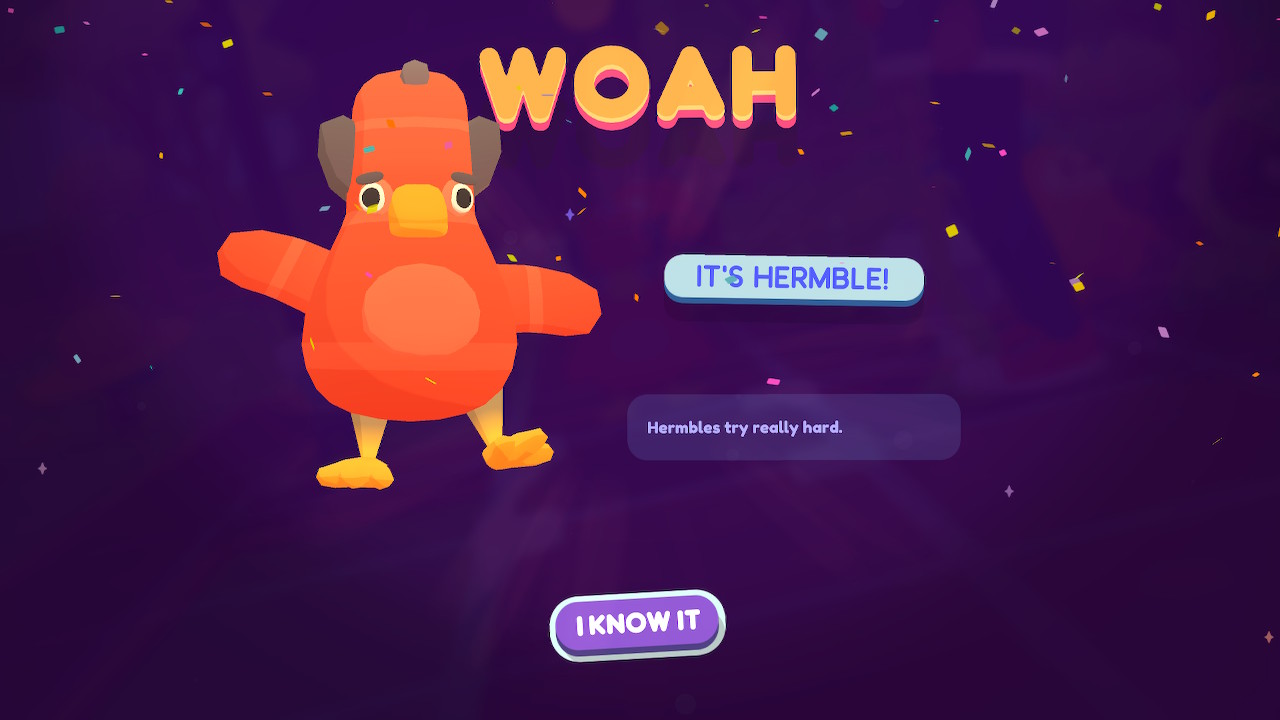 While living off the land is a lot of fun here, it does come with a few annoyances. Unlike other farming games like Stardew Valley, Rune Factory, or Story of Seasons, your crops don’t stay watered the whole day once you take care of them in the morning. Instead you’ll have to check on them periodically and rewater them if needed. This isn’t the biggest deal, but it’s something I had to get used to. The biggest issue I have actually comes with another problem common to the platform I chose to review the game on: the Switch. As you progress through the game, you’ll unlock new areas to visit with a hot air balloon. Most of these don’t have a whole lot to do in them and mostly serve as dungeons, but all of them have new seeds to buy. So rather than simply visit the seed shop right next to your house, if you want to grow these plants you need to leave town and sit through just enough loading to become frustrating on the way there and back. I imagine this is a non-issue on a PC with an SSD, but the game feels so suited to Switch and it’s worth noting here. Keep in mind that this is an indie game developed by a small team, however.

The Switch version also comes with a few minor performance hiccups. As far as I can tell, the framerate is unlocked so while outdoors you’ll see around 30 frames per second, indoors you can jump up to 60. The only time I felt the framerate actually impact my experience was at the very end of the game, which is understandable considering how many objects are on screen. I had expected the game to have a cap of 30 given how good it looks, but those localized jumps to 60 just add the cherry on top. Ooblets uses a simple yet very colorful art style that works incredibly well with the silly and oftentimes hilariously obtuse humor. If you’re into that somewhat nihilistic, “doing the best you can with very little” millennial style humor you’ll be grinning ear to ear almost the entire time. There are several characters around town to become Frenz with, and though this isn’t as in depth as other aforementioned farming games you’ll get stickers, items, and even new quests from them as you fill their friend meters. My personal favorites were Arah the gothic witch, the mayor Tinstle, the conspiracy theorist Churles, the scientist Rugnolia, and of course the goofball that is Taffy. 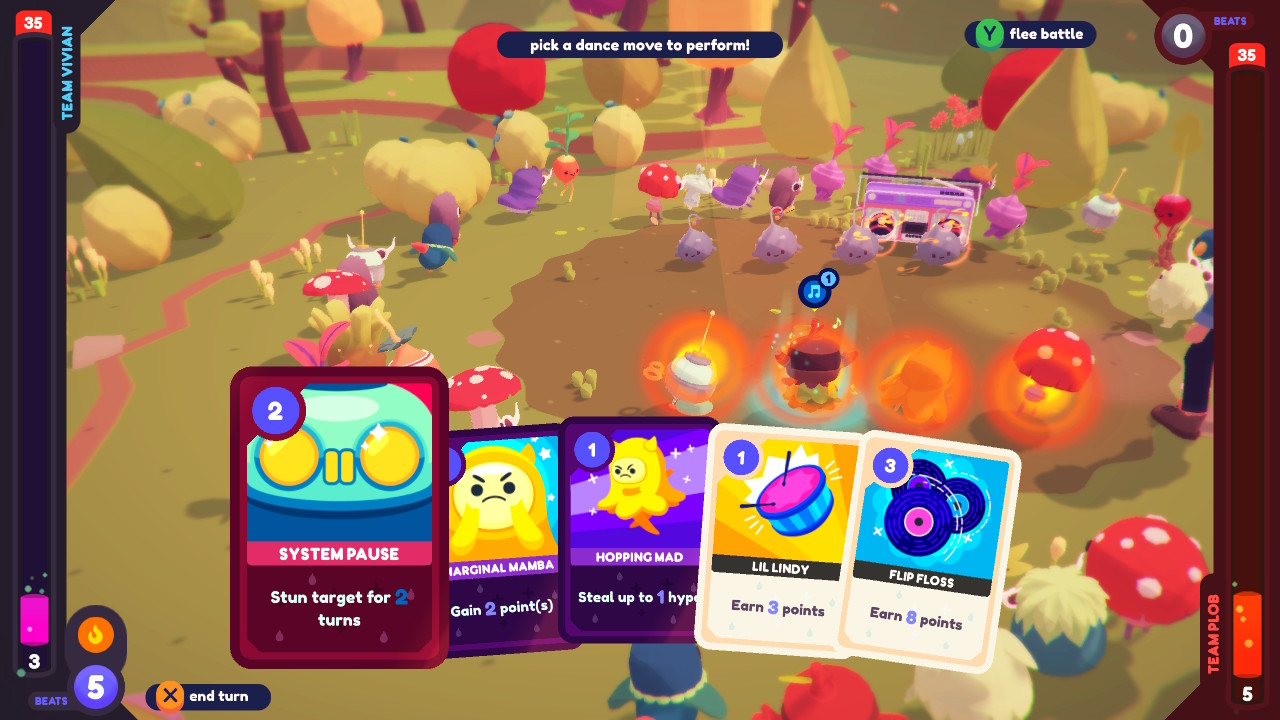 While I really like the townies, there are a ton of other NPCs that you can’t become friends with for whatever reason. Having more friends outside of town would have given the mostly one note areas you visit more of a purpose outside of buying a few seeds. Places like Port Forward and the Pantsbear Hills are gorgeous and fun to explore for the first time, but I don’t really see myself returning there other than to get seeds for some exclusive Ooblets.

I did find that one of the final areas, Tippy Top, became quite a slog to get through. So far, it’s pretty standard for the “dungeons” to have you walk through a small portion, then be stopped by an NPC either wanting a few items or to be schooled in a dance battle. Up to this point, this was fairly annoying but not awful as most NPCs just wanted to dance battle. Tippy Top is just the worst parts of this design all in one, because almost every roadblock requires rare items or a large amount of money to pass on top of being a giant mountain that takes forever to walk up and down. On top of being annoying, it just feels like the game is wasting my time especially since my character is also incredibly annoyed by these seemingly pointless roadblocks. Thankfully there’s one great dungeon after this to finish the game, but if I never see Tippy Top again it’ll be too soon.

It’s still a bit rough around the edges, but Ooblets is a quirky combination of monster collecting RPG and farming sim. The humor and characters are incredibly charming, and the core gameplay loop is a ton of fun. For every annoying dungeon, there’s some cute Ooblets to battle and collect just around the corner. What Ooblets lacks in polish, it makes up for in charm.

David is the kind of person to wear his heart on his sleeve. He can find positives in anything, like this is a person who loved Star Fox Zero to death. You’ll see him playing all kinds of games: AAAs, Indies, game jam games, games of all genres, and writing about them! Here. On this website. When not writing or playing games, you can find David making music, games, or enjoying a good book. David’s favorite games include NieR: Automata, Mother 3, and Gravity Rush.
Related Articles: Indies, Ooblets
Share
Tweet
Share
Submit