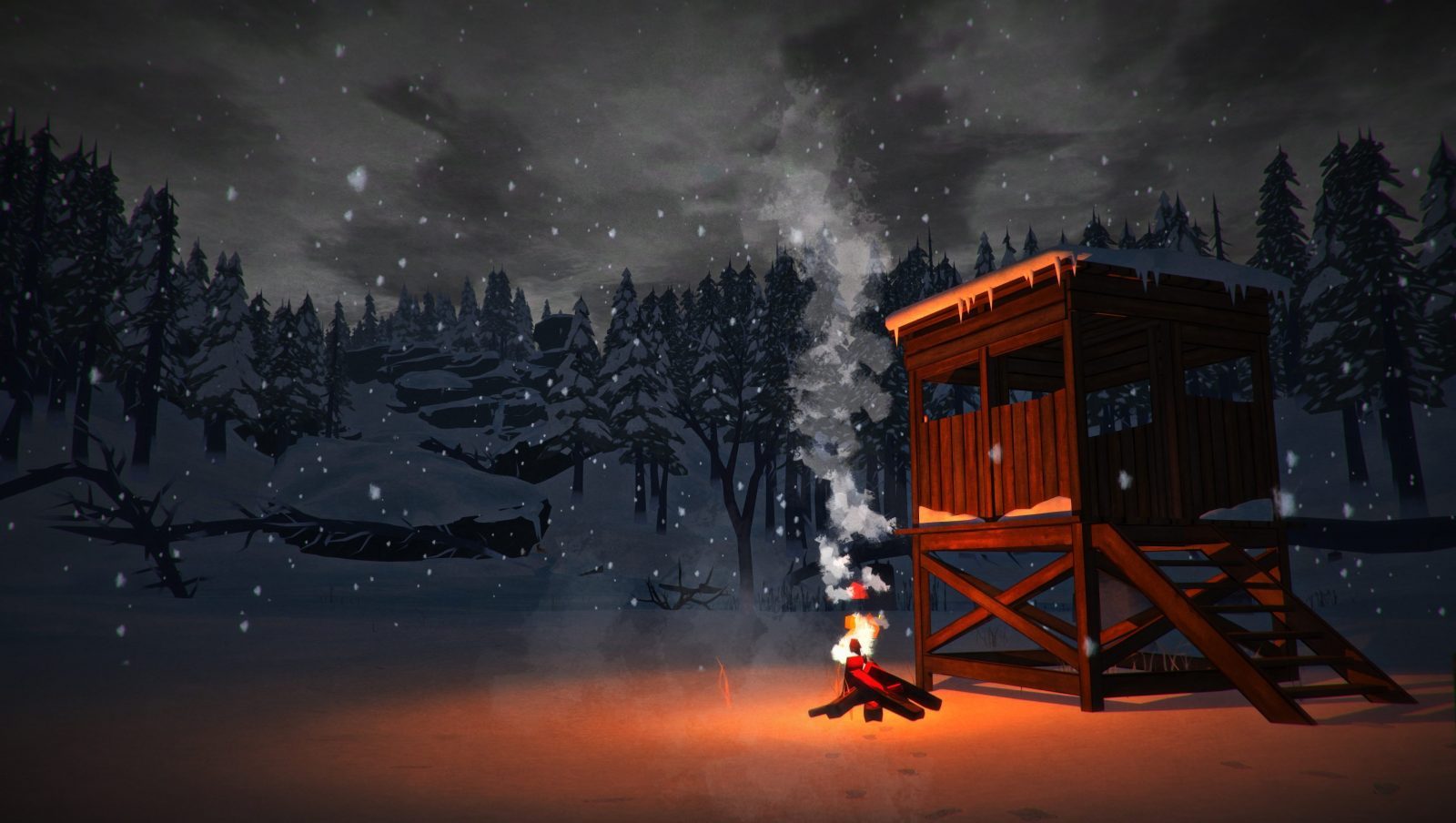 The world can be a hostile environment. With mother nature’s powers unrivaled, it’s easy to succumb to the elements. In The Long Dark, you are fighting for survival, not only against mother nature, but against eerie and unnatural events. The Long Dark is a first-person survival game spread out over five episodic expansions. With episode three recently releasing, it’s a good time to take another look at this expansive series and acknowledge many of its improvements. The Long Dark takes a unique approach to the survival genre. With two game modes to choose from: Wintermute, which lets players experience the story along with the trials and tribulations of surviving, and Survival Mode, which is an open sandbox for players to build their world in, there’s more than enough to keep you busy. With the episodic expansions strictly focusing on the story, this is what I want to focus on, starting with episode one.

What makes The Long Dark so different from other survival games is that it blends a strong narrative story with the deep mechanics of a survival game. The game begins with you taking control of Will Mackenzie, a transport specialist in the Canadian wilderness. As you know, a day on the job is never a day on the job. He is blindsided by the appearance of his ex, Dr. Astrid Greenwood, when she beckons him to help her reach an isolated town where someone is sick with an unknown disease. The voice acting and character development is top notch, setting the tone and mood of the game. You can feel the tension between Will and Astrid from the moment she sets foot in the room, especially when she reveals a steel case that she’s unwilling to reveal the contents of. This type of character dynamic is carried throughout the game, so expect a deep and weaving story as you play. Agreeing to help her, the game takes this moment to make you familiar with the survival and item collection aspects of the game. 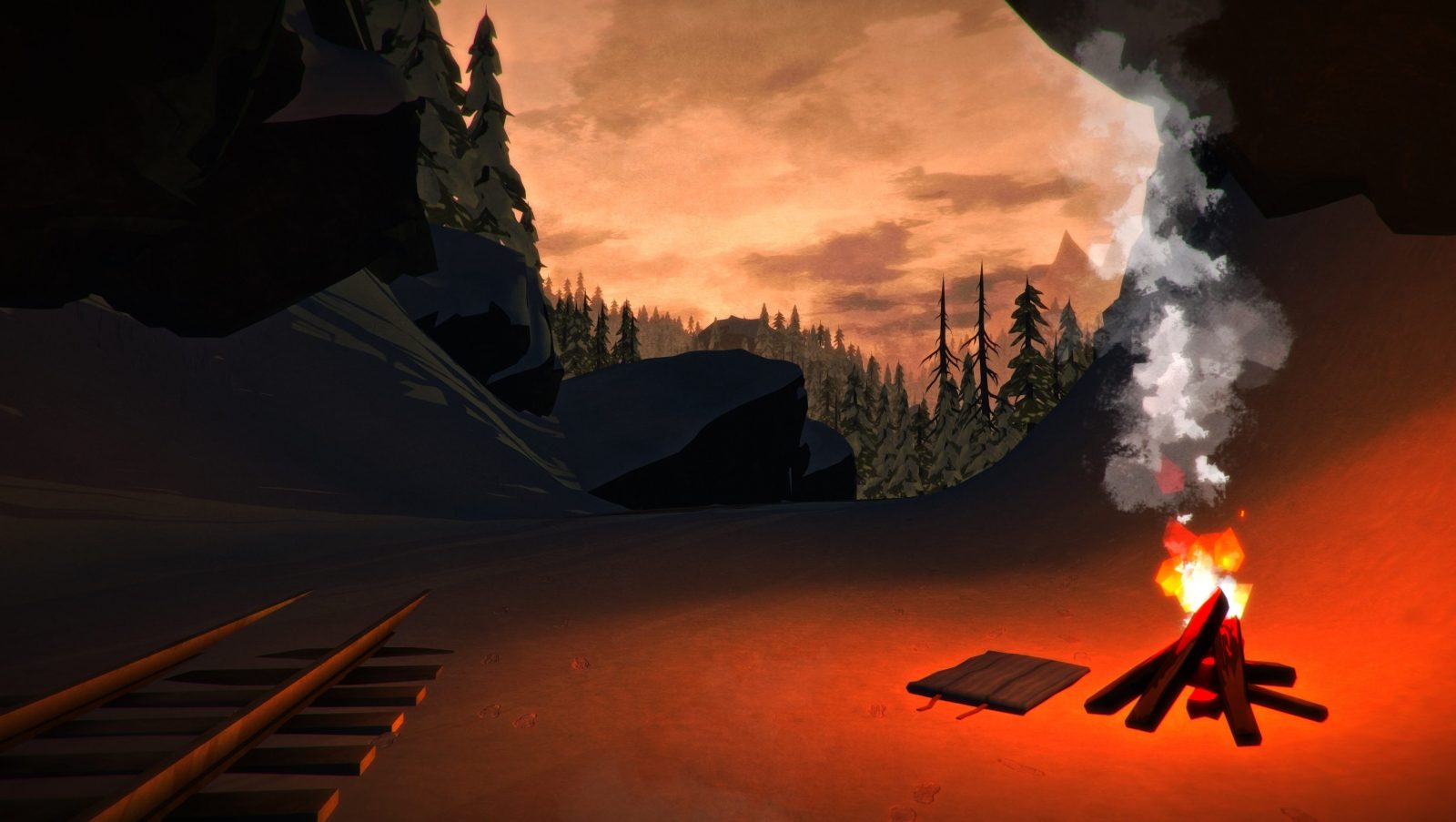 With the first scene taking place in Will’s office, you are introduced to your survival meters you must monitor. With your temperature, fluid intake, caloric intake, and fatigue all being a factor to your survival, it’s pertinent to keep an eye on those meters. Get too cold, hypothermia sets it, too hot, you’ll burn yourself. The same goes with carrying items. Carry too much and the wolves won’t have to chase you down. Choose not to carry the right equipment to survive the harsh winter and you’ll be a frozen dinner. With Astrid waiting for you in your plane, you are forced to choose what survival items to take in the event something goes bad, which in this case there’s a one-hundred percent chance of this happening. Because the plane can only carry so much weight, you must be selective as to what items you want to bring. After loading the plane, you set off to this mysterious town. Just as the tension mounts between the two, a strange atmospheric anomaly knocks out the plane’s electronics and sends you and the good doctor plummeting into a mountain, and this is where hell on Earth begins.

Waking up a broken, battered man, and separated from Astrid, the game takes this time to introduce you to crafting for survival. I stood under the burning plane that had broken into pieces as it plunged into the uncharted mountains of Canada. Sustaining major injuries, I had to gather items that had been thrown from the plane. Gathering pieces of wood, paper scraps, tin cups, medicines, and clothing are all part of crafting and surviving. Finding a dry spot in a cave, I started a fire using pieces of wood from a tree, a newspaper, and matches. Waiting for the temperature meter to rise takes a while because your clothes are wet and your extremities are damn near frozen. When you’re close to hypothermia and your clothes are wet, it takes longer for your body to heat up again, and with fires having a finite life expectancy, you’ll need plenty of flammable material to burn. Once warm enough, I made my way across the broken wing to another part of the mountain, and not too long after, I began dying of thirst and hunger. It’s key to remember to balance your survival meters. Running, hunting, and doing anything that exerts yourself burns calories. 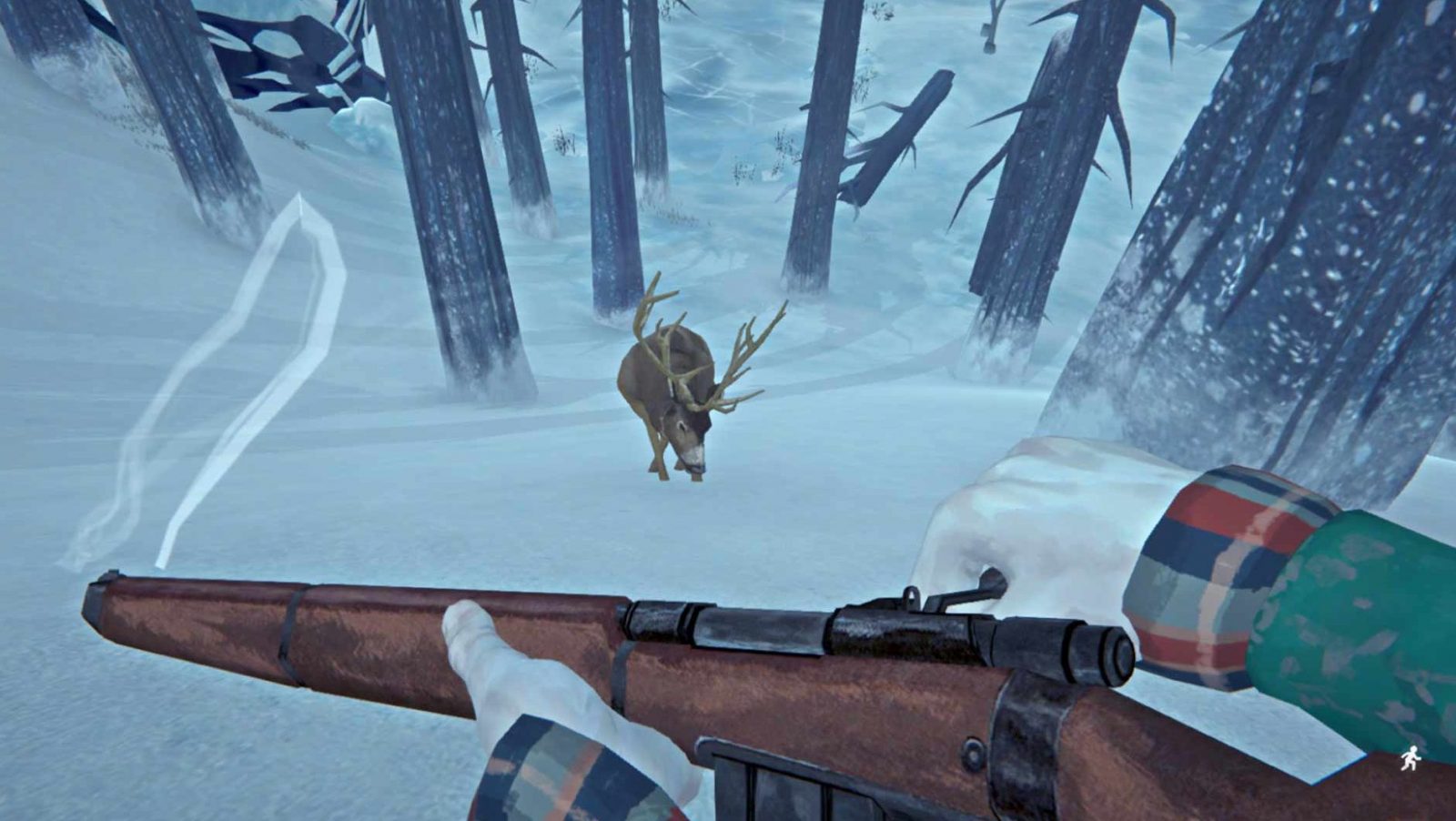 Have gun will travel

With me wondering how and where to find items to feed my needs, my brain went into survival mode, and that’s exactly what the game wants. After building another fire, I used a tin cup I packed from the office, filled it with snow, and melted it next to the fire for water. I will admit, it takes too long for the snow to melt and boil to become drinkable. The entire process takes almost forty in-game minutes. The same is with food: finding a carcass takes too long to skin and take food from. Often, your fire will burn out forcing you to restart it. But the developers at Hinterland studios went to great depths to make items in the world more useful than you’d think. After starting a fire, you can use that site to melt snow for water and cook your food by setting it on a hot rock – caveman style. But be careful, consuming raw food or non-potable water risks disease. It’s like playing Oregon Trail in 2019.

After getting my bearings and my survival meters within healthy parameters, I pressed on where I was confronted by a wolf. Wolves in this game are conniving creatures. Often hunting in packs, they survey the lands with a wide cone of view, so staying low and out of site is key, especially if you don’t have fire or something to scare them off. I opted to use a flare gun I had retrieved from the plane to scare it off and scavenge the dead deer it was feasting on. This is where I ran into trouble. Because it takes so much time to scavenge a deer, my body temp had dropped, clothes got wet, and I was hunger set in. And when all these things occur at the same time, it’s hard to get back on track. After starting another fire, cooking the deer meat, and making potable water, I used a stick to create a torch so I could try and track down Astrid. Unfortunately, torches don’t give off much heat, so finding dry clothes and warm areas are always important.

After making my way through a mountain pass, I stumbled upon a town that was desolate and deserted. Giving off that ’30 Days of Night’ feeling. But there was one house where a chimney was billowing smoke. Not to give too much away, but this is where the story kicks into high gear and you begin to understand that the anomaly that knocked out your electronics has been around for a while, and the people in town are all dead, or alive and will threaten your mission in finding Dr. Astrid. Nothing like an old, blind lady with a shotgun pressed to your temple to get your blood flowing. 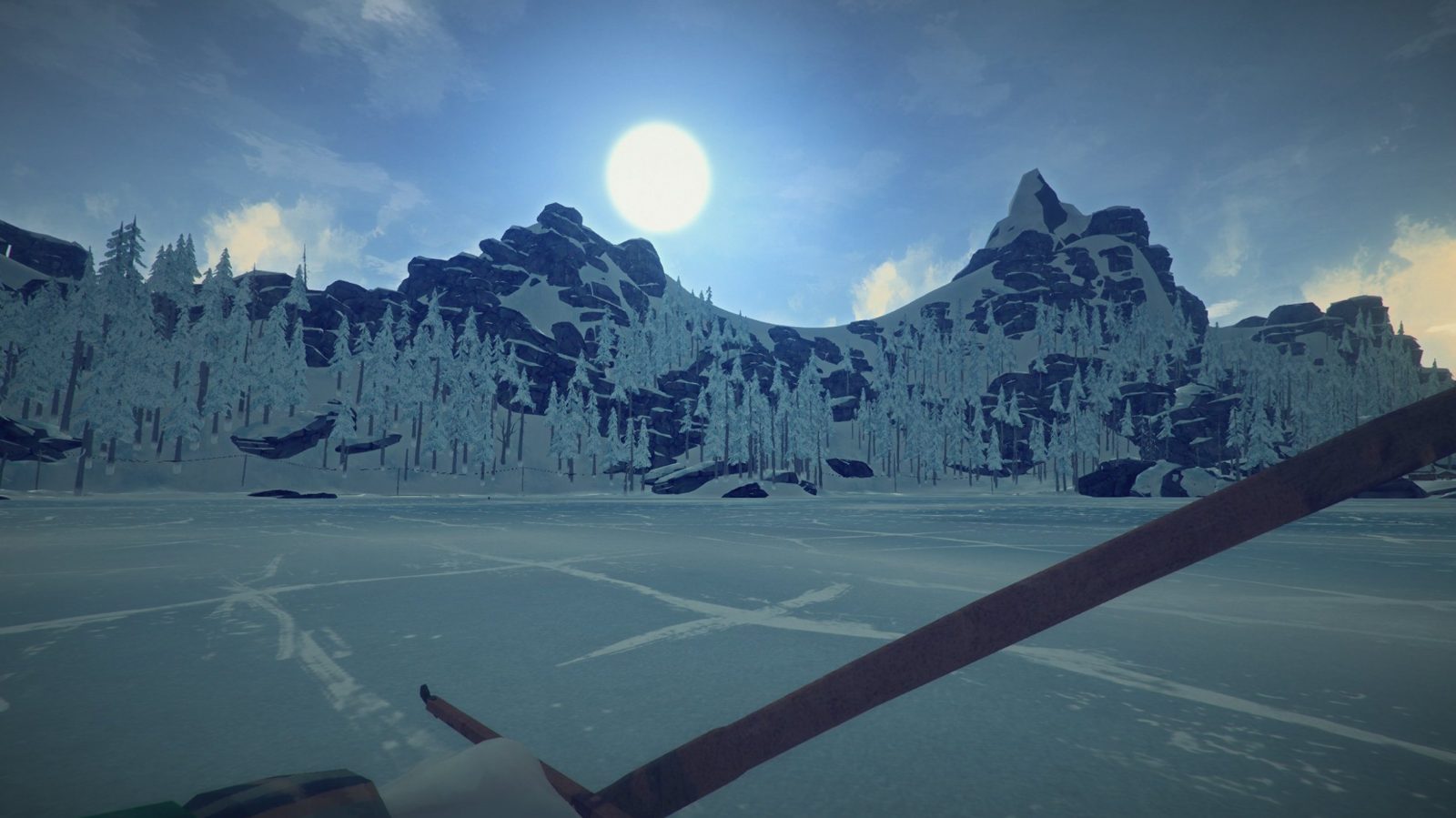 Shoot for the stars

Fast forward to episode three: You play as Astrid, and she’s alive, but not well. Saved by a mysterious woman, she is injured and kept against her will, sort of. Think ‘Misery’ with James Caan and Kathy Bates. The eeriness of the characters and the surrounding world continue to set the mood in a world that appears dead. The game’s pacing remains spot on as it never lets you in on what’s next. While the mysterious woman is out gathering food, I searched the house for anything and everything I could use to escape. Fueled by trying to reach Will and retrieve that steel case, I tried to find a way out the house when the phone rang. It was the mysterious woman. While out hunting, she was surrounded by a pack of wolves that cornered her in her barn. This is where the game finally makes you feel like you’ve got the upper hand. You find a gun rack in the woman’s basement and play hero, only to find out that the mysterious woman killed one of the wolves and scared others away. Why did she call you if she had a weapon? Why lock you in the house if she’s hiding a horrendous secret? These are the types of events and moments you’ll be faced with as you discover why the wolves are aren’t afraid of humans and why the people of the towns are dead. Episode three builds upon story of the previous episodes and expands upon the world we play in.

The Long Dark is a blend of visual artisanship and skillful storytelling. With its water brush, hand drawn art-style, the world comes to life when watching the starry skies or watching the snow-capped hills in the background. All isn’t perfect with this gem; because of the art-style, black levels are too black and items to collect blend in, leaving areas without light difficult to search. Also, by no means is this game a technical masterpiece. The game could use an increase in anti-aliasing, because the edges of objects appear to dance and shimmer, making objects appear as if they are moving. But in a sea of overly developed visual games and games that launch broken, it’s these oversights that give this game personality. As a fan of the survival genre and games with strong narratives, this ranks up there with the best.

The Long Dark is an amazing spectacle of narrative brilliance and survival. The twists and unexpected turns of the story are complemented by the survival mechanics that are challenging and thought provoking. The Survival Mode gives players a sandbox to play in, and allows them to play and survive how they see fit. With the story being released in episodic expansions, there's always a reason to come back and play.

T.K. is a freelance writer, narrative designer, and author. Writing and developing narratives and giving voices to digital world and characters is his passion. As a game writer, QA game analyst, and editor for Gaming Trend, he enjoys being a part of the gaming industry.
Related Articles: Indies, The Long Dark
Share
Tweet
Share
Submit