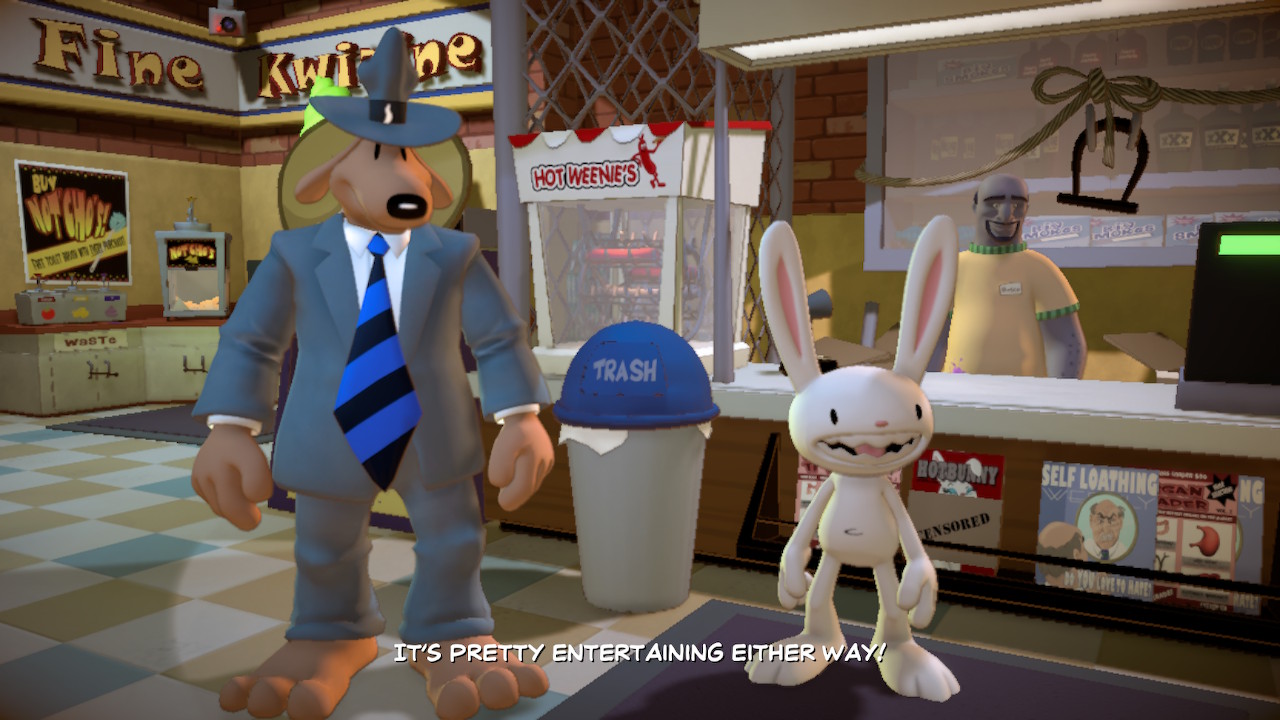 Great steamed barnacles at a clambake off the north coast of nova scotia, the Freelance Police are back! Sam & Max’s first season, originally developed by Telltale Games, is available on both PC and Nintendo Switch. While you can read a review of the former right here, how does the Save the World remaster perform on a portable console?

The main improvements of this remaster remain largely intact from the PC version, namely the improved lighting, animations, widescreen, uncompressed audio, and 5 new tracks. As far as I can tell from our footage, the only concessions made to fit the game on Switch are the resolution, lack of anti-aliasing, and framerate. Sam and Max targets 720p at 60 frames per second in portable mode and 1080p 60 in docked mode, and while I never noticed it drop below that resolution the frame rate rarely, if ever, reaches 60. It’s not a problem for adventure games, but on the occasion it does reach that target in areas like Reality 2.0 it makes the issue stand out. An option to change the frame rate to 30, simply for a more consistent experience, would have been appreciated.

As with all Switch titles, one of the big draws with this version is the portability and it’s essentially identical to docked mode. Things like shadows looked a bit more pixelated and the Switch’s speakers aren’t the highest quality (break out some headphones for this fantastic jazz soundtrack), but otherwise it’s basically the same. However, while in portable mode you gain access to touch controls, a welcome addition for adventure games especially. Unfortunately, they don’t work very well as there’s no way to tap and hold to move Sam around the larger maps nor can you get him to run. With how cluttered the environments are it’s also difficult to tell what you’re trying to interact with on a tiny screen blocked partially by your fingers, so I mostly stuck with standard controls throughout all six episodes. You use the left stick to move Sam, the right stick to scroll through interactables, A or ZR to select, X to open the inventory, L to highlight all interactables on screen (which is incredibly useful), and ZL to run. It’s a serviceable control scheme, though trying to select a specific object with the stick can be a bit wonky at times. There is no way to change the controls either, so you’d better get used to it.

Sam & Max Save the World

While Sam & Max Save the World remastered makes a few concessions for its console release and the touch screen support is lacking, it’s still a gorgeous and hilarious game that is well worth playing in any form.

David is the kind of person to wear his heart on his sleeve. He can find positives in anything, like this is a person who loved Star Fox Zero to death. You’ll see him playing all kinds of games: AAAs, Indies, game jam games, games of all genres, and writing about them! Here. On this website. When not writing or playing games, you can find David making music, games, or enjoying a good book. David’s favorite games include NieR: Automata, Mother 3, and Gravity Rush.
Related Articles: Indies, Sam & Max Save the World
Share
Tweet
Share
Submit