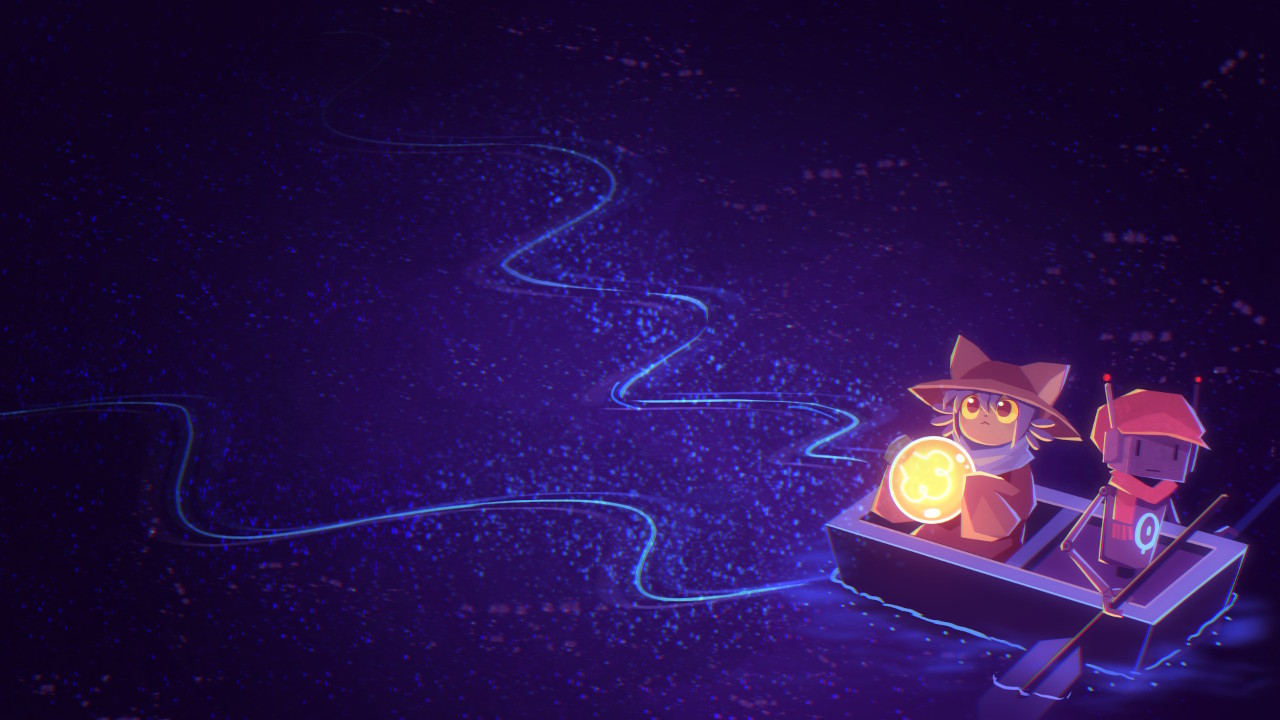 It appears that some strange operating system has been installed on your Switch. The World Machine allows you to interact with a dying world through a lost child named Niko. After getting your bearings, the two of you are tasked with returning the “sun”, in the form of a lightbulb, to its rightful place at the top of a tower. Niko is the prophesied Messiah and you are this world’s god; together you can save the world and get Niko back home.

OneShot is a very special game, so much so it’s difficult to describe in detail without ruining some of its magic. As such, I’m going to recommend the game right off the bat; especially if you’re not familiar with video games, this is the perfect introduction to what they can do that movies and books can’t. It’s a fantastic narrative adventure game with charming characters and fantastic music. The game’s only a few hours long too, so you can easily finish it in a sitting or two. Just go play it, either on PC or Switch, though I would recommend the former for your first time. Before you go though, a word of advice: you may only have one shot, but play it twice. If you’re already a fan of the game, let’s talk a bit about what the World Machine Edition brings to the table.

OneShot was originally released in 2014 as freeware. Staying true to that name, it was a game you could play exactly once: once you finish it or even just close the application, that’s it. Two years later, an enhanced version of the game was released on Steam, where you could close the game and play through the new Solstice route. OneShot uses aspects of being a PC game to solve puzzles and alter parts of the game world, so it seemed like a console version was impossible.

Until now, that is. Having played through the game twice on Switch, I can say OneShot makes the jump the best it can, with just a little bit of magic lost in the transition. If you’ve played the game, you probably can guess what I mean by that statement, but certain actions the game asks of you just aren’t the same as they were on a personal computer. Still, you’re doing basically the same thing, and you also gain some new features. 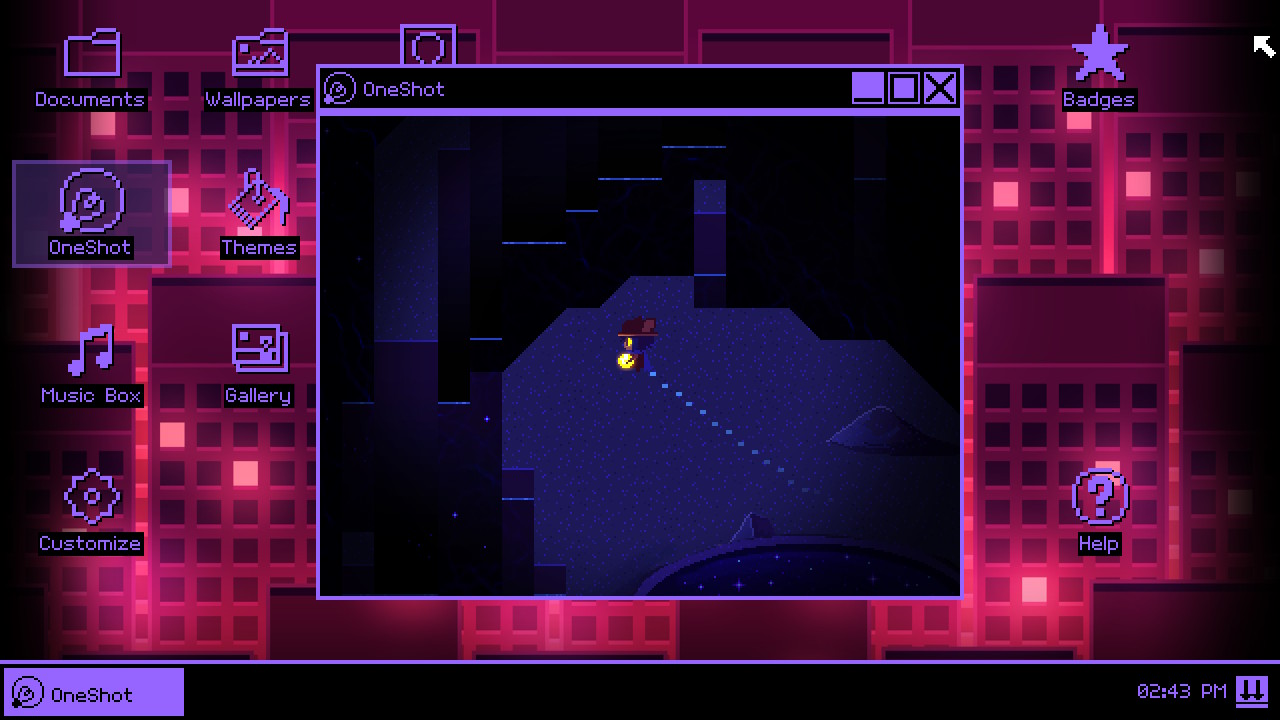 Before we get into that, let’s go over the basics of OneShot. You move Niko with the D-Pad or analogue stick, talking to characters and interacting with the environment. You can open your inventory with the X button to combine or examine items, and select one to then use on objects in the world. For example, early on you need a lens, but only find a camera in some ruins. You can then combine the camera and the screwdriver to have Niko retrieve the lens for use on another object. It’s pretty standard adventure game fair, until you’re “exposing the world to the void” to reveal hidden information. There’s some incredible stuff here that will challenge your perception of what a game can do.

The World Machine Edition will always boot into a desktop environment, where you can browse files like your save and documents, change the color theme and wallpaper, listen to music, and of course play OneShot. As you and Niko explore the world, you’ll come across objects Niko can’t interact with, but you can click on them with your mouse cursor to unlock more wallpapers, themes, etc. These are a real treat for fans of the game, and allow you to personalize the World Machine to your liking. For every character you meet, you can also find a short bio about them to view in the Friends application, where you can view all of their sprite art among other things. 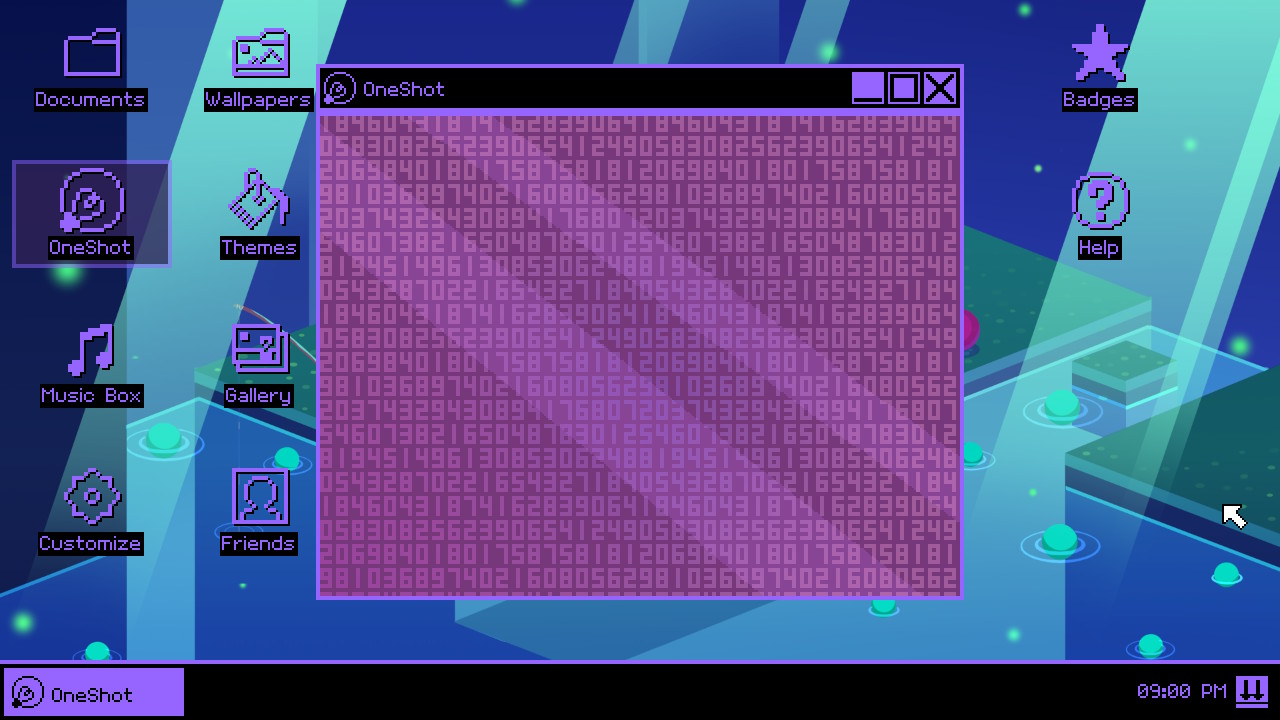 My favorite of these additions would be the music player hands down. OneShot already has an incredible, dream-like soundtrack, but in the music player you can actually speed up or slow down tracks. To further emphasize the feeling of exploring a dying world, some of these tracks are actually slowed down by default, and speeding them up will reveal what sounds like a more traditional RPG town tune. It’s an incredibly cool feature on top of being able to see Niko do an adorable dance to each song.

Because of the touchscreen support, I think the Switch is the perfect platform for the World Machine Edition. While moving the cursor and clicking works fine with the right stick and shoulder buttons, the touchscreen just feels more natural – like using a tablet. I never found myself misclicking on anything either, like accidentally closing a window when I wanted to minimize it. Speaking of, OneShot of course includes a fullscreen mode so you can focus on the game, which includes unobtrusive borders showing the major color of each area (going in reverse RGB order). 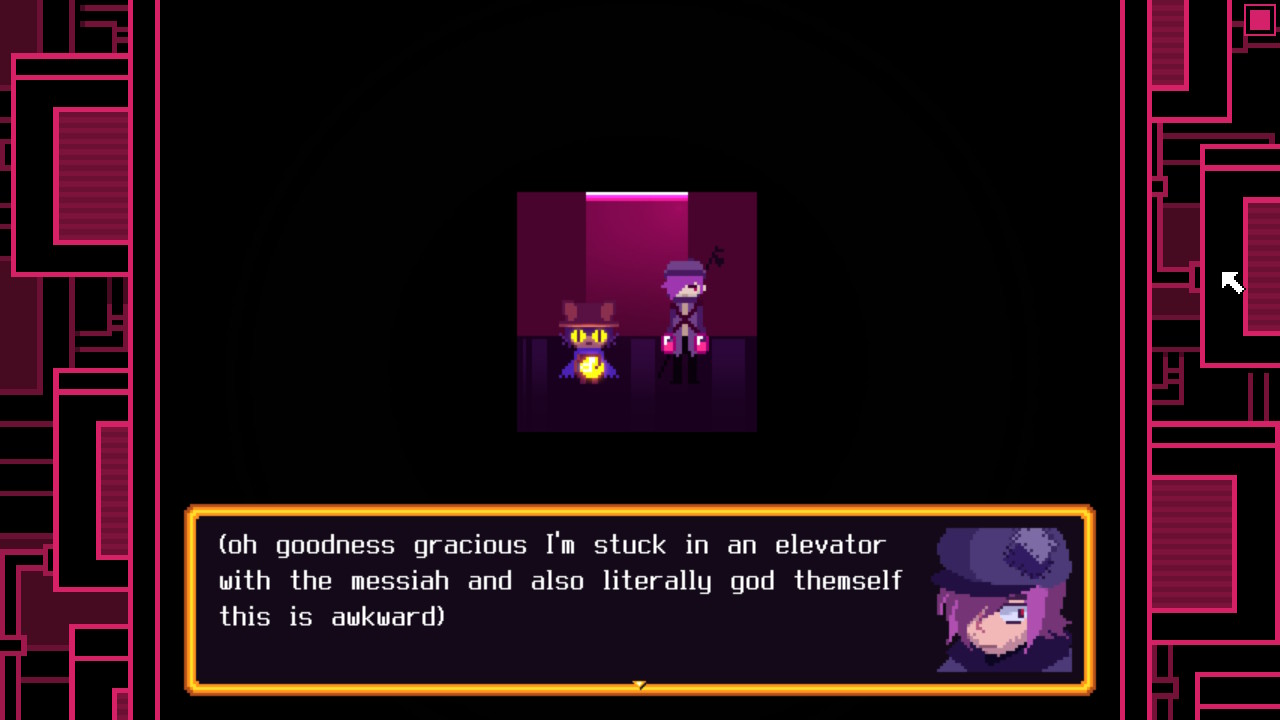 OneShot looks fantastic on the OLED Switch too, but I can’t help but want a bit of a graphical upgrade for this release. The new art on the desktop is lovely, but the sprite art could appear as overly simplistic for some modern players. I think the game still looks great and the simplicity is more of a stylistic choice, but adding just a smidge more detail on some characters or environments would have been nice.

OneShot is an incredibly unique experience, and one of my favorite adventure games. While there is a tiny bit of magic lost in the transition to console, the additions more than make up for it, especially for fans double dipping with the World Machine Edition. Whether it’s your first, second, or third time adventuring with Niko, this is an incredibly memorable journey that you will never forget.

David is the kind of person to wear his heart on his sleeve. He can find positives in anything, like this is a person who loved Star Fox Zero to death. You’ll see him playing all kinds of games: AAAs, Indies, game jam games, games of all genres, and writing about them! Here. On this website. When not writing or playing games, you can find David making music, games, or enjoying a good book. David’s favorite games include NieR: Automata, Mother 3, and Gravity Rush.
Related Articles: Indies, OneShot: World Machine Edition
Share
Tweet
Share
Submit