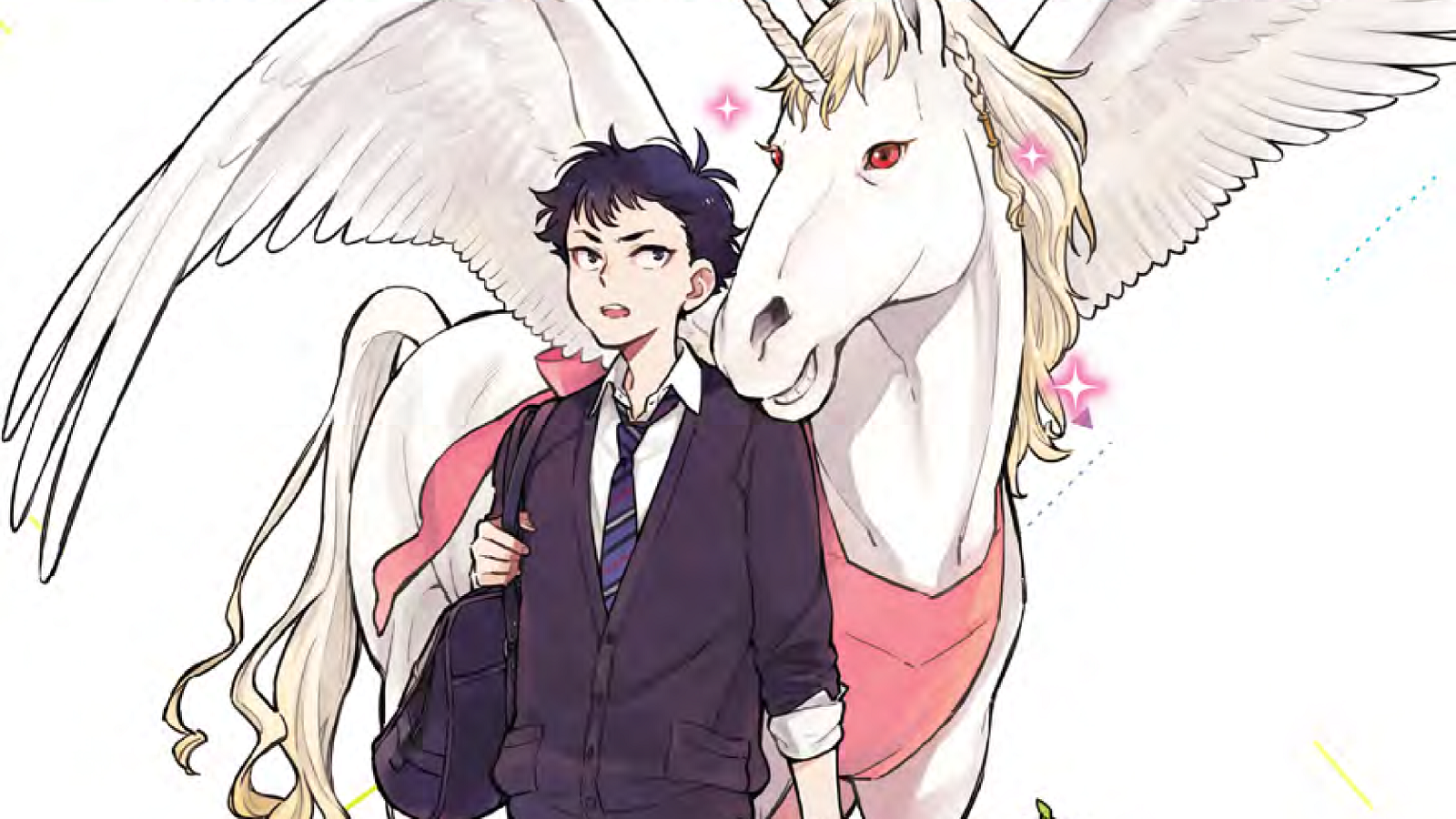 If you ask me what my favorite mythical creature is, I would pound my hands on the table and shout centaurs. (I really do enjoy the half-human/half-horse hybrids, what can I say?) While there have been manga based around centaurs (the most recent being A Centaur’s Life), unicorns, and all sorts of mythical horse breeds, the recent standalone My Father is a Unicorn attempts to go to some unexplored territory with its premise. While its lighthearted concept does wear thin halfway in, My Father is a Unicorn does show some genuine heart and effort in its storytelling. 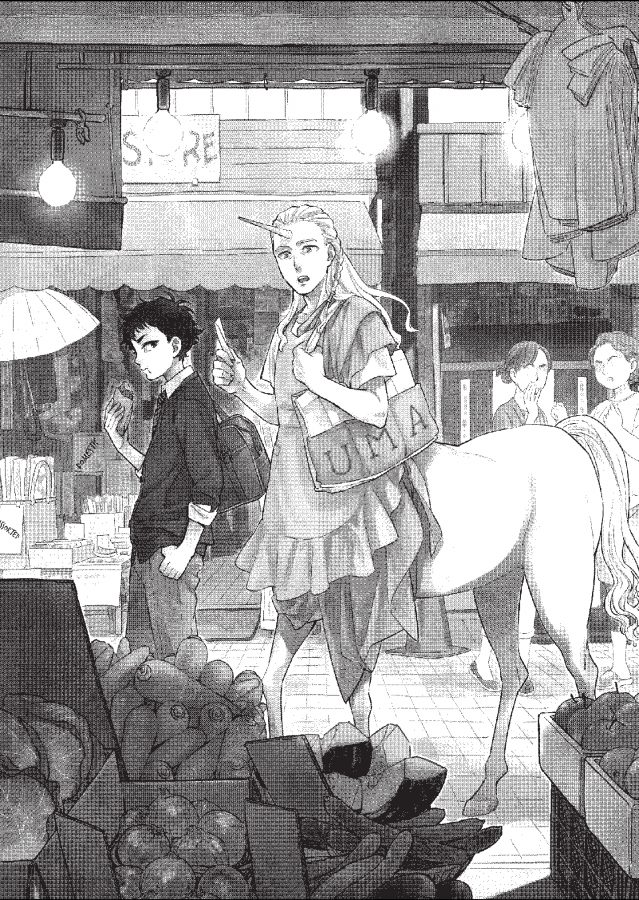 My Father is a Unicorn follows Uno Issei as his life turns upside-down when it’s revealed that his mom has married Masaru, a man who also happens to be a unicorn. Luckily, this is more of a Beast Children sort of affair, as Masaru can morph into a unicorn or man at any time (as well as a centaur-like or anthropomorphic variant). The volume hand-waves this awkward interaction as Issei is the straight man to Masaru’s pure yet awkward comedic relief. What follows is seven chapters of the duo as they try to settle their differences while also avoiding the ire of the local neighborhood committee, led by resident stickler Otogawa.

This premise is something that seems simple, and in actuality, it is. While there are some plots like Masaru initially refusing to let Issei eat anything that isn’t hay and vegetables to how Issei’s mom actually fell in love with a horse (she literally met Masaru whilst in horse form), the rest plays out with the usual slice-of-life tropes. There are also references to the gorgeousness of Masaru, and the manga doesn’t shy away from giving him a very bishonen cute look which works out in this story. The art style looks pretty nice, especially anything involving Masaru. I really enjoyed the centaur bits, and the panels where you can see him turning into a horse with a human body are pretty hilarious. 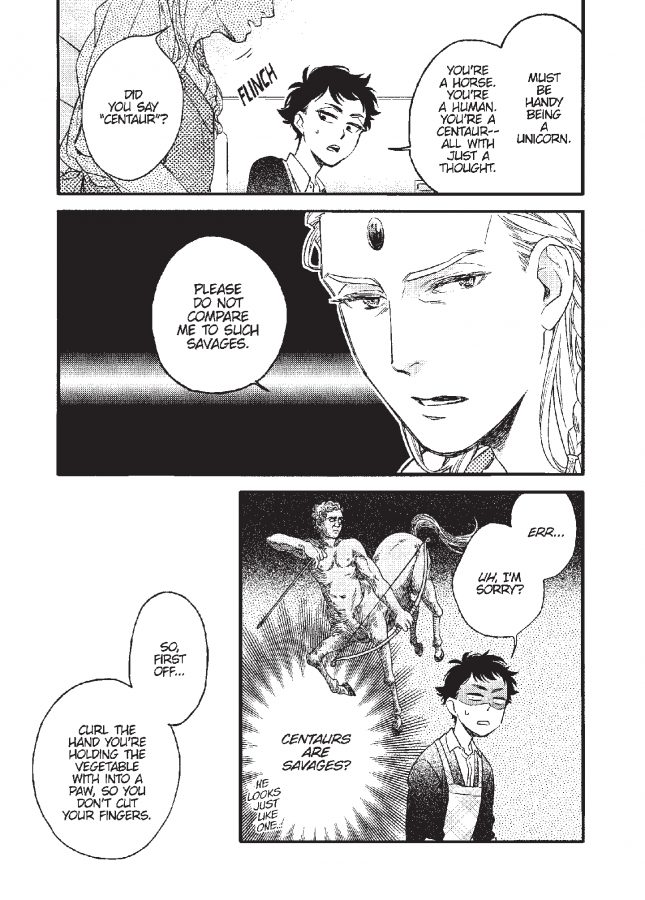 While it has its charms, My Father is a Unicorn can get predictable from time to time. The first few chapters boil down to “horse man does weird thing that freaks out kid,” and the joke feels stretched out near the midpoint. Because the complex where Issei lives prohibits animals from living there, the duo needs to come up with ways to make Masaru blend in. Again, it’s really nice slice-of-life stuff for the first half, but it can get pretty generic for the first 60 or so pages. It doesn’t help that Issei is the less interesting of the two and is at times a generic anime protagonist that’s stuck with a unicorn for a dad.

However, it’s after this point where the story goes to some emotional heights, as the last half of the story does have some legitimately great interactions with Issei, Masaru, and Otogawa. You get a feeling that Masaru really wants to be a good dad, and even though he has some childish tendencies and an odd innocence when it comes to raising Issei, he wants to be there for his stepson.

For some odd reason, My Father is a Unicorn feels like it’s too long and short simultaneously. As a standalone one-volume story, it feels like there were plot beats you could cut and generally have the same result, but there were still a lot of questions that need answering by the end. Sure, the fact that a horse and human could fall in love sounds hilariously awkward, but it doesn’t go anywhere other than that fact. Character development feels mixed; although I enjoyed Masaru’s arc of trying to connect with his stepson, I didn’t feel like Issei’s was that convincing, as he doesn’t really change until the very end. Due to this, it’s a heartwarming dynamic that doesn’t seem to go anywhere. 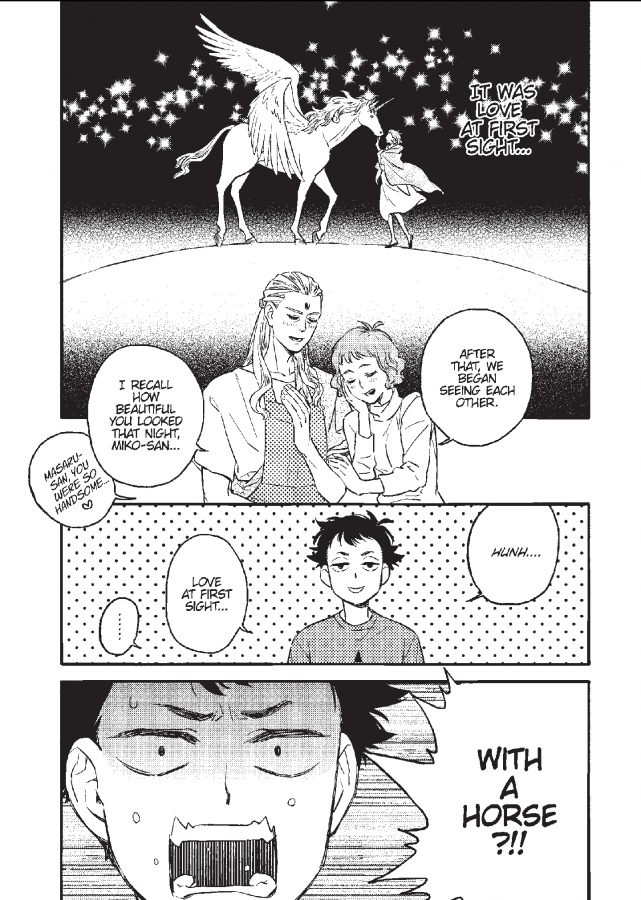 My Father is a Unicorn

While My Father is a Unicorn won’t be a groundbreaking read by any stretch, it’s entertaining enough as a light filler read for those that just want some half-horse, half-human family fun.

Elisha Deogracias is an aspiring accountant by day, freelance writer by night. Before writing for Gaming Trend, he had a small gig on the now defunct Examiner. When not being a third wheel with his best friends on dates or yearning for some closure on Pushing Daisies, he's busy catching up on shonen manga and wacky rhythm games. Mains R.O.B. in Smash. Still doesn't know if he's a kid or a squid.
Related Articles: Beyond the Page, My Father is a Unicorn
Share
Tweet
Share
Submit