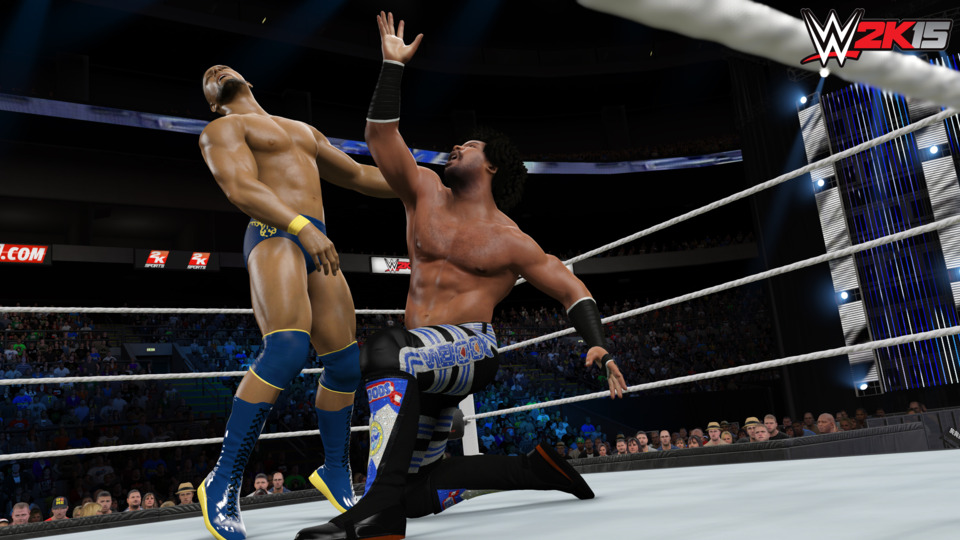 Wrestling is an art form that is constantly evolving, be it sometimes for the worst and sometimes for the better. The same could be said about video game franchises. You must consistently evolve over time or the shine on your video game will begin to fade. Evolution is something all games transitioning to the new consoles have experienced, with varying results. Balancing that jump to new consoles and building upon gameplay is a tough objective to achieve. As November begins to wrap up, it becomes WWE 2K15’s turn to show whether or not it can make the successful leap to our brand new hardware.

WWE 2K15 is a very different game than WWE 2K14, which is established within the first thirty minutes of playtime. You quickly notice that a whole host of features have been removed from WWE 2K14, including the most unique features added to a wrestling game in years, the Story Creation mode. No longer can you form your own storylines and build to your own PPV through custom promos and cutscenes backstage. Instead, you must settle for the WWE Universe mode. This allows you to build your own card and form your own rivalries, but the wrestlers in those rivalries never interact with one another apart from in-ring wrestling. You can also only have three rivals per brand going at once, which limits your capabilities drastically.

Creating your own character has been dramatically lessened as well. These reductions have made it very difficult to create someone that has any sort of personality to them. There is still quite a bit of attire variety at your disposal, which is nice. But creating your own entrance is lifeless with the song selection being as weak as the soundtrack itself (you cannot choose songs from the minimal soundtrack to be your entrance song). It comes down to either having to select another wrestler’s song or picking a generic hip-hop tune that just states “betta have my money” over and over again. Either that, or you can select generic metal, whichever suits your style.

The biggest loss in Create a Superstar comes in the lack of a Create a Finisher option. Creating your own finisher was one of the more fun things to do in the previous games; it added life to the biggest move within any match. Instead, you must now choose between a list of pre-made finishers, just like before the Create a Finisher mode was introduced. This is an issue that was already fixed in previous versions of the game, why would you remove it and create the same problem yet again?

One new feature introduced this year is the MyCareer mode. The basic concept of MyCareer is you create your own superstar and take him through NXT (WWE’s developmental program) and eventually fight your way through Smackdown and onto Raw, earning unique championship opportunities along the way. The core idea is a really impressive one, and the mode starts off pretty nice with you meeting Bill DeMott, one of the main trainers in NXT. From there you work your way onto the NXT roster and begin working matches. This is when the mode begins to show little signs of life.

In wrestling, there are bad guys (heels) and good guys (babyfaces). This is highlighted in the game by a meter which will swing one way if you are a babyface and one way if you are a heel. Once the mode begins, it tells you that your actions will decide which you ultimately become. Unfortunately, that seems like an attempt to pull wool over your eyes, as there are very few choices throughout the mode. This results in you just fighting matches fairly and winning, which ultimately makes you a babyface. Becoming a heel seems like a near-impossible goal.

You get to the more important brands by gaining social media followers, which goes up after every match. You must also increase your stats with currency you earn throughout the matches. The shell of a fantastic mode is there, but the execution is off base. WWE 2K15 features a host of disappointing and lackluster features that need an overhaul, MyCareer simply needs some fine tuning and refining before it becomes impressive.

Speaking of needing an overhaul, WWE 2K15 has also introduced a MyShowcase mode that has you playing through two of the more intense feuds in the past ten years. These feuds are in the form of CM Punk vs. John Cena in 2011, and Shawn Michaels vs. Triple H in 2002, both of which were very enjoyable to witness. This Showcase mode comes in substitution for the Attitude Era and 30 Years of WrestleMania modes that have been in the past two installations of WWE games. Each feud has around 19 matches to play, all of which have their own objectives you must complete. This becomes a frustrating chore as you try to lug your opponent around in hopes of earning yet another Finisher to perform in order to hit the objective. Ultimately, interest is lost very quickly, as the gameplay limitations and boring objectives overshadow how good the storylines were.

One of few positives in a fairly middling experience comes in the form of the visuals of WWE 2K15. The crowd, ring, and stage setup all look very impressive and mostly true to life. The animations are also very impressive, with wrestlers altering their punch/kick angles to actually hit their opponent as opposed to how they used to just punch/kick air and have the opponent sell the move all the same.

The only real negative in the visual department comes in the form of certain character models. While certain superstars like Triple H, Randy Orton, and Bray Wyatt look fantastic, others such as Dean Ambrose, CM Punk, and even Vince McMahon look awful. The poor quality of Punk’s model is understandable due to his departure from WWE in January, but having Vince and Dean Ambrose (currently one of the biggest stars in the company) look like clay figurines is absolutely inexcusable.

The in-ring action is by far the most important aspect of any wrestling game. In hopes of making the wrestling more real to life, 2K has implemented a chain wrestling system in WWE 2K15. This system has you going into a collar and elbow tie-up and playing a game of rock, paper, scissors with different wrestling positions, such as transitioning to a headlock, etc. No matter if you win or lose that, you fall into another mini-game that has you rotating the sticks in hopes of finding the hotspot. Once you find this hotspot, you will watch a circle fill up, once it fills up, you get to do that two or three more times. This gameplay mechanic ends up being about as fun as it sounds. While it is meant to make the game more realistic, it only slows the entire game down to a screeching halt. In standard games, you can turn the chain wrestling off, but in the Showcase and Career mode, you cannot. The system ends up making you want to use strikes more often and simply avoid grapples altogether.

There has also been a new in-match UI overhaul that features a three-part health meter. This health meter has a red, yellow, and green section, with getting your opponent in the red being required if you want the 1, 2, 3 count. There is also a stamina meter, which is as frustrating as ever once again. Stamina is something that should be taken into account during a match, but integrating that well into the WWE 2K series has been near impossible for developer Yukes up to this point. That has continued this year, as you will find yourself standing there aimlessly just waiting for a certain part of your stamina to refill so you can perform your finisher.

This is frustrating enough, but that only heightens once you get your opponent in the corner. I had an experience take place multiple times where I had my opponent in the corner, waiting on my stamina to refill so I could perform my finisher. As it just barely filled to the point I needed, I pressed the finisher button (triangle on the PS4) and simply had the kick that started my finisher graze off the opponent. Of course, that was not my finisher and did absolutely nothing except drain my stamina once again, leaving an opening for my opponent to unleash a variety of moves onto me. Frustration does not even begin to describe this sequence of events.

There are also some other aspects that have continued to be disappointing. Two of those include the physics and AI of your opponents. There have been a few comical moments where weapons have gone flying from the ring just because a wrestler has grazed them. I even had one situation where a sledgehammer was caught in the ropes and inside a wrestler, as the wrestler walked away from the ropes the sledgehammer was pulled in the ropes like catapult. The weapon was then launched like a missile up the entrance ramp. I have also experienced situations that had the AI become confused and just repeat the same move over and over until I finally countered.

One thing we have practically given up on improving is the commentary.  Jerry “The King” Lawler and Michael Cole continue to provide all commentary for every brand, despite Lawler only providing commentary for Raw in real life. The phrases they repeat are the same we have heard for many years now. They have included a few new lines talking about the bigger stars in WWE such as John Cena and Randy Orton but for the most part, you will have the same generic phrases such as “oh my!” shoved down your throat. If I have to hear “He’s putting those educated feet to good use!” one more time, my head may explode.

The WWE 2K series has experienced a very rough transition to the “next generation” of consoles. After two straight years of solid releases in WWE 13 and 2K14, Yukes has hit a wall. As it is in wrestling, when you hit a wall, you have to figure out what to do next. One thing is clear, this series has taken a large step in the wrong direction. A character change may be required in order to get this series back on track.