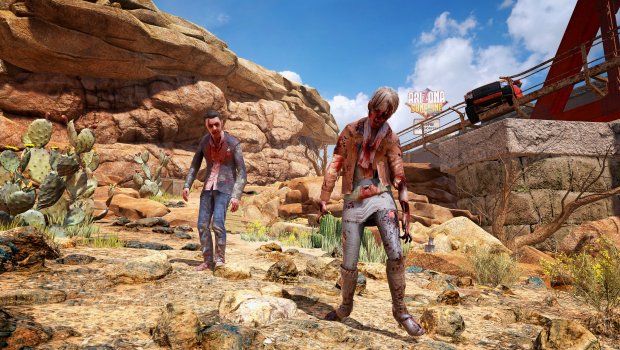 Zombies. We have all heard of them, but these undead creatures have been overused and run into the ground due to every game developer and their mother making their own rendition of these brain-craving beasts. While some of these games have been incredible, like Telltale’s The Walking Dead and The Last of Us, there are far more games like The Walking Dead: Survival Instinct and Infestation: Survivor Stories that are far from groundbreaking and can leave a bad taste in your mouth. With VR game Arizona Sunshine releasing on PSVR, it could breathe new life into the living dead.

Aim for the head

Arizona Sunshine plays like a first-person shooter, but with the advantage of being in VR, players are able to lift their gun and look down its sights to line up the perfect shot. This mechanic was amazing to experience, especially in the sections where you get to use a sniper rifle. Looking down a long range scope and holding my arms just right in order to shoot a zombie’s head off from three hundred yards away was sheer joy, and I found myself excited to play these sections every time. While the sniping sections were impressive, the minute-to-minute gunplay left something to be desired. The less than perfect tracking of PSVR can affect your aim and lead to some unfortunate and disappointing deaths. While you can switch to easy mode, which adds a laser sight to your guns to help with aim, the laser sight is red and with the game’s color palette can be very hard to see in brighter areas.

Controls in VR games are in a weird spot right now. No one seems to really know which control scheme works the best and is the most comfortable. Arizona Sunshine handles this very well, however. Initially, the game starts players out with a fairly standard teleportation mechanic, that is, players point to a spot and teleport to it. This method is typically used for people less acquainted to VR and not one that I find to be all that enjoyable to use. Luckily, in Arizona Sunshine there are a number of different options for controls. Having played a good amount of VR games, I opted to switch to smooth turning, instead of the degree based turning, and ditched the teleport for the walking setting, which allows you to use X on the motion controller to move forward. This was the first time that I had played a VR game that allowed free roam controls without a dualshock, and while they did bother me for a moment or two, I eventually found the controls to be extremely comfortable and would like to see this control scheme implemented in other VR games.

What separates Arizona Sunshine from other zombie games is the incredible way that the game’s narratives changes tone and takes player on an emotional journey. Starting relatively upbeat, Arizona Sunshine initially feels like a comedic game. You control the main protagonist as he walks around shooting zombies, or as he calls them Freddys, and making jokes. As you progress however, the game takes a darker tone and comes off as much more believable than the casual jaunting about of the beginning of the game. This helped to humanize the player character and add much more depth to the game as I could connect with him on an emotional level.

This amazing change in feel is, in no small part, thanks to the game’s incredibly well-acted main character. The character is so believable and interesting that I couldn’t help but to find myself immersed in the game’s world. Whether it would be the character making a bad joke or screaming in disappointment, every line felt like it was delivered with purpose which led to the game being elevated far above most other zombie games.

Hey Freddy, is that you?

Unfortunately, there were a few glitches that really dragged the game down. The main glitch that I experienced was getting stuck within objects. Whenever I would move too close to an object, my face would phase through it. At this point, I would lose any ability to move and had to click buttons randomly for about ten seconds before I could escape. While this wouldn’t be a big hindrance if it was occasional, this glitch happened to me about ten times in my roughly four hours of gameplay. The only other glitch that I experienced took place at a certain point in the game where you had to jump from one platform to a lower one. While using the teleport controls, I was never given the option to jump to the lower platform. I found myself returning to this area multiple times before switching to the free roam controls, at which time I was able to progress without error, but I had already spent a good amount of time confused and getting nowhere.

Something that completely boggled my mind was the decision to put a horrendous green filter over the screen every time a player dies. This sudden attack of color was as if the game wanted to slap you in the eyeballs and remind you that you’re just playing a game, instantly killing any immersion that the narrative had created. I played four or five times harder if only so I never had to see that contemptible chroma again. It still haunts my dreams.

While Arizona Sunshine might have been an incredible game on other VR systems, the PSVR version seems to be lacking due to the platform’s limitations. An intriguing narrative and impressive voice acting make Arizona Sunshine an enjoyable, if short, experience. Some minor glitches hold the game back, but excellent sniping and comfortable controls make up for these inconveniences.

Zach has been a gamer ever since he picked up a PS1 controller and played Asteroids for the first time. From FPS games to Point-and-click adventures, Zach knows no genre that he can't get into. When not playing games, he spends his time looking at the newest computer components on the market and dreaming of a day when he can buy them.
Related Articles: Arizona Sunshine
Share
Tweet
Share
Submit