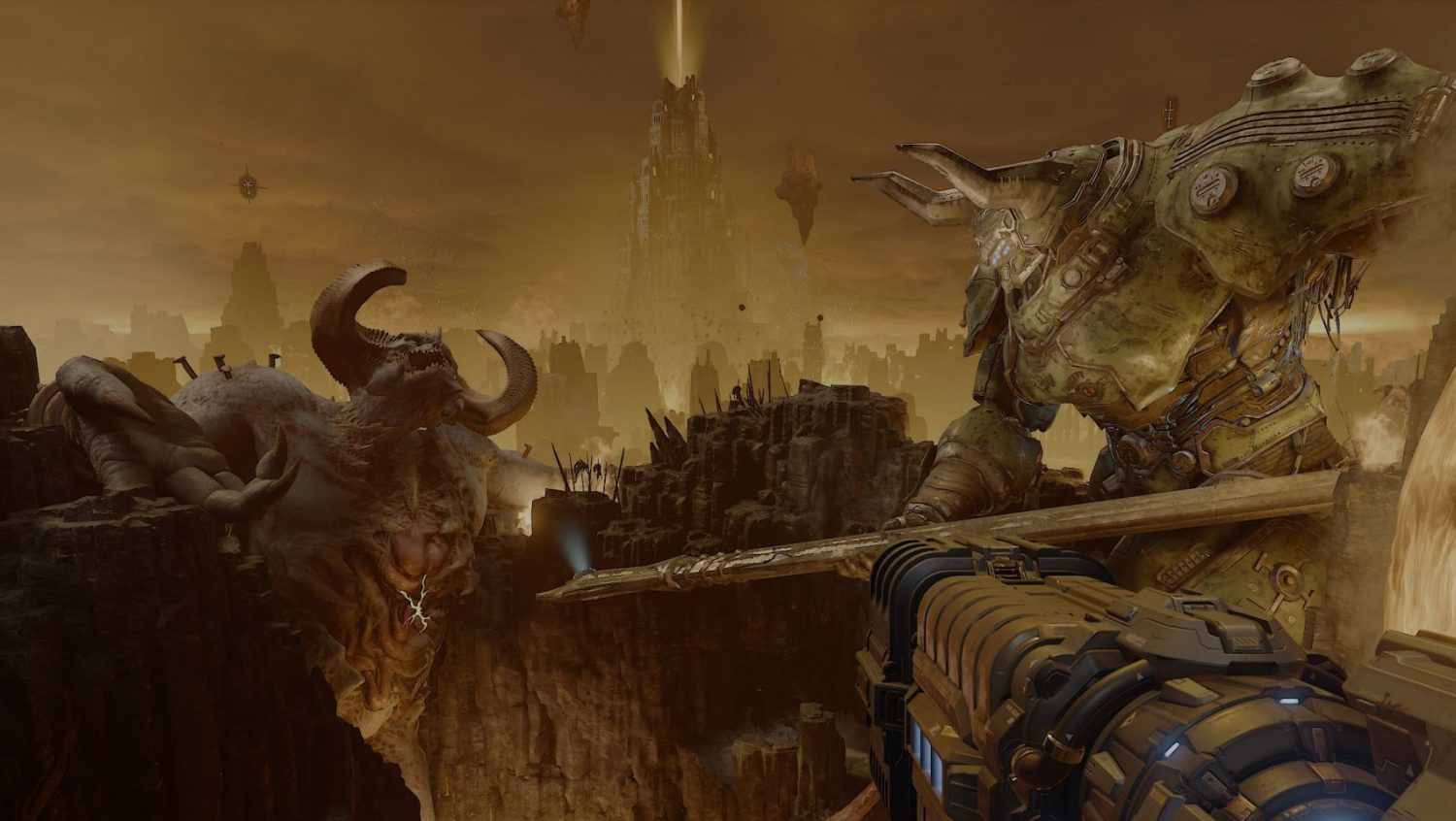 DOOM Eternal is bigger and better than DOOM (2016) in every way. It’s fast, bloody, difficult, and hellishly fun. I enjoyed DOOM (2016) but I don’t think I could ever go back. DOOM Eternal adds some much-needed depth to the arena-style shooting and I just can’t get enough.

Something you will notice right out the gate is just how much better DOOM Eternal looks. More than just improved graphics, what I noticed most was the incredible scene variety and all the work that went into the backdrops. The backgrounds have incredible scenery, such as giant demons and robots, that made me pause and just take in the sights.

I appreciated these moments of downtime because the shooting is just as quick but far more complex than DOOM (2016). I needed these moments just to catch my breath. There are brand new enemies this time around such as the Gargoyle, a flying imp-like creature, The Whiplash, which is a cyber snake, and tentacles! Not the fun kind either, no, these are the ones that just pop out of the ground to attack and are just generally annoying. 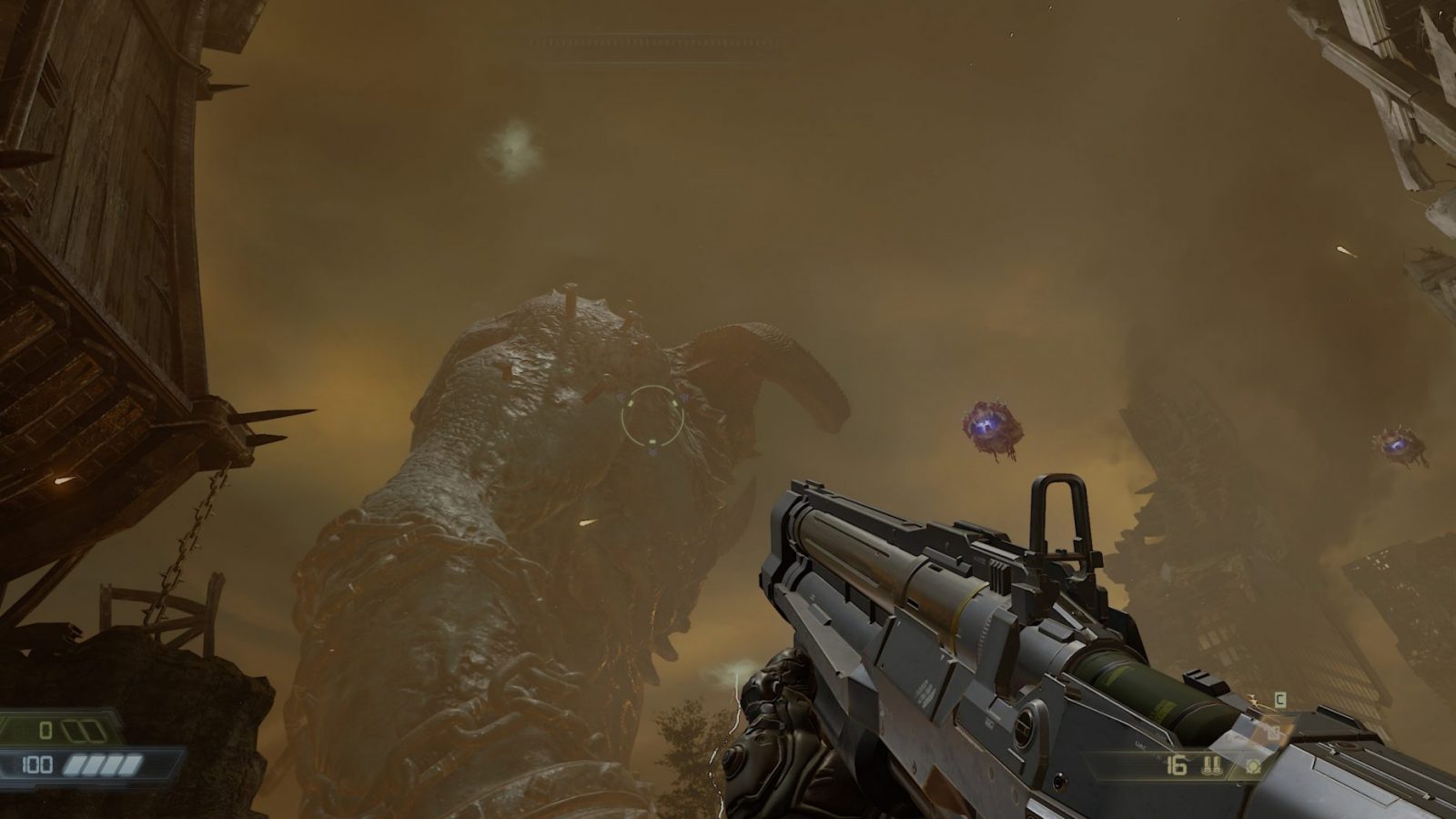 I love these backgrounds!

Along with some new additions are some oldies that didn’t appear in DOOM (2016) such as the Arachnotrons which are brains on four cyber legs that jump around while shooting exploding orbs and a rapid-fire turret. That turret can be trouble, so it’s best to blow it off.

Blow it off? Yes! DOOM Eternal introduces enemy weak points. The Arachnotrons have a turret you can blast off to limit their attacks, the Mancubus has two arm cannons, and The Revenant has the two shoulder rockets. Most major demons have a weak spot and I love this idea. It gives combat another layer as you determine which threats you should take out first. Do you want to run around and take out the weapons first or work on killing them and limiting their numbers? It’s a fantastic addition that keeps every battle fresh.

Speaking of keeping things fresh and great additions, I really enjoyed the platforming. It does a great job of slowing the pace down at times for you to relax and catch your breath before the next big fight. The monkey bars can send you flying across the battlefield and greatly increase movement. However, it is really funny to picture the big, strong Doom Slayer just swinging on some monkey bars.

Platforming and monkey bars aren’t the only new additions. One good addition is the dash ability. Dashing around the battlefield to quickly glory kill a demon or get some needed health is always satisfying. It’s also used in platforming but it doesn’t add a whole bunch here. It can be fun to drop down and dash to a ledge to find a secret, but I prefer its use in battle.

The one not as good addition is the blood punch. Your new standard melee attack is drastically weaker to the point that it’s pretty much useless. Instead, you can use glory kills to charge up a Blood Punch. This is a super melee attack that deals damage to all the enemies around you. However, it’s really easy to use by accident as it’s just tied to your normal melee button. I really didn’t care for this addition and would have much preferred having a more powerful standard melee. I mean, you can’t even really kill zombies with it anymore! It makes the Doom Slayer feel weak.

Much like DOOM (2016), there is a pretty good story here if you want to partake in it! The lore books are just as interesting to read and I love learning more about the Doom Slayer and the demons he is slaughtering. If reading isn’t your style, however, you can just skip them and get right on with the killing. 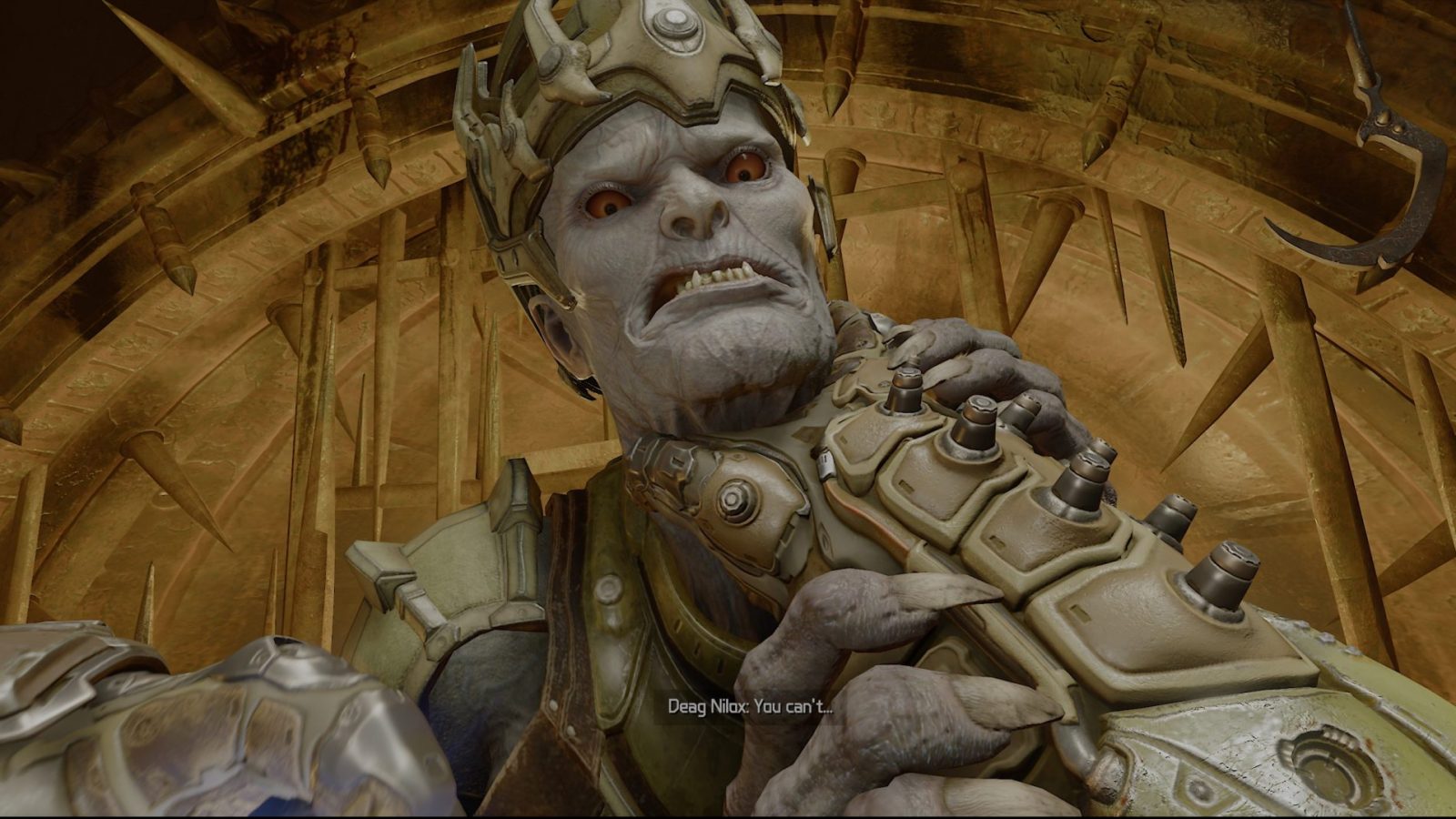 The story itself follows the Doom Slayer as he attempts to save Earth by killing two demonic priests and defeating Khan Maykr. It’s simple enough, but engaging thanks to some impressive environments and set pieces such as shooting yourself out of a gun to move across a ship or when you first get the BFG. I won’t spoil it, but that is a pretty great moment. Most importantly, the Doom Slayer’s attitude has returned. He does not care about anything other than slaying demons and it is great.

Ah yes, what would the Doom Slayer be without his weapons? Those are pretty much exactly the same from DOOM (2016). The Super Shotgun gets a hook now that you can use to pull yourself closer to an enemy, but weapons are the one area that hasn’t drastically improved. Not that that’s much of a problem since the weapons are just as fun as they were in DOOM (2016). You do have less ammo this time around though so be prepared to use all the weapons at your disposal.

While not guns, the Doom Slayer did bring a little extra to his arsenal of weapons. The flame belch allows you to set demons on fire which causes them to drop armor. You get an ice grenade this time around that freezes enemies in place. You will need to use these to survive. While the complexity makes DOOM Eternal engaging, it can also make it difficult. You have a lot of new toys and it can take some time to figure everything out. Even your old friend, the chainsaw, is a bit different this time. Instead of collecting canisters, you have one bar that regenerates over time. While you can still collect canisters to get three bars, I almost never did this. I needed the ammo the chainsaw gives too often to save it. 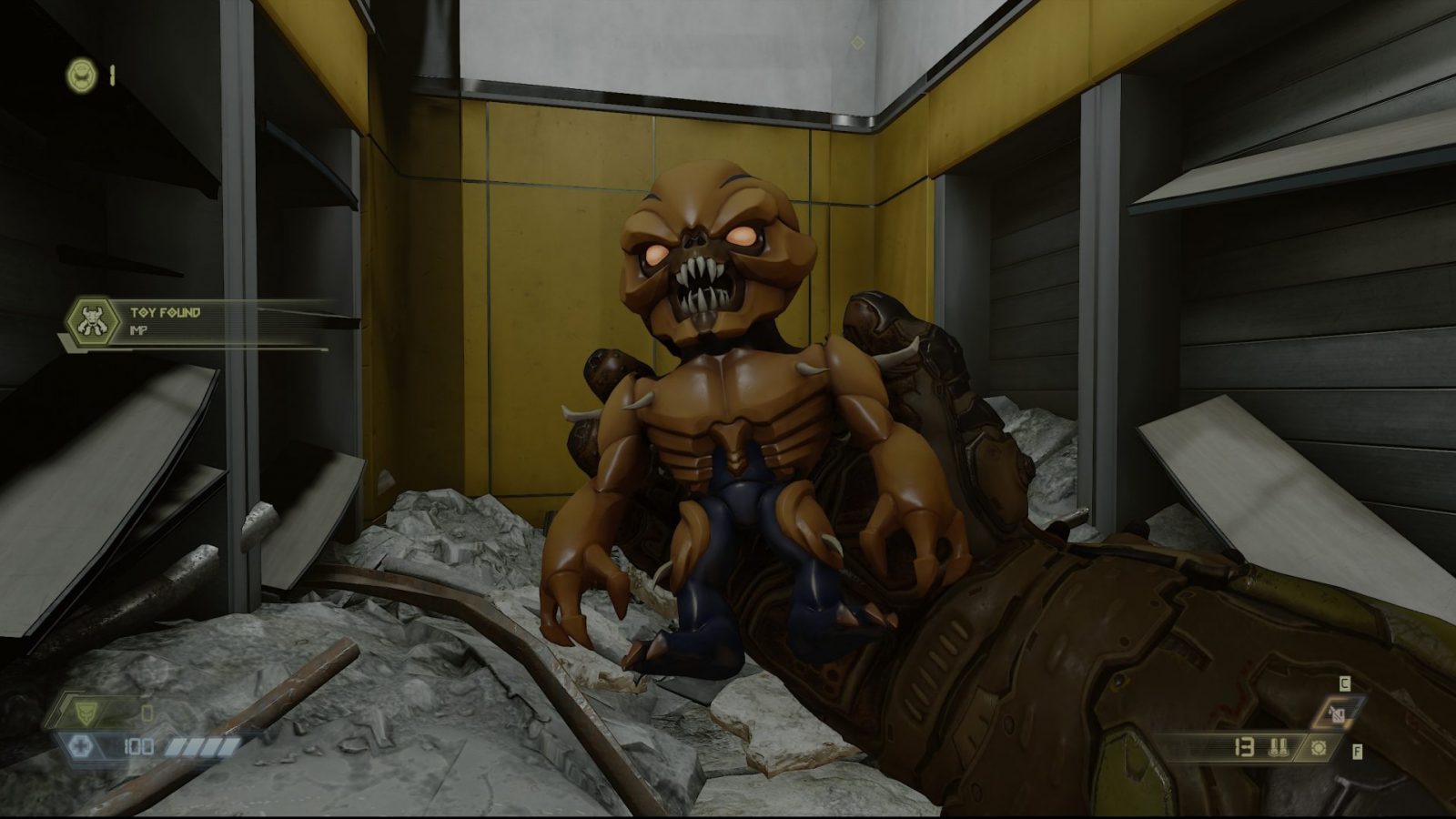 I actually love these toys and I want some in real life.

Okay fine. I’ll talk about the multiplayer. It’s…not great. After playing some rounds as both demon and Slayer, I didn’t care much for it. The balancing is really off. Almost every match I played the Slayer won. Demons just don’t do enough damage and get killed way too quickly. The Slayer is just far too powerful. I’m certainly not going to come back for the multiplayer.

I am, however, going to return. I have some collectibles to collect and Slayer Gates to slay. Slayer Gates are new additions that offer very difficult combat encounters for those looking to test their mettle. They are great fun, but I suggest coming back after you beat the game and are properly upgraded. Collectibles are expanded upon to include toys of enemies this time around! They are adorable and I love them. Thankfully, collecting them can be quite fun! One of the new secrets are cheat codes! You can get things like infinite lives and ammo and just burn through levels looking for collectibles.

Don’t worry, DOOM Eternal doesn’t introduce a lives mechanic. That I would not enjoy. Instead, dotted around the levels are “extra lives” which allow you to instantly respawn and continue the fight rather than reloading a checkpoint. This is a great way to keep the pace going and is a fine reward for players willing to explore. Exploring all these little secrets is also much easier with the new quick travel mechanic. Once you get near the end of the level, you can warp back to previous places and pick up anything you may have missed.

DOOM Eternal is drastically better than DOOM (2016), which was already an incredible game. Some players may not enjoy just how much more complex DOOM Eternal is, but I find it addicting. This is one of the best shooters I’ve ever played.

DOOM Eternal is drastically better than DOOM (2016), which was already an incredible game. Some players may not enjoy just how much more complex DOOM Eternal is, but I find it addicting. This is one of the best shooters I’ve ever played.

Austin Fern has been playing video games his entire life. The first console he truly fell in love with is the PlayStation 2 with Sly Cooper, God of War, and many others really leaving an impression. He enjoys all genres of games from FarCry 5 to Danganronpa and everything in between.
Related Articles: DOOM Eternal
Share
Tweet
Share
Submit