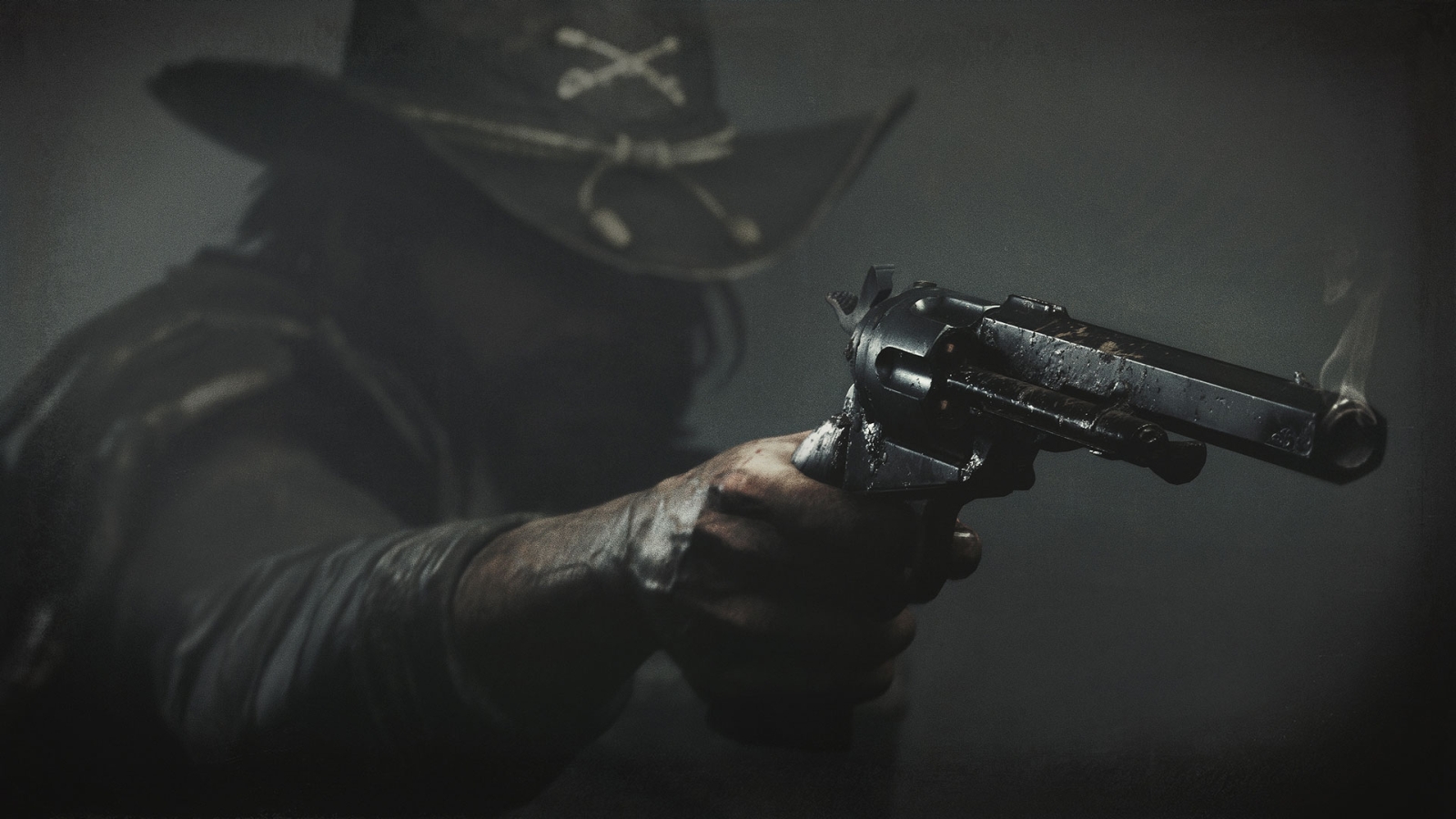 Hunt: Showdown is not quite the game I expected. A mixture of player vs. player, survival horror, and battle royale, blended with a dash of competitive gameplay, it’s a little hard to describe beyond saying PvPvE, and even that doesn’t quite capture it. Let’s rewind time a bit and hit the swamp for something completely unique.

Hunt: Showdown takes place in a version of the early 1890’s where tears in the fabric of our universe belch awful undead creatures and far worse into our world. Shambling zombies, demonic dogs, massive spiders, and more have decimated the swampy bayou of Louisiana. Folks with any good sense have moved away, but a few brave souls have decided to stay — they like to hunt these monsters for sport.

Much of the lore on the horrible creatures you encounter in Hunt: Showdown comes from research. And by research, I mean hacking them into small bits and filling them with buckshot until they sputter up their secrets for your Book of Monsters. Gunning down the various denizens usually has a few steps like killing them, banishing them (more on that later), or hunting them as part of a bounty. It does help to add variety in a game that sorely needs it. 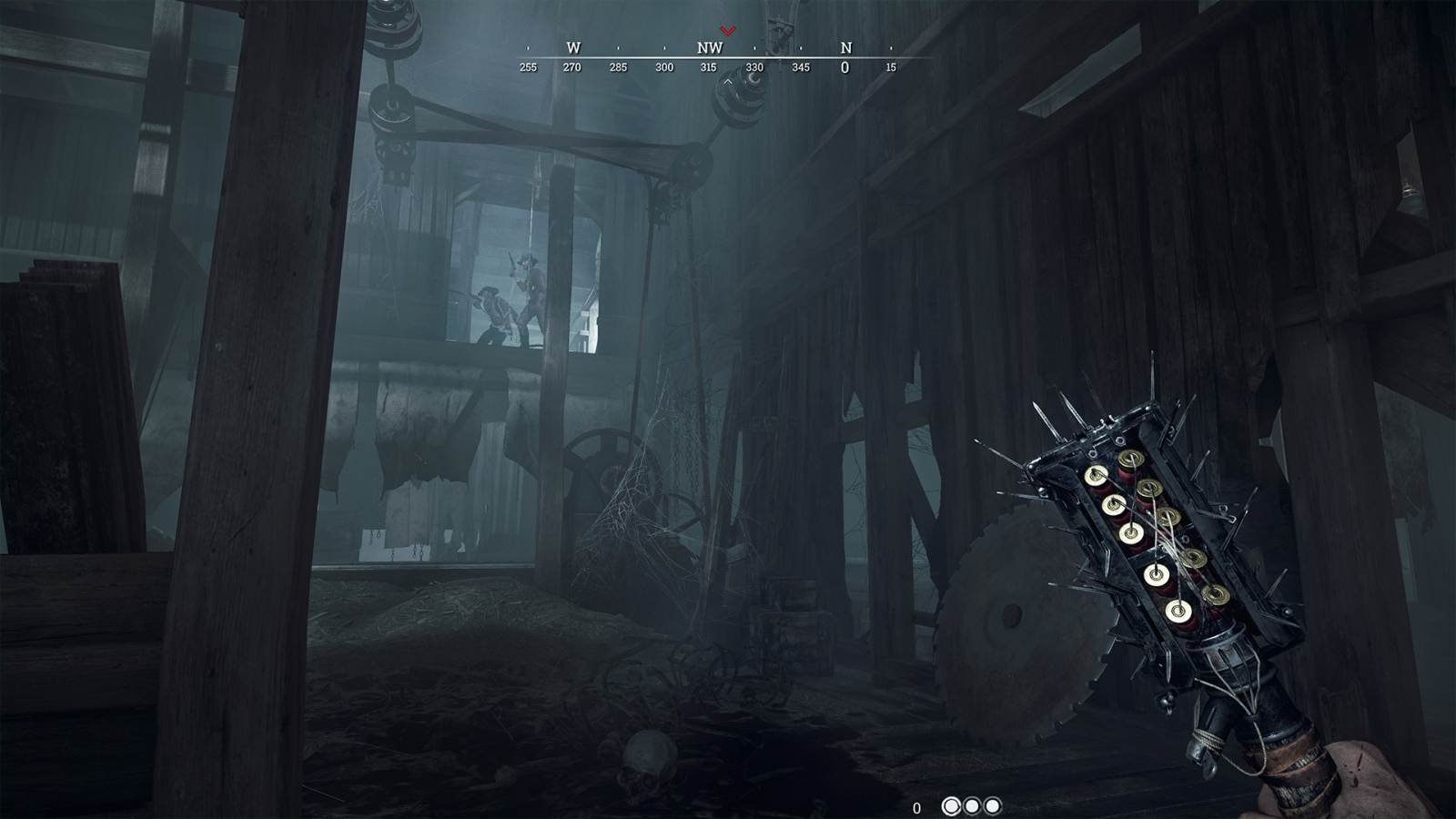 Explosives can be devastating when you catch a group unawares.

There are some unique hunting elements to Hunt: Showdown, as the name would suggest. Hunting is accomplished via “Dark Sight” – a vision mode that helps you follow little tears in the universe. These will lead you to clues that ultimately provide the location of your bounty. Given that there are a number of spawn locations, wading through the peripheral beasties to find the clues is critical. Once these beasts are destroyed, you’ll have to banish their souls, and then flee the map to retain anything you’ve picked up.

In some ways, Hunt: Showdown reminds me of the Dark Zones from Tom Clancy’s The Division 2. Much of what you are looking to accomplish is a bit of looting, possibly smashing other hunters in the face, and then escaping with your hard fought and likely ill-gotten gains. Rather than following the usual competitive formula where you earn goodies by wiping out everyone else, you’ll more likely (at least in my experience) work together to take down the horrible monsters, preserving an uneasy peace and then backing away slowly towards the exit. Sure, there are moments of excitement when somebody gets it in their head that they might want to take what you have, but those are surprisingly infrequent. Perhaps I’m getting ahead of myself.

Hunt: Showdown can be played solo, in a pair, or as a trio. In total, 12 hunters will take the field, so it is likely that, regardless of your team’s size, you’ll either participate or witness the initial Hunger Games-esque initial bloodbath. Once that settles down, the real hunting (and the grind that comes with it) begins. 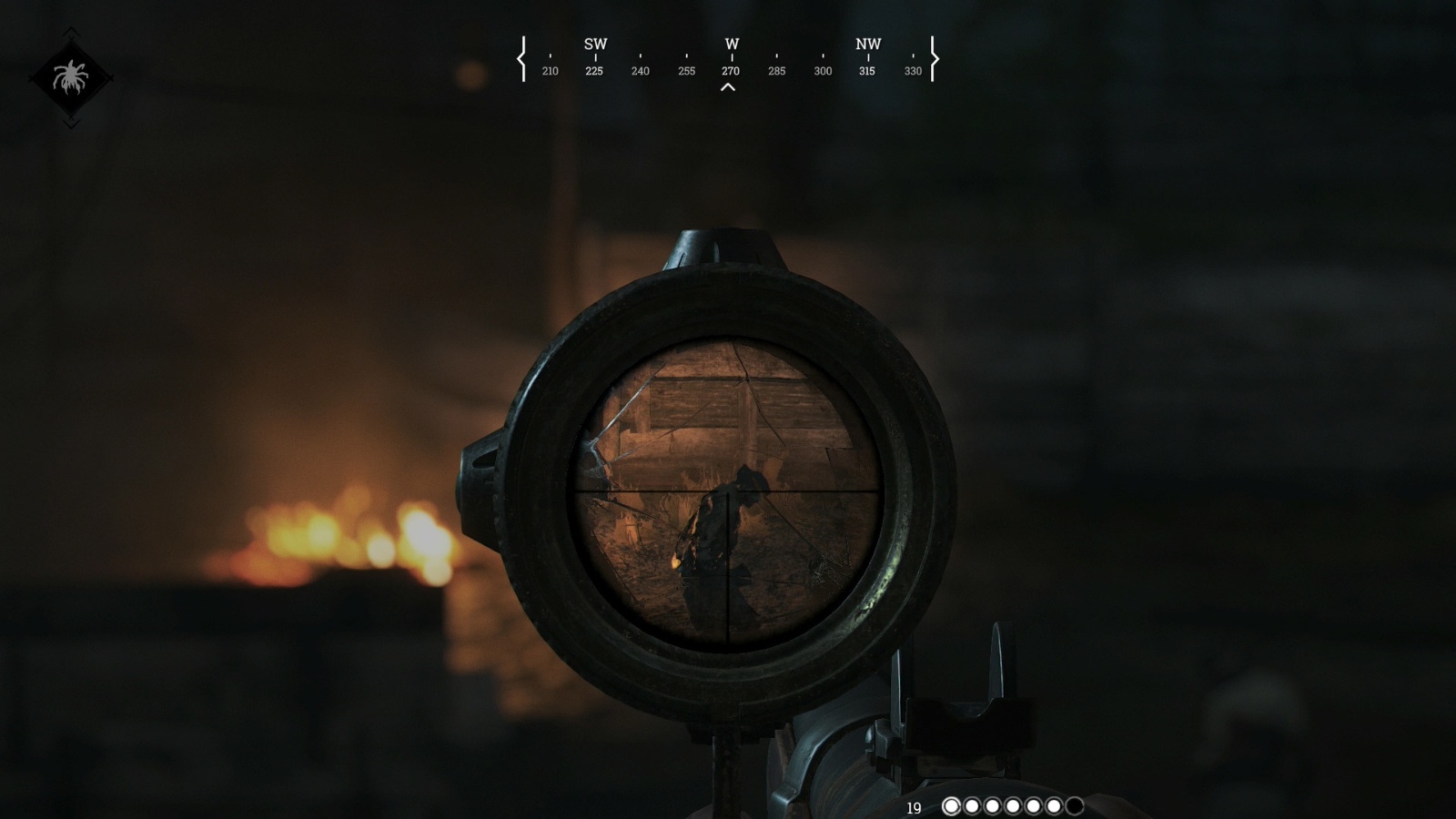 I saved a bullet, just for you.

The real hitch with Hunt: Showdown comes from the fact that it only has two maps (Stillwater Bayou and Lawson Delta) with four time of day settings — foggy, daytime, afternoon, and night. The maps are rather spacious with quite a few areas to get into trouble. Not unlike a fast-paced shooter, there are plenty of sight lines, ditches, foliage, and wide open spaces to duke it out. With the enemies and bosses being entirely random, and the random nature of the other players in the field, you’ll find yourself more than a little paranoid. It’s this one aspect that Hunt: Showdown captures perfectly.

As Hunt: Showdown takes place in the early 1890s, weapons are downright primitive. You’ll be working with machetes, six shooter pistols, Mosin-Nagant single-shot rifles, crossbows, and similar weapons. In all there are roughly two dozen weapons, some of which have to be unlocked by finding and using them repeatedly to log them into your Book of Weapons. Before we can talk about weapons and unlocking them, we need to talk about Bloodlines.

Bloodlines are the character progression system for your hunters. At level 1 you can handle a handful of weapons and a basic knife. Kill enough baddies and other players and you hit level 2, unlocking the Winfield M1873C rifle. Level 3 puts money in your pocket, level 4 lets you use the Nagant M1895 pistol, and so and so forth until you hit level 100. At that point you can “prestige”, resetting all of your unlocks, but getting a shiny new player badge to indicate your progress.

With permadeath, you’ll see this screen a few times.

Beyond the weapons, there are also a series of tools and consumables to help you survive the hunt. These include fire bombs, dynamite, trip mines, decoys, poison, and first aid kits. These are also unlocked through leveling up.

If you are getting the gameplay loop from the backwards way I’ve described it, you are catching on to what I’m saying. Hunt: Showdown’s core is wrapped tightly around a grind so deep that only the most dedicated will stick around. Once you’ve gotten a taste of the two maps and their dozen or so combat chokepoints and hiding spots, it turns into something akin to PUBG or Red Dead Redemption Online. That’s not to say that it’s not fun, but how many times do you want to run the same map just to unlock a pistol? What if I told you that once you hit level 15, death is permanent and you lose all your loot?

When your hunters die (and they will), you’ll need to recruit new ones. They’ll come with a little bit of equipment, and for a few more dollars you can nab hunters that are already higher tier. It’s a shortcut from having to grind out experience from level 1, but it does mean grinding out equipment and money all over again.

There is one aspect of Hunt: Showdown that comes as no surprise. Developer Crytek has put together some gorgeous games, and Hunt: Showdown is no exception. The southern gothic feel is captured nicely, and the beasties are gross and well-rendered. That said, there are a handful of environmental textures that are surprisingly low resolution. I’m not sure if that’s a glitch, or if that’s just something that could use work, but they do stand in stark contrast to the gorgeous weapons in Hunt.

I came away from Hunt: Showdown a little let down. The premise is good, the setting is something new, and many of the gameplay loop elements are unique. Better still, the combination of PvPvE sets the stage for something amazing, but that stage is just too damned small. With too deep a grind, and too few maps, Hunt: Showdown has just too little content (currently) to match its ambition. But hey...at least the hunting is cool!

Ron Burke is the Editor in Chief for Gaming Trend. Currently living in Fort Worth, Texas, Ron is an old-school gamer who enjoys CRPGs, action/adventure, platformers, music games, and has recently gotten into tabletop gaming. Ron is also a fourth degree black belt, with a Master's rank in Matsumura Seito Shōrin-ryū, Moo Duk Kwan Tang Soo Do, Universal Tang Soo Do Alliance, and International Tang Soo Do Federation. He also holds ranks in several other styles in his search to be a well-rounded fighter. Ron has been married to Gaming Trend Editor, Laura Burke, for 21 years. They have three dogs - Pazuzu (Irish Terrier), Atë, and Calliope (both Australian Kelpie/Pit Bull mixes).
Related Articles: Hunt: Showdown
Share
Tweet
Share
Submit