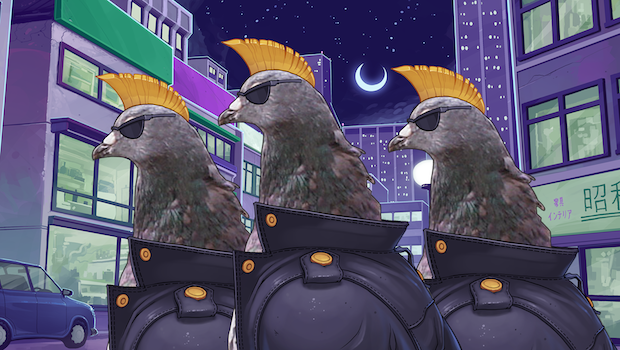 I once heard the saying, “Love is for the birds,” and interpreted it as a dismissal of the idea that human interaction and emotions could create anything of value. However, Hatoful Boyfriend developer Mediatonic seems to have taken a more literal interpretation and made a game about loving birds.

Hatoful Boyfriend, a clever play on the Japanese word for pigeon, is a game about school life, romance, and living as the only human in a campus full of birds. Your character, Hiyoko Tosaka, is the first human student accepted to St. Pigeonation’s, the most lauded school for birds in the nation. Playing out in visual novel form, you’ll manage your everyday activities, join extracurriculars, and spend time with your most beloved feathered friends.

Each character gets a human portrait alongside their actual pigeon body.

While already a strange premise to start, Hatoful Boyfriend amps up the crazy and touches on every genre trope imaginable over the course of its many, many routes. Who you spend time with will directly influence whose affection you gain, and each of the different birds has a very different story to tell.

Will you spend time with the shy bookworm in the library, who seems to be all but invisible to the rest of the academy? Or are you more into pompous, boisterous pigeons, born into the life of a rich aristocrat, whose destiny is surely set and looming ever closer? Maybe you should just hang out with San, the only pigeon without a corresponding human portrait, whose obsession with pudding and athleticism makes for one of the wildest routes in the game.

It’s safe to say that Hatoful Boyfriend covers the bases of every romantic route common to the genre, but it does so in a way that’s both reverent of the medium and happy to poke fun at itself. The childhood friend, the boy with a dark past, the contemplative but absent-minded professor… each hits their standard notes, but does so in a way that I didn’t exactly mind treading old ground.

The story can get touching at times, and there’s surprisingly heavy subject material under the colorful surface.

The writing of Hatoful Boyfriend is quite excellent, knowing when to keep things light and when to slowly lay on the emotions. The aesthetic of the game adds beautifully to that, keeping the look simplistic and focused on the birds, who all have distinct portraits and themes to remind you if you’re as bird-blind as I am. While the upbeat tempo of San’s theme provides a perfect background melody to his antics, Nageki’s somber tale is accentuated by slow piano and dim lighting. Little touches make each story feel unique enough to stand alone, yet connected by the overall aesthetic and theme to keep the cohesive narrative together.

Yet through all of this light-hearted, wacky romantic romp, there’s bound to be lingering questions. It’s a little strange that Hiyoko is the only human in this story, and that she was accepted so readily to St. Pigeonation’s. Her “Bad End,” which you receive if you don’t romantically pursue any of the pigeons, also alludes to a secret society that might have a vested interest in Hiyoko becoming involved with the birds of the academy…

The writing is just fantastic.

While Hatoful Boyfriend starts off as a rom-com school-life story, it is the BBL (Bad Boys Love) route that explores the true story behind the world of Hatoful, how each character is intertwined, and what exactly is going on behind-the-scenes at St. Pigeonation’s. It is, again, a standard visual novel trope to have a secret route unlock after clearing enough of the intro routes (in this case, the five “main” romantic interests and the Bad End), but this does so in a way I absolutely adore.

Without spoiling any of the route, it is a fantastic ride that takes a left turn early and might just be the craziest part of the entire Hatoful universe. You’ll walk away with maybe not a latent understanding, but at least a deep appreciation of the thought put into every aspect of the prior routes. Featuring some amazing twists and turns through its runtime, BBL is the True End of Hatoful Boyfriend, and luckily most of the prior routes are short enough that you don’t have to invest too much to get into it.

There’s a lot of different endings to find, adding some replayability and secrets to find.

Hatoful Boyfriend is a fantastic visual novel, but not without fault. A lot of the early choices seem to have importance but end up ultimately inconsequential, especially the extracurricular activities. Unless you are pursuing the best ending with each pigeon, you only have to make a slight effort to pursue a single interest and you’ll easily progress through their route.

Some of the basic functions of Hatoful could have been smoothed out as well. Replaying through early scenes to complete new routes is often time consuming, even with the fast-forward function. I would’ve liked to see a more robust Skip feature, allowing you to either completely skip certain scenes or fast-forward through to only choices, so getting through the early sections didn’t feel like such a chore.

Choices like this seem important, but are really just a “pick whoever’s route you’re on” moment.

Nitpicks aside, Hatoful Boyfriend is a fantastic visual novel for beginners and fans alike, and it provides all the satisfaction of a great universe and story for less than the price of a book at your local bookstore. While it runs well on both PS4 and Vita, I especially recommend it for Vita players on-the-go who are looking to ditch the Kindle and enjoy some quality pigeon-time. Either way, Hatoful Boyfriend is certainly a niche title, but still worth a try for anyone looking for a fantastic, memorable story about love, life, and birdseed.

Hatoful Boyfriend tells an endearingly crazy story that will have you smiling, laughing, crying and feverishly turning the virtual page. It takes some buy-in, but pays off if you're looking for something way off the beaten path.