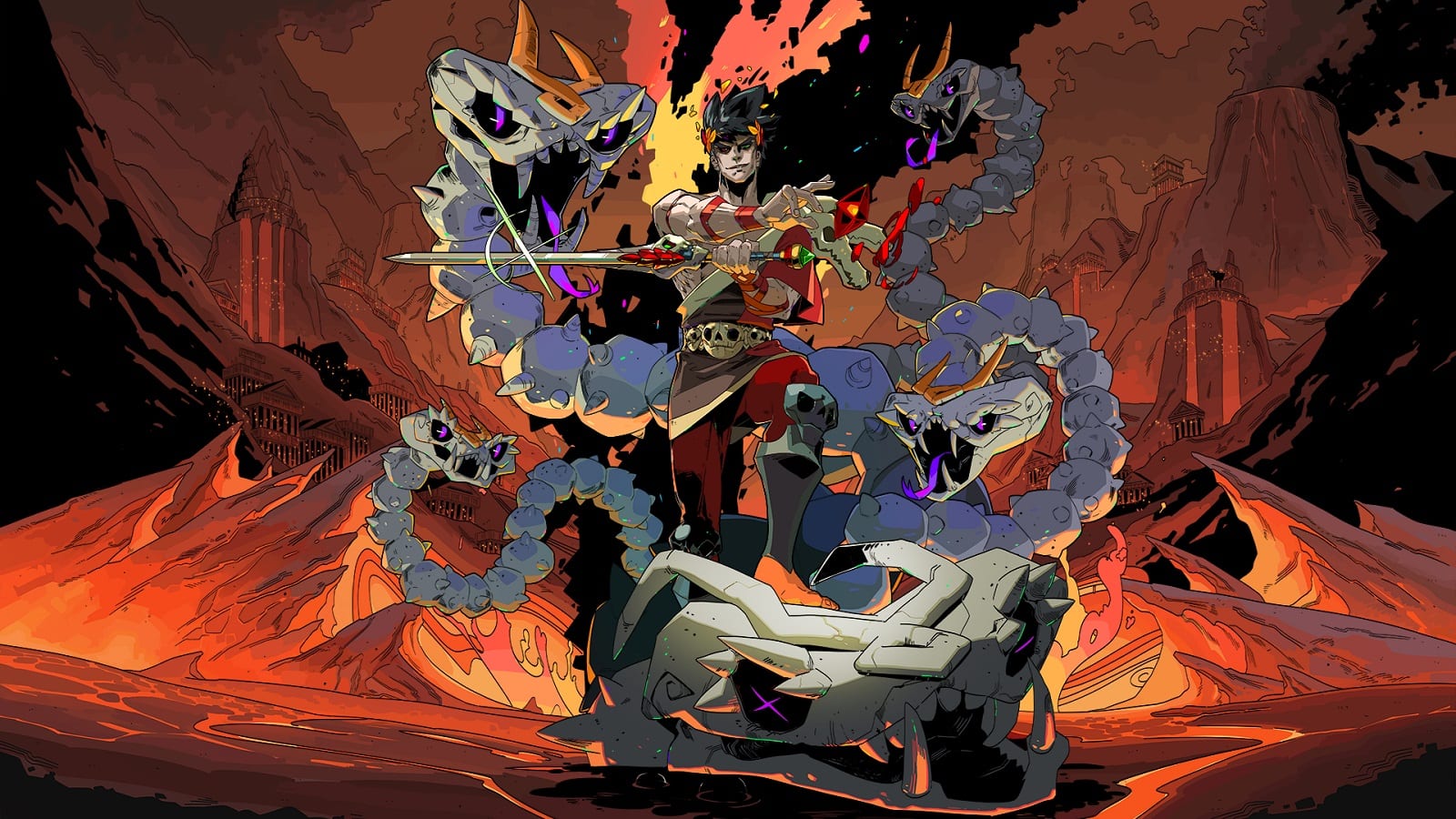 Many have tried to leave the underworld, all have failed. As Prince Zagreus, son of Hades, you’ll get out and die trying, over and over and over. Each attempt will grant you knowledge and strength, but what awaits you on the outside?

Hades is the latest game from Supergiant Games, the folks behind amazing titles like Bastion, Transistor, and Pyre. After the fantasy sports experience that was Pyre, they’ve returned to the isometric action style, with a rogue-like twist. Attempting to leave the underworld will see you climb its ever changing depths, riddled with a myriad of foes and a boss waiting at the end of each section. Starting in Tartarus, you proceed to the fields of Asphodel, now a scorching inferno, then to Elysium and beyond. Then when you die you’re sent back to the House of Hades and do it all over again. While you do lose things like money, boons from Olympians, and progress upon death, you keep everything else to make the next escape attempt easier. Darkness can be consumed at Zag’s mirror to power him up. Gemstones can be spent to make the House just a bit nicer or purchase renovations to help you along your journey. You can give Nectar to the gods or other characters in exchange for special Keepsakes (or just to be nice) – almost everything you collect serves a purpose and facilitates future runs. 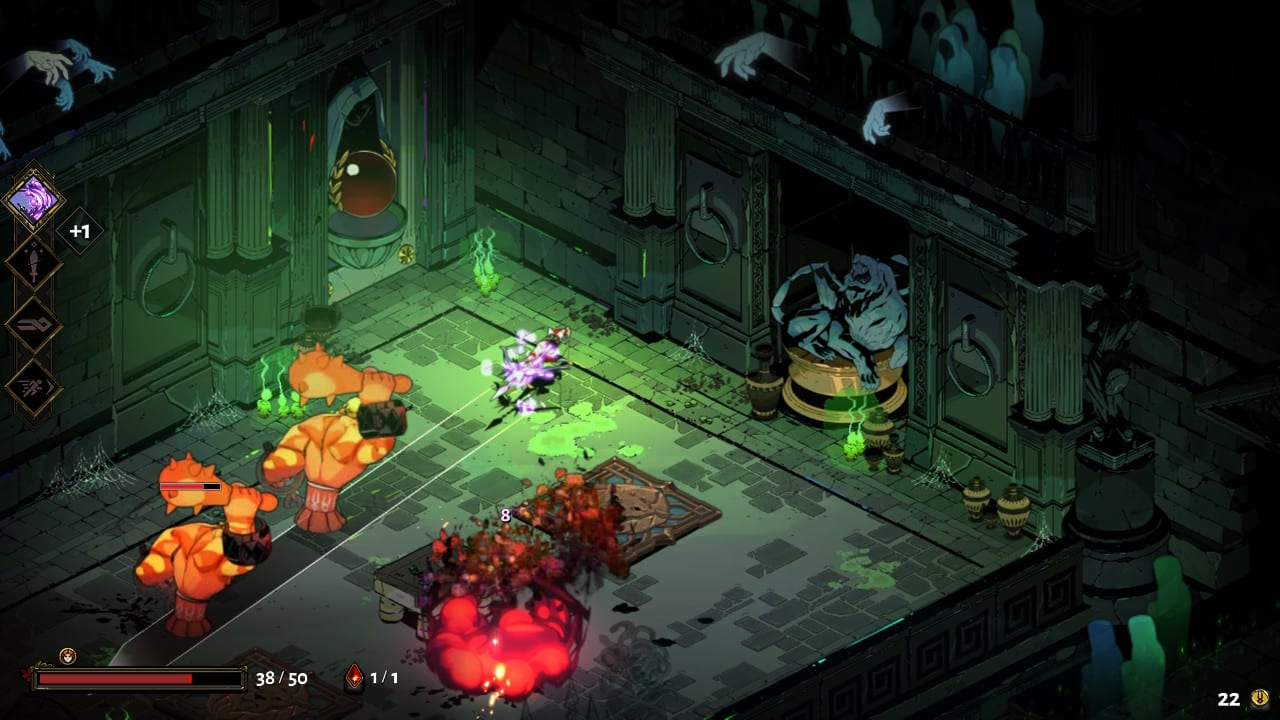 Once you’re prepared and have chosen a weapon, such as a recalling spear or giant fists, you’ll enter the labyrinth that is Tartarus and gain a boon from one of the Olympians. These grant special effects, like having your attack also cause lightning to bounce between enemies or your dash knocking away enemies. Speaking of, Zagreus has a variety of moves at his disposal, depending on what weapon he’s equipped with. Each weapon comes with at least two abilities: a standard attack with Y and a special with X. Outside of weapons, he can also perform a quick dash with the B button and cast a spell with A. While using weapons mostly stays the same, though they can be changed or upgraded using Titans Blood and the Daedalus Hammer, your cast is largely affected by boons. It starts off as a projectile that can be lodged in an enemy for extra damage, but with some help from Aphrodite it can become a short range blast that makes enemies weaker. There are a metric ton of factors that allow you to customize exactly how you want to play, but also makes each run unique as the layout of rooms is randomized in addition to the rewards you get after clearing an encounter.

While there is a ton of stuff to see and do in the underworld, most of your time will be spent in combat. While I felt that Bastion was a bit clunky and Transistor was more of a turn based affair, Hades goes for an entirely action oriented approach and it feels fantastic. Enemy attacks are well telegraphed, with the occasional exception of smaller foes, and the prince can zip around the battlefield, dodging attacks and getting the drop on Shades. Each weapon is fun to use once you figure out their playstyle -I’m not too keen on the Aegis shield and the Adamant Rail – but after a few boons I started to warm up to them.

Supergiant are most well known for their emotional stories and those expecting that may be a little disappointed in Hades. You’re essentially doing a Sisyphus in attempting escape over and over, but it makes up for this in character. Zagreus himself is, thankfully, a highlight. He’s got a ton of quips and spouts them off frequently as you play. Speaking to characters like Achilies and Nyx is always a highlight each time I return to the House of Hades, and as you progress they’ll comment on how you’re doing and how far you’ve made it. This can get a bit weird if you make a bunch of progression in one go. For example I made it to the final boss on my 7th run, after previously only reaching the second area, and hours later Zeus was surprised that I had made it to Elysium. I feel like they should have a queue of some sort as accomplishments relate to dialogue. The sound design in conversations can be odd as well. The game seems to use a system that lowers the volume of other noise like music and sound effects while someone is talking, but it can come back at full volume even when someone shortly pauses in a sentence. It’s a very nice touch in gameplay, but when speaking to someone I think it would be more beneficial if other sounds were lowered for the duration of the dialogue as it can be a bit distracting. 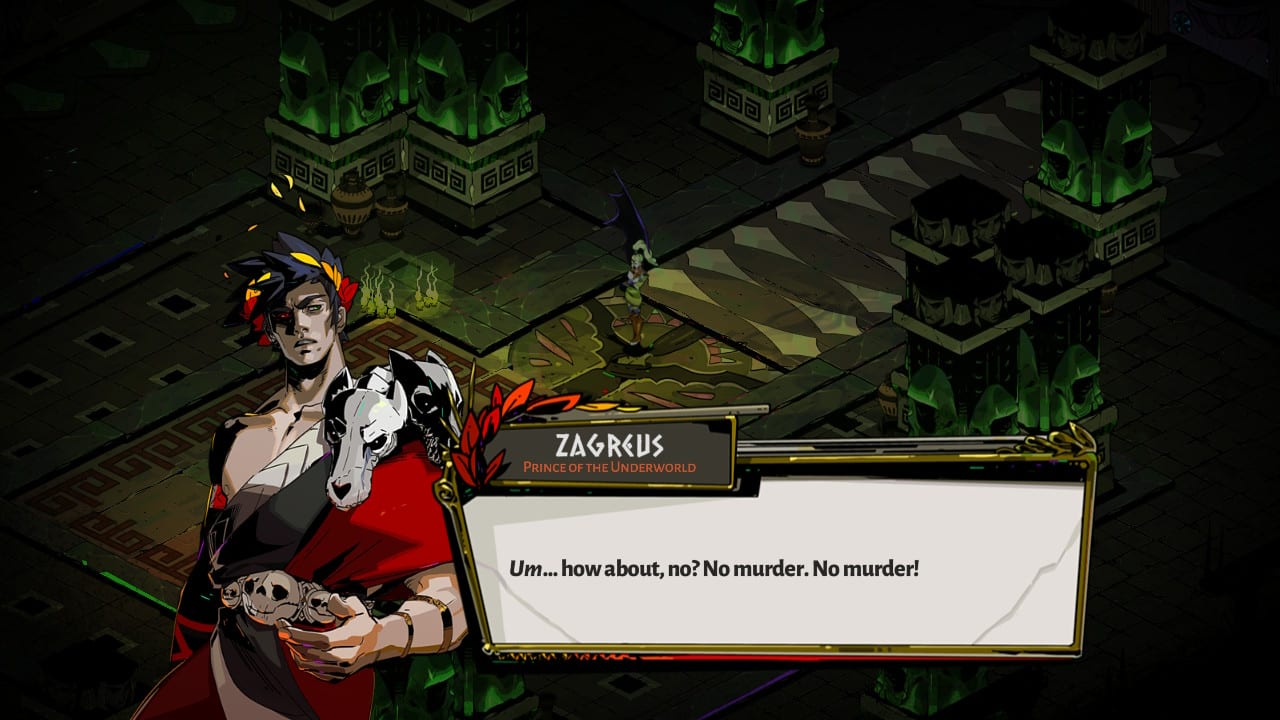 Hades has been in early access on PC for a while now and with its full 1.0 release it also comes to Switch. Rogue-likes are a perfect fit for Switch and Hades is no different. Each run only takes about 40 minutes which makes it great to pick up and play. Performance makes no compromises either. In docked mode it runs in 1080p and mostly stays around 60 fps, only dropping frames when there are a ridiculous number of enemies on screen. I can only assume in portable mode it runs in 720p due to the screen’s resolution, but it’s likewise remarkably stable. The game will also support cross saves at some point, so if you’re already playing on PC it may be worth double dipping for the portability. The only problem I have with this version is that the font is far too small in some places. It doesn’t reach Xenoblade X levels of unreadability, but it is difficult to read no matter what mode you’re playing in.

Supergiant has made another modern classic. Hades offers some of the best rogue-like gameplay out there and delivers a satisfying experience in all aspects. From the wonderfully voiced characters to the fluidity of combat, there’s a lot to love here as you die over and over again.

David is the kind of person to wear his heart on his sleeve. He can find positives in anything, like this is a person who loved Star Fox Zero to death. You’ll see him playing all kinds of games: AAAs, Indies, game jam games, games of all genres, and writing about them! Here. On this website. When not writing or playing games, you can find David making music, games, or enjoying a good book. David’s favorite games include NieR: Automata, Mother 3, and Gravity Rush.
Related Articles: Hades, Indies
Share
Tweet
Share
Submit