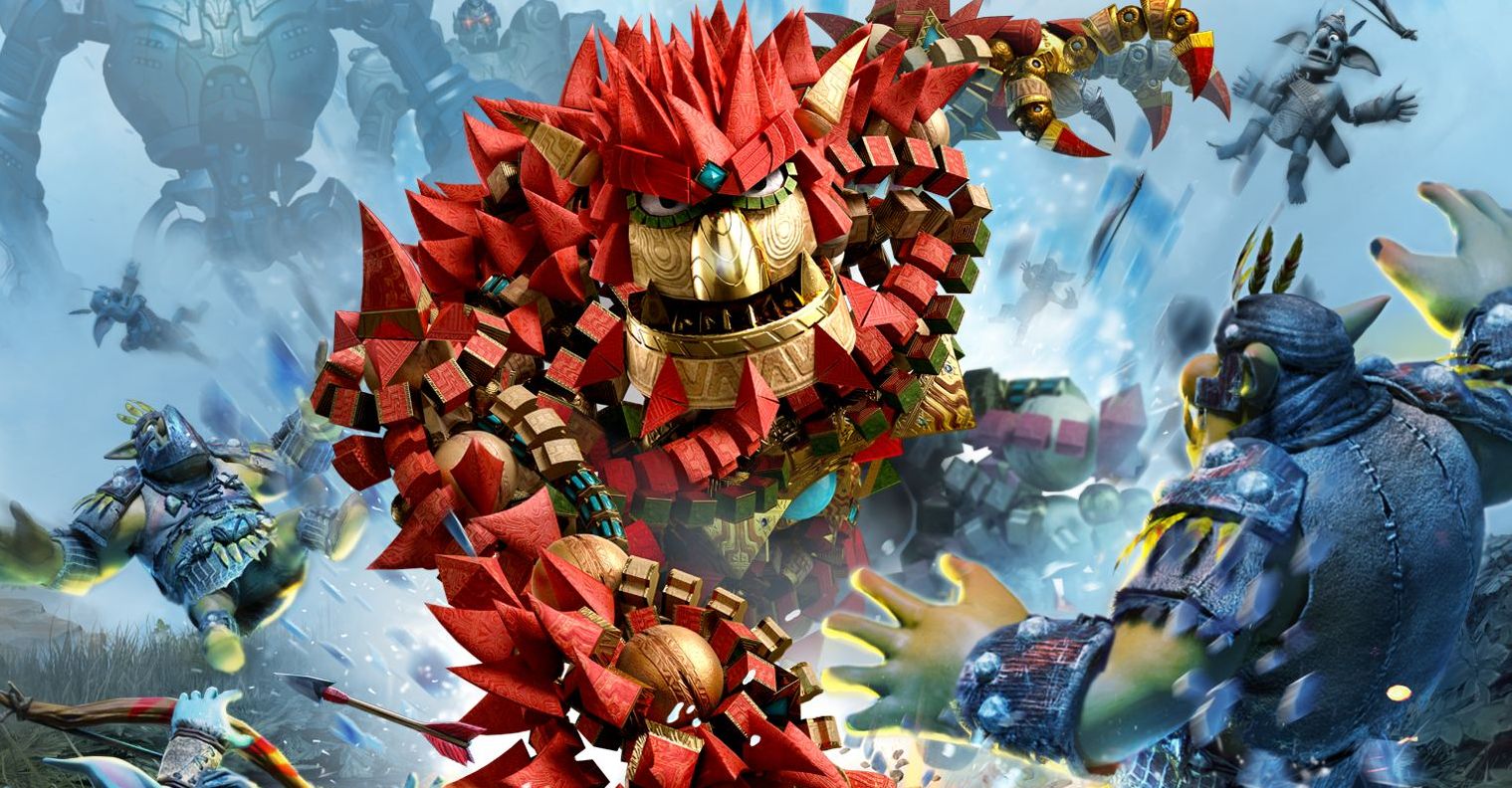 Buried in a landslide of fantastic PlayStation 4 launch titles was a little game called Knack. Mark Cerny, Sony’s long-time lead architect for the PlayStation (and likely responsible for whatever game you like), helmed the title but the little action platformer failed to capture the imagination on the new platform, as you can see in our review from four years ago. Surprisingly, Sony and Mr. Cerny wanted another bite at the apple, and announced Knack II in December of 2016. Could local co-op and a fresh storyline brush away the doldrums of the previous attempts, or will it just be boring for two people instead of one?

If you skipped the first title, or if you need a refresher, Knack is the story of a Katamari-esque titularly-named creature named Knack. Knack can pick up relics that he can use to make himself larger, and can shed them to become small again when needed, with advantages and disadvantages of both being fairly obvious. Where its predecessor used this in a hamfisted manner, it’s one of the cornerstones of Knack II’s strength.

Puzzles and platforming, when combined with a more measured use of Knack’s size-transforming abilities, makes for a far more rich and rewarding experience. Using Knack’s size to smash foes with ease is buffered by moments where shedding Knack’s relics to squeeze through a tiny door comes in handy. Knack II’s approach feels more dynamic than the prescriptive approach of its predecessor.

If the original Knack had a failing, it was that it didn’t have a clear audience. It was marketed as a platformer, but didn’t scratch the itch for fans of Cerny’s previous efforts like Jak and Daxter or Crash Bandicoot. The combat was equally as thin, offering little challenge except for the youngest of players. Knack II remedies this in a number of ways. First and foremost, the game now features more frequently placed checkpoints, which is handy when you tackle the new platforming segments. Similarly, the game now features four difficulty levels from Easy to Very Hard, ensuring an appropriate challenge for all play levels. Additionally, the combat has been improved dramatically, and when combined with drop-in / drop-out cooperative play, it’s a real game changer.

Knack’s combat was woefully dull as the player had access to a paltry three attacks – something the developers make fun of in one of Knack II’s cutscenes. Now, Knack and his tag team partner have two dozen attacks at their disposal. Foes have powers that require specific tactics to counter (e.g. breaking the shield of a foe with a heavy attack), but it never feels unmanageable. Similarly, a spin attack lets you dispatch a large swath of foes, and a body slam is just good clean concussive fun. The team’s work shines best in cooperative play.

It’s very clear that the team spent the last few years studying the way gamers play cooperatively. Left to their own devices, players will often batter their friends in fun and interesting ways, and the team fully embraced that in Knack II. Rather than having the players able to hurt each other, battering your co-op partner results in some fantastic cooperative attacks. You can body slam your friend for a massive explosive attack, kick them into enemies, punch relics off their body which turns them into flying projectiles, and more. It’s a lot of fun, rewarding the natural playstyle of younger (and older, more mischievous) players.

To help assist younger (or less experienced adult) players with the more challenging platforming sections, it’s only necessary for one player to complete a challenge to succeed. The second player, if unable to complete the section themselves, will simply teleport to the other side. It’s handy to reduce frustration while still adding challenge – a good balance.

I’ve focused a lot on the mechanical improvements of Knack II, but if there’s an area where the game feels a little thin it’s the storyline. Cerny’s other titles are often irreverent and funny, if not downright hilarious, but much of that is based on the personality of the characters. Knack as a character is, put simply, boring. He’s a mystical creature made of relics that was brought to life by humans to fight the High Goblins and their robot allies. It’s not much different than the first title (High Goblins instead of the garden variety Goblins), but it’s not gonna win any awards for writing retreading its predecessor.

Beyond the storyline, which clocks in about 12 hours, finishing the game unlocks New Game+, allowing you to keep the variety of upgrades and attack moves you’ve earned in the campaign. Additionally, it unlocks a time attack mode, as well as a level select to go back and tackle anything you might have missed, or try a section either solo or with a friend.

On the PlayStation 4, Knack 2 runs at a minimum of 30fps at 1080p. You can lock the framerate to 30 with an option toggle, but I never felt the need as I never saw a slowdown of any kind, even with two giant Knacks running around in co-op. It’s also optimized for PlayStation 4 Pro, bumping up to 60fps at 4K resolution. The bright candy-colored landscapes and characters pop off the screen nicely on the Pro, and it’s clear they spent the additional time to take advantage of Sony’s flagship hardware.

While Knack remains an uninspired protagonist, Knack II’s gameplay more than makes up for his bland character. Vast improvements in combat, visual fidelity, platforming, and the addition of cooperative play realize much of the potential the original Knack was meant to achieve. Knack II is a fine example of how a sequel can improve on its predecessor in nearly every way.

Ron Burke is the Editor in Chief for Gaming Trend. Currently living in Fort Worth, Texas, Ron is an old-school gamer who enjoys CRPGs, action/adventure, platformers, music games, and has recently gotten into tabletop gaming. Ron is also a fourth degree black belt, with a Master's rank in Matsumura Seito Shōrin-ryū, Moo Duk Kwan Tang Soo Do, Universal Tang Soo Do Alliance, and International Tang Soo Do Federation. He also holds ranks in several other styles in his search to be a well-rounded fighter. Ron has been married to Gaming Trend Editor, Laura Burke, for 21 years. They have three dogs - Pazuzu (Irish Terrier), Atë, and Calliope (both Australian Kelpie/Pit Bull mixes).
Related Articles: Knack II
Share
Tweet
Share
Submit