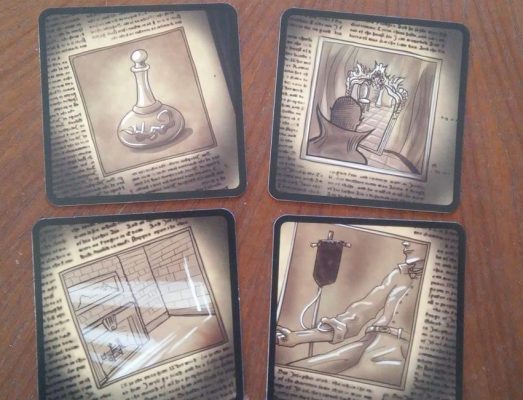 The work of many nights has proven a link between the madman Renfield and the mysterious deaths that have been haunting the streets of late. Just as you are upon him, you discover a truth that leads to an even more frightful mystery: the true killer is a vampire of old, and he is among your number. Nosferatu tasks the players, a group of vampire hunters, with rooting out which one of them is the dreaded creature in disguise. Renfield, the vampire’s thrall, oversees events and facilitates his master’s goals as you race against the clock to find a creature that is hunting you back all the while.

These cards are instantly recognizable, if not iconic.

Each of the cards are square shaped, which make them awkward to hold but showcase the art better than a rectangular card would. The art itself is not exactly revolutionary, but it’s not meant to be. They make use of tried and true vampiric iconography to make each card instantly recognizable. You find yourself appreciating this more and more as the game goes on when you see how much it speeds up the game when everyone can instantly recognize a card’s role.

Nosferatu’s rules are simple and straightforward, which is a good sign because of how vulnerable the rulesheet is to degrade. It is a single double-sided sheet that you will need to fold and unfold multiple times to get into the small game box. However, once someone gets their head around the rules, you should not have to refer to them again.

See? This isn’t bad exactly but it is starting to wear, and each time you open it up and close it will be closer to the end.

The mechanisms in Nosferatu are simple but deceptively deep. Like any social deduction game they are based around providing players with mounting, uncertain information, but these mechanics are integrated deeply into the skills of the players, especially the vampire itself. Nosferatu has to play a careful game, choosing when to hide and when to strike while slowly turning the tide in his favor.

During play, the player cast as Renfield will act as a sort of arbiter, setting the stage but doing his best to work with the vampire to undermine the work of the hunters. He begins by deciding which players will be hunters and which will take the role of Nosferatu. Every other player will be a hunter. Immediately the game starts by creating a dynamic of paranoia and adversity as Renfield sets the stage. Then, each other player draws two cards and Renfield creates the game’s clock, a random assortment of one day card and night cards equal to the number of players.

Play is simple in Nosferatu: each player goes around playing a single card into a stack in front of Renfield and discarding the other card face up in the discard pile. Be ready to explain your discard to the other players, because paranoia will mount immediately if you have to get rid of something valuable. After each player’s turn they turn over a card from the clock stack; if they draw a night card play continues but the round is over if they reveal the day card. At the end of the round Renfield shuffles the stack of played cards and reveals them. At any time on the hunter’s turn they can flip over another player’s role card to stake them in the heart. If the revealed card is a hunter, the hunters lose the game, but otherwise they will win.

There are four types of cards that may go into the stack, each with different effects. Newspapers accomplish nothing, but because they can disrupt rituals, playing them is suspicious, as is throwing away incantations. Incantations are valuable, and a stack with only incantations successfully casts a powerful ritual. Bite cards, which would only be played by Nosferatu, remove a card from a hunter’s hand at Renfield’s choice, essentially forcing that player to play the remaining card in their hand the next round. If the vampire successfully plays five bite cards, he wins the game. Finally, night cards successfully played will go into the clock stack and extend the amount of time it will likely take to end each round.

The way the clock works is a “make it or break it” feature of Nosferatu for most players. Because it is randomized every round, time can run out after any turn. It could be the first turn, the last one or somewhere in between. This dynamic puts great pressure on the vampire, who needs to weigh his decisions carefully because of a threat of a new day. If the vampire starts the round as the first player and plays a bite card, he or she would be revealed instantly. At the same time, vampires have goals they need to accomplish during the game. The timing makes them want to place cards down only when there is a large enough mixture of people to cast more suspicion on more hunters. It’s for this reason that Nosferatu works best at high player counts. With smaller player counts, the vampire is more likely to be a part of every round, which gives him little to do but disrupt the hunters’ plans. Neither party ends up feeling like they can really get the most out of the game unless you are playing with seven or eight players.

Incantations are crucial: if they are the only cards revealed, the hunters cast one of their five rituals, which have special abilities. If the hunters can successfully play all five rituals, they win the game. One of the rituals eliminates a night card from the clock, two give of the rituals a player an extra card in hand, one forces a player to reveal their hand, and one has Renfield reveal a player’s role card of his choice. These effects accomplish little on their own, unfortunately on the game other than to raise the stakes for Nosferatu, which leads to the game’s only noticeable problem.

Notice the way these rituals are depicted. They have an air of mystery and suspense that is completely appropriate for ritualistic magic.

While Renfield and the vampire have interesting decisions to make throughout the playtime, the hunters are led with a much more straightforward experience. They are more passive, trying to gain information slowly over time. The rituals add a pressure on the vampire and give the players more points around which to strategize, but the role of hunter is mostly about paying attention and gauging the psychology of Renfield. Renfield chooses who begins each round, so there is some fun to this interplay as you attempt to decide what his game is, whether to deflect suspicion away from his partner or not. There is also little risk apart from necessity, i.e. a bad draw, to make you think any hunter is at fault, putting most of the game in the hands of Renfield and Nosferatu.

Because of the power and information both sides will be accumulating as they play, tension is constantly mounting even over the short playtime, which ends up around fifteen to twenty minutes. You begin with methodical logic and willing to take more risks, but by the end of the game, each turn of the clock is threatening to one side or the other. Like any good horror story, Nosferatu starts slow and ends with a wild rush until finally the experience is over.

Nosferatu is a game of cat and mouse which gives the villains a bit more to do, but their role is one of careful deception and strategy. You never stop feeling the theme of a group slowly turning on itself to find the weak link even as it works to take everyone down.

John Farrell is a legal aid attorney specializing in domestic violence, living in West Chester Pennsylvania. You can listen to him travel the weird west as Carrie A. Nation in the Joker's Wild podcast at: https://jokerswildpodcast.weebly.com/
Related Articles: Nosferatu, Tabletop
Share
Tweet
Share
Submit