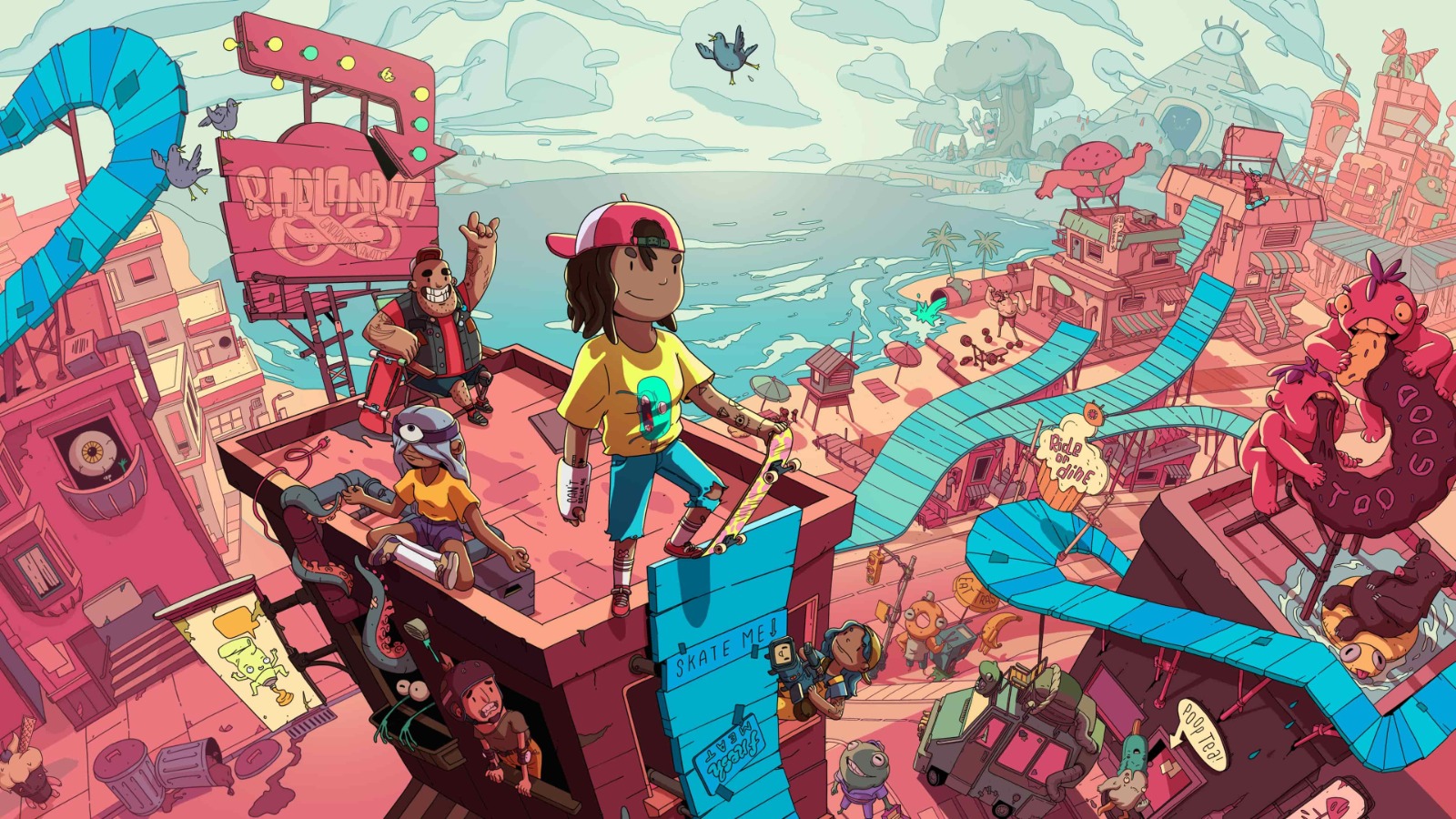 When I first jumped into OlliOlli World, I was only vaguely familiar with the games that came before it. I knew that up to this point the OlliOlli series was made up of two 2d skateboarding games that featured pixel graphics, a decent challenge, and a lot of room to pull off tricks, combos, grinds, and so on. I also knew they were widely lauded and held in high regard from fans and critics alike, amassing somewhat of a cult following.

Given that, I should preface this review by clearly stating that I am a newcomer to the series, although I have played my fair share of skateboarding games in the past. Tony Hawk’s Underground and Tony Hawk’s Underground 2 were family favorites growing up, as was Tony Hawk’s Pro Skater 3, which ended up being my introduction to both skateboarding games and Motörhead alike. Before playing OlliOlli World, I had forgotten how much I loved those games growing up, and while OlliOlli World plays completely differently, I’m pleased to say I had a ton of fun with it, and it reminded me of how much enjoyment I used to get from skateboarding games.

OlliOlli World takes place in the land of Radlandia, a vibrant, colourful world shaped by the Gods for one purpose and one purpose only: to skate. Once in a generation, a skateboarder is chosen to go on a pilgrimage around the world to prove themselves to the Gods, and in doing so, essentially becomes Radlandia’s skateboarding messiah. That person this time around is you.
There’s a brief introductory cutscene to contextualize this, but if I’m being honest, I found it to be a little cringy. A world dedicated entirely to skateboarding is a fun idea, but the whole chosen one/skateboarding pantheon angle was too over the top of my personal tastes.

The same can be extended to the characters who accompany you on the journey; they talk a whole lot of nonsense that just didn’t land for me. An array of characters follow you around Radlandia to cheer you on and perform the role of tour guide for the dozens of levels you will skate through. Each level is bookended with bits of dialogue, and I found this to be a bit of a nuisance after just a few levels. Thankfully, the dialogue before the level can be skipped, but you have to read, or in my case, click through the dialogue at the end of each level. While I appreciate the lengths that the developers went to to breathe life into the world, I personally just wanted to get on with clearing the fantastic levels they had put together. Perhaps an ‘arcade mode’ or ‘story mode’ could be introduced to allow those not too bothered about character or story to skip it. 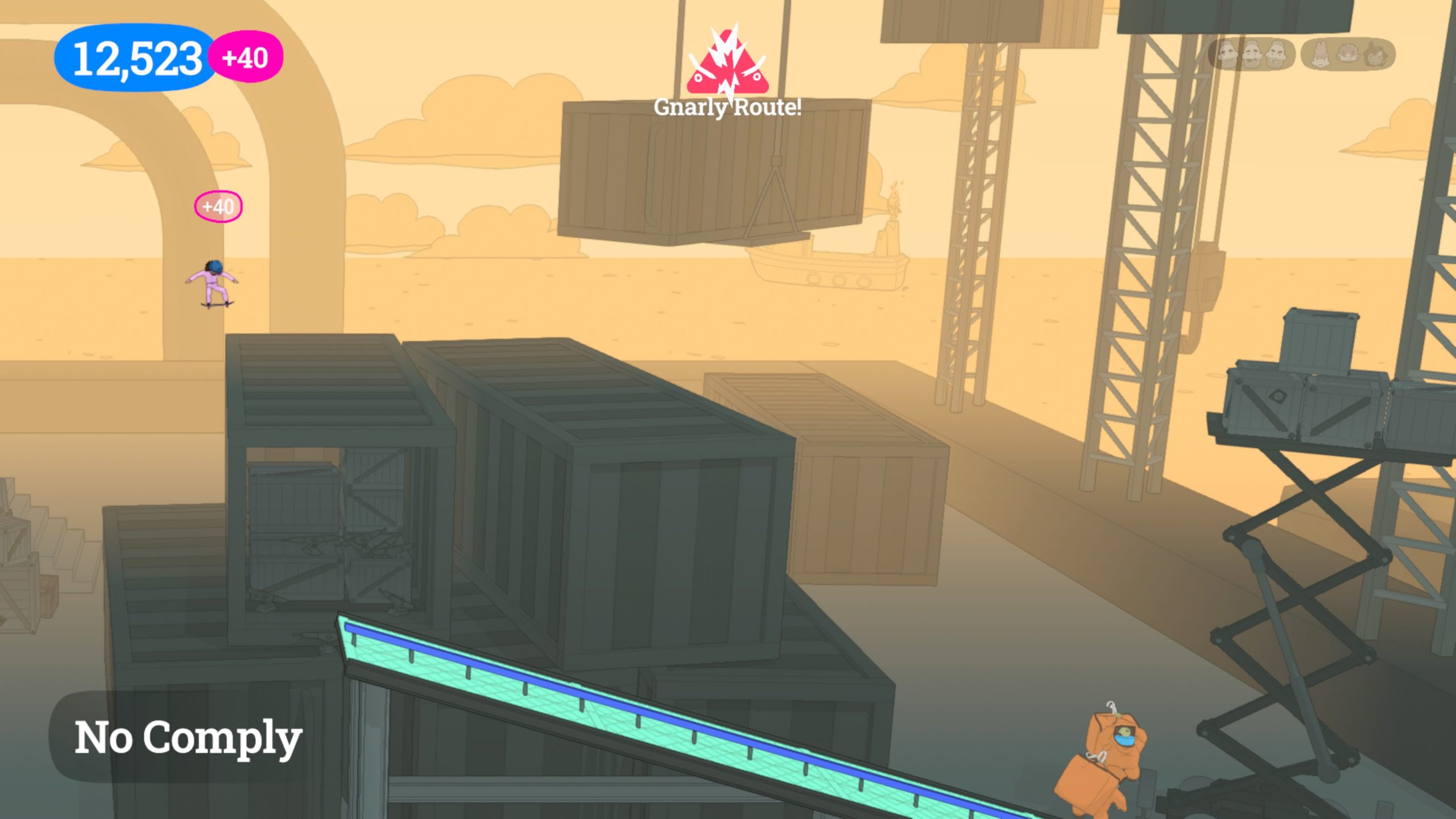 While I’m being critical here, I do understand that I’m not the target audience for this, and I realise that a lot of the pun-rich dialogue and skateboarding euphemisms are included as a celebration of a skateboarding culture that I’m fairly ignorant of. With that out of the way, I adored practically everything else OlliOlli World had to offer.

After the aforementioned cutscene, you are dropped straight into the character creation screen where you are warmly welcomed with a plethora of customization options. There’s a gargantuan amount to choose from here, with options for face, hairstyles, tops, bottoms, boards, wheels, accessories, and much more. The apparel is the star of the show here, with a wealth of wild, colourful, and quirky outfits to mix and match. You can return to this screen for a switch up at any point during the game, and you’ll unlock a ton of new options as you progress through the campaign and complete challenges. 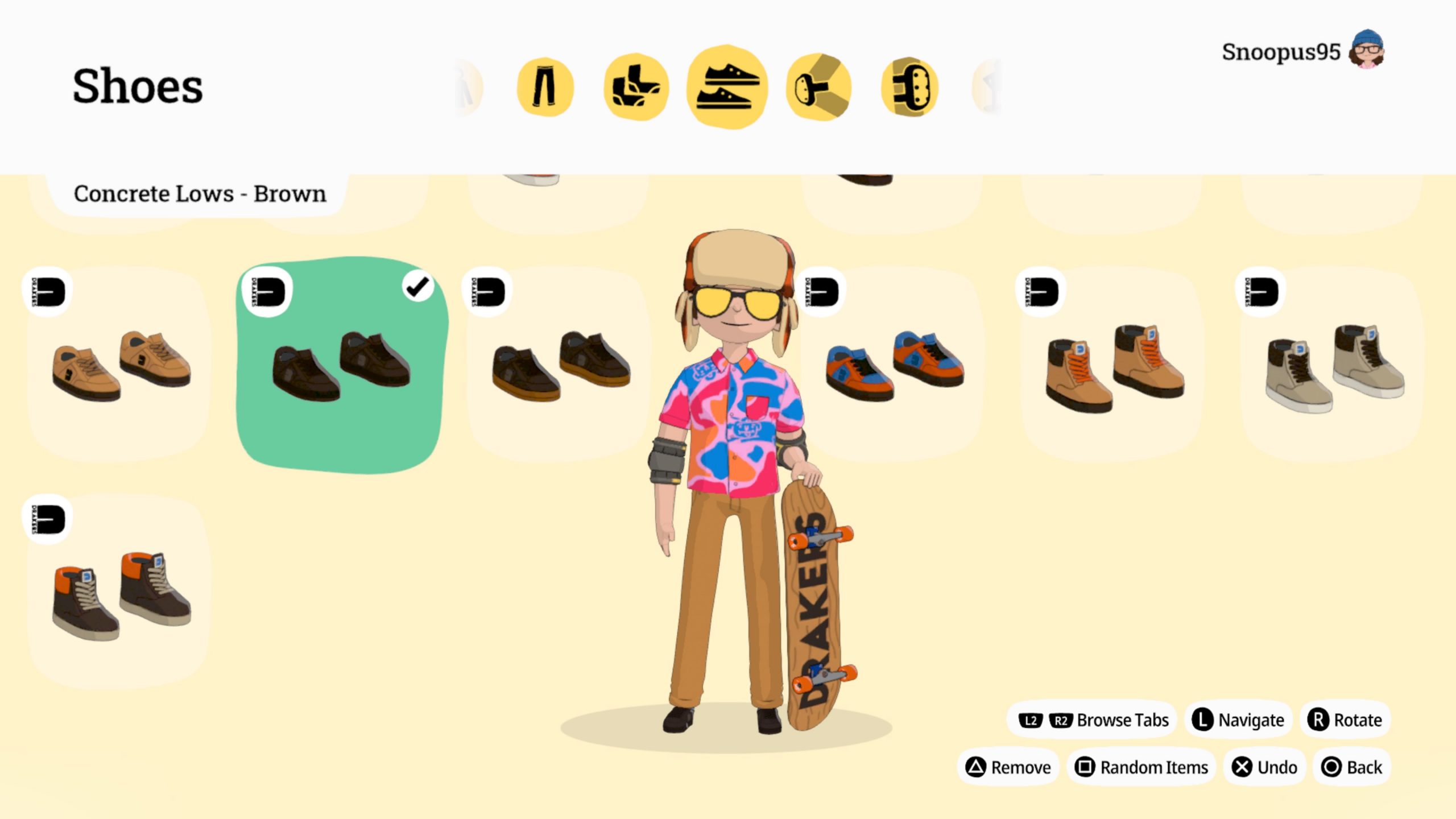 You’ll spend the first few levels familiarising yourself with the fundamental mechanics of the game. This was an entirely new process for me, and while I’ve never played the previous entries before, I understand that the basic tricks and controls in OlliOlli World are not too dissimilar from those that came before. You control speed by tapping ‘X’, and perform jumps, tricks, and grinds by using the left and right sticks. It’s a wonderfully simple control scheme that’s easy to learn but hard to master, especially when you are pushing for higher scores. In a game that moves as fast as OlliOlli World, it’s essential that the right decisions are made in both the design and implementation of the controls, and Roll7 knocked it out of the (skate) park there.

As you progress through the game, you’ll be constantly drip-fed new mechanics to master and new hazards to avoid. OlliOlli World packs a lot into its levels, including wall grinds, crystals that can only be broken with grab tricks, half-pipes, and much more. Things start out rather easy, but the difficulty curve ramps up quite nicely as you approach the latter levels of the game. Before long, you’ll be going from a rail grind into three consecutive wall grinds before smashing through crystals that lead to another rail, and so on. The levels are very well constructed, seemingly weaving together gameplay elements to make you feel like a total badass when you overcome them. While it might take you several tries to finish, it never feels too unforgiving due to well-placed checkpoints that can be instantly returned upon failure. My ability to instantaneously reattempt tricky bits really gave me that ‘one more go’ feeling.

On that note, I appreciated Roll7’s approach to difficulty, as it organically allows the player to pick a difficulty that best suits them. All you need to do to move onto the next level is to make it to the finish line, and while this can still be challenging sometimes, it means that most players won’t have too much of an issue seeing the credits roll. However, each level has a number of unique challenges attached to it, in addition to an equivalent of bronze, silver, and gold scores. This allows perfectionists and completionists to set their own goals, and there are a ton of cosmetic rewards for those who commit to taking on the extra challenge. You can also compete against your friend’s and other player’s high scores, and even watch a replay of their best runs to give you an idea of what you’re up against. 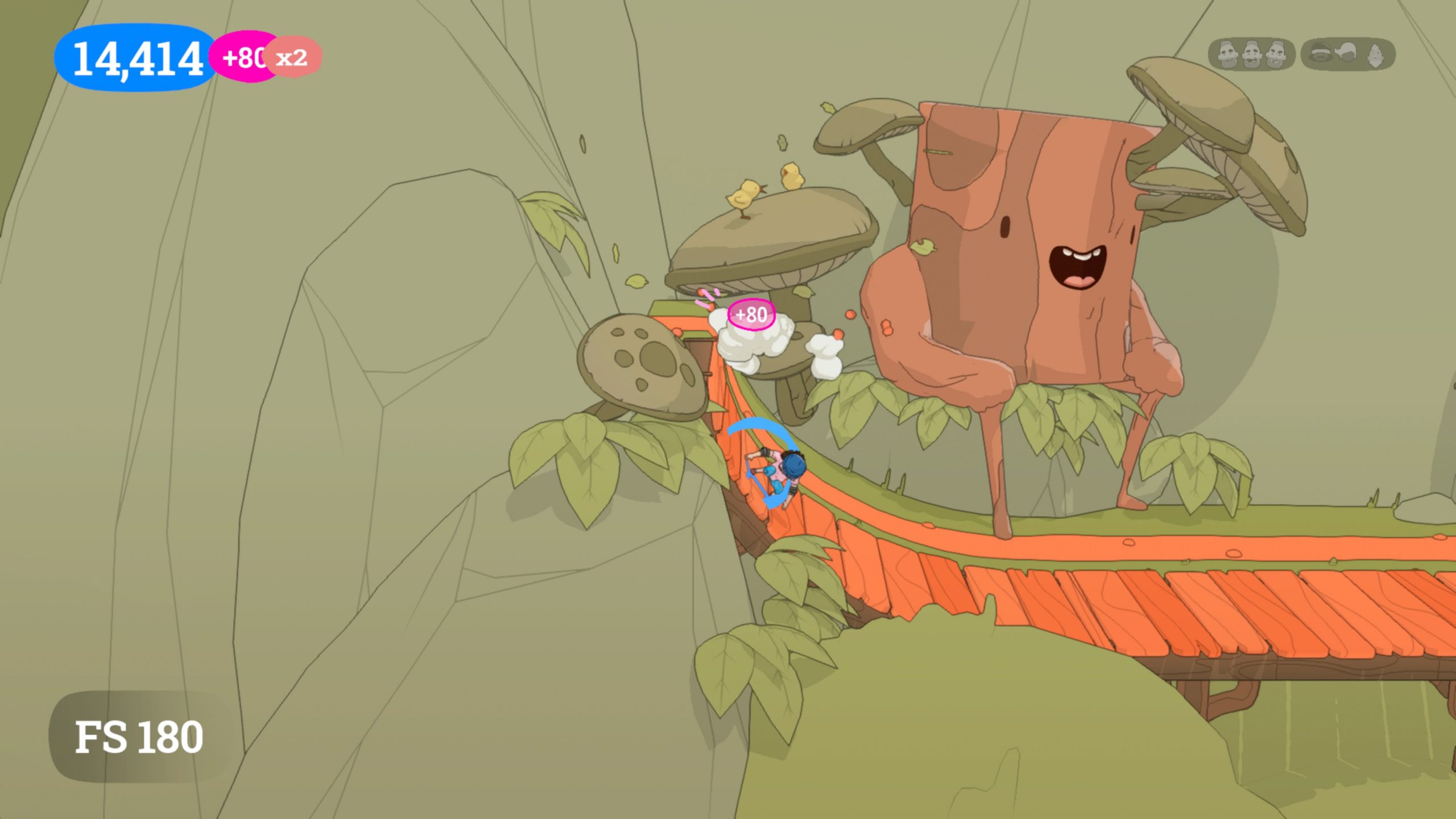 Another area where OlliOlli World shines – and one that took me by surprise – is the amount of exploration baked into the vast majority of levels. Around a quarter of the way through the game, levels will start to contain branching paths, allowing you to choose a route through the level. Taking one path might mean you miss certain challenge requirements, or even side-quest unlocks, and some levels have multiple areas where paths split. This clever design encourages players to replay levels to see what they’ve missed, and also gives them the opportunity to make snap decisions as they approach a fork in the track. Often, the two routes will weave in and out of each other, giving you a hint of what you could have had should you have chosen differently. On more than a few occasions, I immediately restarted the level to check out an alternate route to alleviate myself of any FOMO.

Now while I may have criticised the worldbuilding and writing of OlliOlli World earlier in my review, the presentation of this world is outstanding. The previous games were fairly basic in the presentation, but Roll7 have really upped their efforts here. Each of the five diverse regions of Radlandia are diverse and colourful, home to weird and wonderful sights alike. I particularly enjoyed the second region, a vibrant woodland with friendly trees roaming around in the background and bees holding up signs that read ‘Save the bees’ and ‘Honey, not money’. The varied locales are all hand-drawn and are presented in a unique style, somewhere between saturday morning cartoons and the psychedelic. It also helps that your skating is accompanied by a chill low-fi soundtrack that really helps bring the visuals and ambience together. 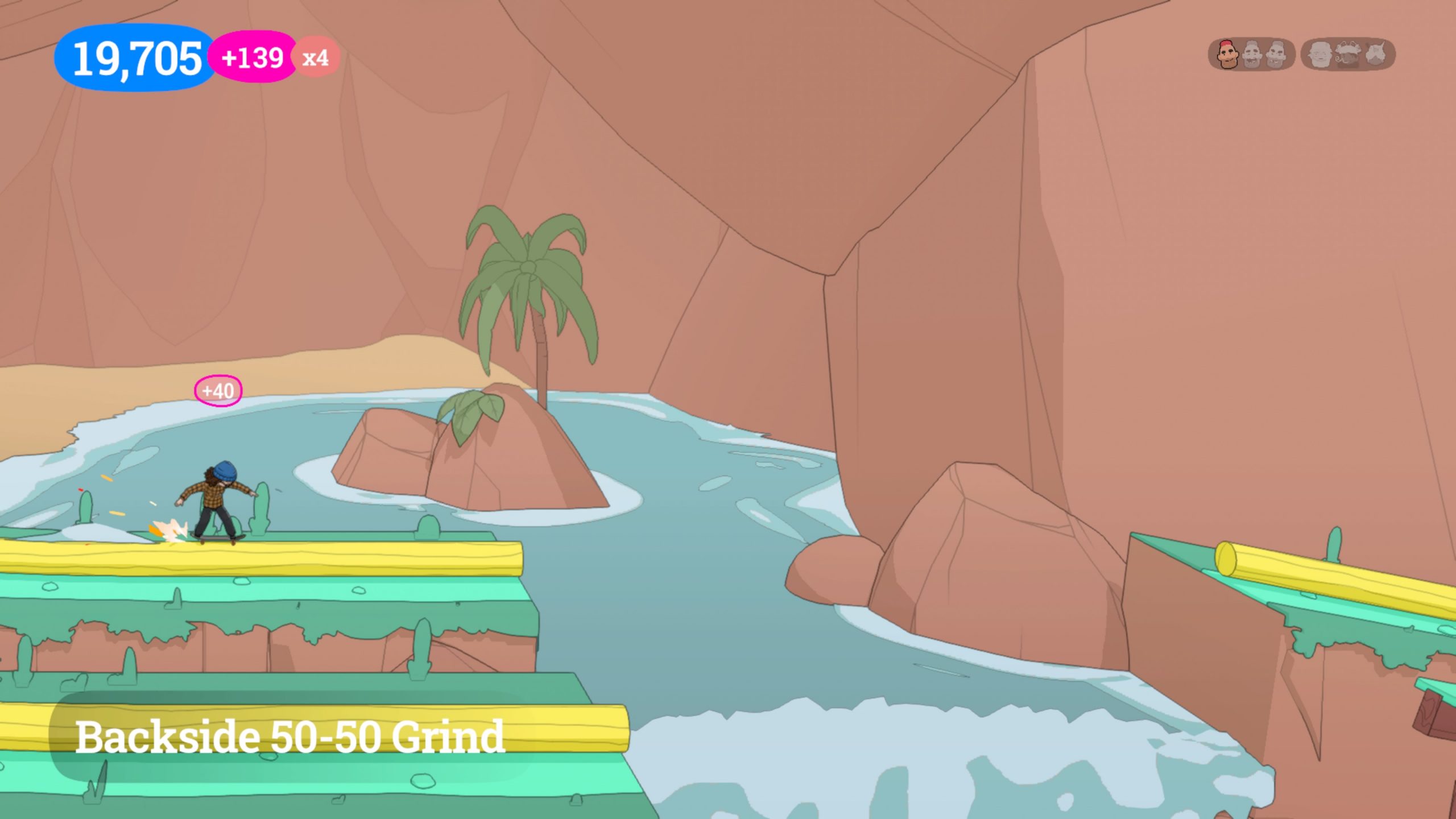 Once you’ve travelled through this colourful land and beaten the final level, there is still plenty for you to do. For a start, you can go back and finish any challenges you did not complete on your first run, which will likely add many hours to your overall playtime. Furthermore, each region has its own mastery to progress through. These aren’t particularly exciting; most just require you to perform a certain amount of a specific trick in that region, but they do give completionists something to aim for. There are also seasonal ladders to compete in for time-sensitive cosmetic rewards, as well as a procedural generation mode that boasts endless playability, even allowing you to share unique tracks with your friends via a postcode. While the social features aren’t particularly extensive, it’s nice that they’re there and will undoubtedly promote some healthy competition for those who want to continue playing the game for years to come.

While I wish there was a ‘Story Mode’ toggle of some kind, OlliOlli World’s writing didn’t distract me too much from an otherwise fantastic skateboarding game. The levels are beautifully presented, well designed, and diverse, while Roll7’s approach to difficulty makes the game easy to learn but tough to master. There’s plenty to see and do in OlliOlli World, and with some tough challenges and neat social features, OlliOlli enthusiasts will be playing this one for a long time to come

Kristian (or Kris for short) is a copywriter by day, button presser by night. Based in the UK, Kris loves any game that allows him to swing a sword, fire an arrow, or sling a ball of fire, but ultimately he's not too fussy. On the rare occasion Kris isn't writing or gaming, you'll probably find him in the bath with a good book.
Related Articles: OlliOlli World
Share
Tweet
Share
Submit