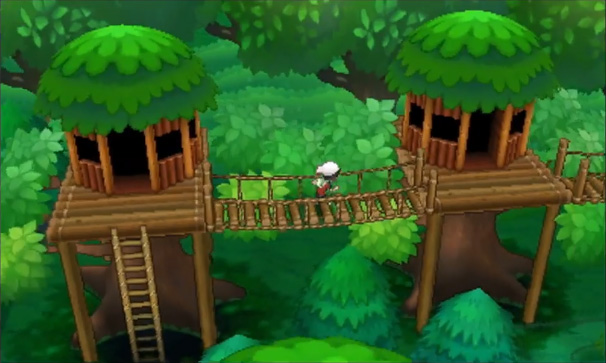 Nintendo has long held down the fort by re-envisioning their catalogue of titles. A company with a long history in gaming, Nintendo’s characters and IPs are the symbols of a generation. Remastering has often led to critical success for Nintendo; games like The Legend of Zelda: A Link Between Worlds and New Super Mario Bros. are fantastic because of the history associated with them. Pokemon Omega Ruby & Alpha Sapphire, however, might not garner that same feeling of nostalgic bliss.

Cities like Fortree have really benefitted from the graphical overhaul.

First impressions of the game are very solid, as the graphic overhaul of the game is frankly beautiful. The world of Ruby & Sapphire transfers well to the X & Y aesthetic, and there are some nice touches added in the form of cutscenes for main storyline moments.

The change from original, overhead 2D to X & Y’s 3D seemed like it would be a big jump, but the overworld and layout stays largely the same, and is even more impressive because of it. Colors are vibrant, old areas are refreshing, and all the Pokemon look fantastic in their overhauled 3D versions.

The 3D battles are a big change from the original’s style, but are nothing new to those who’ve played X & Y.

The sense of wonder fades quickly, though, as soon you’re reminded that this is the same game you played years ago. Pokemon games already fall prey to repetitive gameplay, but keep the gameplay fresh with new monsters, items and abilities. Omega Ruby & Alpha Sapphire lacks any of these, and instead imports old features into an older game.

New to this version of Pokemon is the DexNav, an extension of your PokeNav that identifies local Pokemon in the area and can spot special Pokemon, who you’ll need to sneak up on to catch. This is nice for keeping track of which Pokemon you’ve captured in an area, and the special Pokemon you catch will have an extra ability or be of a higher level than the area standard, but it all serves as a distraction more than a compulsion.

Mega Evolutions also make an appearance, with ten Pokemon receiving Mega forms to use. Like most Mega Evolutions, they’re visually impressive and fun to use, but end up feeling more like fan service than any sort of strategic option.

Small cutscenes add new life to the story and a new perspective to events.

The story of Ruby and Sapphire is here in regular Pokemon form, and pretty much the same as before. You take on the role of a male or female trainer, with the opposite gender playing your friend/rival (I prefer “frenemy trainer”). Meet the professor, pick a starter, start off down the road and beat up this game’s equivalent of Ratata and Pidgey.

Eventually, the game picks up beyond the typical gym progression and Team Aqua (or Magma) antics. The real storyline pull for this game, however, is the Delta Episode, which allows you to travel in time to discover the source of Mega Evolutions and capture some historic legendaries. This new piece of content feels like a fleshed-out DLC, but is very strong, and is the biggest pull for longtime Pokemon fans.

Also added back in are customizable Secret Bases, a feature left out since Platinum. You can set up little mini-gyms and allow friends to visit them, in an eerily-similar fashion to Animal Crossing. There’s also Cosplay Pikachu, which frankly, I don’t have words for. There’s a Pikachu. It can change outfits to use different abilities. There’s a luchador PIkachu called Pikachu Libre. If that appeals to you, it’s there.

Yeah, I wasn’t kidding about the Cosplay Pikachu. Pokemon Contests just got nuts.

It’s a great package, and if you’re someone who missed Ruby & Sapphire the first time around, this is a great entry to the series. For those adamant followers of the series, or even those who have played Ruby & Sapphire, you have to question whether the graphical update and extra features are worth the price of admission. There’s some new content and some nice changes, but there’s no new monsters outside of Mega Evolutions (and the Primal Reversions, which are Mega Evolutions for Groudon and Kyogre).

Omega Ruby and Alpha Sapphire is a good remake, but new features and graphical updates make it a hard sell for those who have already invested many hours in the originals.