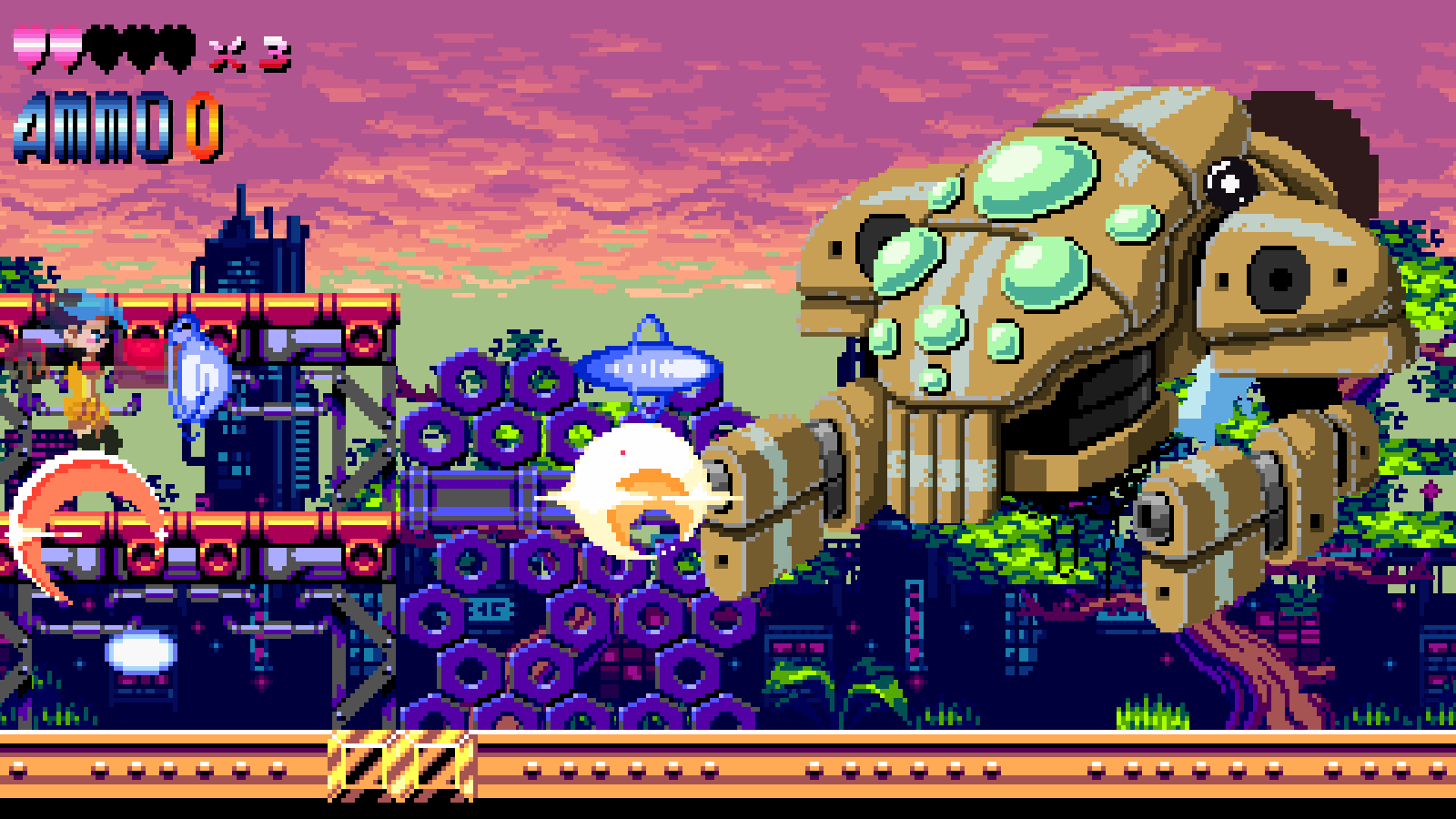 With all the talk of graphics and resolution, gamers often forget what it was like when a games’ visuals weren’t the most appealing, and gamers had to use their imagination to visualize the world that game designers created – and that’s not a bad thing. Gun Crazy is a pixel-art style, fast paced, action pack, side-scrolling shooter where you run n’ gun your way through stages packed with enemies and big bosses that push you to use your advanced hand-eye coordination and quick reflexes.

Like many games of the 80’s and 90’s, Gun Crazy opts to keep its control schemes simple and to the point: shooting, jumping, double jumping, and dashing are all that’s needed to move through the chaotic stages and somewhat randomized enemies. Its pixelated style is colorful and gives life to a world where objects were created to be obscure and simple. Where Gun Crazy separates itself from other neo-old school style games is how the levels progress forward. Though built from the ground up to be a side-scrolling shooter, many levels will have you travelling vertically, fighting hordes of enemies that constantly fire a barrage of colorful beams and bullets at you, or have you riding on top of your cop car, jumping and dashing to avoid incoming attacks, all while the car stays beneath you. 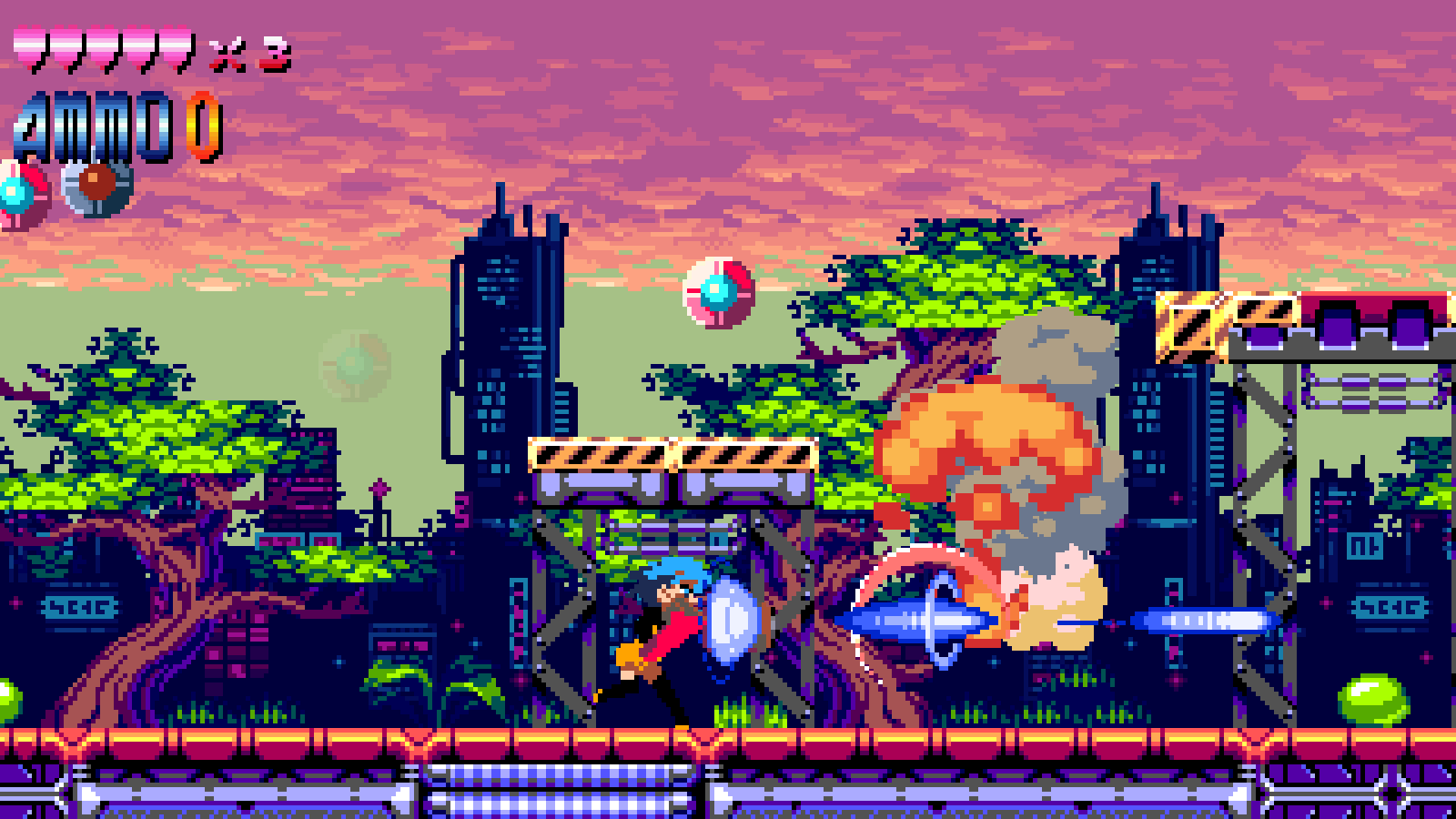 Jumping into the first level, the game immediately felt like a classic side-scrolling shooter, with its enemies that would appear in front of me as I pressed forward and took advantage of the multi-tiered level design that would allow me to jump and dash around enemies to give me an advantage. Though the character’s name is never given, it appears as if she’s a Mega-Man like cop with a massive hand canon: and like all side-scrolling shooters such as Mega-Man, the more enemies I killed and objects in the level I destroyed, the more health and ammo types I found. Collecting the ammo types immediately changed the type of bullets I could fire, but they are limited depending on the type: lasers are powerful, but quickly diminish, whereas the tri-shot and large bullet types gave me more ammo to use. Though it would have been nice to be able to switch between the standard gun and your special, we can’t always get what we want – but in 2020, these are things that should be incorporated.

As I blasted my way through the first level, defeating the random enemies that appeared, I was greeted and treated by what defined most pixel-art style, side-scrolling games in the late 80’s: the big boss battles. The first boss battle appeared at the middle of the level, giving me a taste of what was to come. Firing laser blasts and a plethora of pellet-like bullets, this challenged my timing and hand-eye coordination and forced me to utilize all of the jumping, double-jumping, and dashing mechanics of my hero. Firing and trying to stay alive, I was able to beat the boss with ease – and unfortunately, that’s one of the problems with the game. 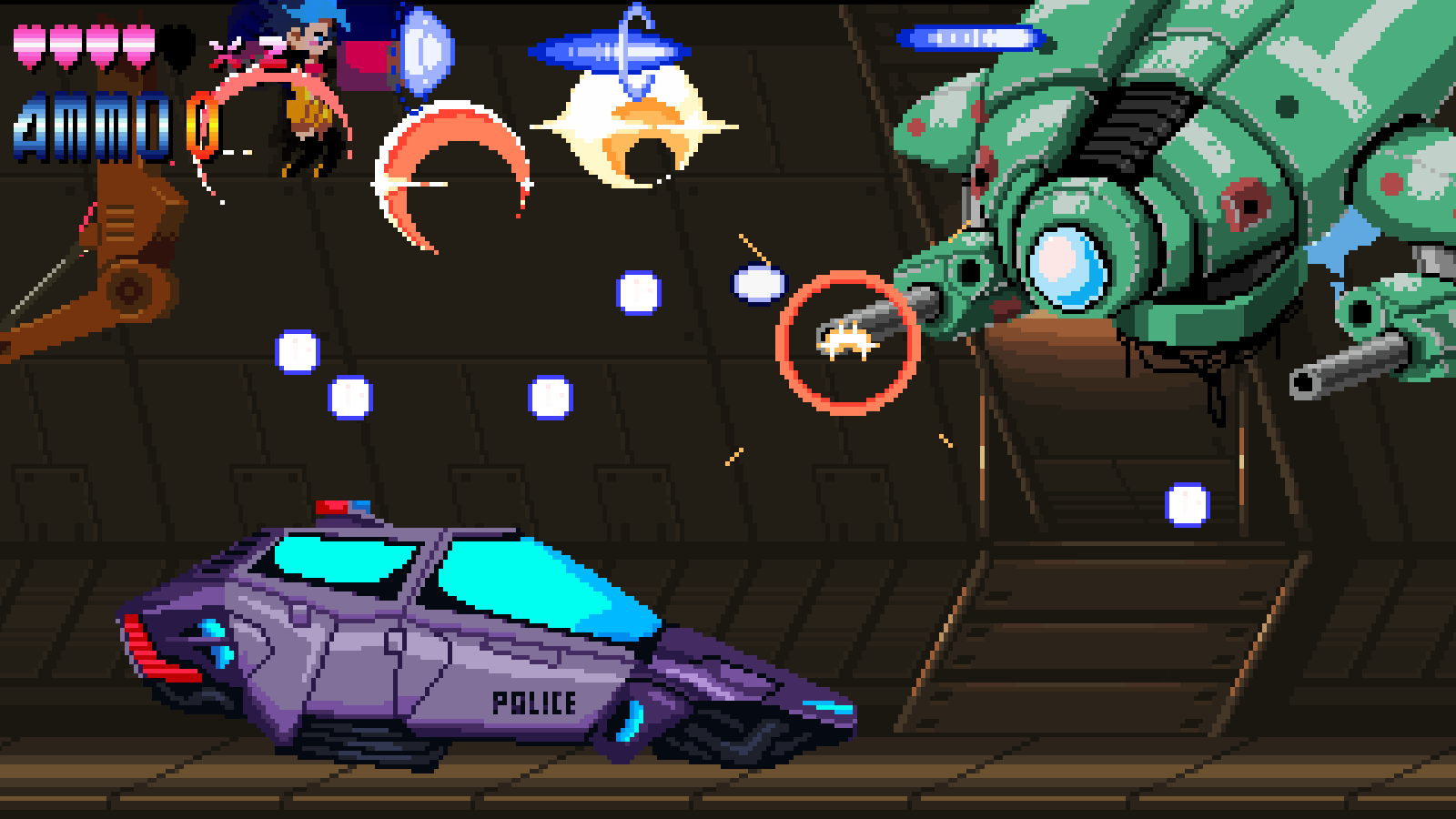 More than one way to beat a boss

Enemies and bosses offered little to no challenge as I progressed through the game. The next boss was a dragon-like robot that moves about the screen in a predictable manner, shooting one type of blast. I get it – you want to give players time to become accustomed to the game, but it takes too long for the game to become challenging. The levels never seem to force you to use the double jump and dash enough to make it feel as if they are useful mechanics in the game, and leaves you wanting more from the level design. Occasionally, you’ll find a platform to jump onto, but never are they used to challenge you as a player or give the levels a sense of depth – and that’s how much of the game plays. I often got the feeling of emptiness in the game: from the level design to the game mechanics, the game felt like it wanted to offer more but opted to keep gameplay simple. Almost as if this were to be a mobile game to jump in and out of as you move about on the go: and that’s where I ran into a caveat that I couldn’t ignore: no option to continue.

If you are in the middle of gaming and find yourself needing to step away for a while, think before you leave. Unfortunately, there is no continuation option if you stop playing and quit the game. In 2020, I find this hard to accept, and it’s those little things that make this game feel more like most of the development time was spent on the game’s visual design and not on the mechanics, levels, and options, and it’s difficult to see how it can remain relevant. 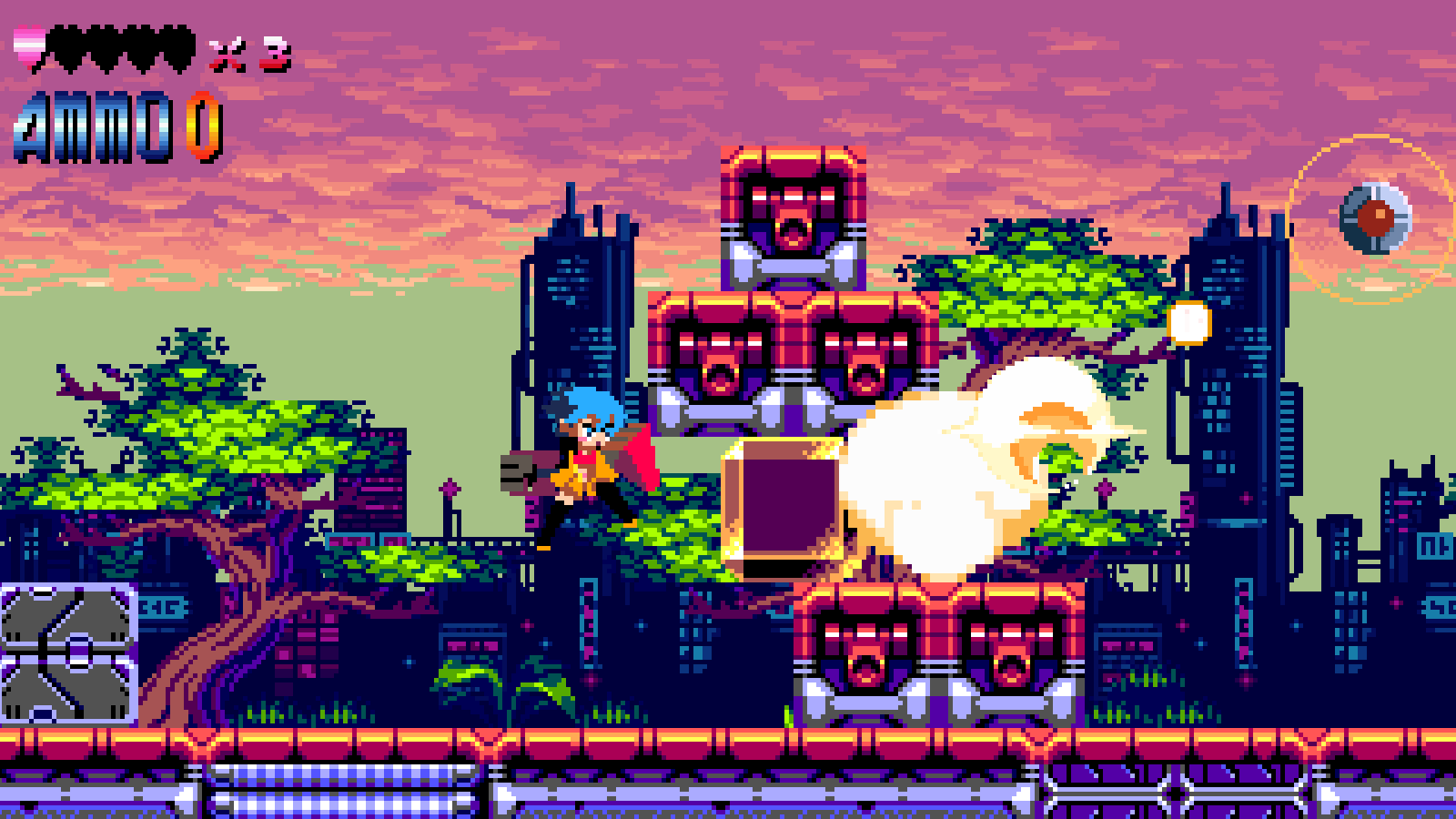 One of my biggest gripes of the game is that, as you run n’ gun, if an enemy gets too close to you, you will automatically perform a melee attack that kills the enemy. Though it’s great to be able to have multiple offensive options, it hurts the pace of the game by slowing down the gameplay in a fast paced game. Performing this melee is out of your hands and leaves you open to bullets and blasts from other enemies. Also, the more you shoot, the more the screen subtly shakes as you shoot and kill enemies, which later in the game I found annoying as the jittering of the screen gave me a headache. Dying a lot is natural in fast paced games, so it’s always good to know how many lives you have and continues, yet Ritual Games, the developers, felt to not let gamers know how many continues you have before you must start from the beginning of the game. Again, it’s the little things that annoyed me because I had to learn this on the fly.

Gun Crazy is a fun game that anyone should want to jump into and wreak havoc of pixelated destruction from start to finish. With its classic gameplay and frantic style of pace, Gun Crazy is easily one of the easiest games to jump into. Though it’s lacking on the level design and the overall necessities of feeling like recent game, it's the panic-stricken pace and boss battles that will keep you coming back.

T.K. is a freelance writer, narrative designer, and author. Writing and developing narratives and giving voices to digital world and characters is his passion. As a game writer, QA game analyst, and editor for Gaming Trend, he enjoys being a part of the gaming industry.
Related Articles: Gun Crazy, Indies
Share
Tweet
Share
Submit