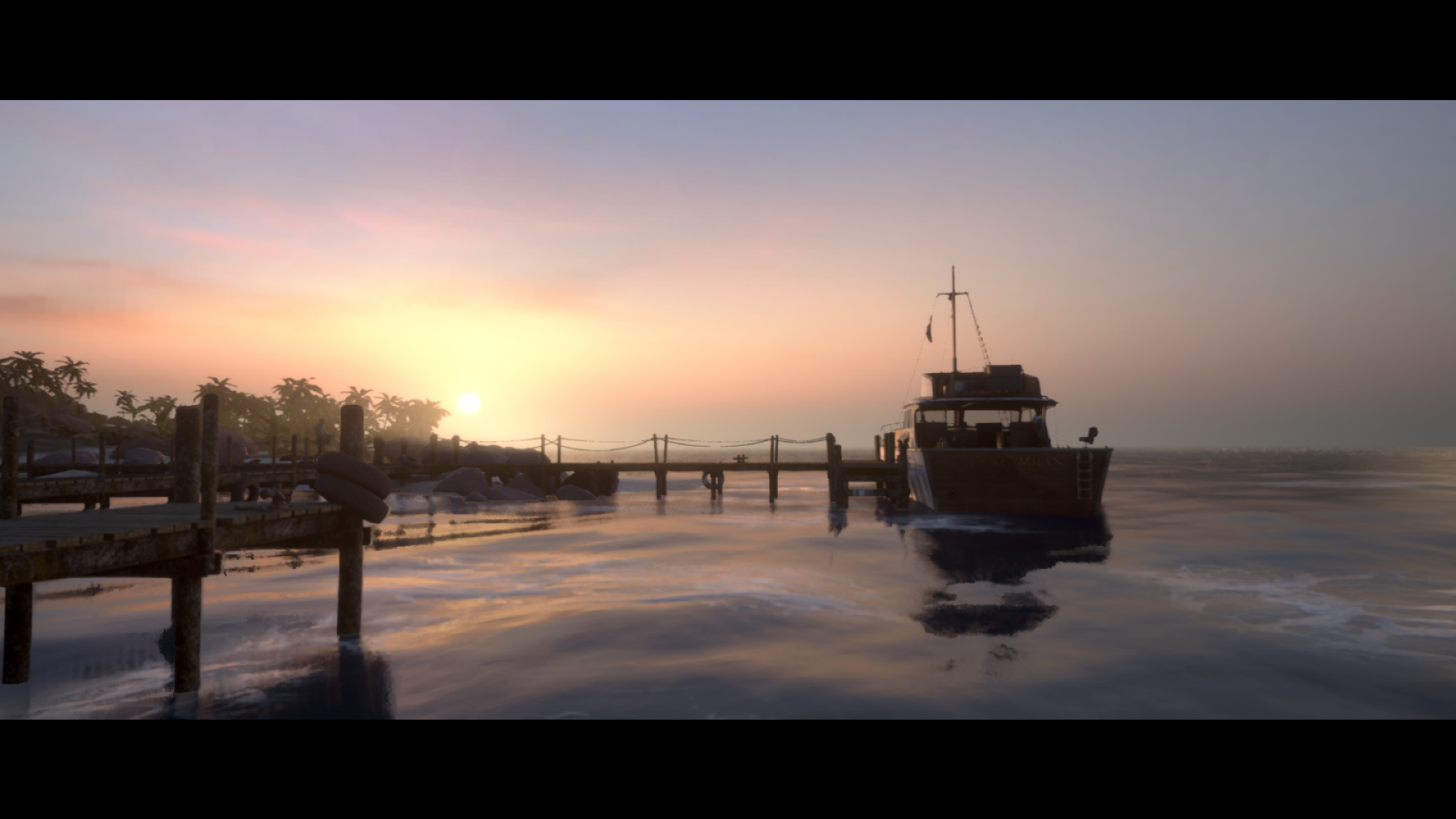 Editors note: shortly after this review was written, a patch was released that was intended to fix various bugs in the game. While some of the glitches and performance issues were either fixed or slightly improved, and it is now possible to experience all content in the game, the game still performs poorly enough that the review below does not need to be changed significantly.

Four “friends,” Alex, Brad, Julia, and Conrad go on a diving vacation off the coast of France to discover an old, undisturbed World War II bomber. Alex plans to propose to Julia during the dive, Conrad has the hots for the captain of the boat they hired, Fliss – Brad drinks one beer and gets seasick. While this might sound like the start of a horror movie, it is the setup for the horror game The Dark Pictures Anthology: Man of Medan, Supermassive Games’ spiritual follow up to Until Dawn. Players will make decisions that will affect the life (and death) of each of these characters. You’ll help them survive until the end of their vacation… Or will you? As the game’s narrative device, The Curator, says: every outcome can be favorable, according to your perspective.

The first option on Man of Medan’s title screen is “Don’t Play Alone.” I think that’s really indicative of the experience they want you to have. I (unwillingly, as a known coward) played the developer’s previous game Until Dawn with my sister, who is super into the horror genre, and I was surprised at how much I enjoyed it. It worked very well as a party game, with each person taking control of one of the game’s characters by passing the controller around. For me at least, it made the game a lot less scary and more like making fun of a movie with your friends. 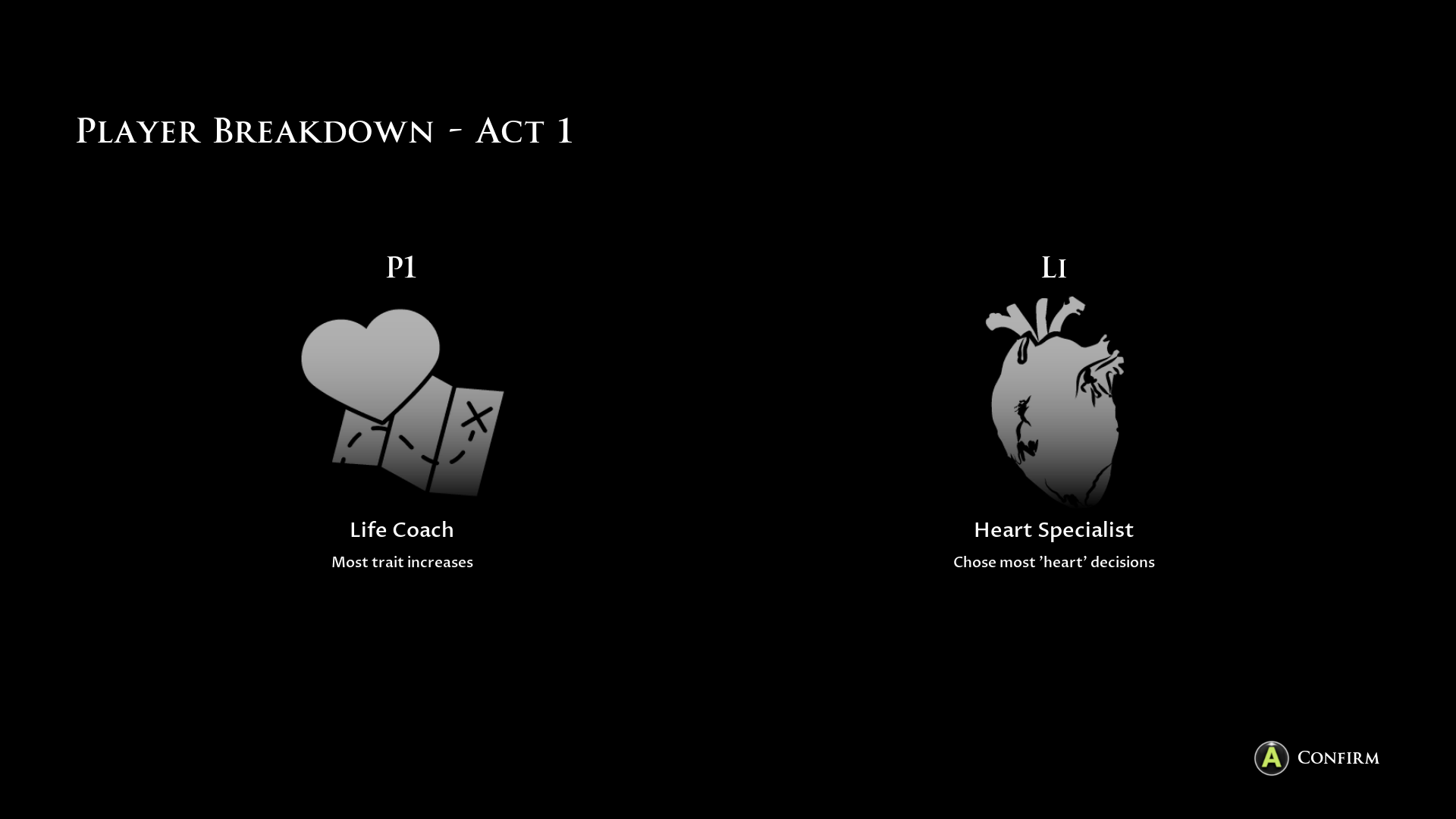 Man of Medan is explicitly designed around this kind of multiplayer, and this is exactly what the “Don’t Play Alone” option entails. At the beginning of a playthrough, you assign characters to five players, one for each playable character as well as a sixth for the short tutorial who is always locked to player one. When the game switches perspectives, it will prompt the player to whom that character is assigned to to pick up the controller and press A to start playing. Occasionally, you’ll also see a short summary of how each person is playing, like who increased the relationship between characters the most or who found the most secrets. It’s nice to have our preferred method of playing be actively encouraged by the game, but not every character has the same amount of playtime: Brad had by far the least while his brother Alex had the most. And a character dying off can exacerbate this issue even further. It’s an annoying problem, but I don’t think there’s a solution that wouldn’t make the game extremely predictable and kill the pacing. 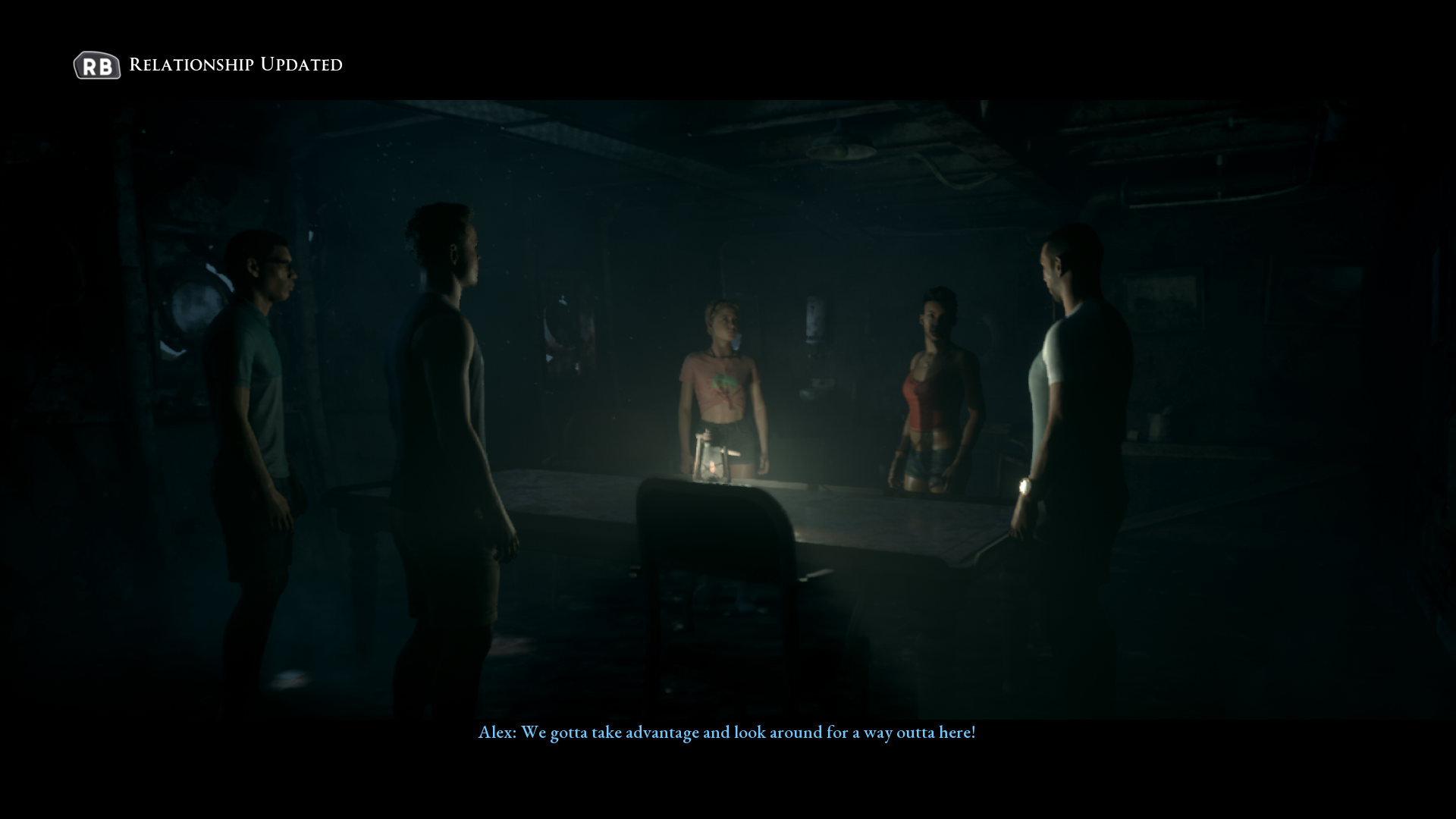 I won’t spoil anything in this review, but the story and characters are the same schlocky horror found in Until Dawn. The biggest difference between that game and Man of Medan is that these characters are much more resourceful and active in the plot; and while you may not spend as much time developing their relationships with one another, they feel a lot less like tropes and more like normal people stuck in a bad situation, even if they are a bit too reckless for their own good. If you predicted all the twists and turns of Until Dawn, you’ll probably do the same here, though I found the central mystery of Man of Medan slightly more intriguing. The actors and actresses perform well enough, the worst acting belonging to Alex, who isn’t really bad but more flat in some of his delivery. It can add to the charm a bit, but I much prefer the more believable acting of Conrad played by X-Men’s Shawn Ashmore, who my sister constantly referred to as Iceman. Overall, the performances are mixed, but no one brings the game down nor elevates it too much.

What really brings the game down is another kind of performance: technical performance. We played the game on an original Xbox One, and it is very poorly optimized. Supermassive Games did not respond to our questions about the performance of the game on the enhanced version of consoles or pc, but on the base version the framerate, which appears to be uncapped though I’m not an expert in these kinds of things, fluctuates constantly and the game stutters at the most inopportune moments. Some quick time events, which comprise the majority of gameplay, were impossible to do correctly due to the game stuttering. Using the chapter select, we went back to one of the offending scenes which resulted in a character’s death and it is actually impossible to succeed with the performance the way it is. For players on the standard consoles, this character will die. Every. Single. Time. That means it is impossible to get the best ending, as this scene and encounter appear to be unavoidable. This isn’t the only instance where this occurs. During every single QTE section after the tutorial will stutter and dip forcing you to fail and possibly die. This rips away all of the tension from the game because these failures aren’t your fault. We also encountered a glitch numerous times where the time and date that show up at the start of a scene wouldn’t disappear, the only remedy was exiting to the main menu and loading our save. 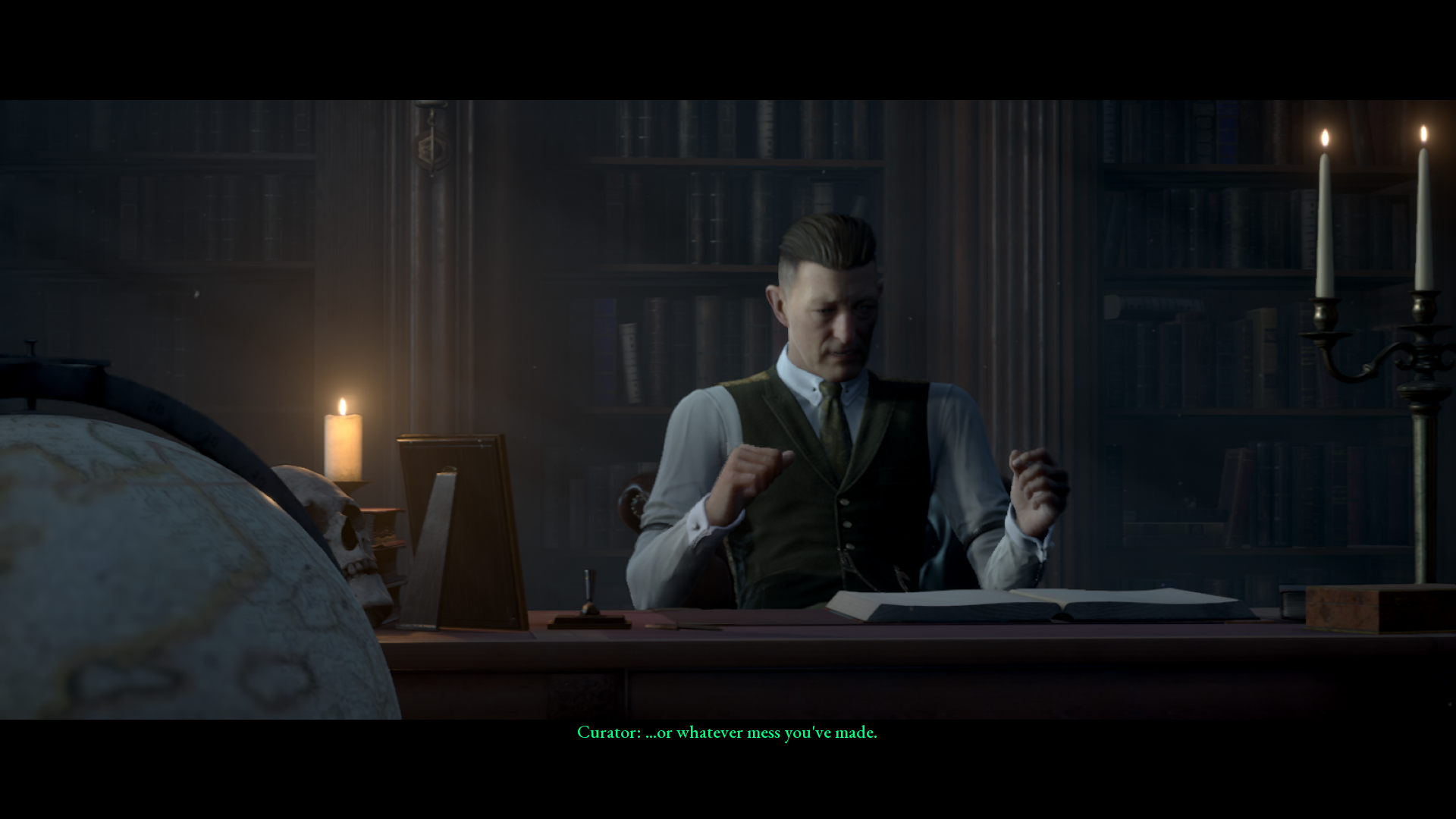 It doesn’t help that the game controls and present some information poorly. Characters are extremely stiff when walking around and will often get stuck on objects or refuse to fit into a doorway until you position them just right, and mash the button prompts in QTEs look almost exactly like the press prompts. The latter problem also resulted in a character dying later on in the game, you only have just enough time to press or mash each button. Nevertheless, we tried to explore each of the game’s detailed environments to the fullest and attempted to keep every character alive.

I really want to like Man of Medan, but the game’s poor performance ruins the experience for about 2/3rds of its runtime. It has a fun mystery to solve, likeable characters, good scares, some fantastic cinematography (gametography?), and promises a lot of replayability. But as it is now, on the base consoles, I can’t recommend this. At the very least, wait for a patch. If Supermassive fixes the performance issues, I would easily give this game at least an 80 or above. But as it was given to me, I have to give the game the score below.

A great game held back by numerous technical problems. The Dark Pictures Anthology: Man of Medan promises another great experience in the vein of Until Dawn, but at least on the standard console is too stuttery to play. Much of the content will be inaccessible due to these performance issues. If you have an enhanced console definitely check it out, but unless it receives a patch it can scarcely be considered playable.

David is the kind of person to wear his heart on his sleeve. He can find positives in anything, like this is a person who loved Star Fox Zero to death. You’ll see him playing all kinds of games: AAAs, Indies, game jam games, games of all genres, and writing about them! Here. On this website. When not writing or playing games, you can find David making music, games, or enjoying a good book. David’s favorite games include NieR: Automata, Mother 3, and Gravity Rush.
Related Articles: The Dark Pictures Anthology: Man of Medan
Share
Tweet
Share
Submit