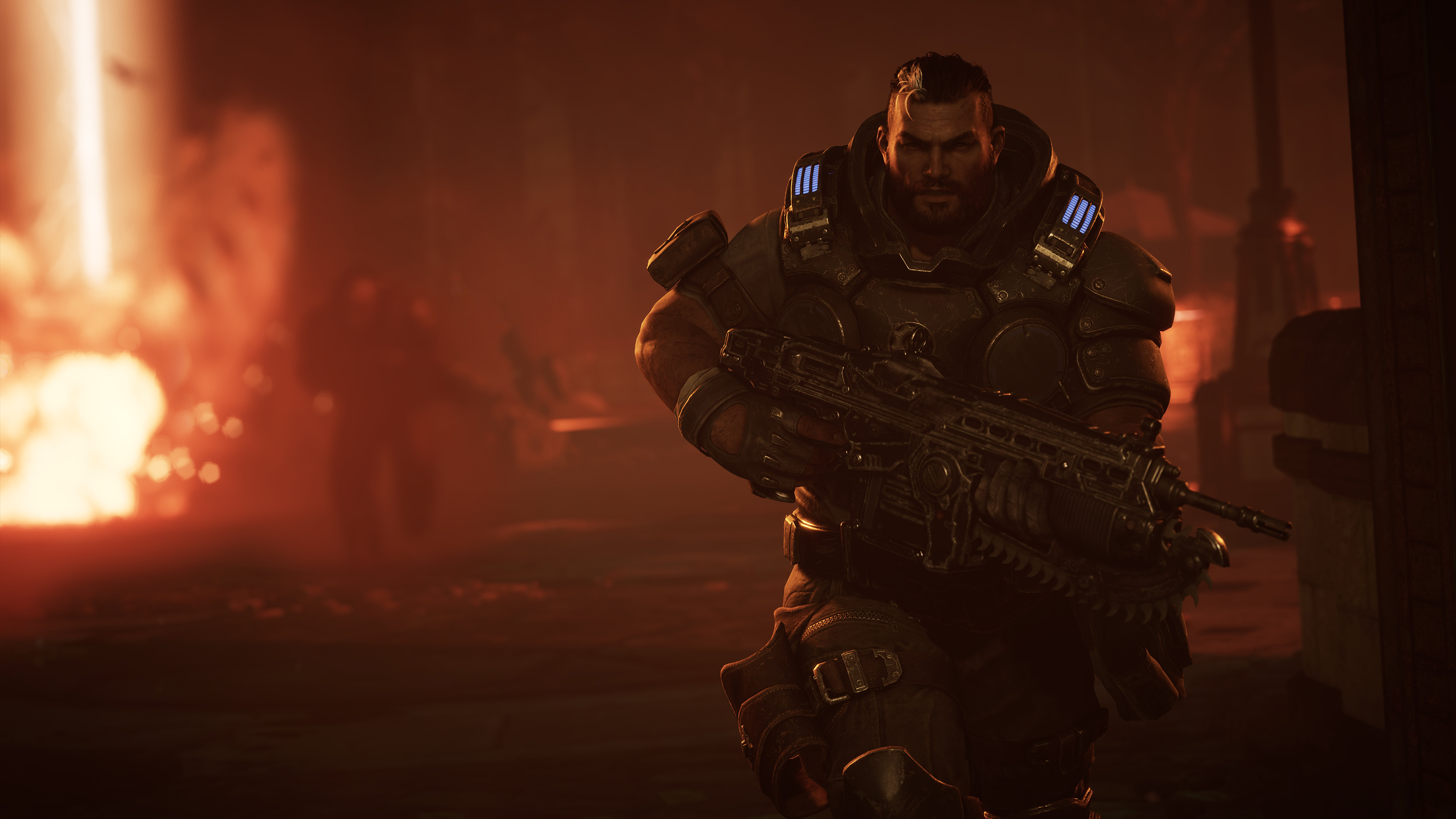 On the heels of another truly awesome entry in the Gears series, it might seem bizarre for The Coalition to release the exact opposite kind of game you’d expect fans to have an interest in. Gears Tactics is a turn-based strategy game that throws the old Gears rulebook out the window and reinvents itself in a completely unexpected way, which is a pretty weird move for a series that has always been associated with fast-paced shooting and gore. Luckily for us, this gamble has resulted in an awesome, complex, addictive, ambitious strategy game that’s far better than it has any right to be.

Gears Tactics immediately differentiates itself from other tactics games by having a pretty compelling story, and one that’s rooted deeply in the lore that Gears fans have been following for more than a decade. In between gameplay segments one might even mistake it for a proper mainline entry in the series, which got me invested in the story more than other tactics game has succeeded in doing. The story focuses on Gabe Diaz, ancestor of Kait Diaz, the protagonist of Gears 5, and his crew as they hunt a Locust named Ukkon. Ukkon is responsible for creating all the giant monsters you see throughout the Gears series and so dealing with him becomes a priority for the COG.

While the setup is compelling and the cinematics are top-notch, sadly the story doesn’t really do much beyond the initial premise. Gabe and the rest of the crew don’t standout as characters either, certainly not to the degree we’re used to seeing from the Gears franchise. Ultimately, Gears Tactics feels a lot like a straightforward “hunt the bad guy” action movie, with very few twists and turns.

The main way Gears Tactics sets itself apart from other tactics games is that it’s far less rigid. Instead of placing everything inside a grid, Gears Tactics has open levels that feel more fluid. Instead of having one turn for movement and one for attack, you get three moves that you can use in any manner of your choosing. What’s more, executing downed enemies via Gears’ signature brutal finishers rewards additional moves. These tweaks to the genre speed up gameplay and help it retain the feel of an action game despite the massive departure from third-person gunplay. And because your units can do more, it means there can be far more enemies in play than in other tactics games, so you really feel like you’re fighting off a full invading army rather than a handful of enemies. 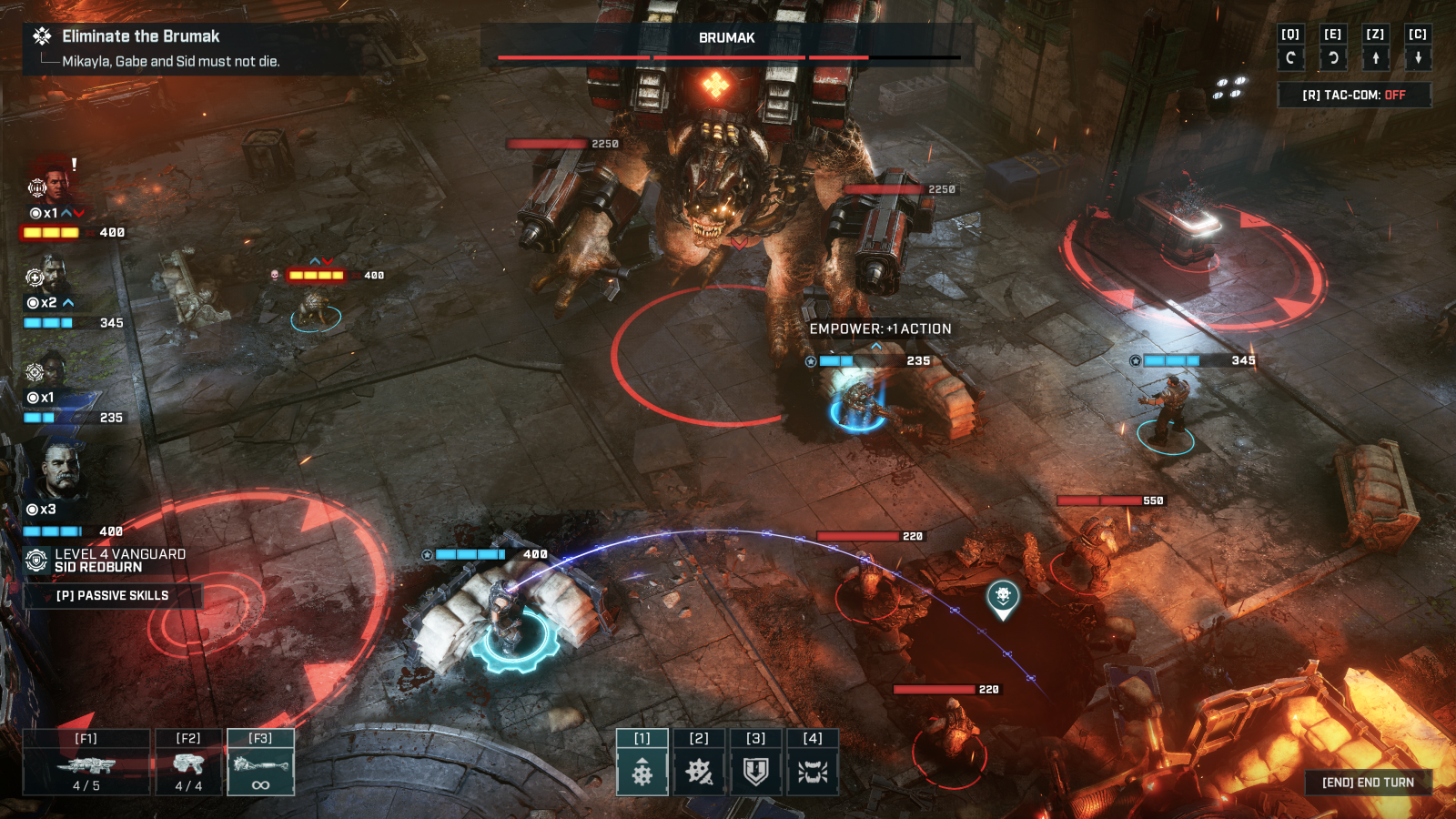 And that’s the real triumph of Gears Tactics: It’s a turn-based strategy game for the PC that somehow feels right at home with the mainline Gears franchise, and that’s no small achievement. Chainsawing enemies in half, ducking behind cover while shooting at charging locust hordes, and staring down massive, frenzied beasts in a chaotic boss fight are all present and accounted for. And as a fan of Gears from the very start, that’s goddamn fantastic.

Gears Tactics also innovates “overwatch,” the mechanic that lets you play defensively and guard against enemy attack. Instead of your units randomly firing at inopportune times, overwatch lets you place a cone of effect onto the battlefield that your unit will guard. Stretching the cone farther out makes it wider, but also makes your unit less likely to hit (with the notable exception of the sniper, which is less accurate close-range). Also, if your unit has multiple moves left on their turn, all of those moves can be applied to overwatch, so they’re able to down multiple enemies foolish enough to charge through their line of sight. 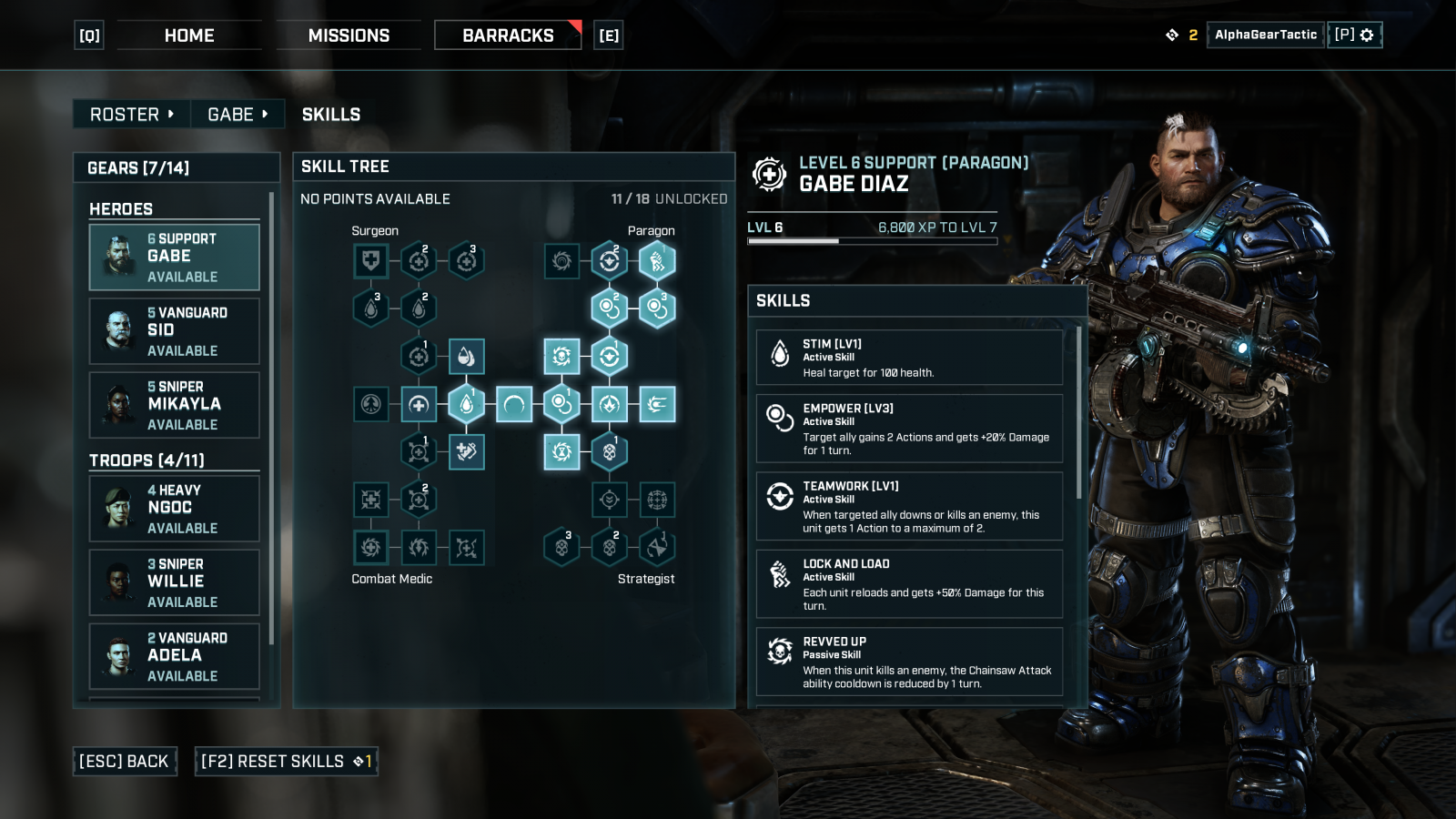 It wouldn’t be a Gears game without boss fights against oversized Locus monstrosities, and again, Gears Tactics delivers. In these levels, methodical chess matches of positioning and cover are replaced with disordered and frantic encounters where constant movement and dishing out DPS to the boss are paramount. In one such encounter, a particularly nasty Brumak tries to stomp out your team, stopping regularly to loose a barrage of missiles. Winning becomes a matter of spreading out to control the battlefield and attack from all sides. These encounters don’t always make the best use of the abilities you’ve spent valuable time optimizing, but they do help break up the monotony of running otherwise straightforward missions.

Speaking of which, the RPG mechanics of Gears Tactics are surprisingly robust and addictive. Skill trees are massive and filled with game-changing abilities and upgrades that are genuinely hard to choose between. Similarly, gear you earn or find on the battlefield is diverse and can be optimized for different play styles. Once you get started upgrading a character’s build, it’s easy to become obsessed with creating the perfect Locust slayer. It’s unfortunate, however, that there isn’t any kind of base-building mechanic seen in games like XCOM. Though the character customization is so deep it hardly needs it, as an RPG fan it would have been nice to have another way to progress and improve. Combat also may have been benefited by having slightly more classes to play around with. Gears Tactics only has five classes, and while they all vary widely and have numerous different builds to play around with, it pales in comparison to the variety seen in other tactics games. 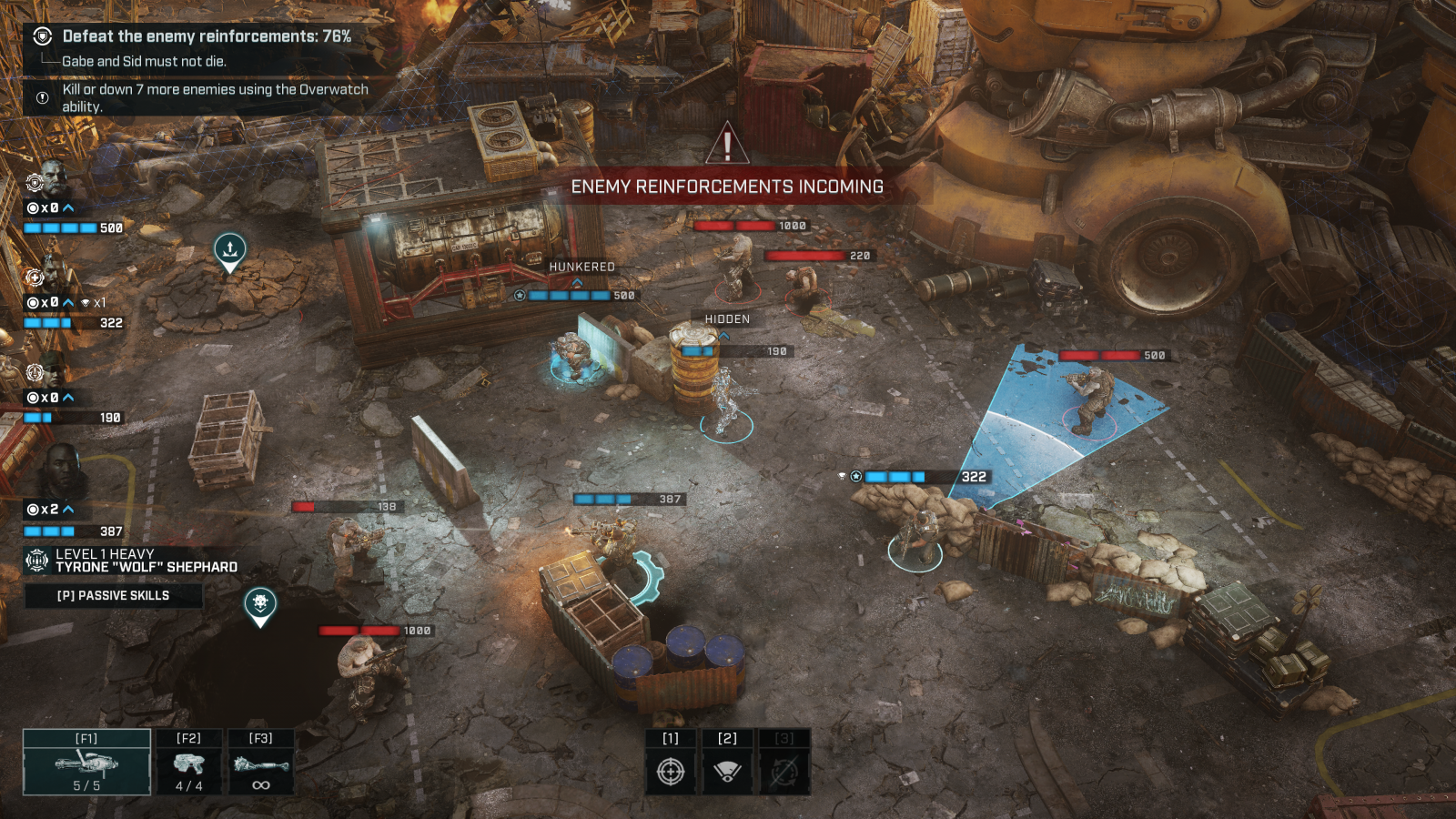 Like other tactics games, the objectives in each level are pretty run-of-the-mill. You’re told you need to blow up this thing, steal that thing, free this prisoner, or simply kill the enemy. While the core experience of fighting off Locusts is awesome and rarely gets stale, the mission types don’t always feel so fresh. This is especially noticeable since each chapter is padded out with side quests when you’ll repeat the same types of missions numerous times in between major story beats. It’s not the end of the world, since combat is consistently enjoyable, but there’s a lot of wasted potential in having to rescue teammates from Locust pods for the eighth time when Gears is known for its creativity in campaign design.

Gears Tactics is a stellar tactics game that still manages to feel like the Gears you know and love. With a solid story, addictive RPG systems, and dozens of hours of gameplay, this is a must-play for any fans of turn-based strategy games or the Gears franchise in general.

You know that jerk online that relentlessly trash talks you after every kill? That guy was probably Travis "Tie Guy" Northup. Competitive, snarky, and constantly wearing a tie, Travis has been writing his opinions about electronic media since he was a teenager, and is pretty much the only person to hold his opinions in high regard.
Related Articles: Gears Tactics
Share
Tweet
Share
Submit