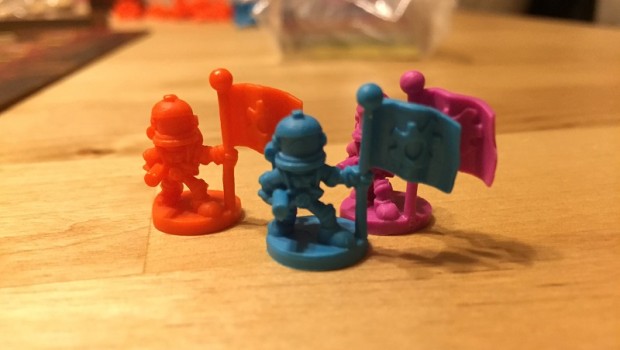 RECRUITER
Listen up, chums! I’ve heard news from the Scientific Society, and get this: there are Victory Points on Mars!

General excited murmuring from crowd. This news is being taken very well. Victory Points are dope. Everyone wants some. A woman wearing a pith helmet clambers up to the platform overlooking the row of bronze rockets. She stands next to the Recruiter. She is the EXPLORER.

EXPLORER
He’s right! Join me and we can bop around the confusingly-named Martian sub-areas and lap up those Victory Points like no one’s business! Seriously though, all the Martian regions have weird Latin names that you’ll never remember! It’s crazy!

A furor erupts. The crowd can’t get enough of those crazy Victory Points. Astronauts pile into the awaiting ships. Suddenly, an EXPLOSION rings out. A ship has been destroyed, viscera and tattered spacesuits arcing through the air! The crowd loses their minds in terror. A Dick Dastardly-looking dude joins the horrified Recruiter and Explorer on the platform. Dude is literally twirling his mustache. He is the SABOTEUR.

Mission: Red Planet is a goofy romp where 3-6 players jockey for control of Victory Point-rich Mars. Designed by Bruno Faidutti and Bruno Cathala (twice the Bruno!), this edition has been reprinted by Fantasy Flight Games and has deeply benefited from the company’s trademark polish.

Seriously, let’s take a moment and appreciate that this game is gorgeous. The spacemen you so desperately want to get to Mars are exceptionally detailed little dudes with bedrolls under one arm and a flag in the other. Each plastic flag has a little gear on it. It’s amazing. If this was just a box full of these dudes, I’d recommend buying it. I could play with these guys for hours.

These are some rad dudes. Look at those little flags. They are my buds.

The round tracker is a delightful clockwork-looking contraption that makes it fun to update what turn it is. Cards are beautifully illustrated, far more than they need to be, taking the potentially thin Mars theme and bringing it to vibrant life.

I say the cards are more ornate than they need to be because, at its core, Mission: Red Planet is an exceedingly simple game. It begins with a row of empty rockets ready to blast off to an uninhabited Mars. Each player has a set of cards numbered one to nine. Each represents some kind of Mars-mission specialist (Travel Agent, Pilot, Explorer, etc) that piles spacemen into rocket ships in addition to some other special ability. Each turn, everyone secretly picks a card from their hand.

The full complement of roles to choose from. The Recruiter, number 9, activates first and returns all previously-used roles to your hand to be used again.

During a deliciously fun “nine!…eight!…seven!” etc. countdown, you reveal your card when its number is called, and then you do what it says. When a rocket is full, it launches and ferries its passengers to its destination on Mars.

This happens ten times. Then the game is over. That’s it. Really.

OK, OK, so there’s a bit more. Three times per game, every explored region of Mars vomits out Victory Points for the player with the most spacemen there. There’s also a deck of little cards that can give you special goals or powers. But that’s it. Really.

The first time you play Mission: Red Planet, its speed will take you by surprise. You’ll be percolating a master plan to turn Mars into your own little private rave party only to be informed that it’s the last turn of the game. Long-term strategies aren’t exactly a thing. Instead, the game’s about leveraging what few short term victories you can eke out, because the cards in this game are mean.

We’re talking Saboteurs who can blow up docked ships and kill your dudes. We’re talking Femmes Fatale who will seduce your dudes to your opponent’s cause. We’re talking Soldiers who can kill your dudes and redeploy any enemy dudes stationed on Mars’ moon, Phobos. We’re talking Pilots who can take control of already-in-flight ships and send them to the crappiest areas of Mars, leaving your majorities unchallenged. As the player count rises, the chaos amplifies as the other players constantly elbow into your plans. There will be rounds when, by the time it’s your turn to load your spacemen onto a ship, all rockets have been blown up by your dumb friends and their dumb Saboteurs. And then you’ve wasted 10% of the game.

The red planet itself, along with Phobos, and a row of Mars-bound rockets. You have only a few ways to move spacemen once they’re on Mars, so you better get as many on there as you can.

Sounds frustrating? Surprisingly, it’s not, because you’ll be dishing it out as good as you get. This is not a grand strategy game, it’s a mad race to fill Mars with your employees by any means necessary. You’re meant to jostle and trip each other up, and the most powerful characters carry an inherent risk—their low numbers mean they activate late in the countdown, leaving plenty of opportunities for your opponents to go before you and ruin everything. There’s a bit of strategic thinking here, but not enough where you can math out the optimal move. And hey, even if you consistently mess up, the game’s over in thirty minutes.

I can think of worse ways to burn a half hour, especially with production value like this and a ruleset that takes minutes to explain and even shorter to comprehend. Seriously, that production value, though! Did you know in the original edition the spacemen were just colored disks? Lame. And that the countdown went from 1 to 9 instead of 9 to 1, which is insane. It’s like they didn’t even know how you count down to rockets blasting off. The first edition sounds bogus. This edition is a wonder to behold, and has a brisk little game attached besides.

Mission: Red Planet is a lighthearted game with a pinch of both luck and strategy. Its simple mechanics are easy to learn and make for a raucous good time for hardcore gamers and newbies alike. The new edition improves the core game immensely with delightful components that are a joy to pick up and play with.