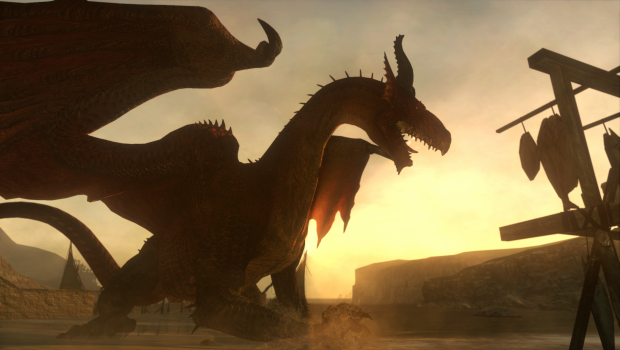 Dragon’s Dogma had quite the cult following on the last generation of consoles. It was always praised as an incredible title that was criminally underrated, but it took me until now to get around to playing it. The nice thing about a PC port of an old game isn’t just the graphical overhauls and “definitive edition”-esque content offerings; it’s that the port solidifies that said game will likely be playable in some form for a great deal of time. Dragon’s Dogma is well-deserving of that kind of archival, regardless of highs or lows.

As you take control of a fully customizable but completely silent protagonist, destined for greater things, Dragon’s Dogma starts to already lay out the differences between itself and other role-playing games. Nearly all characters are named, and town maps aren’t just laid out for you. I spent a good five to ten minutes just trying to find the item shop, and I did so by simply asking townspeople until one pointed me in the right direction.

Quests are similar, because as you set out on your heroic journey, which will likely culminate in acts of great chivalry and noble deeds, you don’t always get told just where you’re supposed to be going. Context clues are important in these cases, as the game had no qualms in reminding me that I should maybe start other quests, talk to some random townsfolk, or just peter off on another trail until I found what I was really looking for.

Massive foes like this cyclops will prove a challenge if you can’t find its weakness.

Dragon’s Dogma effectively manages to simulate the structure of what you might be accustomed to in a modern role-playing game, and then spin it in a way that seems new and intriguing, if not a little obtuse. You can play the role of a quiet, unassuming hero, valiantly seeking to destroy the dragon that destroyed his village — or you can spend a night of sultry romance with the duchess, behind the duke’s back after he’s just awarded you a pittance of gold for a quest reward. It’s a world of grays, and Dragon’s Dogma manages to successfully make you feel like you’re playing out a character.

The ways in which you can enhance and equip your character further enforce options, as the motto seems to be “let’s let the player do badass stuff.” Fighters can bash enemies with shields or grab their arms, holding them up for a good beating from their allies. Sorcerers conjure a lot of magic, from weapon enhancing elements to weird, creepy waves of darkness. I found myself playing a magic archer, which is an archer that shoots magical homing arrows.

The combat has a surprising amount of physicality to it as well, as you can grab onto large enemies and climb them to hit weak spots, or grapple smaller foes and even carry them. Once, a goblin said something rude to me before a fight broke out, so as my pawns and I destroyed his war party, I left him for last and picked him up, walked a quarter of a mile with him on my shoulder and tossed him off the top of a castle. These are things you can do within a single hour of game time in Dragon’s Dogma, as the combat feels like one of the best balancing acts between tactics and action I’ve seen since in a while.

You can climb enemies, clinging to them even as they take off for flight.

Pawns are one of the tenets of Dragon’s Dogma, and those who are excited for a second shot at this game will be pleased to know that the pawn system works incredibly well. Each Arisen (the game’s term for player character) gets a pawn, a loyal servant who follows them throughout the game. While this pawn always exists in your world, they can be called to other players’ worlds to fill out their party, and you can call pawns to assist you as well. Pawns can gain increased experience this way, and even more — pawns gain knowledge from other realms, and can help you in quests and combat. That quest where you have to find one person acting suspiciously? Your pawn already knows who it is, because they completed it in another realm. New enemies on the horizon? Your pawn already knows their weakness. It’s one of the better implementations of online play in a single-player game, and it works remarkably well.

For the graphics nuts, your bells and whistles are there. You can uncap the framerate, crank up the resolution to 4K, and mess with all kinds of anti-aliasing and options. Even running at a standard pace, though, the game looks phenomenal — albeit some of the textures show their age at the higher levels. I would’ve liked to have seen some of the grittier textures get a touch-up, seeing as they stick out like a sore thumb when you start ramping up the fidelity. Sixty frames per second is worth the trade-off, though, as it’s a much more responsive title for it.

Strides may use bows, but they’re equally proficient with their twin daggers.

All that said, Dragon’s Dogma does have a few catches. For every brilliant moment of quest ingenuity or pulse-pounding fight, there’s a good couple of quests that just seems purposefully vague, or one early fetch quest that does little else. For the freedom the combat offers, it can get a little less endearing when you grapple an enemy and clip through them, and the climbing controls while on larger creatures like dragons are very unwieldy. Dragon’s Dogma has many, many strengths, but it rarely felt like it was knowingly playing into them.

But while it may be unfocused or obtuse at times, Dragon’s Dogma: Dark Arisen is certainly an experience like none other, and one I’m glad I got to experience. The importance here is more than just getting a good game out, but keeping an important game playable for years to come. It may not blow you away the same way it did, when fewer titles tackled the open-world RPG in such a refreshing manner, but it serves the legacy well enough for new and old players to enjoy their time spent. Dragon’s Dogma was, is, and will remain an experience that is worthy of that, rough patches and all.

Dragon’s Dogma: Dark Arisen is a worthy memorial to a criminally underrated title, and although it falters at times, the design, combat, scenery, and world this game molds is one that deserves preservation.