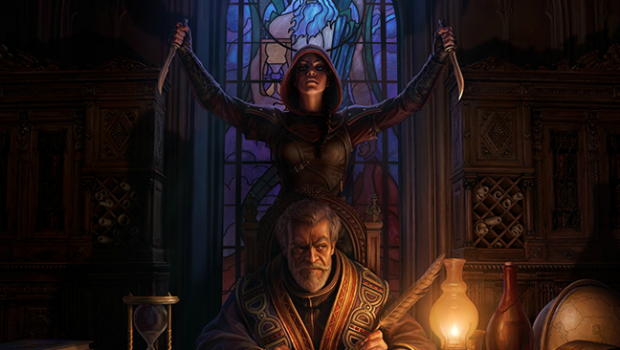 I have a feeling that I’m not the only fool who gave good money for Elder Scrolls Online on the PlayStation 4 simply because of brand loyalty.  If you are like me, you’ve probably spent many hours in the game desperate to recreate the sense of control, adventure, and duality ever present in prior Elder Scrolls titles.  While ESO has had its fair share of disappointments and frustrating features, nobody can claim Bethesda does not listen and learn.

After a pair of fairly lackluster DLC releases, ESO was greatly bolstered by the addition of the Thieves Guild.  Once again, with the release of the Dark Brotherhood DLC, Bethesda is pushing the product closer and closer to what Elder Scrolls fans want and deserve with the MMO Tamriel experience.  Blood, secrets, power, and a familiar new zone to explore leaves much to like about the latest release.

Dark Brotherhood introduces the titular guild to the universe, and unleashes their cleansing blades upon the unsuspecting innocents of Tamriel.  The largest addition is in the new assassin missions, which let you stalk and kill a target in a few interesting ways.  Basic assassinations send the character into the world proper to track, identify, and kill a target.  There are also more complex assassination missions that take place in special dungeon-esque dwellings such as the well-used Tamrelic sewers.

Both forms of assassination missions are stealth missions similar to those introduced in the Thieves Guild.  However, an immediately present issue of swift kills not being possible is nullified by a special “Blade of Woe” ability, which allows you to one-hit strike a target if you are close enough and hidden.  This new ability is cinematically pleasing and is usable outside of the missions proper, making it a much appreciated and useful new function.  Like with other guilds, the Dark Brotherhood also provides a skill tree with murder-specific perks.

The assassination missions are a challenge, and depending on how you’ve built your character you will need to craft a unique approach to your kill.  Characters built with stealth in mind will be well equipped to take out enemies and stay undetected.  Tank characters?  May as well just barrel in and murder everything in your wake.  The goals change and there are extra challenges for most assassination missions, but Lord Sithis only true demand is freshly culled souls, so no approach is wrong.

Another wonderfully surprising aspect of these missions is a non-linear feel.  Early on in the missions I was tasked with going into a series of tunnels to assassinate a travelling mage from the University.  Beyond that basic task, I was also asked to avoid detection while destroying a “Kwama Queen Egg”, which would birth an entire new colony and all the benefits therein.

My assassination target was only a few steps away from the entrance, in a large main area with a makeshift market square in the center.  The egg that I was to destroy was much further into the caves, and meant more risk.  I decided to let the baby queen live, and went straight for the neck of the mage, but the option to take a longer route and do more, if I wanted, was quite nice to have.

The only issues that I can have here is that the overall mechanics of “stealth” in this game are very cheap, and that takes away from the overall challenge of these missions.  If you are spotted by your target, all you need do is shift a little to the right or left and you’ve vanished again.  The general limitations of stealth may be a reason for this, and that’s understandable with an MMO.  That said, it is unfortunately noticeable when stealth is the main focus in almost every single mission found in the DLC.

The action takes place mostly in the newly added, but familiar zone named “The Gold Coast.”  Once an explorable area from Elder Scrolls IV: Oblivion, the Gold Coast gives players access to the towns of Anvil and Kvatch, as well as several new dungeons and delves to explore.  This new area is not a very unique area, mostly just drawing on design from the existing Cyrodil PvP arena.  It also is not very large, but it does have detail, and has plenty to pass time between murders.

Furthermore, the expansion comes with new items to create, styles to learn, and a few unlockables that provide extra costumes or perks to your character.  Overall, this is a more light than usual DLC pack for ESO, but it also has a rather slim price tag.  The overall quality of the contents here far outweigh the “light” factor, making it the best DLC pack to arrive for ESO to date.

The Dark Brotherhood is now arrived, and the clean and “safe” Tamriel we all knew in Elder Scrolls Online is changed for the better. With the addition of the guild proper, assassinations, and the familiar Gold Coast, Dark Brotherhood is the most exciting update yet for ESO, and a great sign of things forthcoming.

Patrick Rost has been with Gaming Trend since 2013. At first focused on sports coverage, Patrick has gone on to cover a wide range of games and other products for the website. Outside of Gaming Trend, Patrick writes and records music, grinds perpetually in Elder Scrolls Online (PS4), and lives day to day with his two dogs, Bob and Stella.
Related Articles: Elder Scrolls Online: Dark Brotherhood
Share
Tweet
Share
Submit