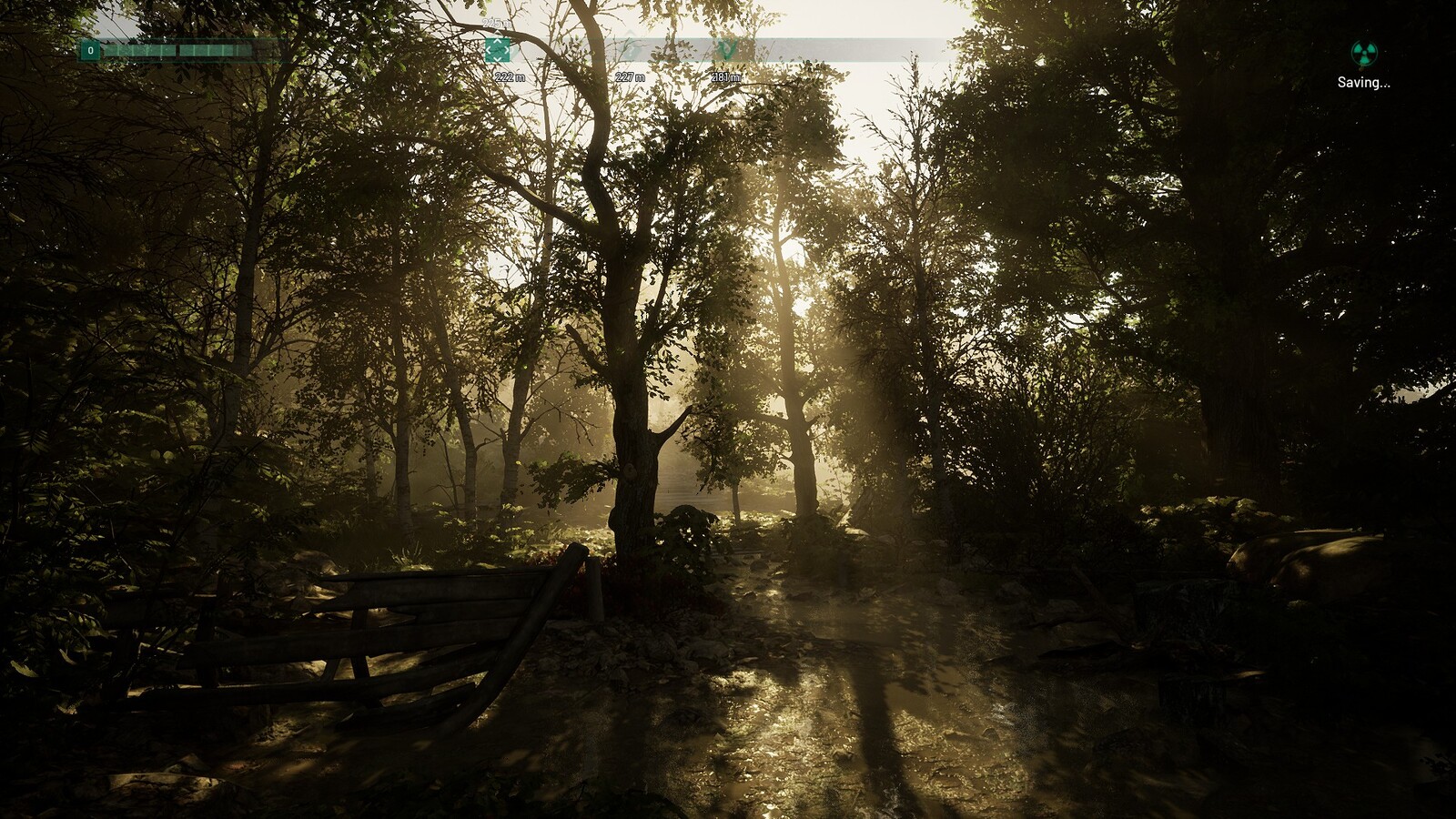 The next year is primed to bless us with a tremendous line-up of survival-horror first-person games, all of the nuclear-apocalypse variety, and The Farm 51 kicks off Chernobyl season in spectacular fashion with the aptly named Chernobylite. A healthy amount of S.T.A.L.K.E.R. influence is guaranteed, but the studio’s latest effort Frankensteins a host of features together. The trifecta of gun combat, survival, and base management serves the game’s unique narrative system which sits front and center — a welcome surprise. Chernobylite is a hauntingly beautiful mosaic of myriad things, but a bonafide horror experience it is not. It follows its own playbook, and while the game suffers from some content issues, it’s the most fun I’ve had wandering the wastelands in a while.

Immediately apparent is how The Farm 51 chooses to embrace more elements of sci-fi. Radiation and mutation have their cozy little corner in Chernobylite, but are quickly eclipsed by time travel and otherworldly beings. Igor Khymynyuk, an ex-scientist at a certain power plant, is consumed by a decades-long mission to free his fiancée from NAR, a group more concerned with the recently discovered chernobylite’s monetary value. He and a ragtag crew of eccentric survivors scour the enemy-occupied Exclusion Zone for any clues that might lead him back to his lost love. Lo and behold, Igor’s quest takes a turn for the weird, and then a few more for good measure.

Chernobylite’s world is broken up into five open areas, not including your team’s all-important home base. Every in-game day, you can assign party members to different areas to secure resources, but with a chance for failure influenced by their gear and other metrics. You’ll typically save one area for yourself, likely one housing a key story mission. Most of your time in these radiation-scared lands is spent combing through every derelict building for resources, taking them back to your base, and reworking them into new gear and upgrades. If I had a moment to spare, I spent it staring with mouth agape at the Exclusion Zone’s breathtaking vistas. Surprisingly lush greenery and stunning lighting did nothing to ease my paranoia, but at the very least gave me something to admire while legging it to my next quest. You’re treated to various weather conditions during your stay, from bright and cheery to foggy and dreary. Each area is home to a handful of different vibes depending on the weather, or in response to your actions inside. A certain area could see more enemy activity if you crossed the wrong person, for example. 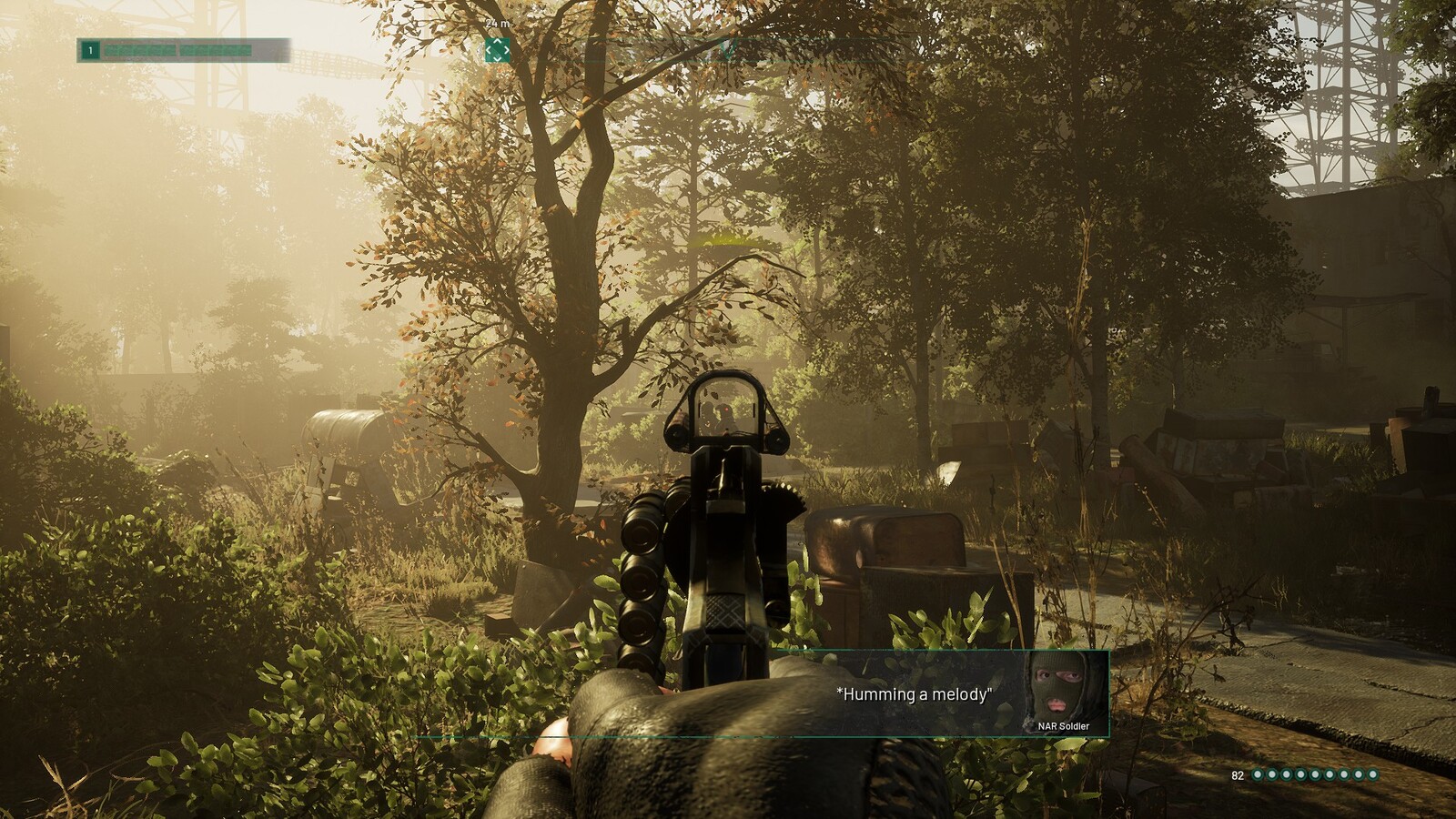 The denizens of the Exclusion Zone are…interesting, to say the least. Some are friendly, some not so friendly, and the rest are extremely unfriendly, with a few oddballs that will even join your cause if you play your cards right. Merchants take up residence in odd spots around the area, peddling various materials in exchange for food and other resources. NAR mercenaries typically patrol near mission objectives but can be found in other hot spots as well. They never deter from their tight patrol routes, and finding wandering enemies is pretty much impossible. Any surprises come courtesy of the monsters that roam the world, but they seldom spawn unless certain conditions are met. As you crank the difficulty higher, more and more dangers make their appearance, but as a big fan of normal difficulty, I didn’t have too many troublesome encounters. That is, until the Black Stalker, a mysterious NAR agent with a penchant for surprises, pops out of his portal. He’s a constant force working against you and acts as somewhat of a timer, reminding you that, maybe, you’ve been hanging around a zone for too long.

Side content in each area, marked by question marks on the map, is sparse and doesn’t seem to replenish on repeated visits. You can quickly drain the areas of content in a matter of hours if, like me, you hit a couple points of interest on your way to the main objective each run. For the next 10 hours, I was just sprinting to my objectives then warping back to my base. The exceptions are progress-gated obstacles that protect small stashes of goodies. There are also a number of scripted spooks littered sparingly around each area that aren’t always marked on the map, which kept the adrenaline levels from dropping off entirely. But, Chernobylite has a habit of laying bare all its systems and tricks — sometimes for the better, but in the case of its semi-open world, there’s little excitement. It never makes any attempt to subvert or toy with your expectations; everything is predictable.

Out in the field, you’ll have to keep a close eye on your health, armor, and psyche levels if you want to survive. There’s no regeneration in Chernobylite, so consumables are crucial, provided you have the resources to craft them. Igor has a nifty gadget that can ping your surroundings to locate certain kinds of resources you’ll need. To get the good stuff, you’ll have to stealth or fight your way through NAR mercenaries. On lower difficulties, fights won’t rob you of all your hard-earned items; the opposite is true if you decide to crank up the difficulty. The gunplay is simple but satisfying thanks to solid sound design, however, I found enemies got quite tanky quite quickly, so keep up with those weapon upgrades! Even if you play it perfectly, Igor will take occasional psyche damage in response to killing and takedowns. 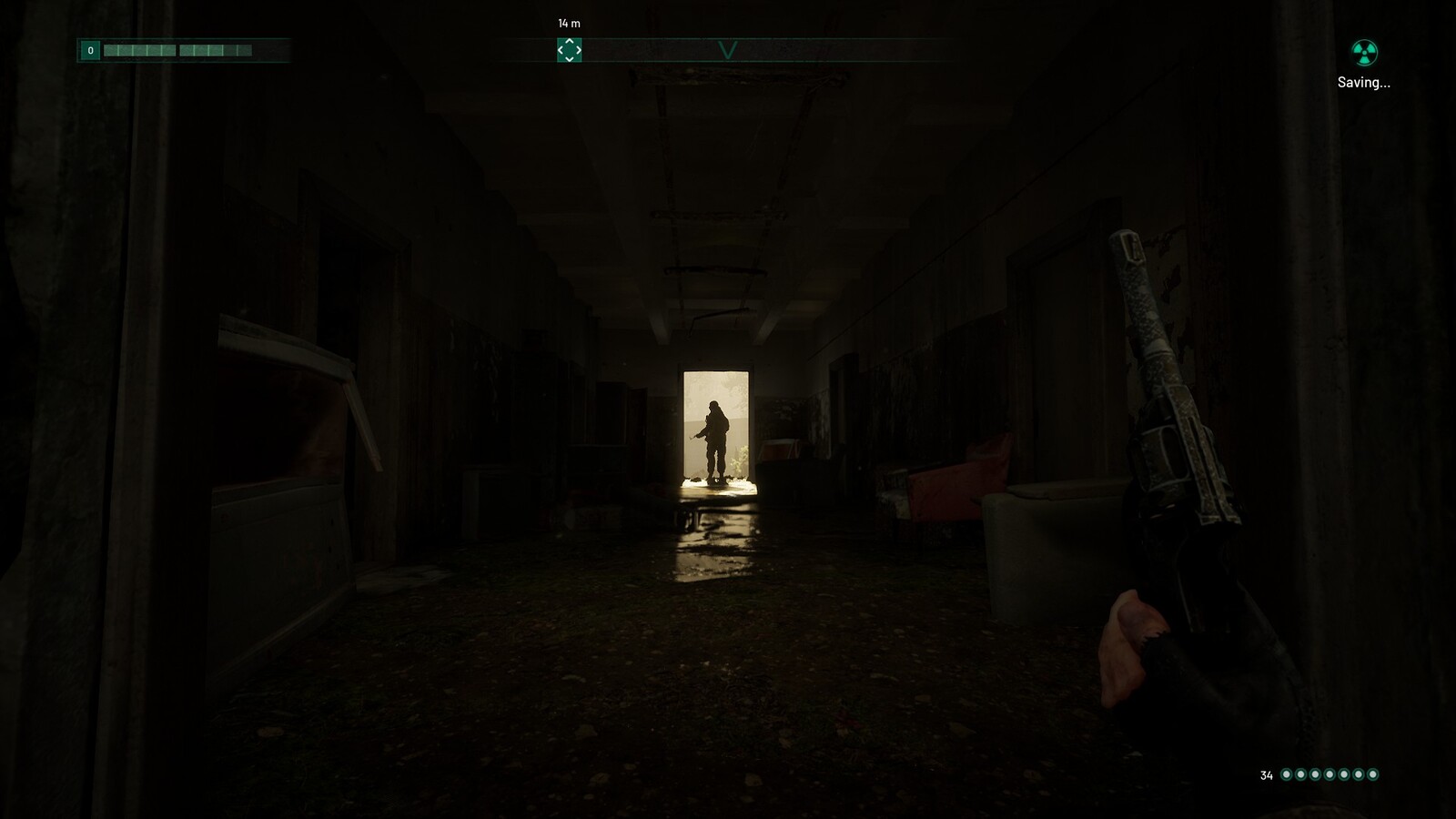 The hunter stalks their prey.

If it’s not soldiers you’re contending with, then it’s radiation; keeping a gas mask and a healthy stock of air filters is a must as rad damage will chip away at your max health. You can still craft a variety of makeshift workstations outside of your base to churn out ammo, healing items, and other survival essentials. I had a number of home-away-from-homes myself. Building structures is another way that you can really make your mark on each area. Still, the content drought gave me little reason to keep expanding my makeshift empire. Once you learn the lay of the land, you’ll be in and out before anyone even knows what’s hit them. Resources are often better spent back at home base anyway.

Coming back from missions, you’ll need an adequate food supply to keep your team’s health up. Your decisions out in the field will be felt here as the compounding consequences of your actions bear down on you by way of passionate verbal explosions. In Chernobylite, your team’s loyalty isn’t guaranteed. As your relationships deteriorate, the chance that a vital team member might leave increases. You can’t make everyone happy, and every choice you make won’t go over well with some characters. While that means one less mouth to feed and one less soldier to gear up, it also means less manpower to secure additional resources and pass progress checks. Team members also dish out knowledge after missions and take skill points in exchange for new passive abilities like increased damage with a certain weapon or improved stealth. 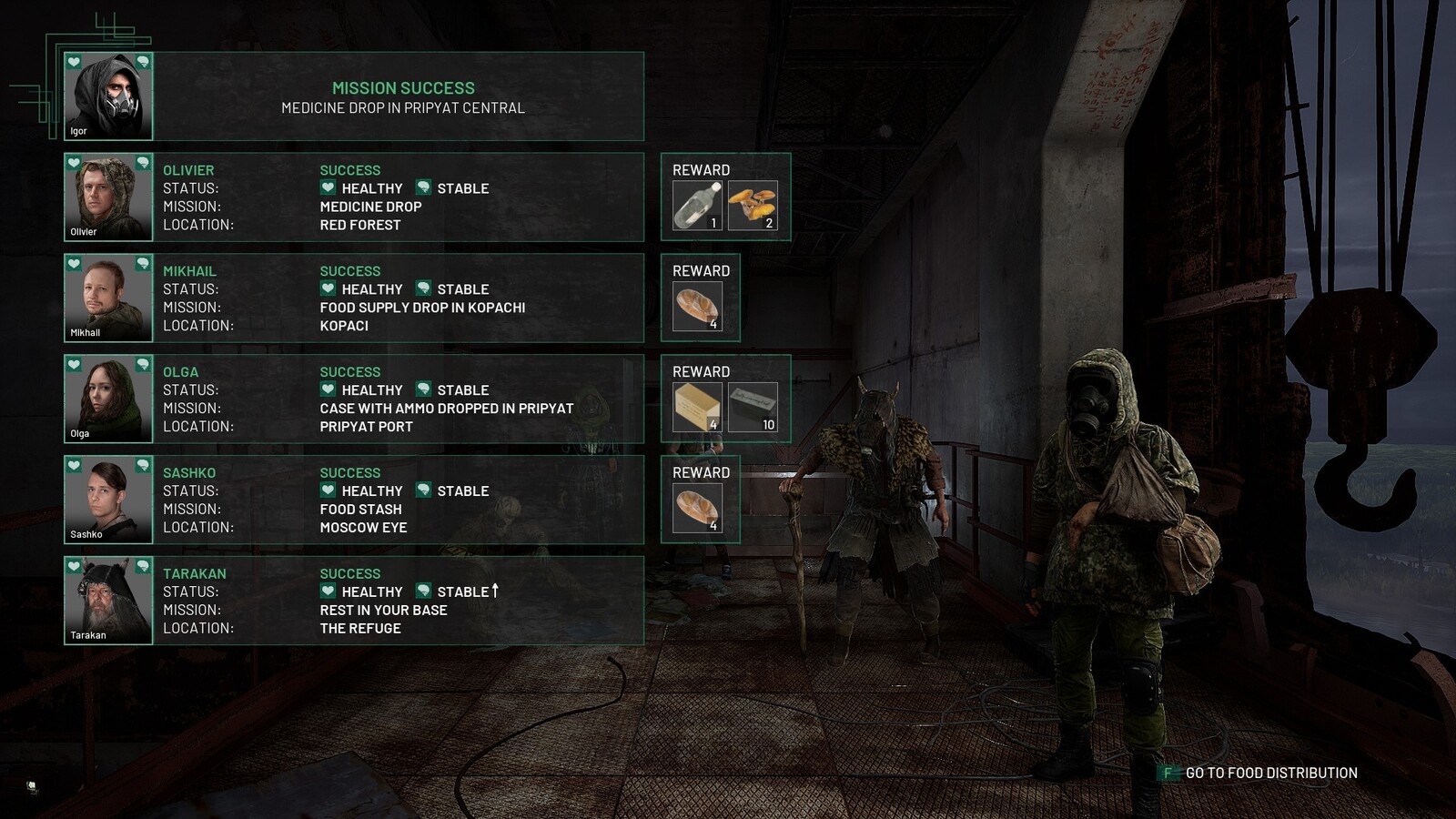 An extra piece of bread for a job well done.

To satisfy your growing crew and thirst for gear, you’ll need to spend resources building up your base. Workbenches of all kinds will eventually take up all the real estate in your previously barren base. Most structures are prerequisites for more advanced builds which you’ll need to overcome obstacles out in the Exclusion Zone. As you work your way up the DIY ladder, you’ll have to manage the base’s comfort, radiation, air quality, power, and bedding levels. It takes an interior decorator’s touch to make your new abode both functional and aesthetically pleasing — or, as pleasing as Tetanus Central can be. Juggling resources, upgrades, and building costs is a colossal task, especially on higher difficulties. Burning food to fund a few extra trips solely for resources becomes commonplace.

The rarest and most vital resource of them all is the chernobylite itself. It helps with odd tasks here and there, but its primary function is to fuel the game’s most interesting mechanic: altering the past. Every time you die, deliberately or not, you’re brought to a special, ephemeral walkway where you can revisit the choices you’ve made. For three pieces of chernobylite, you can change any outcome, sending ripples through the game’s timeline, Zero Escape style. Need a character back in your party? Earn their approval by aligning with them during crucial decisions. Need more clues? Choose to preserve a document rather than destroy it. Spending chernobylite opens the door to more experimentation and allows you to shape the experience to your liking. 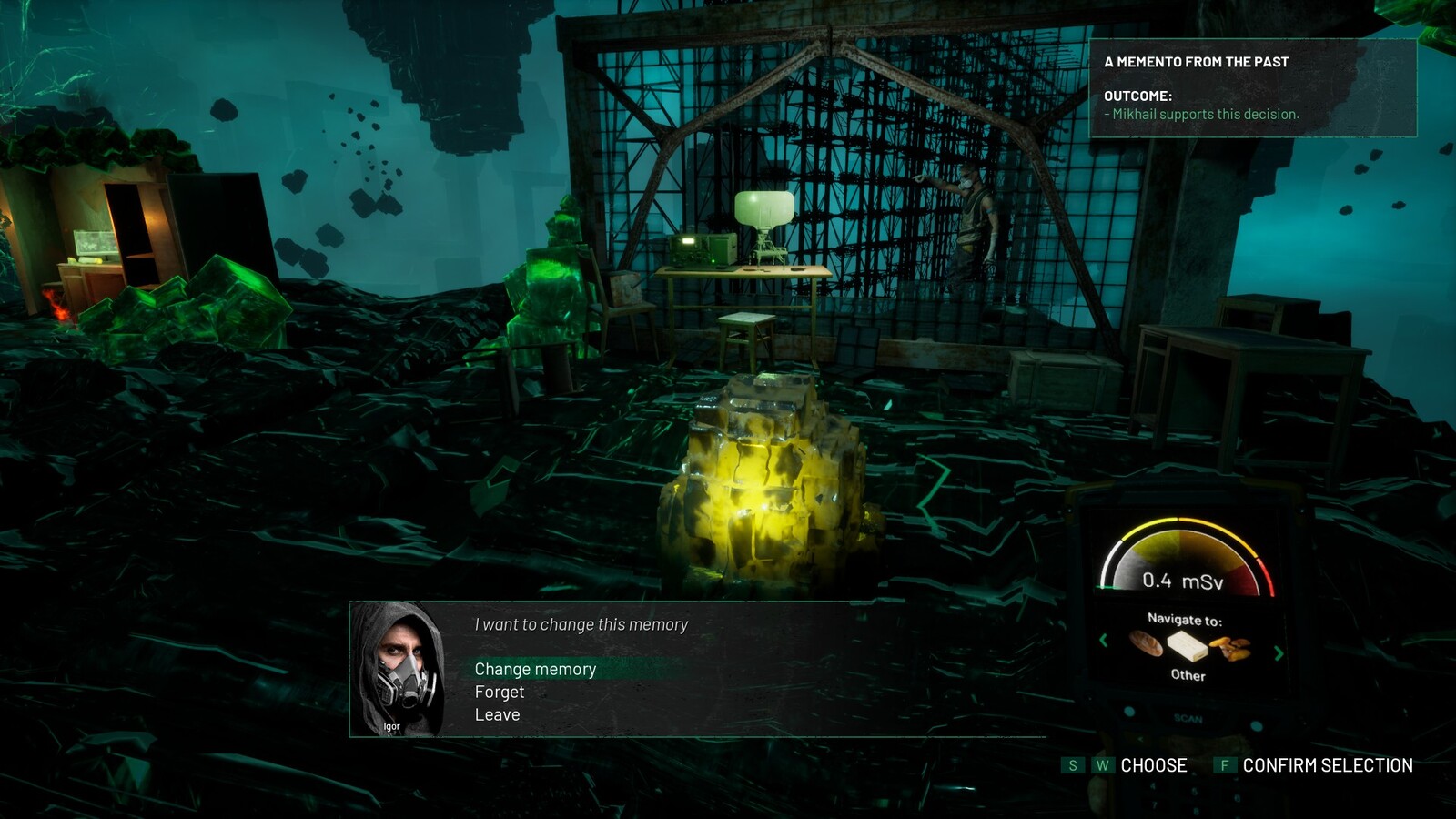 I appreciate the level of control afforded to me by the game. Being able to manipulate plot points, areas, and characters does a lot to make the experience more personal. But, it often came at the cost of any surprises, whether that be scares or otherwise. Much of the game is spent bolting across its world with reckless abandon, certain that nothing unexpected would take you by surprise and that no decision out in the field would be irreversible. The sense of urgency and danger I felt was dispelled only a few hours into my experience. The missions turned into errands; I’d have my shopping list and that one juicy morsel of a story objective that I’d save for the end. I was given almost too much control over the game’s systems, too much insight into how the game ticks, that the essential veil of mystery faded away entirely.

That isn’t to say I wish the game shed these features. The survival and management systems are comprehensive enough that I felt a necessary pressure and paranoia that colored my trip through the game’s story. The growing pool of gear and weapons that I was able to get my hands on kept combat encounters from becoming too stale. And, by manipulating key story beats myself, I was able to experience the narrative through a new, refreshing lens. Chernobylite brings a lot of interesting ideas to the table and ties it all together with a unique narrative and gorgeous presentation. If only it could’ve kept a few extra cards up its sleeve to preserve a sense of intrigue and adventure.

Chernobylite’s trifecta of gun combat, survival, and base management serves the game’s unique narrative system. With more features comes more shortcomings, but nothing drastic enough to take away from an otherwise compelling experience.

A self-deprecating, overly sarcastic pair of glasses that occasionally possesses a human host in order to partake in the delightful process of playing video games, then immediately complaining about them. When he is not playing games (a rare occurrence), he can be found either writing about things that no one cares about, or haunting the quiet streets of his Canadian suburb.
Related Articles: Chernobylite
Share
Tweet
Share
Submit