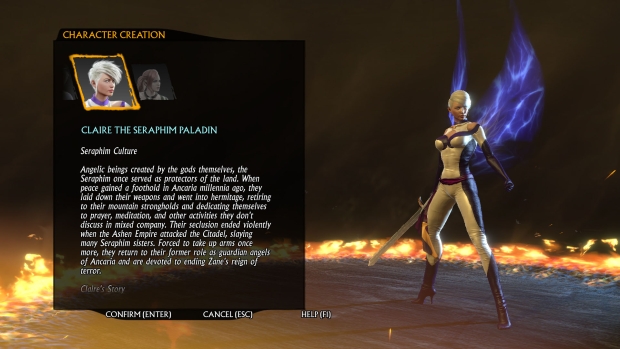 Ever since the release of Diablo, the action RPG genre has exploded. One of the early releases was Sacred on the PC. While it never gained the traction of the Diablo series, it sold enough copies to warrant a couple of sequels. However, after playing Sacred 3, I discovered that this is a sequel and name only, much to the chagrin to fans of the series.

In Sacred 3, you get to choose one of four archetypes. I thought that this looked promising since they at least have unique names instead of generic archetypes. You have the Archer, Paladin, Lancer, and Warrior, but the blandness can’t be hidden can’t be hidden by fancy names. While they all have their strengths and weaknesses, the differences between them are very small, making replaying the game with a different class negligible.

Once you have your character selected you are treated to a short cutscene introducing you to what little story there is. The animations look like a slightly better colored version of South Park or the first couple of seasons of the Chaotic cartoon series. I don’t know if the animations look like moving cardboard cutouts because of space restraints or stylistic considerations, but it comes off as cheap.

The in-game graphics actually look good, with different environments populated by the various monster types. While some of the environments are typical RPG fare (all of these games need to have a lava level, don’t they?), Sacred 3 contains jungles, waterfronts and castle ruins. When you defeat a monster, they explode in a sparkly burst of orbs and gold. The particle effects on the Paladin’s wings while performing special attacks are impressive. The graphics are a surprising highlight of the game.

Unfortunately, the voice acting and dialogue is a double whammy of atrocity. While it could have been that they were aiming for the “so bad it’s good” vibe, they miss the mark. It wouldn’t be so bad if the dialogue was better, but this makes the dialogue of the Twilight characters and Anakin Skywalker look like Shakespeare by comparison. One introduction states that the Paladin is so good at telling the future, she could predict what her mother was making for dinner three days in the future. The other lines of dialogue are filled with innuendo that not only sounds inappropriate, but sticks out like badly translated English in a poorly dubbed foreign film. It doesn’t help that the characters never shut up during the fighting. I have a very high tolerance for how bad dialogue can be, but I have never been so tempted to turn it off (if that’s even possible). While the writers likely aimed to have their collective tongue firmly planted in its cheek, the end result is insulting and written as well as Manos: Hands of Fate. A little more heart and brains would have gone a long way in making the writing better than an Asylum movie.

It wouldn’t be so bad if the gameplay had some redeeming qualities, and its first impression shows some promise. The beginning scenes teach you how the controls work, throw some easy minions at you, and then gently ramps up the difficulty. However, once you get through the tutorial section, you don’t gain any new attacks, and your equipment is slowly upgraded.

At the end of the level you gain new weapons, but you can’t switch them during the level. When enemies are destroyed you gain orbs that help replenish your energy and health, as well as gold that you can spend on unlocking skills. If you were expecting any epic loot drops, you will be disappointed. It feels weird that no new armor, weapons, or potions are dropped throughout the game. In addition, no crafting for upgrades or repairing used equipment, or any other basic tropes that have been found in the genre since the original Diablo.

As you play through the game, the enemies seem to be varied, but as you dig deeper, the differences in the characters are cosmetic. Enemy minions all charge in to attack and try to swarm you. Ranged characters try to stand behind cover. Shielded characters need to have a strong attack hit them to destroy their defenses before they can be hit with fast attacks. The only true differences are in the boss characters at the end of the level that require more timing and planning to defeat. The number of hit points they are given makes them a bigger challenge than their actual battle tactics though. This paper, rock, scissors approach adds up to make the combat watered down and forgettable.

Action RPGs have expanded their horizons, making the adventure in an open world. Sacred 3 goes back to the Stone Age and makes the game completely linear. A few side quests can be completed for extra experience, and unexplored areas containing extra barrels to destroy for gold and orbs can be found, but there’s simply no real reason to go. Searching away from the straight and narrow way is meaningless without any loot or other incentive.

I was excited to try out Sacred 3 at first, since I had heard good things about the previous games. The more I played it, the more the cracks showed, and the more disappointment set in. At least the game came in at under ten hours and the controls were responsive. It’s a shame that the game turned out to be repetitive and forgettable schlock. With the updated version of Diablo 3 and Divinity: Original Sin released, there are much better options available.