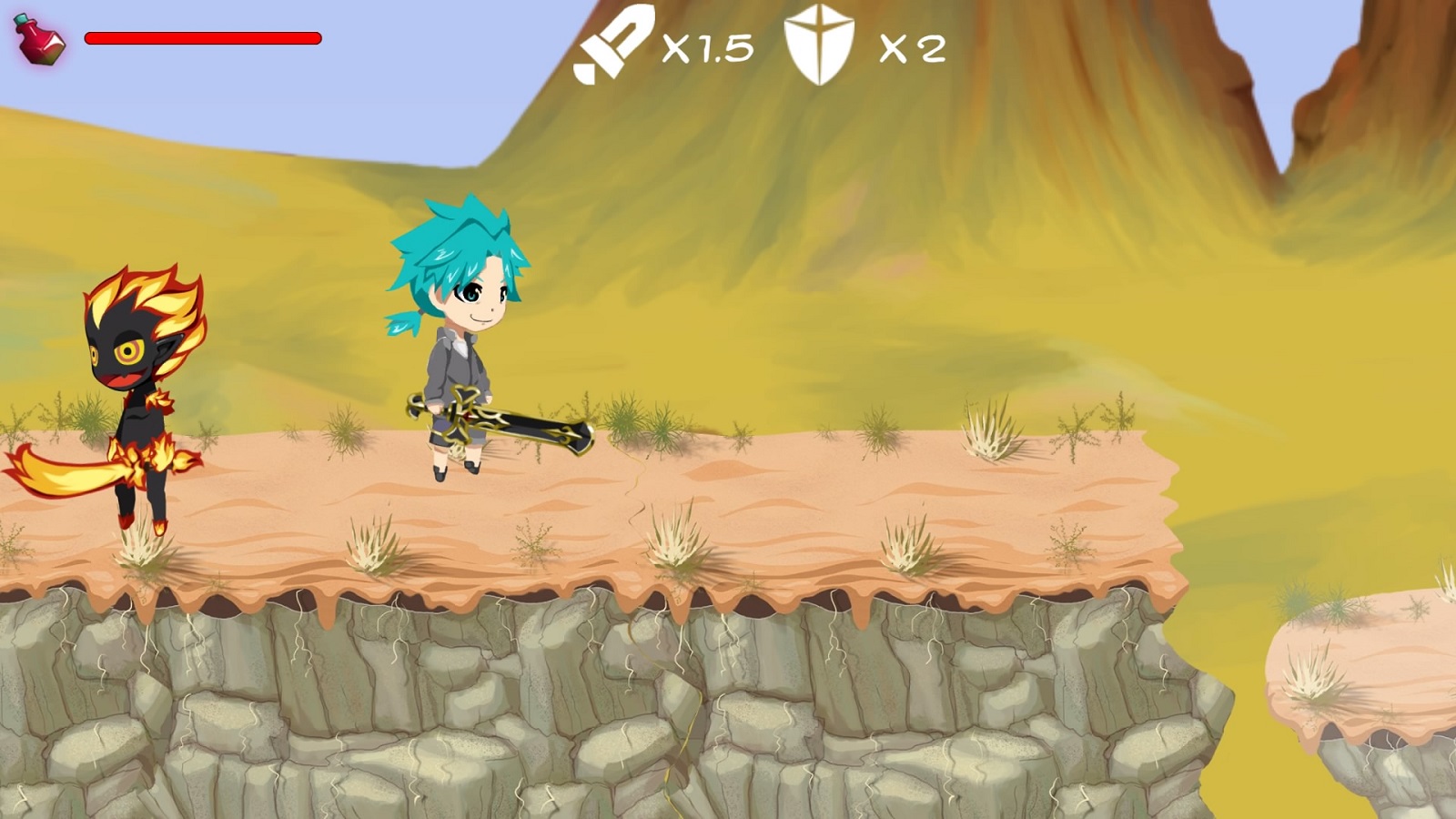 Normally I’d save my verdict until after a few hundred words, but this is important: Don’t buy Little Adventure on the Prairie, it’s not worth your time. The only saving grace for this game is that there’s a simple platinum trophy that can take you less than a half an hour to complete, but if you’re not a hardcore trophy nut, there is literally nothing that will interest you here.

Buckle in for a trainwreck, y’all.

Little Adventure on the Prairie puts you in the role of a generic blue-haired action protagonist as you move right and defeat enemies along the way. There’s really no story present, so I’m just going to assume your protagonist wants to find the reason for that this game was made. After defeating all the enemies in a stage, you move onto the next one. There are three levels of four stages each, and after beating a group of four stages, you move on to the next level. Dispersed throughout levels are sword and shield powerups (which I guess increase attack and defense, though I saw no real change in either of them), as well as potions that replenish your health. It’s a very basic progression, and… that’s all it has going for it. Little Adventure on the Prairie has the most rudimentary of platforming mechanics, and it’s not fun at all.

The gameplay is almost nonexistent; when I say you move your protagonist to the right, that’s almost literally all you do. You can jump and swing your sword as well, but these mechanics are clunky and hit detection is very spotty. Running into an enemy will deplete your health, so you’re supposed to jump on your foes and swing your sword enough times before they randomly disappear. Getting hit enough times will force you to restart the stage, but since these things take less than two or three minutes to complete, it’s not too much of a setback. It’s disappointing that the only thing you do is jump to avoid falling into gaps, since it had the potential for a more involving experience. The physics are all over the place, and jumps feel floaty and erratic. It runs at a decent clip, and I didn’t experience any slowdown or crashing issues, but considering the rest of the presentation, there isn’t any reason it should have.

Yeah, I basically just showed you the whole game, so uh… spoiler alert?

The graphics here look like something that could easily be designed in a flash program from more than a decade ago. The character designs are uninspired, and the settings are nondescript (for reference: you don’t play in the eponymous prairie for two-thirds of the game). The first and final stages are almost identical save for the backgrounds, and even then, they’re unremarkable. The enemies themselves are repetitive, as you’ll only meet six of them total (two per level, and they’re basically palette swaps). They just come at you, swinging their swords as well. The sound design is confounding, as the music isn’t too bad at first (the tracks feel like stock background music, but otherwise are inoffensive), but the tracks repeat after a while. There aren’t any sound effects, and swords clash with nary a peep, so you’re left to the mercy of the background music.

There’s no real AI or challenge here, and the only difficulty you’ll face is the spotty hit detection that will not register when you hit an enemy. The only actions the enemies seem to take are running towards you and swinging their weapons, so you can easily dispatch them by jumping on them and swinging. There’s no boss battles or anything else that resembles a real fight, except for your inevitable battle with boredom. Not that you’ll really be in an internal conflict for long, as the whole experience takes less than half an hour to complete. Perhaps the only really good thing about this game is that it has one of the easiest platinum trophies in existence, so if you’re that desperate to bolster your trophy level for friends… well, this game exists for your “entertainment”, so get to it.

Little Adventure on the Prairie

Little Adventure on the Prairie is $1.99, which can be spent on a multitude of other things on the PlayStation Store. With wholly lackluster presentation and barely functional mechanics, this is one adventure you shouldn’t consider at all.

Elisha Deogracias is an aspiring accountant by day, freelance writer by night. Before writing for Gaming Trend, he had a small gig on the now defunct Examiner. When not being a third wheel with his best friends on dates or yearning for some closure on Pushing Daisies, he's busy catching up on shonen manga and wacky rhythm games. Mains R.O.B. in Smash. Still doesn't know if he's a kid or a squid.
Related Articles: Indies, Little Adventure on the Prairie
Share
Tweet
Share
Submit