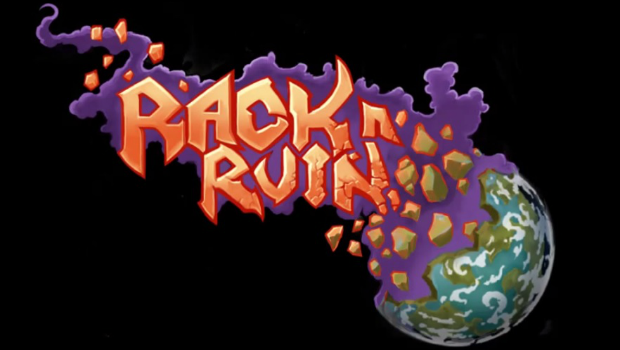 Sometimes even a murderous demon deserves a second chance.  Rarely does a soul shackled by evil redeem itself, just as rarely does a lackluster game suddenly gain appeal.  That does not mean, however, that we should always turn away from possible redemption cases.  Those few that manage to turn the page can inspire a belief that anything is possible, and that only death (or game file corruption) is the true end of a of a once-vile creation.

The world-corrupting demon overload Ruin and his trigger-happy minion Rack may never find the redemption we hope for them, but the game based on their misanthropic misadventures is a true example of making good on second chances.  Rack N Ruin, an adventure shooter starring a demon anti-hero and a lot of laser shooting kittens, is a game that was neutered while on console and has found a new life on PC.

Rack N Ruin tells the story of a evil little killer demon named Rack who travels the universe destroying world after world with reckless abandon.  While Rack loves to destroy, his ruler, Ruin, is more interested in enslavement.  Ruin sends Rack to his next target, Earth, with the specific instruction not to destroy, but to enslave.  When Rack arrives, he soon learns that his assignment to Earth is a death sentence rather than a job, and all of his demonic powers have been stripped.  Rack, ever confident, strides ahead towards his goal of complete human shackling.

A top-down adventure game that plays more like a space shooter than a typical adventure title, Rack N Ruin is an interesting amalgamation of styles that sets the tone for a game that teeters on the brink between two extremes throughout.  The game provides a lot of action without being overpowering and allows you to progress at a good pace.

The gameplay on PC can be two ways, of course.  Those using a controller will quickly find that, like with Rack N Ruin’s console release, Rack moves with a numbing slowness and attacks can only be performed in the eight standard directions.  If you are using a controller, stop immediately and go back to the ol’ keyboard and mouse.  Using the mouse and keyboard makes this game feel like an entirely different experience.  Rack moves gracefully and can fire in any direction with use of the mouse and cursor.  Everything is just smoother and quicker and more precise, the difference being almost unbelievable that the two could be the same game.  Counter to most every game on the planet, Rack N Ruin should only be played with the keyboard and mouse.

With the overarching problems of gameplay no longer existing with this latest version, Rack N Ruin starts to look like a really nice and underrated title.  The boss battles are intense and challenging, but fair.  The enemies are varied and the game uses projectile patterns akin to top-down space or plane shooters that adds an extra element of challenge and variance to the overworld exploration.  There are some detection issues with attacks from certain enemies, particularly with melee.  Melee attacks that you use also remain completely useless and will get you killed every single time.  Those issues are sour notes in an otherwise pleasing demonic gaming melody.

The game’s style is very hodge-podge but overall positive.  There is a storybook quality to the backgrounds and the character design, and it is combined with this gross-out 90’s cartoon quality that paints a fitting picture of a cliche story corrupted by something vile.  The colors really pop, and while not everything is well designed, most of the game is thoughtfully created and passes the eye test.  The music is pretty standard, and it certainly isn’t going to stick with you, but it is pleasant enough and doesn’t become a negative issue.

Rack N Ruin redeems itself with a second showing on PC, but only if you abandon your controller for the ol’ fashioned keyboard and mouse. The black comedic story of a demon set to enslave the earth pops with colorful backgrounds and challenging, fast-paced gameplay and finds redemption in its PC release.

Patrick Rost has been with Gaming Trend since 2013. At first focused on sports coverage, Patrick has gone on to cover a wide range of games and other products for the website. Outside of Gaming Trend, Patrick writes and records music, grinds perpetually in Elder Scrolls Online (PS4), and lives day to day with his two dogs, Bob and Stella.
Related Articles: Rack N Ruin
Share
Tweet
Share
Submit