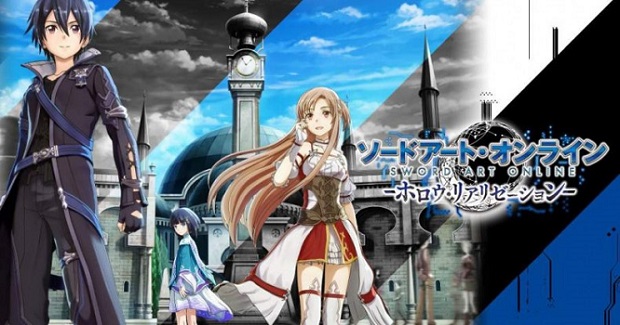 Sword Art Online: Hollow Realization seems an apt subtitle for this game, full of half-baked ideas that don’t live up to their potential. There are no objections to the visual aesthetic of the game, which seems to be the only fully realized part of this game. It is in fact the main draws, the faux-MMO style gameplay and a lackluster storyline, that troubles this game. Not only that, Sword Art Online: Hollow Realization seems to pander to long-time fans, while at the same time trying to be inclusive to newcomers. Unfortunately, this leads to a game which feels hollow and not fully realized as a game worthy of sinking hundreds of hours into.

Sword Art Online: Hollow Realization drops you into the world of Aincrad. But wait, it isn’t Aincrad? You are instead reintroduced to a familiar but different world which is known as Ainground. This new setting for the game reintroduces the whole cast of the first story arc of Sword Art Online and allows the introduction of characters in other story arcs. However, it immediately feels like a poor excuse to lump together every single character in the series universe into a ‘greatest hits collection’ for Sword Art Online.

Veterans of the series might feel aggrieved that there is no motivation in the story. You aren’t placed in a death game like in the original Aincrad, nor are you tasked to investigate mysterious deaths in the VR world being linked to the real world like the Alfheim online arc. Instead, the game has you placed into the beta test of a normal MMORPG, which is precisely why the new setting for the game does not have the same urgency as past Sword Art Online stories. There is no sense of impending danger to motivate you into advancing the main story quest. Instead, the motivation for the next quest is in the latest addition, an NPC named Premier. The question is, why are we even helping this NPC? Just because she’s broken and only seems to give you a mere coin as the quest reward? This just seems like a very lame excuse for another adventure in the Sword Art Online world.

On your adventures to help this broken NPC ‘realize’ who she is, you will don your armor, unsheathe your sword and set out into the many areas of Ainground. On your adventures, you’ll gather new equipment to level up yourself and your companions. In games like these, you are encouraged to find equipment to make you feel stronger and look cooler. However, equipment in this game does neither of these things. The weapons are the only saving grace, boasting a skill tree for each type of weapon allowing you to gain new skills and boosts for the weapon you choose to use.

The weapons definitely make you feel as though you are progressing and getting stronger. However, the armor is where things fall short of the mark; it adds stats that don’t feel important. A skilled player could probably stick with the default armor and power through the game by dodging and parrying with precise timing. So, the armor should add some aesthetic value, right? Wrong! If you want to equip the armor with the best stats, be prepared to wear some pretty silly outfits. You might be wearing some badass gauntlets with a nifty looking belt and boots, then your chest armor is a leopard print battledress with the midriff exposed. It certainly does not make you feel stronger or cooler as you progress through the game, sometimes making you wonder if you even want to change from the default armor given at the start.

When you’ve gotten over the fact that Kirito will be wearing a skimpy looking leopard print battle dress to a fight, you will get into the nitty gritty of the actual sword fighting. While it can fun at first, it soon becomes annoying as the inputs don’t feel responsive at all. You might be up against a high-level monster for a quest, and while you hack away at it, it lunges at you with one of its skills. If you want to dodge while attacking, that’s going to be a bit difficult as you have to wait for the animation to finish before being allowed to dodge out of the way. This is very frustrating as dodging is an integral part of the gameplay, and without it you will die in trickier portions.

The finicky gameplay seems to be what it is because the game focuses more on social aspects with the cast of characters. Unlike a traditional MMORPG which encourages progression through gear, Sword Art Online: Hollow Realization seems to encourage building relationships with the vast amount of characters in-game. You are given boosts for interacting with the different characters that are in your party, and this can be done during battle. While you are fighting, the game encourages you to give a ‘like’ to characters who use skills based on set personality traits that you also select. This emulates some characteristics of social media, and it’s as confusing as it sounds. Even now, I don’t feel as giving likes to the specific trait gives the characters in my party an upgrade or even if it encourages them to use skills under that trait more frequently; it doesn’t seem apparent.

Outside of combat, relationship building comes in the form of dating and pressing button prompts to the specific character’s approval. Then, after you go on more dates and start to build a rapport with the character, you can take then to the bedroom where you stare at each other and talk. Even though canonically your girlfriend/virtual wife is Asuna, you can take the whole female cast to bed if you’re male and the limited male cast if your female (although I do wonder if you can bed Agil as a male character). The prize for bedding a girl is a shot of fanservice where you see the girl in their bedroom attire. Ultimately, the dating sim element is just another feature that keeps you in the world without adding much to it. For fans however, this seems to be the perfect chance to realize your harem of Sword Art Online girls.

On paper, Sword Art Online: Hollow Realization should be a decent RPG. Instead, it focuses too much on relationship building with a cast of characters that feels too big. Instead of working on refining the gameplay systems and gear progression, there seems to be too much emphasis on fanservice. The emphasis on relationships and fanservice seems to have also detracted from the story which tries to motivate you into helping an NPC find her true purpose within the world, but instead sucks away motivation to help this character and also the progress through the story. This game seems to focus too much on hardcore fans of the series with its emphasis on the dating sim elements potentially putting off series newcomers.

Sword Art Online: Hollow Realization is a game that places too much of its emphasis on its dating sim mechanics rather than a polished RPG experience. Dodgy armor designs mar the progression that the weapons add to the game, and a rather stale storyline does not give enough motivation to want to progress through the game.