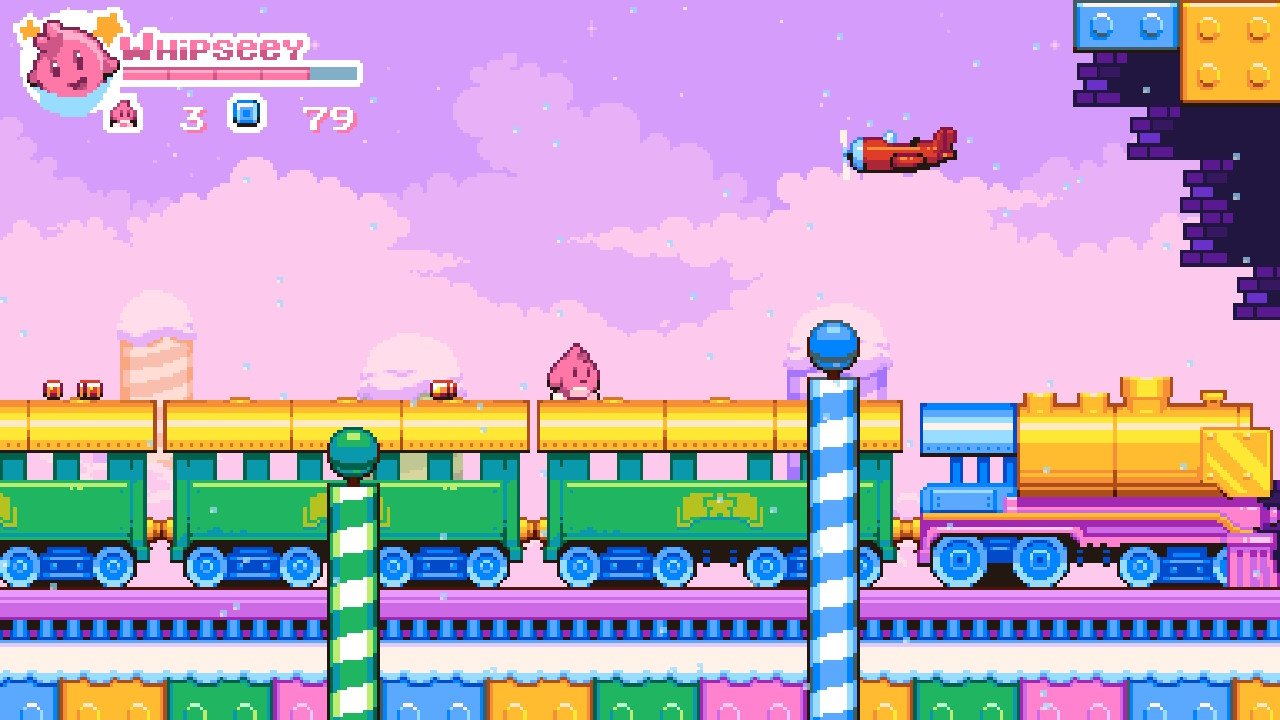 A while back I reviewed Bomb Chicken, and I was impressed with how much mileage Nitrome could wring out of a single mechanic. While pretty short, I think the game was a neat love letter to old pixel-perfect platformers, and the chicken was adorable. Fast forward to 2019, and Blowfish Studios’ Whipseey and the Lost Atlas is available now on Switch; while admittedly a cute Kirby clone with a unique gameplay mechanic, there are a host of issues that prevent me from recommending this quirky title.

If you saw the title, you’ve been given all the story there is in the game: A kid named Alex finds a lost atlas, gets turned into a Kirby-esque creature, and must find a wizard to turn him back. It’s basically an excuse plot with a wordless cutscene playing in the beginning, but I guess it gets the job done. As Alex, you have to navigate a cute but dangerous world in hopes of finding your way home; you do this with your trusty whip, your only method of attack and defense. 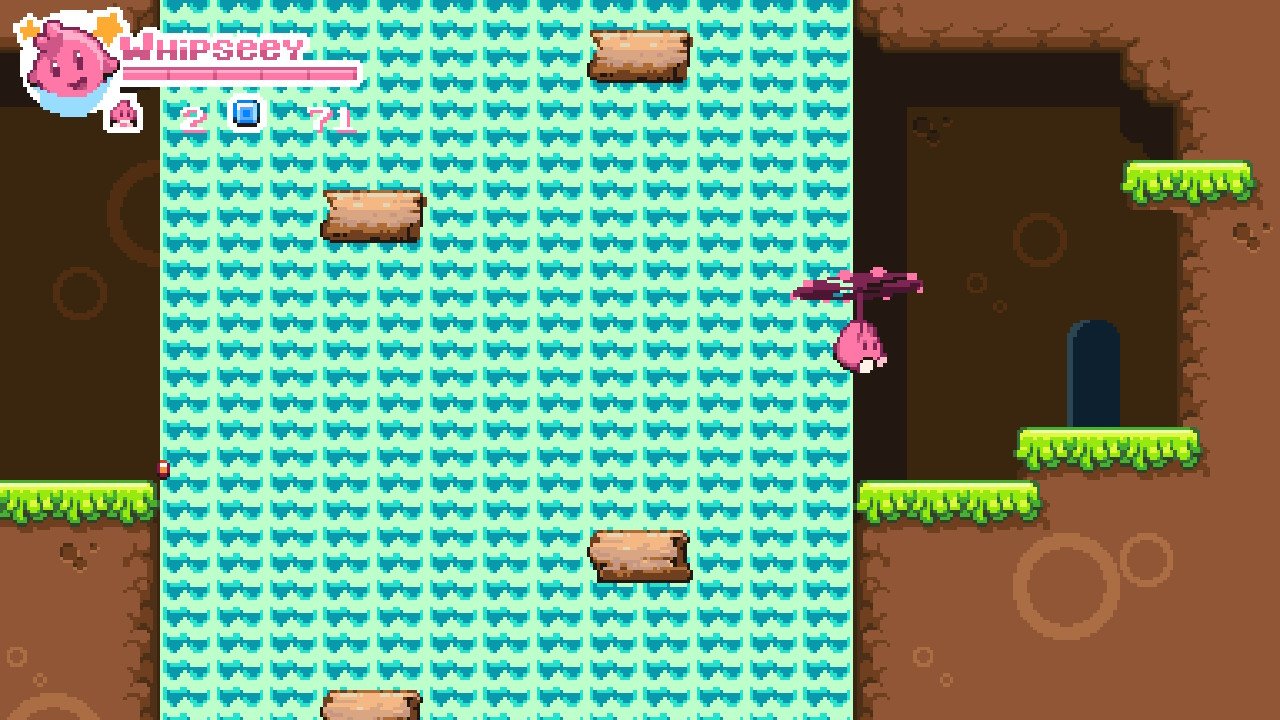 While the whip mechanic feels limited, it’s actually quite innovative. While you have your basic whip attack, you can also use it to glide down areas and even grab special rings in order to fling yourself across stages. Some enemies are impervious to your whip or jump for a few seconds, while others can shock you if you’re not careful. In addition, every stage has a boss at the end, and while they share the same mechanical weakness (hit them with your whip!), there are different attacks they have that will make you rethink your strategies. The first boss, a big jellyfish, can summon two smaller jellyfish at times, all three able to shock you should you try and whip them. My carelessness did cause me to die a couple of times, but it was a fun boss battle that overall. There’s enough enemy variety in this game to make it feel fresh, and I was excited to see what was coming up next… 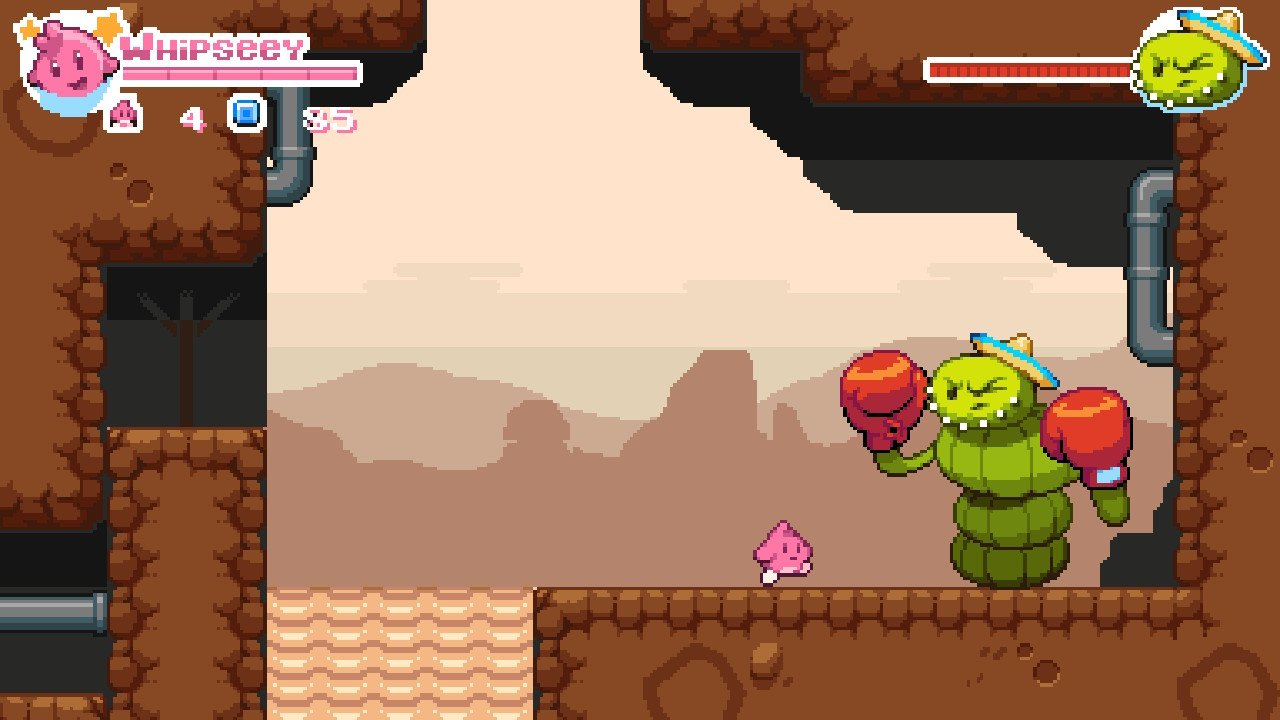 …Is what I would say if the game didn’t end so abruptly. After five stages, the game just ends with a brief cutscene where (spoiler) Alex returns home. There’s no fanfare, no unlockables, and no real drive to keep playing. Again, I would be fine with this if it was somewhere in the Bomb Chicken range (around two hours), but this game wraps up in literally under an hour. Its $6 price point was cheap enough that I didn’t feel too burned, but the game just showers players with wasted potential. Each stage is jampacked with different stage hazards and rooms that you have to navigate, but elements are dropped as soon as they are encountered. Some enemies only show up in a few rooms and then disappear completely, while other platforming challenges are underused; you know those rings that you can use to get across? I can count the moments I used them on one hand.

It’s quite a shame really, because the ideas presented in the game are pretty great. The art style is reminiscent of the SNES Kirby games, and while Whipseey is just different enough to prevent Nintendo from suing the developers, Alex’s tranformation is pretty adorable. The music is charming and varied as well, with different pieces playing depending on if you’re inside an area or outside. While performance issues are a bit on the slow side (no lag, but I feel like it could just be consistently a little faster), the game functions pretty well. 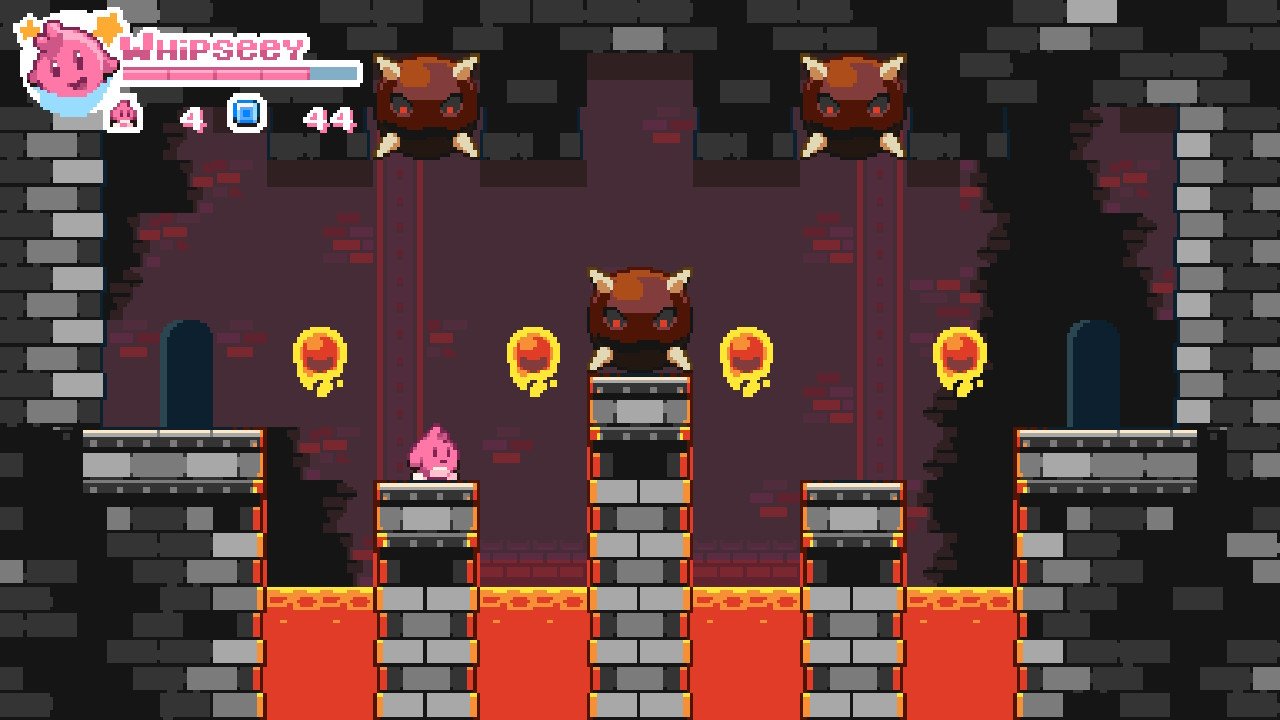 That being said, it was weird that there were enough annoyances in each stage that soured in my mouth while playing each one. From instant death spikes with no mercy invincibility to a train ride in the fourth stage that had airplanes with projectiles that were nigh impossible to dodge if you didn’t time your jumps right (brings back memories of Cuphead, to be honest), there were enough issues that felt like a pain. Hit detection can be spotty, and there were quite a few enemies that were on ledges that I couldn’t reliably hit with my whip, hitting me and knocking me back off a ledge to my watery doom. 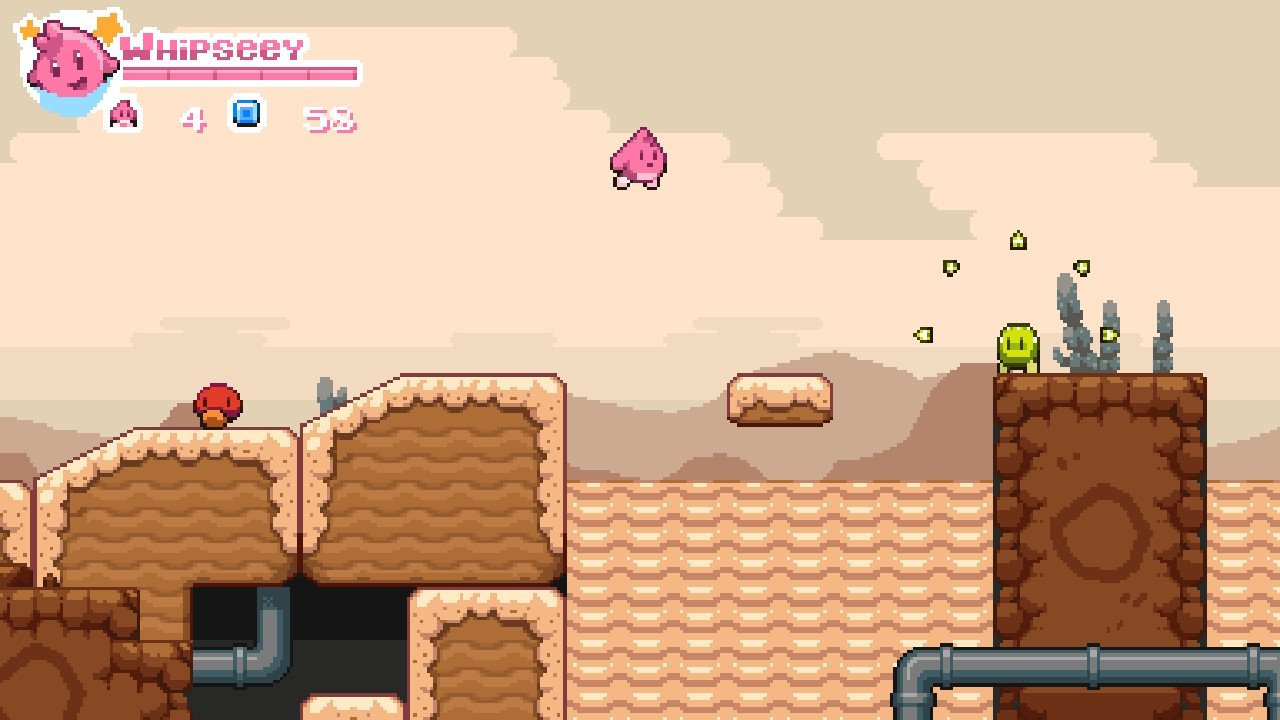 It doesn’t help that there are no real collectibles outside little gems that increase your lives. The fact that there are even lives in this game makes this feel like fake difficulty, as losing all of them will boot you back to the map screen. I think it would have been better to have an unlimited lives system and pepper in some secret items in hard to reach places (like unlockables or access to another ending), but that’s neither here nor there. Compounded with the fact that the game only consists of five stages lasting minutes each and this is a sad state of affairs.

Whipseey and the Lost Atlas

Whipseey and the Lost Atlas shows promise with its cute art style and nice soundtrack, but without longer levels or collectibles to encourage replay value, the minor annoyances that drag this game down are all the more apparent. If you have a few bucks to blow, you can try it out, but otherwise just stay away.

Elisha Deogracias is an aspiring accountant by day, freelance writer by night. Before writing for Gaming Trend, he had a small gig on the now defunct Examiner. When not being a third wheel with his best friends on dates or yearning for some closure on Pushing Daisies, he's busy catching up on shonen manga and wacky rhythm games. Mains R.O.B. in Smash. Still doesn't know if he's a kid or a squid.
Related Articles: Indies, Whipseey and the Lost Atlas
Share
Tweet
Share
Submit