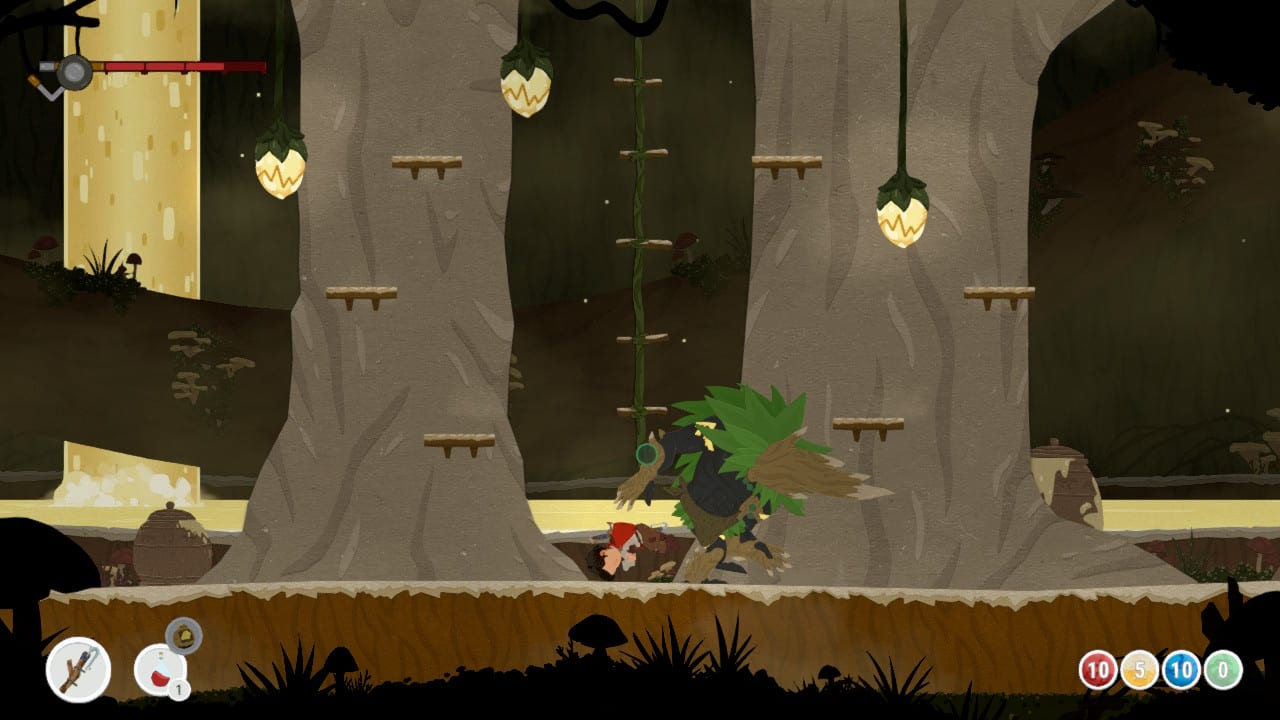 I really want to like Legends of Ethernal. It’s got a great aesthetic and style with its presentation, and combined with the linear structure, it feels like a nice little storybook. However, as I played more of the game, the veneer of cozy graphics and an engaging, if sinister, tale started to strip away to reveal frustrating gameplay and a number of decisions that make this game a chore rather than a delight. 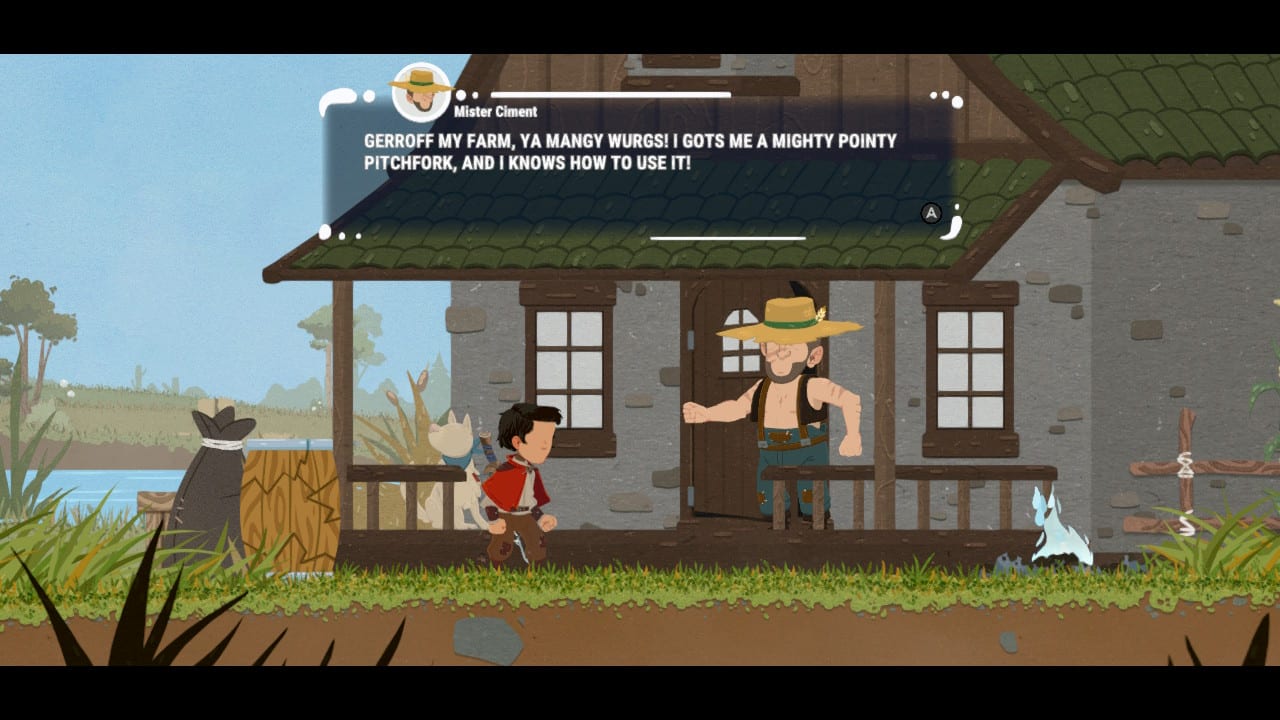 Legends of Ethernal opens with a scribe detailing an event known as the Uncovering, which gave way to the Dark Fall. The world of Arkanys is all but ravaged, and this tale acts as a prequel to these events. You control a boy named Wilfred as he tries to find his parents, who have been kidnapped by a mysterious presence. While trying to find them, he’ll have to exterminate various creatures using weapons he finds along his journey. It does seem like a generically simple “boy goes on adventure to save parents” plot, but from the first boss something seems… off about the narrative. I won’t spoil the later details, but when I’m reminded of an Undertale genocide run within the first two hours of the game, I can tell that the developers put a lot of thought in making the story familiar yet unique.

Unfortunately, while the surprisingly dark story is a welcome surprise for the game, the main gameplay design is not. Touted as a 2D adventure platformer inspired by games like The Legend of Zelda, I can see what Legends of Ethernal wanted to do with its mechanics. Unfortunately, the overall execution of the game is poor and frustrating, and on more than one occasion I was amazed at how much of a chore multiple sections became due to these mechanics.

Wilfred has a health bar and a fishing rod as a main weapon (you’ll encounter more main and sub weapons throughout your journey) which can land some basic combos. Your consumable items and weapons use ether (red, blue, yellow, and green), which you can obtain by defeating enemies and destroying certain objects. Upgrading the main weapons can give you special moves which will use your blue ether, and things like potions and sap grenades will take the other three colors based on the type. You have a dodge move that operates on a cooldown meter, so you can’t spam, and you’ll constantly take damage unless you can move out of the way of attacks. 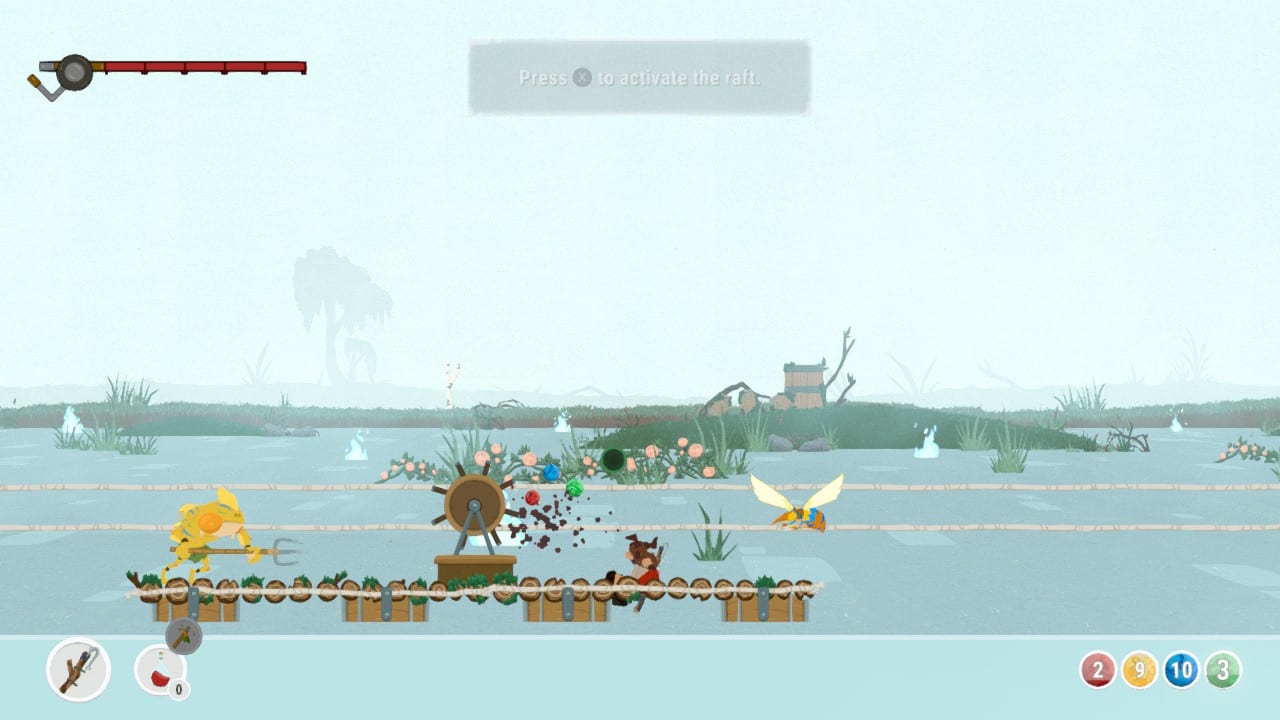 While you can die relatively easily, you’ll respawn at the last campfire you explored (these act as autosave points and give you some or all your health back depending on if it’s a blue or red fire). For younger players or those who want to experience the story or want a challenge, there are five selectable difficulty levels you can choose at the beginning of the game. However, it doesn’t really matter because even with this in mind, the majority of platforming and combat is an exercise in frustration.

At first, the issues nag at you as an annoyance; ether is simultaneously scarce yet bountiful, in that you won’t be able to store much of it until you can find hidden ether pouches that will increase your maximum capacity. Even with these upgrades, it takes a lot to take advantage of your consumables, since you might only get a drop or two of ether when you defeat an enemy. 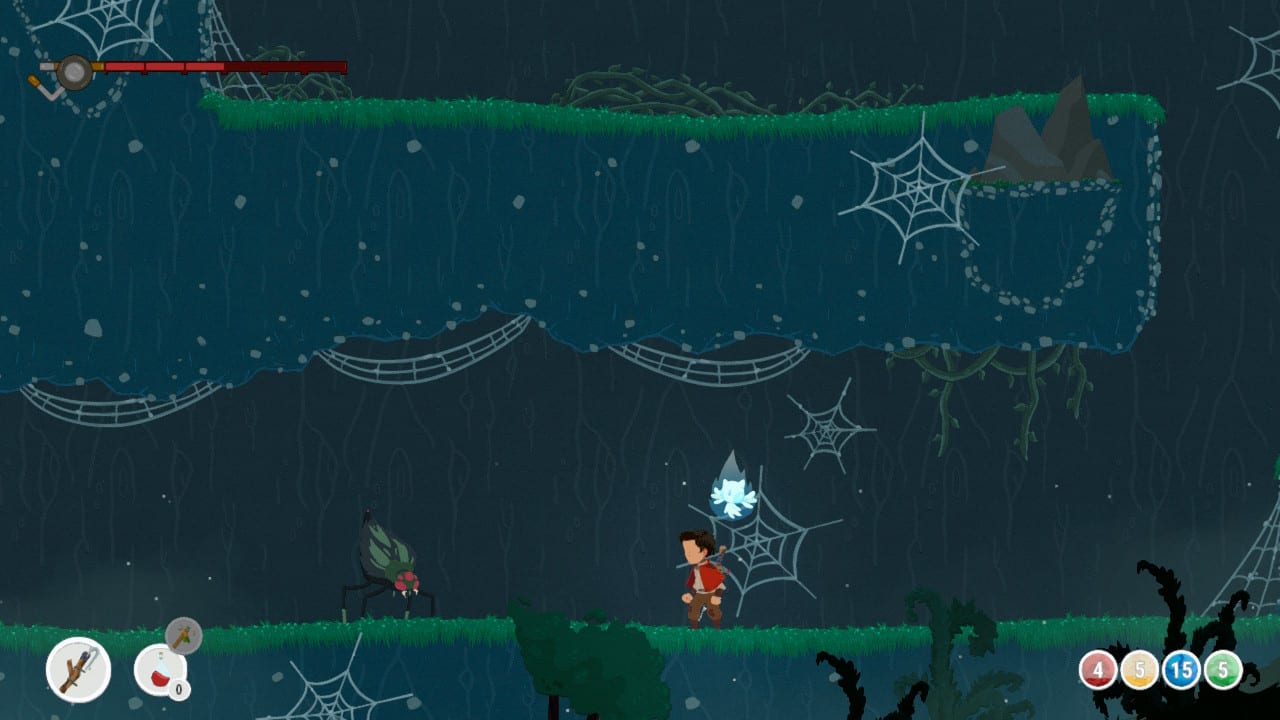 This means you get drip-fed the ability to heal or attack with sub weapons, which means you’ll need to rely on your main weapons to get the job done… except that all of the main weapons are terrible in range and power. While each weapon has its advantages and disadvantages (the fishing rod is fast but weak, while the club you get later is the opposite in stats, for example), they all do piddly damage even with the all-rot potion boost (which can poison your enemy and increase your attack power). This wouldn’t be a problem if hit detection and range were adequate, but it seems every enemy can attack you wherever you are. The enemies continually respawn when you enter or exit an area, with only ether drops being an incentive to brave the onslaught. When even your run of the mill mosquito enemy can be a demonic spider (i.e. an enemy that is numerous and can kill you quickly), it makes traveling paths quite monotonous with a high-risk, low-reward approach. 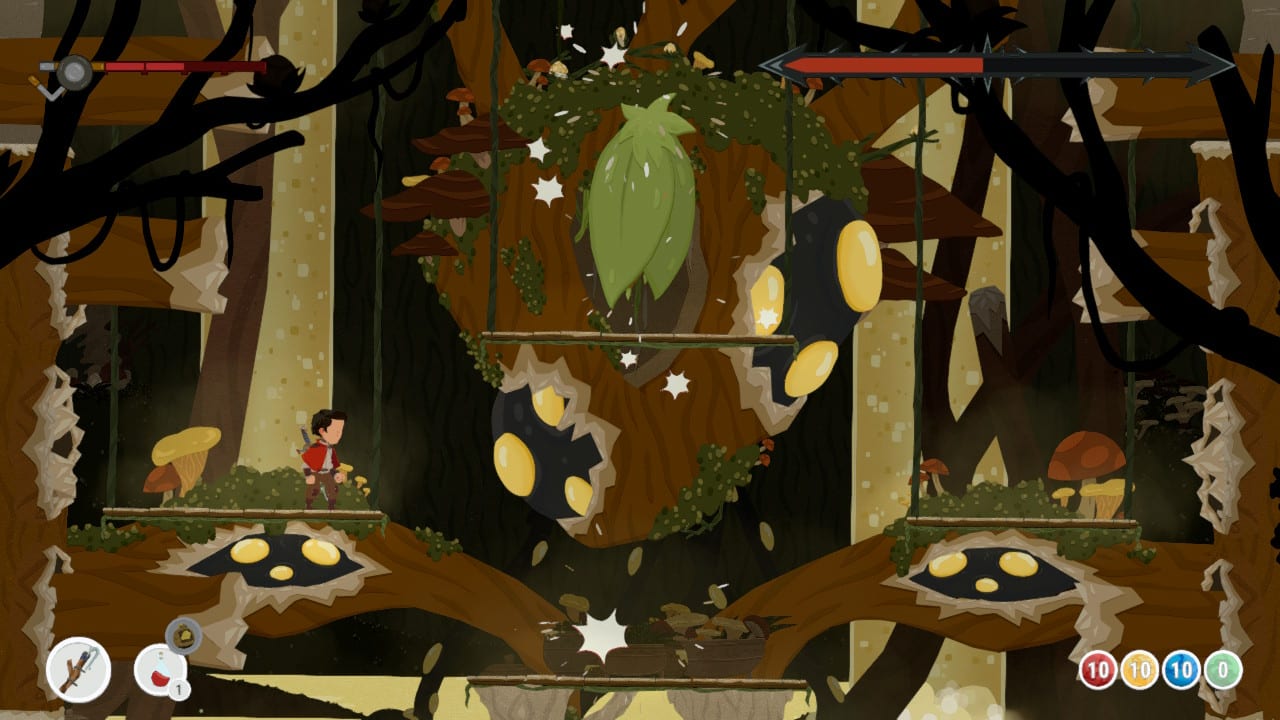 The boss battles are no joke either, but mainly because of its cheap difficulty. Each of them has a straightforward method to winning the fight, but getting this is infuriating. For example, the boss of the second area, the Bruwig Matron, requires that you use your arrows to hit a lever in order to hurt her with blocks in the arena. 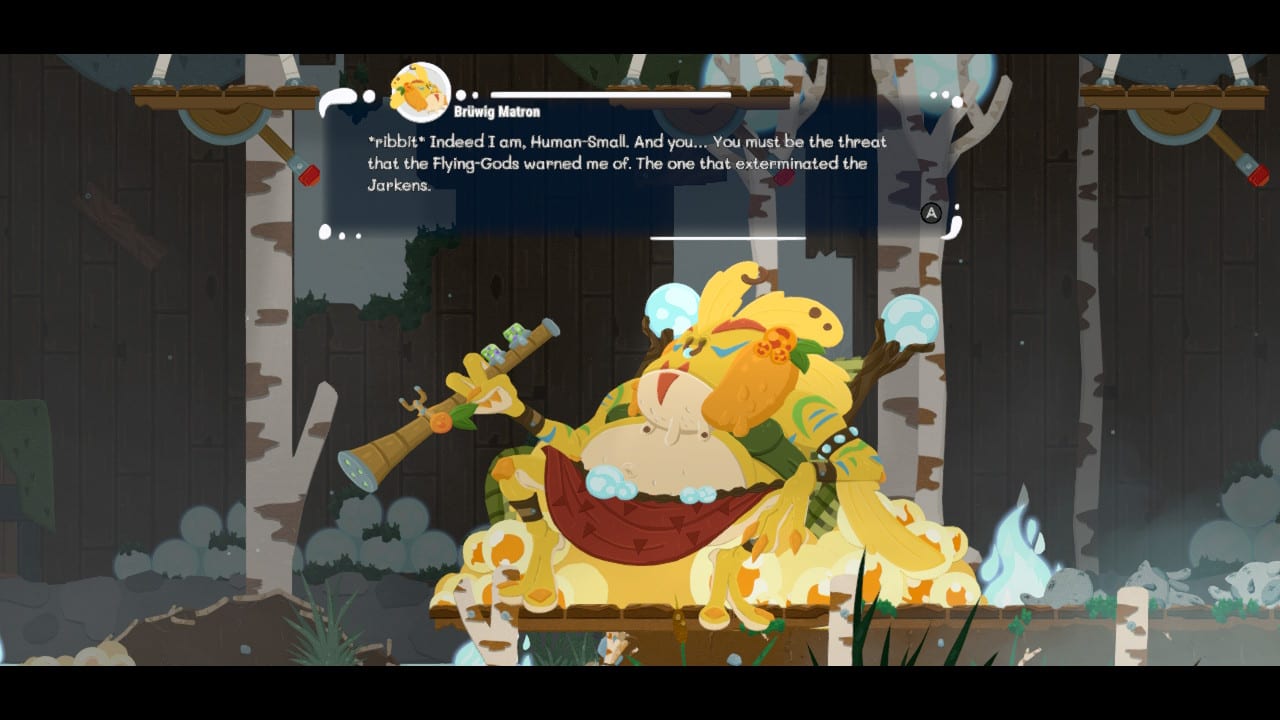 However, there is an onslaught of enemies that will beat you up in the interim, and they pop up in literally the worst places because it seems they predict where you’re going to be; dodge one of them and another pops up where you finish your move. This would be fine if your dodge move cooldown was quicker, but it’s just slow enough to be dysfunctional and the reason for a few cheap deaths. Oh right, and the Matron can use her acid attacks to make your life a little harder. Mercy invincibility, you say? What’s that? If you get trapped in between two enemies here, say goodbye to at least two hit points! Basically every boss battle is this frustrating, and I felt less motivated to continue with each death I experienced.

It’s a shame that the combat is so clunky and the platforming is less than stellar, because the game looks gorgeous. I didn’t experience any framerate dips, and the 2D minimal style works well with the overall product. Legends of Ethernal is a planned first installment in what will be a series of games set in the world of Arkanys, but with the broken combat and unsatisfying secondary mechanics, I feel like this needs to be in the cooker for a bit longer.

Legends of Ethernal sports a lovely art style and surprisingly grim story, but unfortunately the main mechanics, clunky combat, and frustrating gameplay design make this a tale of mediocre myths rather than one that soars.

Elisha Deogracias is an aspiring accountant by day, freelance writer by night. Before writing for Gaming Trend, he had a small gig on the now defunct Examiner. When not being a third wheel with his best friends on dates or yearning for some closure on Pushing Daisies, he's busy catching up on shonen manga and wacky rhythm games. Mains R.O.B. in Smash. Still doesn't know if he's a kid or a squid.
Related Articles: Indies, Legends of Ethernal
Share
Tweet
Share
Submit