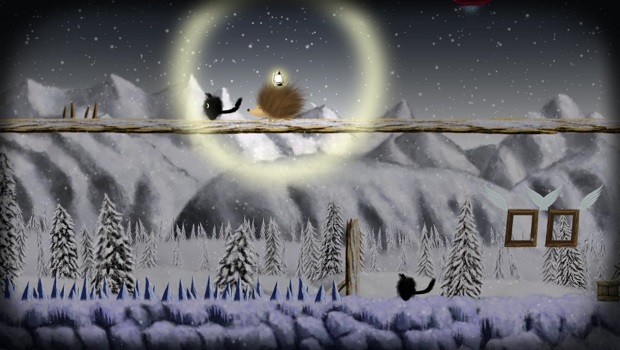 Puzzle games were made for handhelds. Professor Layton, Zero Escape, and Box Boy are franchises that have thrived on (and in the last case, were created for) the 3DS, and with the Nintendo Switch, there remain some great puzzle experiences with games like Puyo Puyo Tetris and the upcoming port of Rime. The market is relatively new for independent Switch titles, so Wish Fang’s I and Me isn’t up against many puzzlers right now. However, is this independent puzzle game worth your time, or should you wait for something else to pop up?

Previously released on Steam, I and Me holds a pretty basic premise: you control two cats as they simultaneously move together, with every jump one cat makes being mimicked by the other. Scattered across the 90+ stages are two picture frames, where you must position the cats to fit inside in order to advance. However, you can’t control each cat separately, and if one cat collides with an obstacle or drowns, you’ll have to start the stage from the beginning. The key to completing stages is coordination of the two cats, as well as some quick thinking in dodging enemies.

The story is… well, it’s there. While the narrator isn’t shown, the story proceeds through sentence vignettes before each stage. The stages are grouped into four different seasons (representing winter, spring, summer, and fall), and the story develops as you advance through them. I can see that the game is aiming for philosophical waxing with its questions of “If there were another me, observing myself from the perspective of a spectator, how would I regard another me? How would I get along with the other me?”

But that’s just the problem. It’s such a condescending and benign story that spends less time world building and more time focusing on the mopey musings of our narrator. The only thing that really had me engaged with it by the end was reading the narration in Lumpy Space Princess’s voice, and even that was kind of dull. By the end of the tale, nothing gets accomplished, leaving your efforts for naught as you feel invested in neither the storyline nor the kitties (The infodump-esque end screen and emotional one-woman wail theme doesn’t help matters). It’s a narrative-driven puzzler that botches the narrative part, and in the end left a sour taste in my mouth.

…See what I mean?

The presentation, on the other hand, is inoffensive and serviceable. It doesn’t do anything to wow you, but it’s not terrible, and each season is distinct enough that the setting doesn’t feel too repetitive. The soundtrack isn’t spectacular, but it does complement the overall theme of the game, and acts as a serene accompaniment to the whole picture. The cats themselves are cutely animated, and you can see their fur glisten as they move left and right; the graphics gain no advantage in docked mode, but at the very least there were no framerate drops when switching between TV and handheld mode. The way I and Me looks isn’t worth writing home about, but how does the actual game fare?

The gameplay is a tad better than the presentation, but it’s still underwhelming. While I did like the “mirror parallelism” concept that was explored within the seasons, it ends up being frustrating since the distance of the kittens can’t be controlled directly. The distance can be affected by either hitting a wall and forcing the kittens apart, or through other techniques where you must manipulate the environment to change this indirectly. It unfortunately means that you’ll be out of luck if you accidentally over or undershoot how far or close you need your kittens to be in order to fit the picture frames. While it’s easier to simultaneously control the cats with one control stick rather than two ala Death Squared, the unfortunate result is that the whole thing feels constrained and restricted. Movement is clunky, and you really don’t know what you’re doing for most of the ride, so expect to experience a few deaths because of trial and error gameplay rather than a failure in deductive reasoning.

However, I did appreciate that I and Me does take advantage of its unorthodox controls through different gimmicks that appear throughout stages, like sheep you can bounce on or a magic wand that reverses the direction of the kitten that jumps into it. Also included is a hint function that nearly solves the stage for you, though you’ll need to complete it yourself and later stages only cover the first few steps of the solution. It’s an accessible (and optional) touch that will ease younger players into the game, and it’s reminiscent of the hint system in Professor Layton games. There are some innovative concepts present that should have been explored further; the game could have been fleshed out to be a little longer and I wouldn’t have minded.

That’s because the whole affair is over within a couple of hours, with no replay value once you reach the end. While most puzzle games are like this by nature, I didn’t feel like I wanted to go back to this game once I unlocked the hidden puzzles — which open up once you collect pages scattered across certain stages — that show more of the story (and require you to think outside the box on said stages). Had this game been padded out with more of the innovative mechanics with which it began, I could forgive its length and lack of replay value, but as it stands, it’s very disappointing. 90 levels seems like a nice, long package, but since most stages end in less than a couple minutes, it feels like the game breezes through them. The puzzles themselves aren’t spectacular, and the solutions are relatively easy to figure out.

I and Me stands out due to the fact that the Switch library doesn’t have too many puzzlers right now. However, a pointless story, frustrating mechanics, and disappointing length mar a game with lofty ambitious.

Elisha Deogracias is an aspiring accountant by day, freelance writer by night. Before writing for Gaming Trend, he had a small gig on the now defunct Examiner. When not being a third wheel with his best friends on dates or yearning for some closure on Pushing Daisies, he's busy catching up on shonen manga and wacky rhythm games. Mains R.O.B. in Smash. Still doesn't know if he's a kid or a squid.
Related Articles: I and Me, Indies
Share
Tweet
Share
Submit