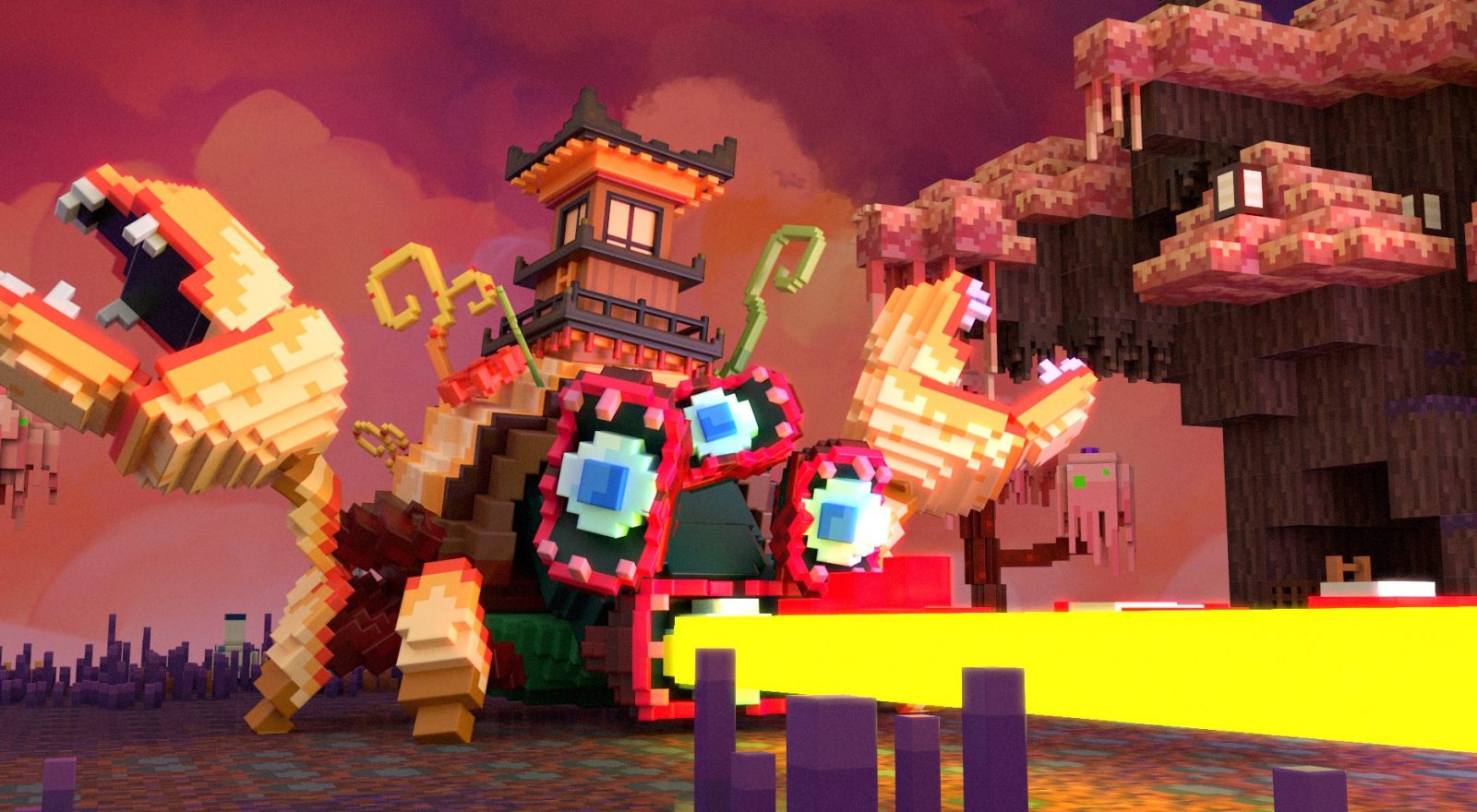 Throughout the years, most dungeon crawlers have taken on the same look and feel, offering nothing new to their genre. Often wanting to capitalize on what’s been established by their predecessors or competition, most dungeon crawling action games are alike – except for this pixelated one. With the style of Minecraft and the simplistic controls of a typical top-down hack- and-slash action game, Riverbond smashes the stereotypes of what a dungeon crawler should be. Sort of.

Riverbond, visually, offers an experience that’s refreshing, alone or with three other friends in couch co-op. I can’t stop praising Cococucumber, the developer, for making this game couch co-op. With its pixelated, voxel art style that allows you to basically interact with and destroy anything in your path, its action focused style of play never seems to be bound by basic physics. Aside from its action and old school objective-based missions, there’s an abundance of skins and weapons throughout your playthrough to collect. Now, my experience with the game is mixed. On the surface, the game appears to want to offer more than your typical dungeon crawler or action game, but as I played through the levels, I immediately felt as if Riverbond showed its hand too early – and it was a losing hand. Allow me to go into further depth. 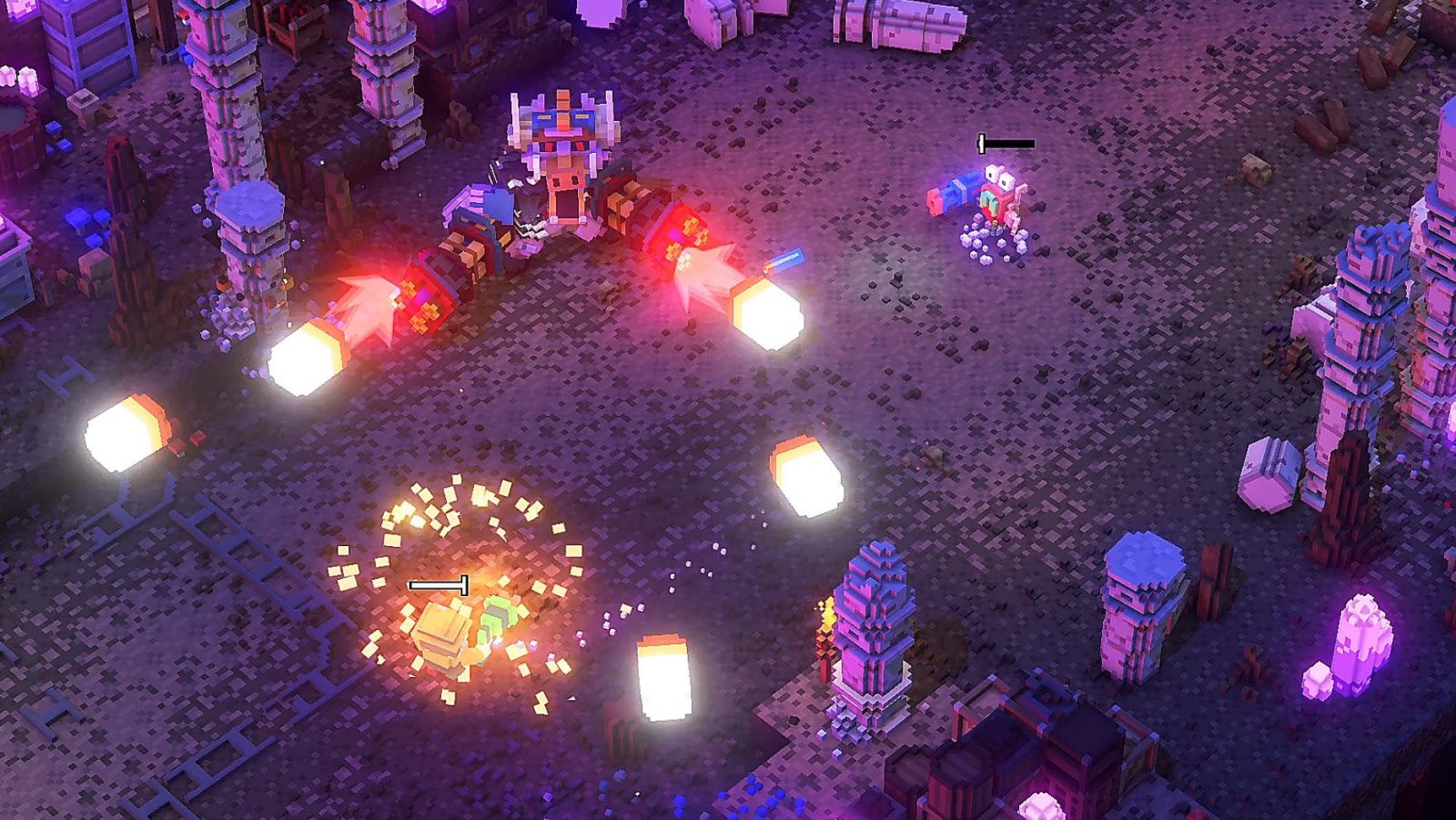 On the main menu screen, you’ll find the typical options: play, tutorial, options, and an option called King’s Garden. The tutorial itself is a very quick and basic run through of a level, where you walk around the world and come across instructional bubbles that tell you to press a button for a specific action. That’s to be expected. With the King’s Garden, I was excited to see if the developers had come up with a creative place where all players could interact and play with one another – I was wrong. From what I could tell, it’s simply a medium-sized level where the possible skins you could collect in game are shown. NPC stroll around the area like a model showing off a designer’s new threads for the season. If you’ve unlocked the skins in-game, you can walk up to the NPC and swap out skins on the fly – if that’s your thing. Though there are a few chests to open and collect skins for yourself before you jump into gameplay, it was a disappointment to see that this was all for show in a dungeon crawling action game.

Choosing the play option will take you to the level select screen where you can choose from nine different levels in any order. Once chosen, you are given the chance to choose which skin you want to play with, not that it matters other than for a stylistic sense. The different skins offer no perks to enhance yourself or buff weapons, sadly. Once you have decided on your look, you’re immediately met with a beautifully crafted level that is purposefully built for its objective. I say that because the levels are not open world and offer no more room for exploration than a New York apartment. Many of the chests and hidden items are in plain sight, so there’s little to no room to search the levels. The colors are rich and make it easy to distinguish elevation and changes in textures, especially in a game that uses this art style. Before you start the mission, you’re usually greeted by a creature of the world who asks you for help. They will fill you in on their life, your objective, and what threat has come to dismantle their peaceful world. The first level teaches you the basics on how to navigate the levels, collect weapons (some more useful than others), and skins. If the objectives of the levels were to only collect skins and weapons, this game would have been a perfect ten. But it offers little else than that. 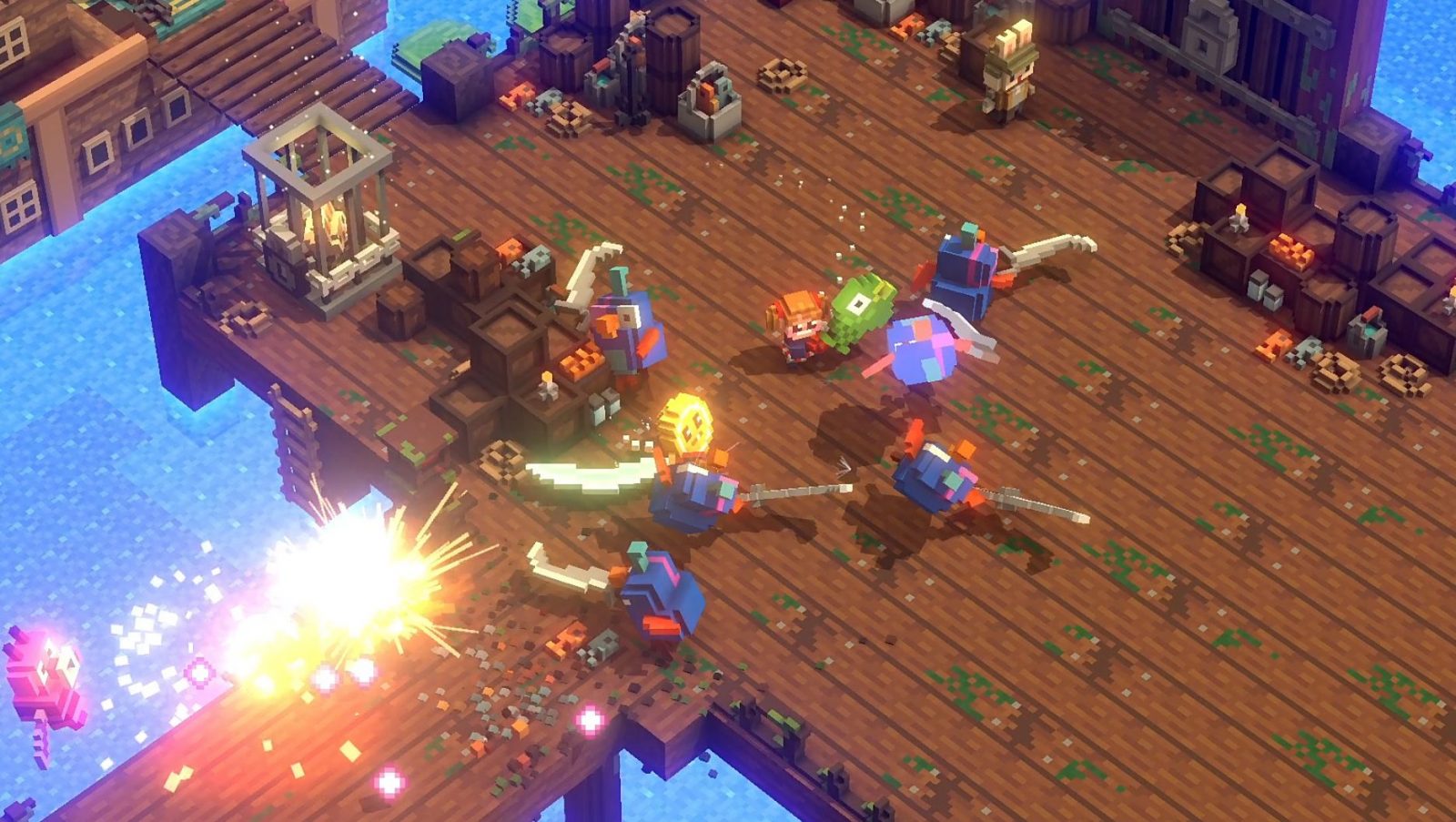 With most dungeon crawlers, the enemies are plentiful, and some are tougher than others, but Riverbond simply uses one type of enemy per level, and they are all the same. Occasionally you’ll come across a larger enemy of the same type who requires a few more hits. But that’s it. With each level, you start with a standard sword which works in every situation. Like skins, the weapon choices in the game are over the top and in abundance. From claws, pirate swords, guns, orc hands (think Hulk hands), cinder blocks, lollipops, etc. there’s no shortage of weapons to beat pigs, gators, werewolves, and snakes over the head with. I found the weapons incredibly imbalanced and useless in some situations. The guns offer the least amount of damage, which makes sense as you can fire rapidly from a distance, but the weapons that forced you to be extremely close to cause damage offered little reward. I typically stuck with a long sword or axe because it offered great striking distance with little to no cost of me getting hit. As you collect weapons, you never know what the DPS is a weapon is until you equip it and strike an enemy.

Slicing and dicing your way through the levels, you can easily complete objectives in as little as seven minutes, and each level has roughly five different objectives, typically all the same. Many of them are to save captives from invading pirates, lower the bridges in the area so they could escape, and restore the water fountains so their crops could grow. The boss battles were the most challenging as the levels were small and constrained, leaving you to fight the big baddie alone with his comrades. Defeating them would award you their skin, again, giving you no perks in the game that I could see.

Riverbond is a game that feels as if it were meant to be part of a larger and more ambitious world. It’s great for jumping into a quick game to feed your hack and slash needs throughout the day, but with no in-game saves, no perks for skins collected, and a world that offers no room for real exploration, I find it hard to want to play with four friends because the enemies aren’t challenging enough. Coupled by an imbalance in weapon damage and objectives that don’t fit the style of play, I'd say Riverbond doesn't stand out in a genre that's already crowded.

T.K. is a freelance writer, narrative designer, and author. Writing and developing narratives and giving voices to digital world and characters is his passion. As a game writer, QA game analyst, and editor for Gaming Trend, he enjoys being a part of the gaming industry.
Related Articles: Indies, Riverbond
Share
Tweet
Share
Submit