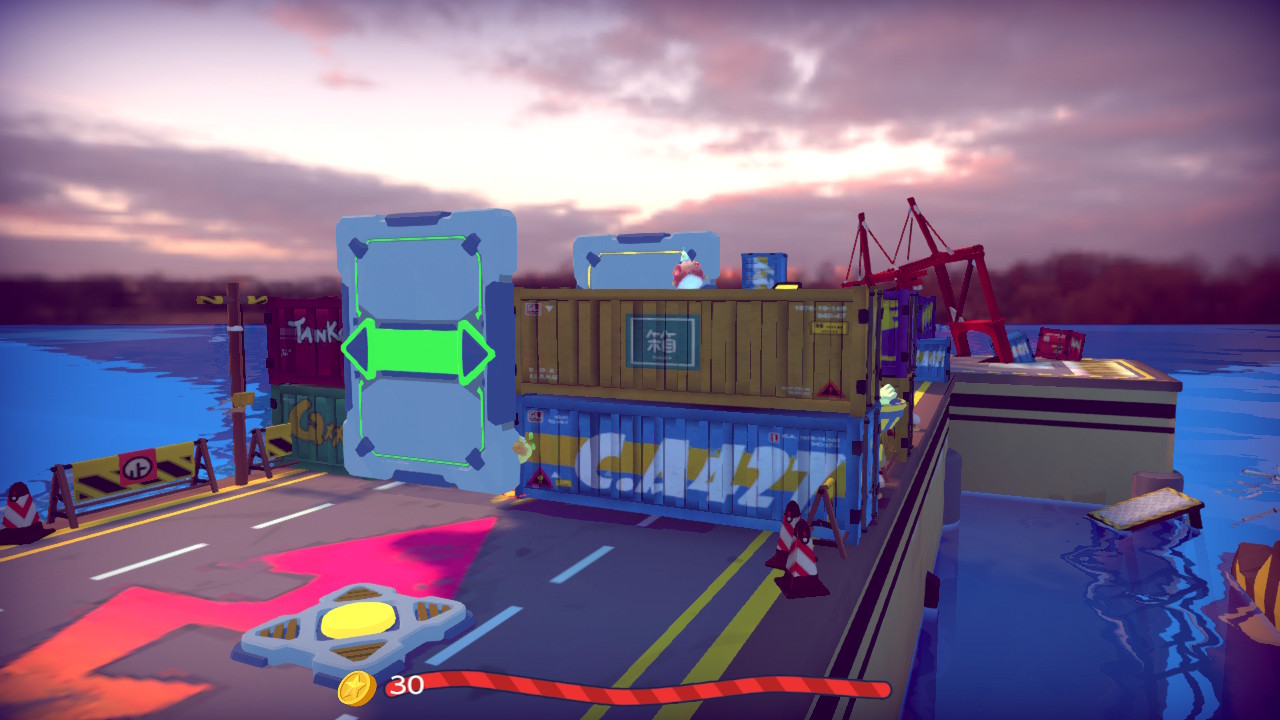 Perhaps the easiest way to create a co-op experience in any sort of medium is to literally tie two characters together with a rope. Both characters will have to work together to overcome even the most menial task together. We’ve seen several games take advantage of this concept, and I’m sad to say that Never Breakup doesn’t break any ground when it comes to this format. 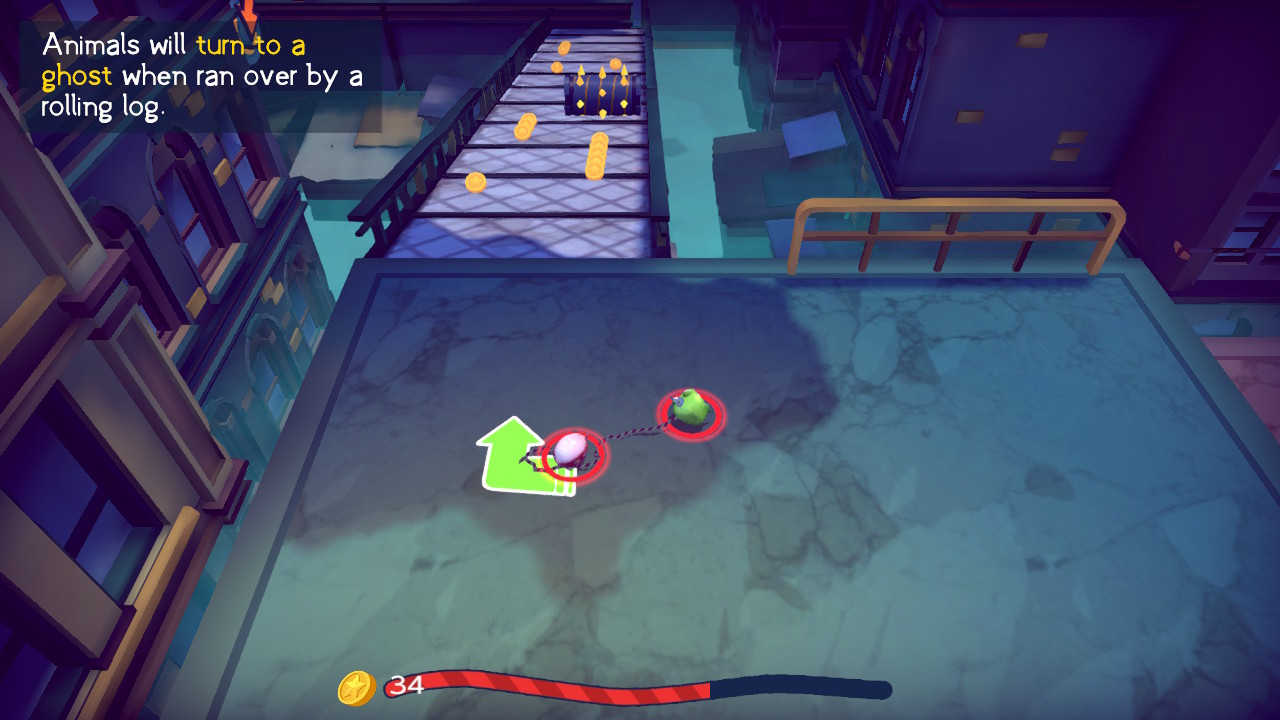 Never Breakup is simple. You and another friend each control a ball with an uncanny-valley animal design while tied together with a rope. You can move with the joystick easily, but you can also stick to the surface you’re on, grab onto the box with that same button, snap to your partner, or eat your partner then spit them out at enemies. Almost every enemy can be taken out by spitting at them.

Having characters tied to a rope doesn’t really add much to the game. If anything, it serves as a limitation as to how far away the players can be from each other. Most of the puzzles involve pushing a button and racing to the door before it closes. One player has to be ready to grab onto the floor at a moment’s notice because one of the players falling will easily bring the other down with it. 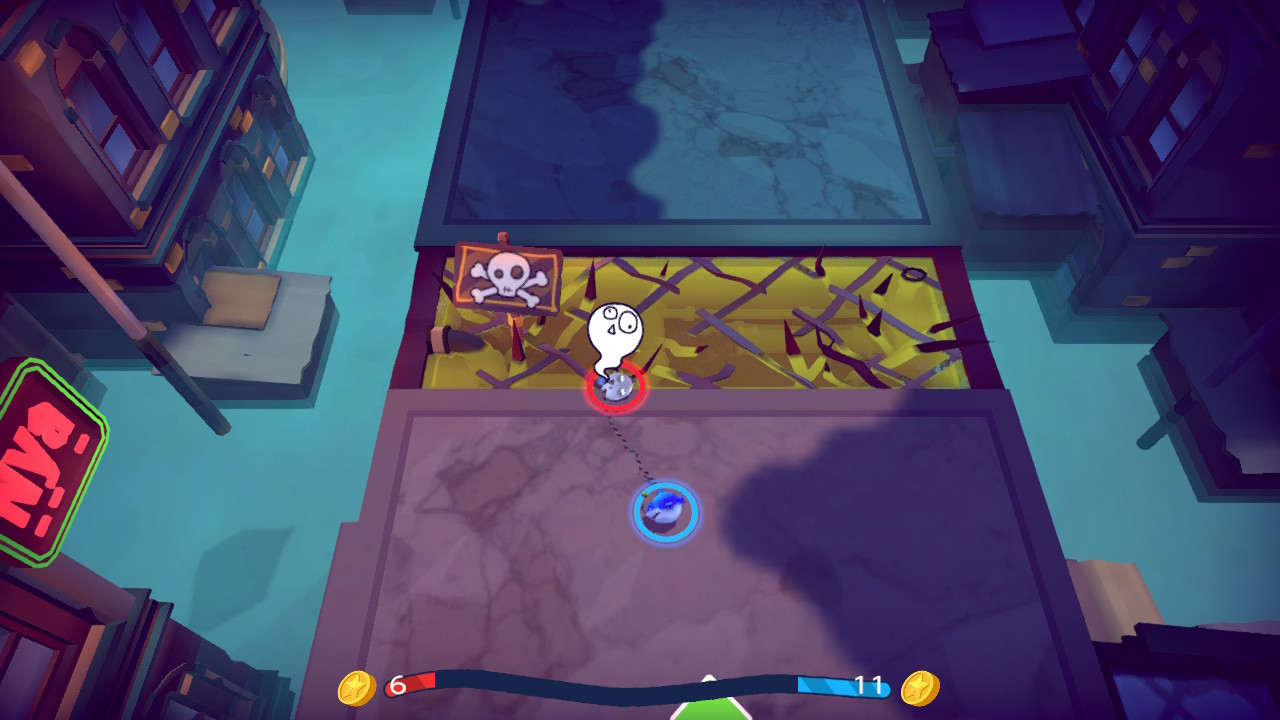 Hitting a deadly obstacle will turn the player into a ghost, who will be revived after a few seconds.

Besides the simple puzzles, there are a few platforming segments. Included with these are moving platform segments, which occasionally move faster than your character, or make your character roll backwards, leaving you to constantly reorientate yourself. These segments are primarily about jumping to other moving platforms or avoiding obstacles. Even being hit once will turn the character into the ghost, and when both are dead at the same time, it’s back to the checkpoint. There is no indication that you’ve passed a checkpoint, so it’s luck to see if you’re starting from the beginning of the stage or the beginning of the spot you were at. 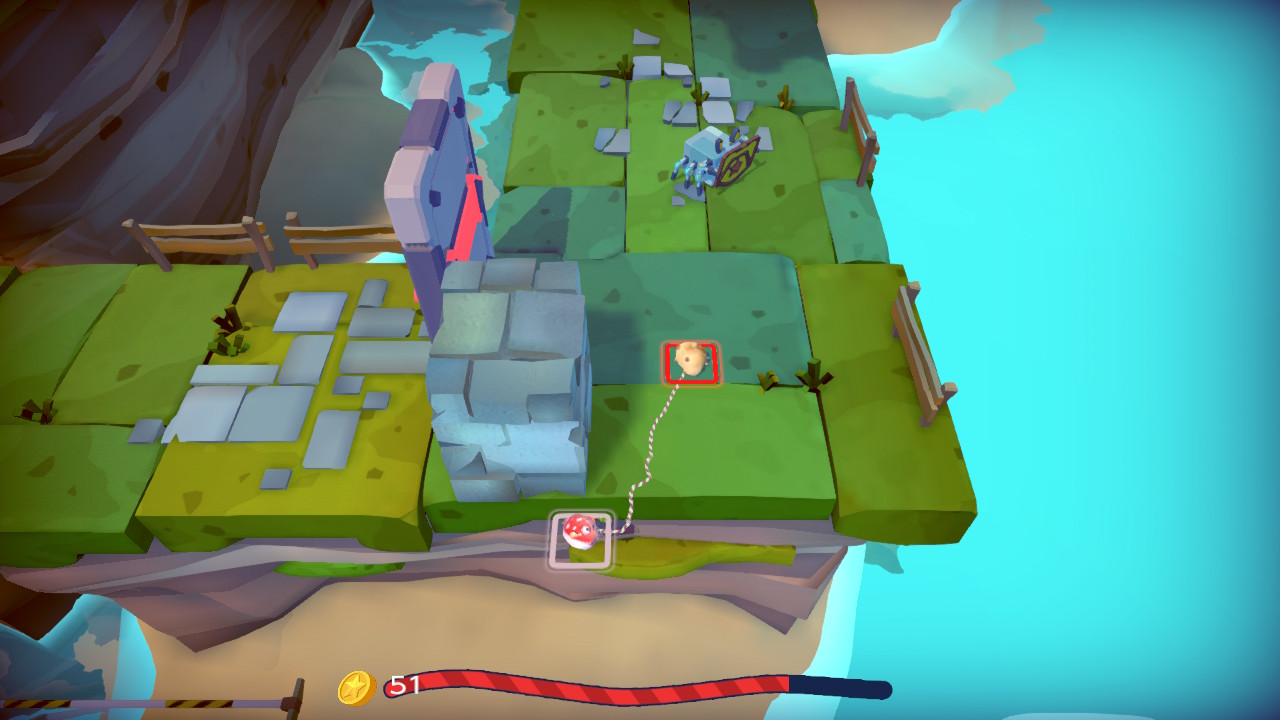 That’s just one of the many instances where the game’s lack of polish “shines,” for the lack of a better word. When playing alone, you have a button that switches between the two characters and a button that allows you to control both of them. While playing alone, I found ways to break the levels easily. Most of the doors you come across can be broken through, though this will often leave you with a glitched out abomination. 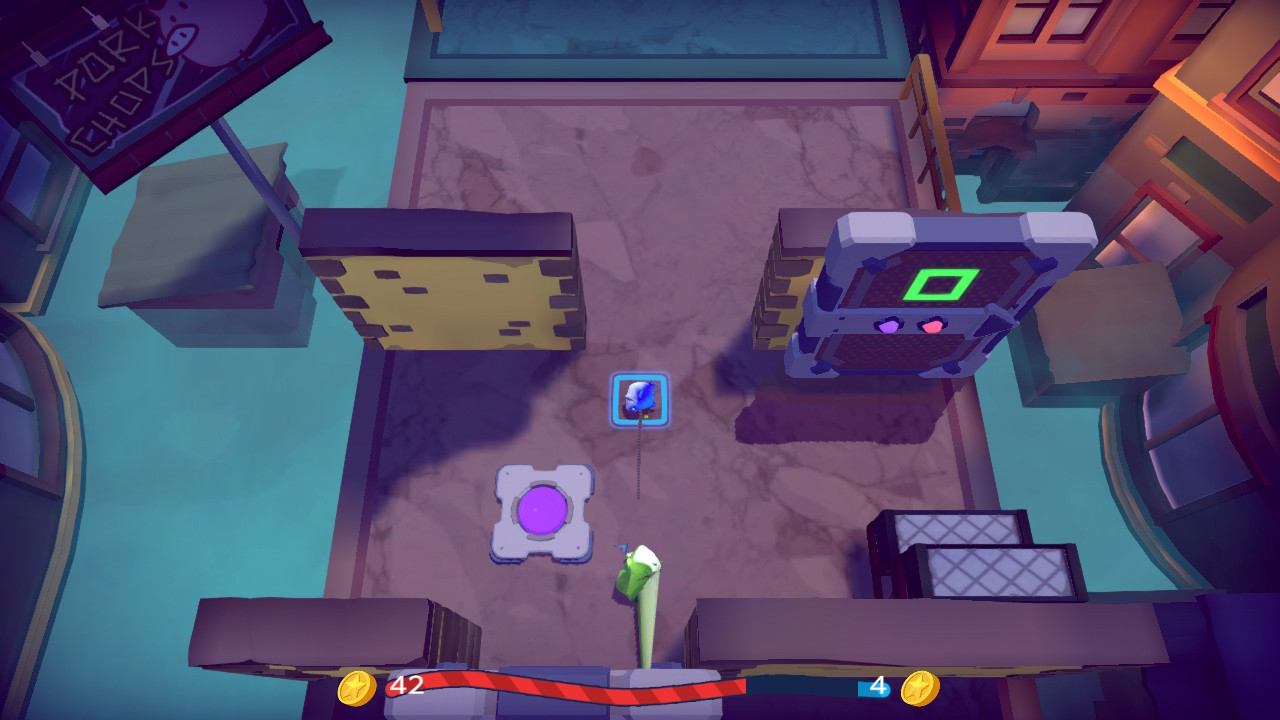 With just one person passed the door, we could have the other player mash the button to retract the rope, but things started to get… weird.

Wonky physics aside, it feels like some of the platforms weren’t given the care they needed. Disappearing platforms literally poof out of existence after a few seconds. When a character dies there isn’t any weight to it, and the main collectible spins quickly before disappearing out of existence as well. All of this feels jarring to witness. 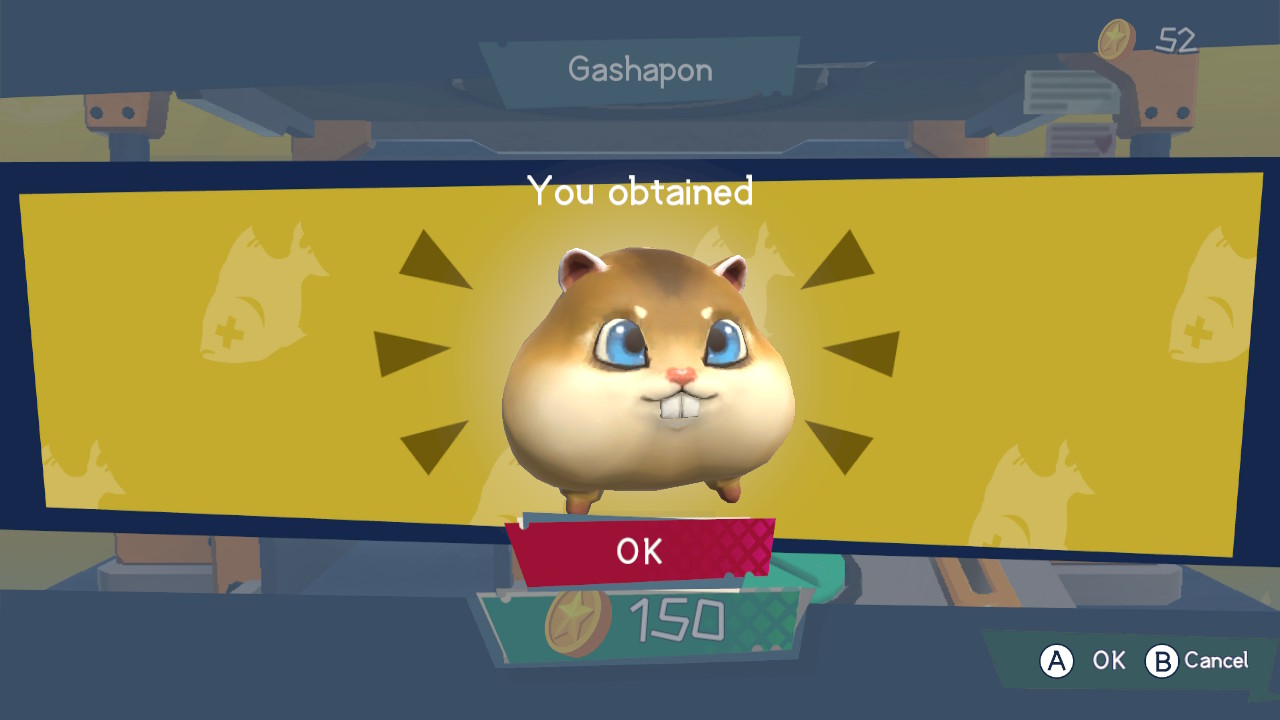 150 coins for the chance to get a new character, but you’ll most likely get something like an ice cream hat.

There are two main collectibles: coins and noodle bowls. There is one noodle bowl per level, and they’re used to unlock minigames to play with up to four people. Coins are scattered throughout the level, and there isn’t an incentive to get all of them. All of the coins you collect are cumulative and you can spend 150 in a gachapon machine to get new characters to play as or accessories to put on your character that are too small to see properly. This means that there aren’t any meaningful collectibles in the levels; you just grind to get coins to put into a random chance machine. It makes receiving a reward feel unrewarding. 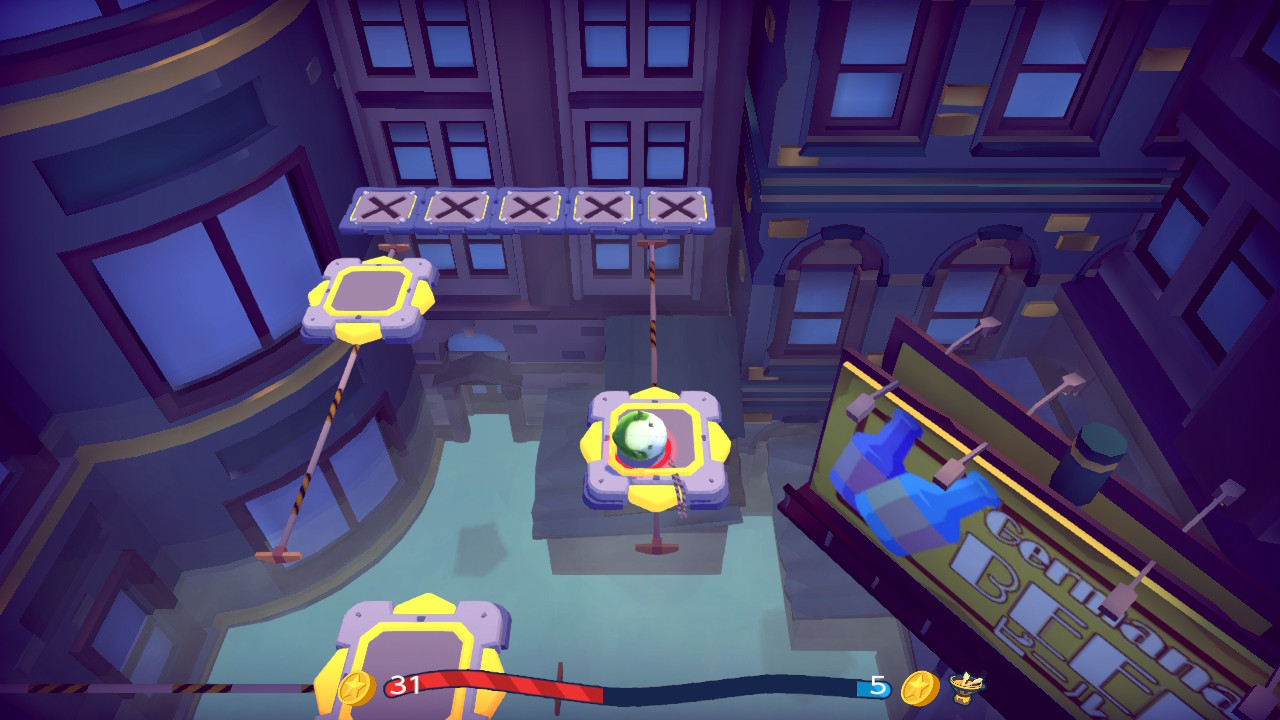 It’s easier to eat the other player on these moving platforms. There are far too many segments where you’re waiting on a moving platform and with two players it’s a frustrating experience.

The biggest problem I had with Never Breakup is that it doesn’t really have much going for it. The tied together characters aren’t used in any imaginative way, nor are they designed in a way to lead to fun experimentation. The most fun I had was seeing how I could break the levels further or solve puzzles without the intended solution. I even changed the controller schemes on two joycons so I could control each character independently on my own. This was a fun challenge, but I ended up eating one of the other characters to get past frustrating obstacles. 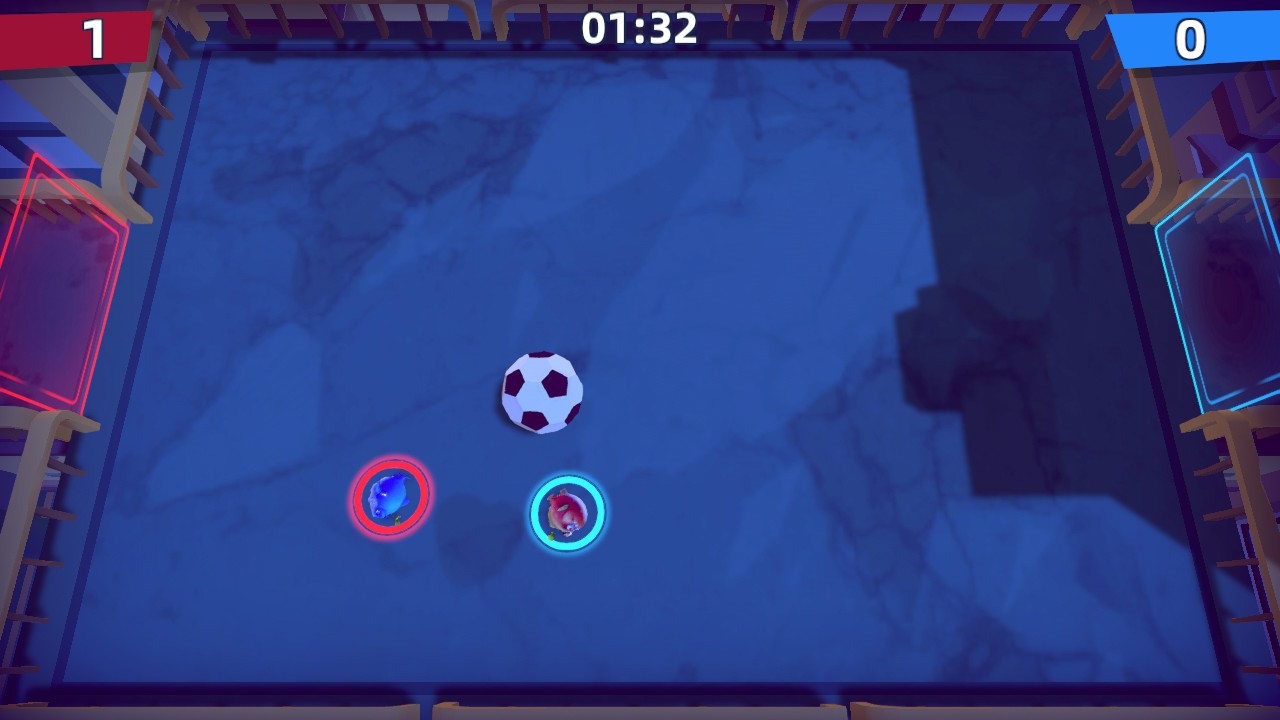 You can understand exactly how this game works just by looking at it. There’s nothing special about it.

In order to play the actual four-player party games, you have to unlock them by getting four of the main collectibles found in each level. These party games feel tacked on and have little to do with the main mechanic of the game. In the soccer game, you roll around and knock the ball into the goal slowly. 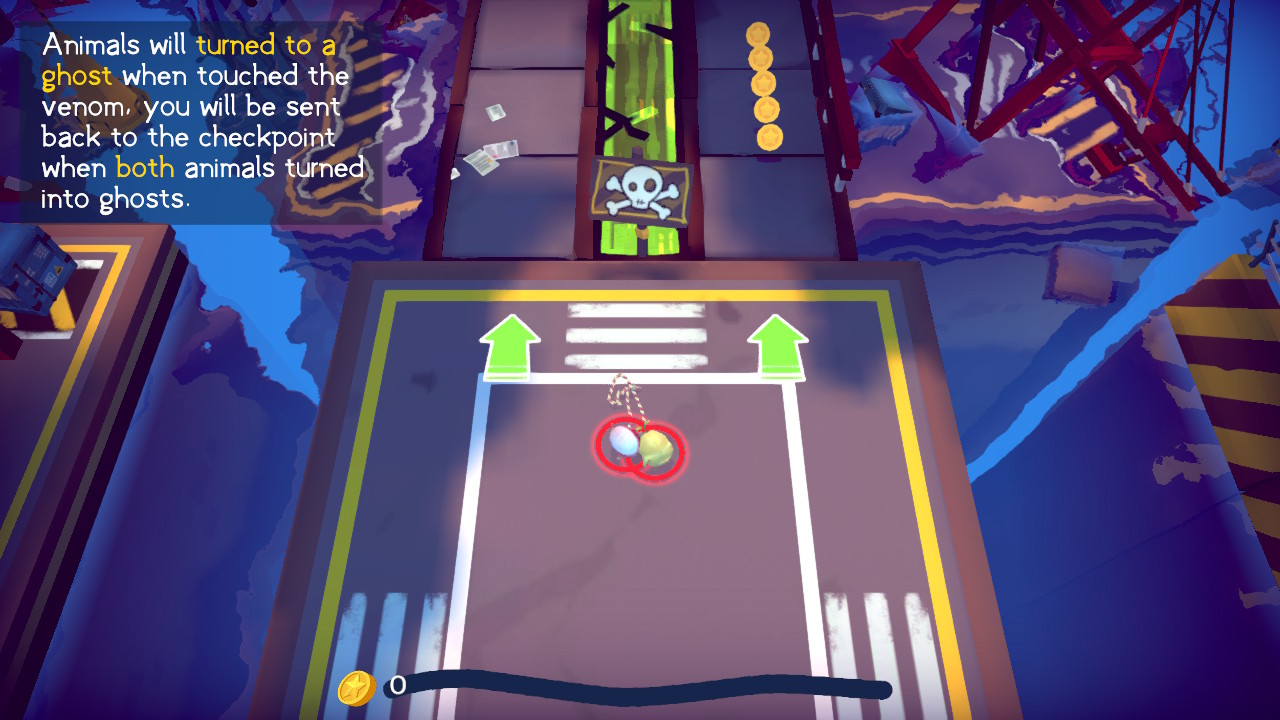 The wording is incredibly awkward, and this isn’t the only example of a questionable translation.

I cannot recommend Never Breakup. While it is on the cheaper side, it’s not the fun co-op distraction you’re expecting. The levels are bland, the physics are wonky, and there’s a level of polish non-existent even down to the translation. It’s the direct-to-video knockoff of a concept already done well in other co-op games.

Never Breakup is an attempt at a co-op game without the excitement most party games bring. The rope doesn’t add much to the experience, it’s slow paced at the best of times, and it lacks polish. If you're absolutely starved for a tethered-together title, you may enjoy it briefly, but this isn't a party game I'd recommend.

Sean Anthony likes to combine two of his passions: gaming and writing. Gaming has been a huge part of his life ever since he played his first game as a child, Kirby's Adventure. He aspires to have his name attached to an article that makes the whole world go, "Huh, that's neat, I guess."
Related Articles: Never Breakup
Share
Tweet
Share
Submit