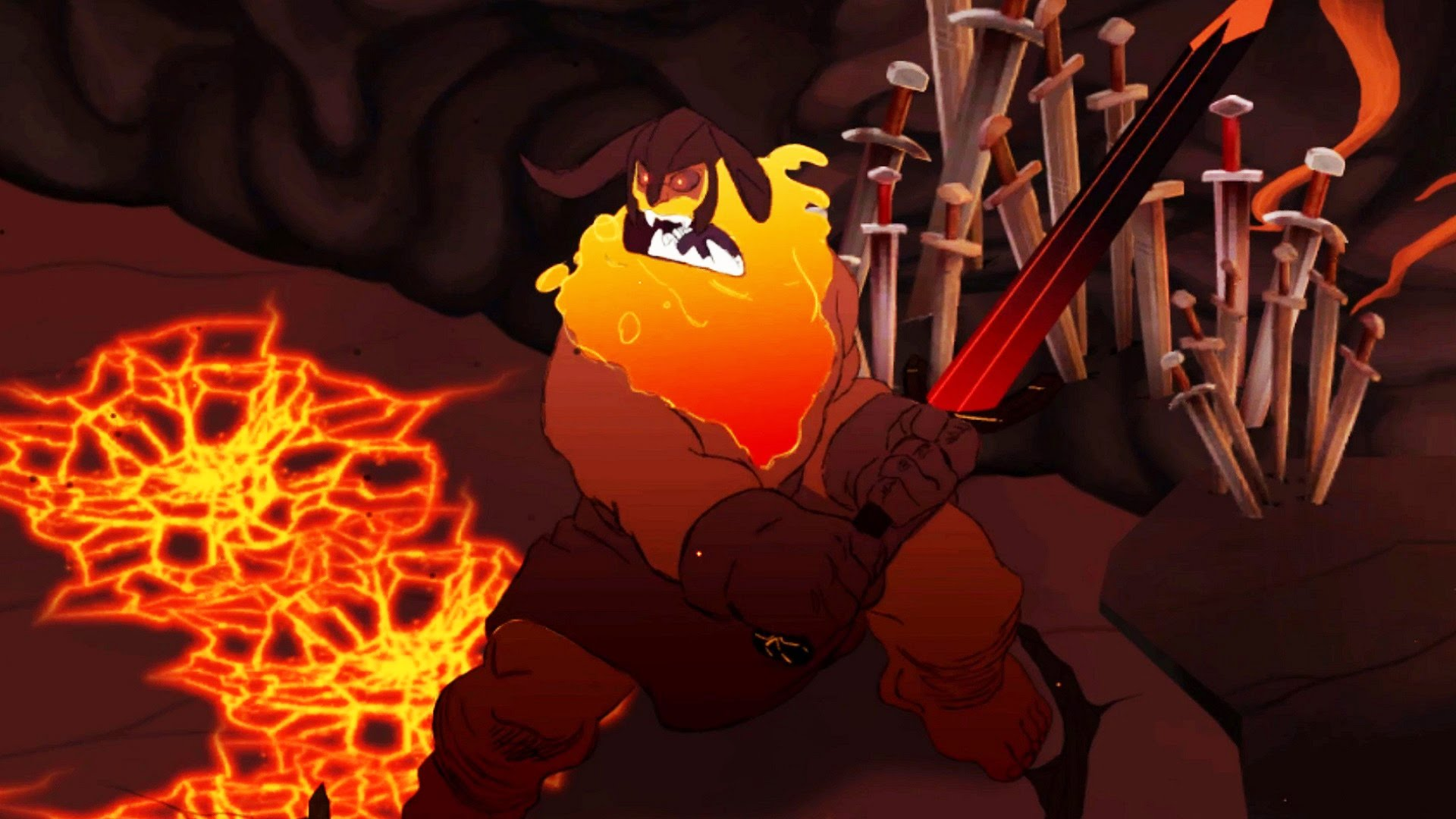 Since Jotun was released on PC in 2015, there have been a handful of games that have done impressive things with 2D art and animation. Thunder Lotus Games, the developers of Jotun, released Sundered in 2017 that evolved some of the concepts Jotun pioneered. Then Cuphead came along and used its art style to sell the overall tone to great effect. Even with these newcomers, Jotun’s release on Switch has only reinforced the strength of that original art design and hand drawn animation.

Rarely is Thora this close, but her hand-drawn style is consistent with all the art in the game.

You play as Thora, a woman whose life is defined by her father naming her for the god of thunder. Hers is a journey for acceptance and validation, the former from her father as a proven warrior and the latter as the younger sister living in her brother’s shadow. When she dies an inglorious death, she is cast into the void called Ginnungagap where she must again strive to prove herself, this time to the gods so that she can reach Valhalla and live up to the standards she feels she’s failed to meet.

You explore the five areas inside Ginnungagap that each house a different jotun, enormous elemental giants that reside at the end of the areas you’ll be trekking through. Exploring the varied environments can be interesting, and is often breathtaking, but where the game falters is in providing a compelling gameplay reason to navigate these areas. It mostly serves as a distraction where you can find useful new abilities for use in the boss fights. Once you’ve taken in the art–which, admittedly, is striking and unique in each area–it begins to wear on you as you slog through the maze-like levels with little to do outside of avoiding environmental hazards.

It’s a shame because Jotun’s ability to scale its art from a close-up on the player character to an enormous vista or towering boss encounter that dwarves her on screen is stunning. It is those boss fights against the titular jotun that make the game worth playing though. Outside of their impressive stature and incredible animation they all offer a fun and finely-tuned challenge.

Even though she is barely visible, you never lose control of Thora.

In combat, Thora has a light attack, a heavy charged attack, and her god abilities that you’ll unlock by praying at statues of the gods. Fighting the more difficult bosses is a culmination of your ability to utilize all of those mechanics while also wrestling with the dangers all around you in the boss arena. The fights start calm and slowly build to a harried frenzy of smaller enemies and huge area-of-effect attacks that slowly whittle away at your health.

This Valhalla Edition of the game then also offers Valhalla Mode which unlocks after you finish the story. This mode just lets you square off against more difficult versions of the boss fights. If you really want to test yourself, they are truly difficult (the original versions of the fights were already tough) and the game will then keep track of how quickly you were able to best these variants. It doesn’t add much to the game, but it does provide a fun bonus for anyone looking to get the most out of those fights.

And as this is the first time the game is being released on Switch it obviously offers an entirely new way to play the game. The game is perfectly functional when played in handheld mode and the art still looks nice, but the art–especially when Thora is a blip on the screen–is much more enjoyable on a large television. The precise nature of the combat also lent itself better to a more traditional controller configuration. That’s not to say that the game is bad or unplayable when not on the TV, it’s simply that it is not the ideal way to see what this game has to offer. It is nice, as with most Switch games, just to have the option, but if you’ve played this on another platform already, then this won’t offer anything new.

Below that bridge are entire levels Thora will soon explore.

Jotun is a game that at first blush seems a bit one note. You see the art pull back for the first time and it sets the tone the rest of the game is only sort of able to deliver on. It gives you scale like a lot of games are not able to offer, and when you’re engaged in a fierce battle against Norse giants the game really comes into its own. The highs of those fights hold the lows of exploration in stark contrast. The game’s story is well told, but it feels like the game is missing something to do between the fast-paced boss encounters.

For a game that deals with this large a scale it often feels small and lifeless outside of the boss fights. It is, though, a visual showpiece that offers a stiff challenge. And while playing it on the go probably won't make this worth a return trip to Ginnungagap, it is definitely a great game to add to your Switch library if you've not checked it out before.

Nathan lives in Colorado catching Pokemon on the Go and at home. He previously spent three months interning for Game Informer before coming back to Gaming Trend to spread the good word on video games. His real passion, though, is collecting different versions of the 3DS and other weird Nintendo garbage. It's a never-ending quest for less space in his house.
Related Articles: Jotun: Valhalla Edition
Share
Tweet
Share
Submit