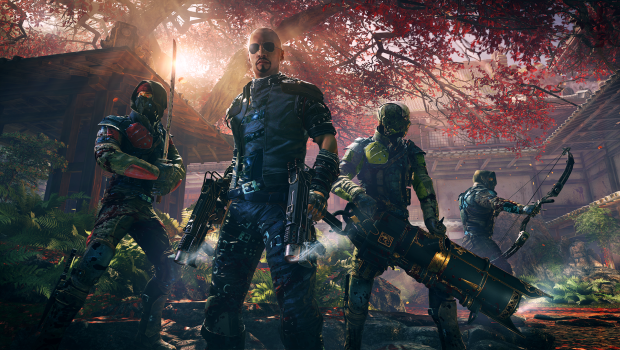 Shadow Warrior 2 is stuck between two points in time. In one, it’s the early days of Duke Nukem and Serious Sam, where rockets blew chunks of pixelated gore across the screen while beefy commandos delivered raunchy one-liners. In the other, it has to cope with the modern day, a market that has left those days long behind. Wolfenstein, Doom and Quake have all made a return in some form, but adapted – Duke, a little less so. Where 2013’s Shadow Warrior reboot succeeded in modernizing a classic, Shadow Warrior 2 falls into ruts and in some cases, even regresses.

In an opening montage, Lo Wang is tearing across roads in his sleek car, blasting some classic Stan Bush, before being knocked off-road by demons. He flips the bird, grabs his katana and drops right into the thick of matters. There’s a great deal of cheese and charm to the cheeky antics of Lo Wang at first, and as you hack through swarms of evil monsters, it’s a fairly good time.

The major overhaul to Shadow Warrior 2 is not in the gameplay per se, but in the extras around it. Enemies drop loot, and named bosses with various elemental affinities and weaknesses hold the best treasures. Outfitting your armory is a matter of collecting new guns, swords, and other weapons, and outfitting them with different upgrades to bolster their effects. Some are major, like a trinket that lets you dual-wield guns; others are less obvious in their advantages, with boosts that “reduce miss rate.”

Between swords and guns, the combat feels tight and focused. While elemental affinities and odd trinkets add variety, the core gameplay loop is still simple – find a bad guy, shoot and stab said bad guy, collect whatever drops and move on to the next bad guy. It’s repetitive, but the basics are a solid enough foundation that combat never quite gets tiring. It is, however, heavily reliant on the smorgasbord of unique tools for carnage. From chainsaws and grenade launchers to futuristic Deck-Ard plasma revolvers, every weapon feels unique and engaging. Melee combat is especially well-done, with katanas having a variety of moves and good interplay with other close-quarters foes.

Wang also has a few supernatural powers available, and these are upgraded through skill points, which you gain through combat and as quest reward. The powers range from invisibility to literally impaling foes on a pillar of pure evil, but I rarely found use for them outside novelty. Almost every major foe is immune to powers (for good reason, as the game would be a little easy if you could just impale-chainsaw every boss), which meant my skill points often went towards things I could practically and regularly utilize: ammo and health regeneration, pick-up radius for dropped loot, and other passive abilities. My chi, the resource that meters your power use, ended up being used solely for the healing power, and after just an hour or so was essentially a second life-bar. Powers are awesomely destructive when you get to employ them, but as foes gain resistance to them early on, most of the offensive become little more than a method to clear the smaller adds.

Bolstering the carnage is a beautifully crafted world, with maps and locales that look absolutely gorgeous. High-end rigs that can max out this game really show off the color, shimmer and aesthetic of the different areas, from foreboding forests to glistening, high-tech cityscapes. Though the world itself is rarely elaborated on outside optional lore entries, both the arenas and its adversarial inhabitants offer a lot of eye-candy.

Where the monotony sets in is the world, characters and narrative of Shadow Warrior 2. Lo Wang is once against the main protagonist, accompanied by voice-in-your-head companion Kamiko. The dialogue takes a comedic tone from the outset, and initially it clicks. Most shooters take themselves a little seriously, so it’s nice to have a wisecracking, Deadpool-esque protagonist every now and then.

Lo Wang quickly goes low-effort blue, though, and the story begins to lose charm at an exponential rate. Flinging out expletives and slurs at an alarming rate, Wang’s chatter that peppered every gunfight becomes grating, and he’s far from the sort of endearing Wang found in the 2013 reboot. In that kickstart to the series, there were still plenty of goofs and gags, but driving the story was a solid, well-written motivation and narrative. All of that is missing in Shadow Warrior 2, where quests and story missions coalesce into a mish-mash of to-do lists and thinly veiled fetch quests.

Most of your quest givers run the typical gamut of wacky open-world characters, and it’s rare any of them comes across as intriguing or even likeable. Part of this disconnect also comes from the jilted animations, as characters seem to flop around on skeletons rather than act like corporeal beings. There’s no straight man to play off of, and every side character serves to ratchet up the blue comedy and uncaring, sarcastic tone of dialogue. Most times, I was waiting for the camera to leave Lo Wang’s perspective and point at him, just so he could wink at the camera after his third straight non sequitur “duty” joke.

This tone carries across to missions, which serve mainly as catalysts to move you through multiple combat scenarios. Most activities involve an amalgamation of shoot bad demons / robots and move to the next area, sometimes requiring you to pick up an object first. The instant teleport in and out of missions highlights this more – you’re rarely doing anything other than stabbing or shooting, and the game wants you to move as quickly between it as you can.

That pace ultimately begs the question of why a semi-open world, loot structure was chosen for Shadow Warrior 2 if it still wanted to stick to its roots. Where combat and pure carnage shine, and loot is an ancillary but effective addition, the constant running between quest-givers and managing missions seems arbitrary. There’s a lack of impetus or diversity in activity to vary it up like other loot games, and the less time I spend hearing Lo Wang and the menagerie of Shadow Warrior 2’s cast actually talk, the better. The structure and foundation is incredibly solid, so when the action gets held up by another bit or an overly long quest, the drag becomes noticeable. The loot-based shooting is top-notch, but the transition and traversal from mission to mission is rocky enough to tire out over time.

Co-op is a major boon to Shadow Warrior 2, because if it’s difficult for you to survive the onslaught of demon hordes or Wang jokes, it gets much easier with friends. Letting up to four friends team up and tear through waves of demon hordes gives Shadow Warrior 2 a Borderlands vibe, and it’s where the insanity feels most at home. Powers interact with each other in interesting ways, everyone gets to brag about new guns and loot, and loot-based games are always a staple for long-term co-op groups. If nothing else, Shadow Warrior 2 makes an effective addition to your co-op library if you’re looking for a new game to play at LANs.

Shadow Warrior 2 is a fast, gorgeous shooter with smart loot components, trapped inside a world and age that lost its luster ages ago. Where the core gameplay still feels fantastic, the story, world and mission structure gradually drag it down short of being a successor to the grandeur of its predecessor. An excellent shooter that could have used 99 percent less Wang.